The Consulting Analyst – The Rose Bride

The intro is here. ‘Hello, yes, welcome to Utena! Here is a lot of metaphorical flashbacks and a brief glimpse at our entire core cast, as well as intimations of their personal hang-ups! Also there’s a lot of ominous and seemingly arbitrary background detail! Do you feel overwhelmed […]

The Consulting Analyst – An Introduction to Revolutionary Girl Utena

Or a version of me. Possibly the metaphor I represent …Not me at all, actually Once upon a time, years and years ago, there was a little princess. And she was very sad, for her mother and father had died. Before the princess appeared a traveling prince, riding […]

The Consulting Analyst – The Woman Called Fujiko Mine (Part Two)

The intro is here. We come, at last, to the end of our tale. Let’s explore the last few revelations, posit a few ideas, and maybe get a bit heartfelt toward the end. In case we were too subtle, Lupin is here to lay out our metaphors

The Consulting Analyst – The Woman Called Fujiko Mine (Part One)

The intro is here. Nothing else matters even remotely, because this is the episode with the roller coaster fight and it is the COOLEST THING EVER. Also this is a two part finale, so there’s a bit more setup than payoff going on today. AND THEN THEY GO […]

The Consulting Analyst – The Feast of Fools

The intro is here. Token attempts will be made to discuss the other scraps of plot development going on this episode, but let us not pretend your humble analyst hasn’t been counting down the weeks until this episode. This week’s all about one character – the interpretive cornucopia […] 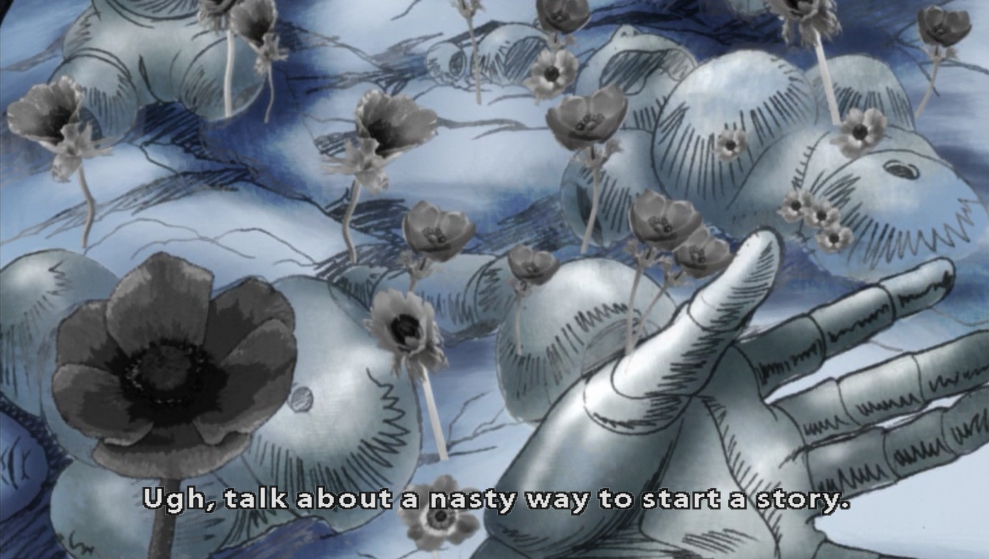 The intro is here. I will be forever unable to refer to this episode as anything other than “Lupin Goes to Silent Hill.” Having reviewed it with an eye for explaining what’s actually going on, “The Pretty Exposition Episode” would also be appropriate (if less catchy). Not a […]

The intro is here. Of all the shows I was expecting to have a requisite (surprisingly plot-integral, a la Outlaw Star) hot springs episode, this one was not it. This week: IN CASE WE WERE TOO SUBTLE ABOUT THAT WHOLE FEMINISM THING BEFORE The intro is here. People are getting horribly electrocuted and there’s a sudden abundance of owl people. We must be heading into the final third. That is not a fedora. It is an oversized noir sombrero Episode Specifics: A fortune teller has been predicting the death dates of […]

The Consulting Analyst – Music and Revolution

The intro is here. Have you found yourself wondering if there are any mostly-to-completely useless episodes of Fujiko Mine? Wonder no farther: it’s this one. But we’re going to wring some relevance from it regardless. Episode Specifics: Fujiko finds herself caught up in the political tensions of Carib, […]

The intro is here. Dear readers, we stand this week on a precipice. Here do we plunge into the surreal madness that lurks at this show’s core. Here we reach the character that I want to talk about most of all, wretched and pathetic and fascinatingly heartbreaking as […]