As VRV Blog appears to be somewhat of a defunct site at this point, I’m going to be migrating the pieces I wrote there over here in full for preservation purposes.

These days The Wicker Man is best known for its ridiculous 2006 remake, the centerpiece being walking meme Nicolas Cage. This is a shame—as much fun as a bad movie can be, the original 1973 Wicker Man is one of the unassailable classics of horror, mixing memorable performances and unsettling visual design with themes about religion as a personal versus societal force. It’s also got a way better, wilder story behind it than Cage’s famed bear-suit punching shenanigans—it was used as the key tool in a studio power struggle, was almost lost entirely, and its film stock may rest under a major British highway. 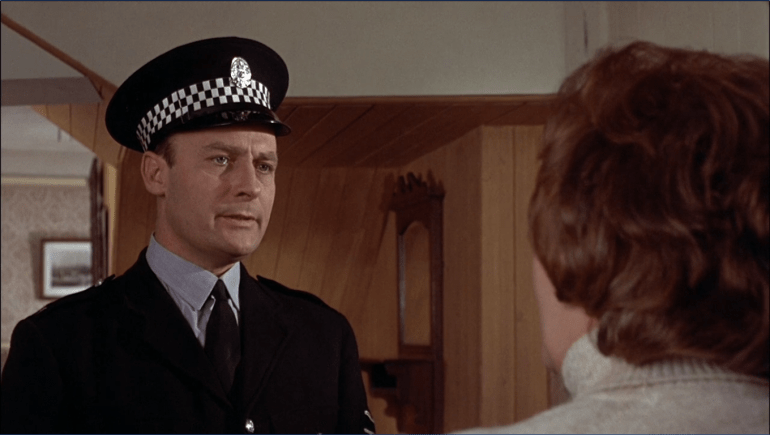 The Wicker Man is the story of a British police officer named Sergeant Howie (Edward Woodward, whom you may better know from the very deliberate callback to this film in Hot Fuzz), who travels to the Scottish island of Summerisle to investigate the disappearance of a young girl. But once there, he finds himself led around the nose by the island’s inhabitants, who’re preparing for their May Day festival and seem to know something he doesn’t.

The film was written over a single weekend by novelist Anthony Shaffer and director Robin Hardy, partly as a showcase for Christopher Lee—who believed in the project so much that he reportedly worked for free and late in life named it as his favorite role. Its production was finished with a budget of only £500,000. That’s roughly $1,250,000 in 1970s money—considerably more than micro-budget horror films like the original Halloween ($300,000) but still quite low for a film with on-location and several major practical effects. The Exorcist, by comparison, had a budget of $12 million.

There are lots of great stories about the filming—including the filmmaker’s initial plan to have college students score the film being vetoed by the school itself as “too distracting” and a contentious butt double. But the long and short of it is that the crew poured their heart and soul into the picture, which was compiled into a work print that supposedly ran for 102 minutes. And here’s where things get interesting.

The Wicker Man was funded by a small studio called British Lion under the oversight of Peter Snell. The company was in dire financial straits, and Snell needed a hit to save it. But before the film was finished, British Lion was bought out by shareholder Michael Deeley and fellow businessman Barry Spikings—and Deeley hated the film. Partly out of that hatred, and partly to paint Snell as a failure who needed to be shoved out, Deeley set out to bury the film.

He sent a print of the film to famed producer and schlockmeister Roger Corman, who suggested cutting the film down so that it could play as the B-movie in a double-feature. Thus, an 87-minute version of the film was cut and released.

Director Robin Hardy and Christopher Lee did their damnedest to promote it in the United States, paying their own way for a cross-country tour where they would show the film and answer questions afterward. Apparently, this involved a lot of church breakfasts.

And it worked—The Wicker Man began to grow a small but dedicated cult following in the US, fueled by word-of-mouth and good reviews.

By 1976, The Wicker Man had enough of a following that Hardy approached British Lion in hopes of making a Director’s Cut, but he was told that it would be impossible. Why? Because when Deeley stepped into power at the studio, he’d allegedly ordered whole swaths of old filmstock destroyed. Not just destroyed—the film was supposedly chucked into a hole under the M3 motorway. While likely just a cruel comment from a petty source, that urban legend persists to this day.

But in a strange twist of fate, the same man who’d suggested cutting the film down was the one to save the day. Roger Corman had kept the long cut of the film that was sent to him for review all those years ago. From this version, Hardy was able to reconstruct a 95-minute cut and screen it across America in 1977. This version was eventually made available on DVD and Blu-Ray as “the Final Cut” in 2013, with every home video release beforehand containing the 87-minute version.

The destroyed footage has left an air of mystery around The Wicker Manto this very day. A slightly longer 99-minute version supposedly exists on an archived video tape. Christopher Lee, who saw a screening of the film before it was sent for cuts, maintained that there was a full ten minutes missing even from the reconstruction. Musician Ian Cutler recalls scoring a dream sequence for which no footage seems to exist, though it’s easy to see where it might’ve fit into the film. But even as a supposedly “incomplete” story, The Wicker Man is a superb film. Its ability to carve out a place in the cultural consciousness despite multiple attempts to destroy it speaks to its potency.

There’s something poetic in seeing a film partially about how cultural context can make even a shared language “foreign” become the site of such a nebulous identity. Sure, we’re all talking about “The Wicker Man,” but which cut? What order of scenes? And, yes, original or remake? Regardless, it’s not to be missed for any fan of the genre—if nothing else, it’s worth seeing to pay your respects to a film that saw the light of day against all odds and even went on to become a classic, purely through the passion of its creators.

Tagged as: Movies, The Wicker Man