Llamas with Hats and the Death of Randomcore 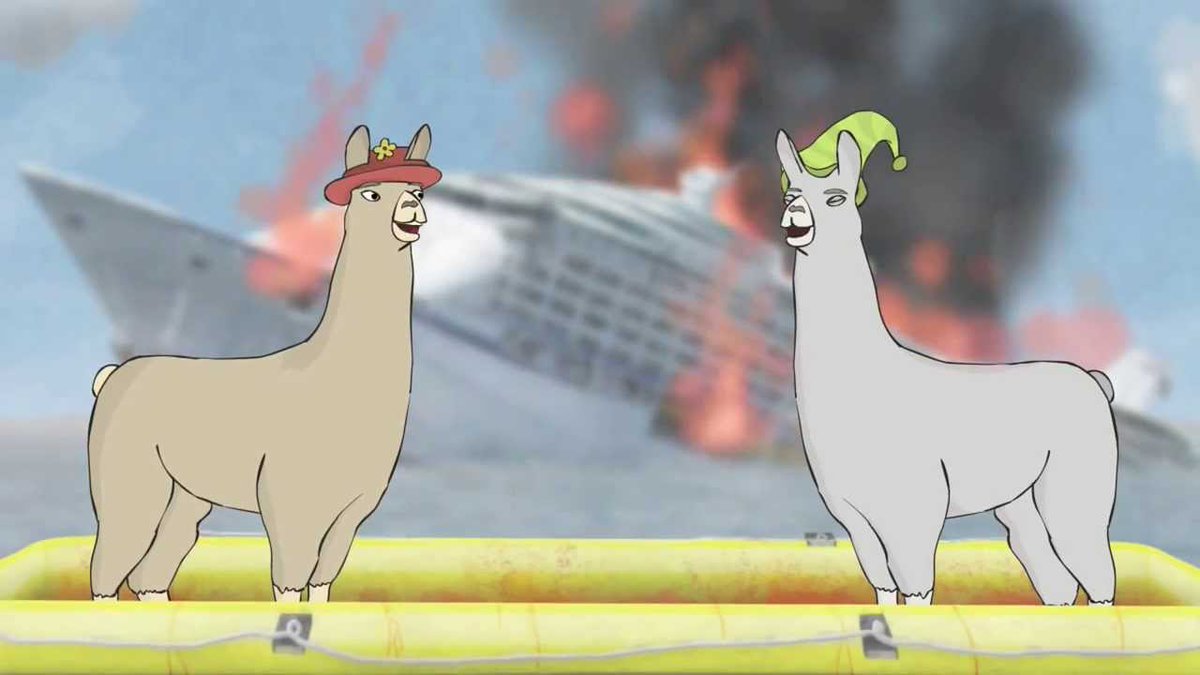 As VRV Blog appears to be somewhat of a defunct site at this point, I’m going to be migrating the pieces I wrote there over here in full for preservation purposes.

Waffles. Moose. Moose-eating Waffles. Did you see what I did there? LOL SO RANDOM, rite? Welcome to the internet in the 2000s, birthplace of a movement known as “randomcore”—an aesthetic style characterized by the juxtaposition of a rotten or nonsensical world with one “normal” observer, the grotesquifying of cute things, and absurdist humour taken to its crudest extreme. The aesthetic dominated internet culture for years, spawning countless now-forgotten Flash videos, launching the careers of some still-successful artists, and cementing the foundations of the post-millennium digital world. And there’s no better poster child of those wild times—from birth to inevitable decline—than the web series Llamas With Hats.

Back to the Past

Let me set the stage. It was the mid-late 90s—South Park ushered in new concerns about animation with its young characters and vulgar dialogue, and was only just becoming a major cultural force. “Think of the children” was born as what we’d now call a meme thanks to The Simpsons. And Tipper Gore’s backing of the Parent Resource Music Center—responsible for putting explicit labels on certain albums—and the national conversation about violence in videogames and television birthed its own countermovement online.

The Flash portal Newgrounds launched in 1996 and quickly became the place to go for edgy  animation and games. By 1999, the site had exploded in popularity with the release of Pico’s School, a disaffected response to the Columbine High School massacre at a time when such events were still unthinkable to Americans. Newgrounds quickly became a byword for cultural anxieties about young people and the evolving, still-menacing internet. 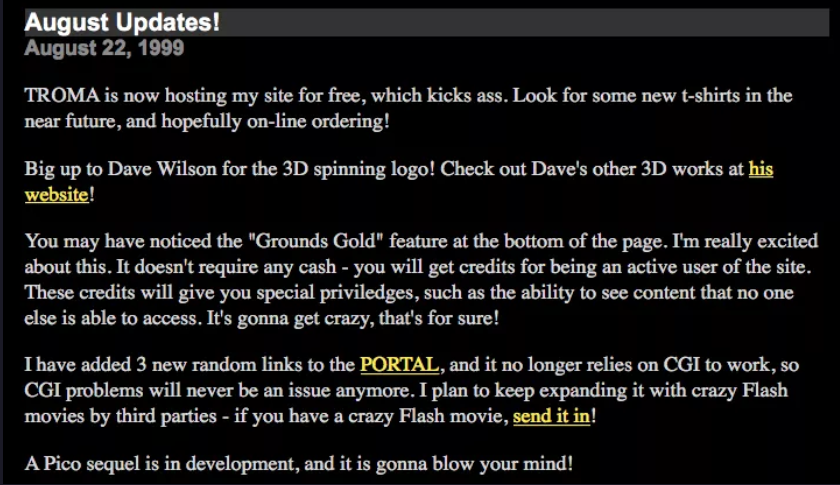 Simultaneously, indie artists like Jhonen Vasquez were writing comic series that juxtaposed macabre subject matter with an irreverent or comedic tone, like Johnny the Homicidal Maniac. The book resonated with readers, and Vasquez was approached to make a show about his character Squee, a supporting character from Johnny who had gotten his own spinoff series. But rather than hand over hand over the rights to his then-most beloved work, Vasquez opted to instead create an entirely new series for the network.

Thus, Invader Zim was introduced to an impressionable generation of 7-to-12s. Its style of bizarre, absurd humor and grotesque imagery, set in an ominous and threatening world that only a few characters seemed aware of or bothered by, became a juggernaut of nerd culture despite only running for 27 episodes.

Around the same time, pre-YouTube video hub eBaum’s World launched and became a major driver of internet humour. From the memes that lived on to be commercialized—cats with cheeseburgers—to those that went on to languish in obscurity, creators were producing content at an astonishing rate, building the foundations of contemporary meme culture. Truly, all your base was belong to them.

Perhaps because internet access and bandwidth was still so limited and hosting large files was still an expensive luxury, the most popular Flash animations, like “End of Ze World,” tended to be quite short. Get in, go for the throat, and get out while the audience is still reeling was the ethos of the day. As with all humour, surprise is key, and working within the technical limitations of the time, creators found that the easiest, quickest way to surprise was to be unpredictable—in other words, to be “random.” 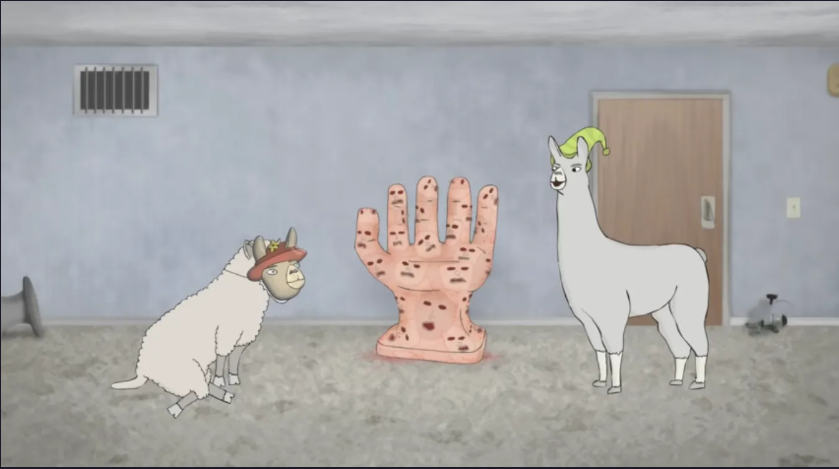 The Life and Death of OMGZZZ SO RANDOM

Randomcore flourished from the early-to-mid 2000s, even as the advent of YouTube began to further democratize video streaming. YouTube’s maximum video length was an initially gigantic-seeming ten minutes, a length far longer than the typical randomcore video style and pacing was equipped to handle. Other video types like longform Let’s Plays, YouTube poop, and the “Abridged Series” anime parody format boom began to flourish, introducing a different kind of humor shaped by the new platform. When YouTube extended maximum video length to 15 minutes in July of 2010, then began to remove length limits altogether, it was the death blow for an artistic movement that was already running out of steam.

Some creators managing to make the transition—Jason Steele and his popular series Llamas with Hats was one of them. Premiering its first episode in 2009 and concluding in 2015, the show began as a fairly typical example of randomcore that ultimately blossomed into a new style of humor.

The premise of Llamas with Hats screams randomcore: animals! That wear hats! And one of them kills people but acts like it isn’t a big deal! Each of the first four episodes is fairly short, dropping us into the obvious aftermath of a massacre as Paul berates his roommate Carl for committing yet another horrific crime in a high-pitched whining voice wailing ineffectually at a deep societal wrongness that only he seems capable of seeing. Standard stuff for the genre. 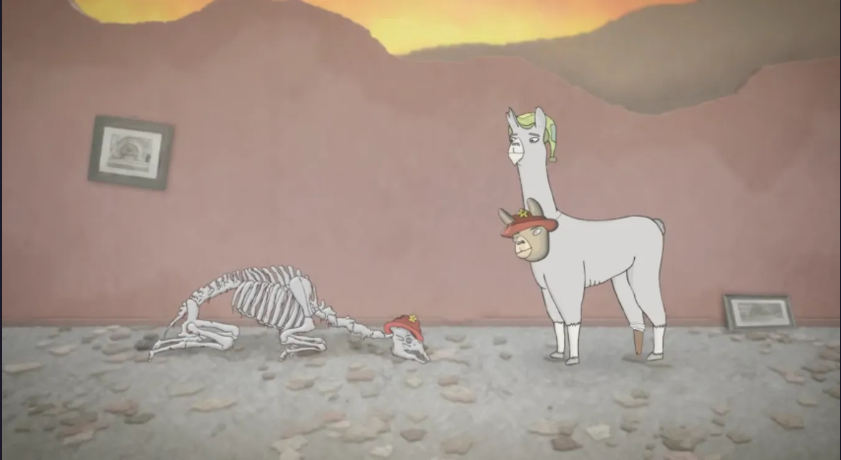 But then the series ran up against a problem: randomcore had been around for so long that it lost its ability to surprise. As creator Jason Steele put it:

The plan was to escalate things more and more with the final episode being the full destruction of Earth. After episode four came out, however, everyone had the fifth episode pegged. Most of the comments predicted that the fifth episode would see Carl “blowing up the Earth.” I was embarrassed that my plan for the series was that predictable. Llamas with Hats isn’t as funny if you know exactly what Carl is going to do next. So, episode five never happened. Llamas with Hats could have gone on forever. Like Garfield, or the Annoying Orange. Carl would do something bad and Paul would yell at him, over and over again for as long as people would watch. I could have written it well enough to satisfy most people, but it would never have had the same magic as the original episodes. The only way for Carl to continue surprising people was for him to actually do something surprising.

In order to make the series feel fresh, Steele deleted Paul from the equation. This shifted the series’ focus inwards—unable to distance itself from the upsetting, the comedy turns to interrogating and finding pathos within the monstrosity even as that deep sense of wrongness remains. None of us, post-randomcore seems to grasp, can truly be “outsiders” of the system when we’ve been marinating in it our entire lives—a realization that often means the absurdity comes with a strong horror influence,  anticipating series like Welcome to Night Vale or Don’t Hug Me, I’m Scared.

In the case of Llamas with Hats, it means we’re left alone with Carl and the fallout of his actions that had been offscreen for the first part of the series. The source of comedy shifts from the juxtaposition of horror and nonchalance to an uneasy laugh at one’s own discomfort. It’s kind of brilliant. Even years later, I’m somewhat loathe to spoil the actual beats of it for a prospective audience.

While it didn’t invent the post-randomcore aesthetic, Llamas with Hats charted the changing landscape of internet comedy simply by trying to survive in it. In doing so, it became both a unique viewing experience and a historical document of an artistic movement in danger of being lost to time because of the fleeting nature of its medium. So thank you, Llamas with Hats. For being frickin’ weird.

Tagged as: Llamas with Hats