The Lost Village is Definitely Bad on Purpose–But Why?

This essay was commissioned by Wendy Cannan. You can find out more about commissions here.

“Bad on purpose” is an extremely difficult sell. It requires a much higher level of shared knowledge than straightforward comedy—both because the creator must know how to replicate the hallmarks of amateurishness while still being proficient, and because there must be a viewer base that both recognizes the common pitfalls being parodied and the level of craft that distinguishes them from bad-on-accident. It’s an extremely risky gambit.

2016’s The Lost Village is definitely bad on purpose. Other writers have already poured plenty of thoughtful words into exploring this point, pointing out the awkward, clumsy framing and poor pacing from a director who has several very successful straightforward comedies (Shirobako, Bludgeoning Angel Dokkuro-chan)  to his name. Likewise, bringing in screenwriter Mari Okada—quite famous for her talent at writing Raw Angry Emotions that can quickly slip into melodrama under the wrong direction—to give the series a specific voice after the broad details of the series had been sketched out speaks to a decided canniness in the production process.

I can recognize and respect the strengths that fueled the creation of The Lost Village. I can see why it built up a passionate fanbase among people who were watching it week to week, happily chatting with one another as to what weird thing the show was going to do next. But coming to it almost three years after the fact, removed from that context, I’m left with a unique postmortem. Despite, or perhaps because, I have a heart that beats passionately for sincere schlock, The Lost Village leaves me somewhat cold.

The inevitable subjectivity of comedy aside, this comes down to two factors: the scope of the writing and the context of the medium. As I mentioned above, Okada’s writing can be a little bit all over the place. While she hardly fits the brittle, exacting image of an auteur and seems happy to help a director bring their particular visions to life, there are several indisputable tics to her style, and a few core themes that crop up in her work, particularly projects either wholly or semi-anime original.

The first is those big emotions, which are well-suited to a show that wants to deliberately treat pointless issues with grand importance. The titular village is a kind of discount Silent Hill, literalizing characters’ baggage and thus giving them a chance to physically confront their demons. Some of the reveals of those demons (rendered in adorably clunky but also crucially still uncanny CGI) are right on the mark in terms of absurd pettiness—the military recruit who got a silicone injection in his head so he’d meet height requirements and is thus tormented by a giant turd-shaped boob is, in fact, amazing. Some of the conversations, like debating over whether anti-ghost weapons will be effective, is likewise genuinely funny.

But some members of the cast do have genuinely dark backstories. That doesn’t mean they’re completely impossible to mine for dark comedy—there’s a certain point at which miserable events pile on to such an extent that they become absurd, or the writing conveys itself as artlessly shocking for its own sake, a la Yuno in Future Diary—but the stories of parental abuse in Lost Village, at least for leads Hayato and Mitsumune, wound up feeling pretty close to grounded. 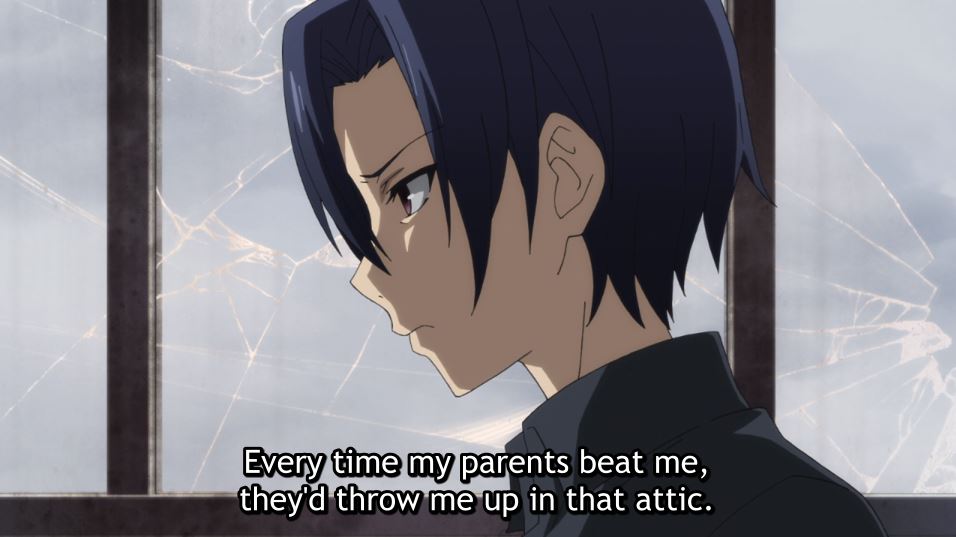 On this point I have an additional bit of insight that those watching the series at the time didn’t: Mari Okada published an autobiography in 2017 that included discussion of her troubled childhood, including her mother attempting to kill her. I came into this 2016 anime knowing that fact, and it distinctly colored my viewing experience of the second half.

Children struggling under the shadow of abusive caretakers shows up frequently in Okada’s scripts, whether it’s here, Black Butler II, or The Woman Called Fujiko Mine. And while I might be biased by outside knowledge, the potted examples of Hayato and Mitsumune’s backstories (Lovepon has a different issue, with a very Anime Abuse Backstory that’s neither grounded nor sufficiently heightened into absurdity) felt more deliberate and cohesive than the rest of the show—a genuine attempt at sincerity.

While the writing and framing generally worked in harmony toward absurdity, they suddenly seemed at odds. Yes, Hayato clumsily infodumps his entire tragic backstory while standing awkwardly in a room….but the emotional logic of a child stifled by controlling parents seeking someone else to control is solid. Despite the dumb, flappy penguin and giant grandma monster, the final confrontation about their friendship felt like it had heart.

That one little plot thread managed to hook me, because I felt actual emotions behind it. For me, having an isolated rather than communal viewing experience, the first half was a hellish drag that took me weeks to complete. But the second half flew by, buoyed by an actual attempt to make me give a shit about some of its characters…and also the adorably out of place CGI bus.

But at the same time, those beats of sincerity felt at odds with the overall bad-on-purpose ethos, a connection “in spite of’ rather than “because of.” Here, the mismatched quality of writing versus deliberately clumsy framing felt accidental rather than deliberate, slipping off the tightrope and neatly breaking the series in half. On the one side, a tightly-made bit of deliberately alienating non-horror; on the other, a bombastic scriptural mess now dragging the still clumsy but less fitting framing behind it like a broken chain.

Looking back at the colder half, I found myself thinking, “what is this for?” Some of the best examples of deliberate clumsiness are in service of satire: This is Spinal Tap has chilled many a musician forced to listen to those crappy songs, What We Do in the Shadows deliberately trivializes, with love, the grandiosity of the vampire genre; and Hatoful Boyfriend turns the absurd high drama of visual novel concepts into an unblinkingly serious insistence that the viewer date a bunch of literal birds.

All of those examples are needling takes on extremely successful industries with long histories of doing ridiculous things seriously. They’re big, expensive, and long-running enough to stand a little bit of puncturing. I’m not sure that standard applies to Lost Village’s target of choice.

“Wildly successful” is not exactly the word I would use to describe anime horror series. They’re few and far between in the grand scheme of things, usually plagued by pacing issues, and almost never able to rise to the level of being actually scary. The best of them already live in the realm of endearing incompetence that makes “so bad it’s good” media appealing. Mizushima himself already made a contribution to that ilk with 2012’s Another, which threaded the needle of absurd idiocy with genuine tension for a bulk of the runtime.

The Lost Village, at least in terms of its framing devices, doesn’t want the audience to give a damn about its cast—it’s an inevitable symptom of its deliberate anticlimaxes and piecemeal pacing. The joke is that nothing resolves satisfactorily…but it can’t keep up that alienating effect all the way through, thanks to that sometimes-genuine feeling writing.

Which, ultimately, shoots the experience in the foot. Once I became even a little invested in the characters, it grew harder to archly appreciate the show’s deliberate, almost Brechtian construction. I wasn’t archly amused that the obvious close-ups of detective Nanko holding her stomach never went anywhere, I was annoyed because I genuinely wanted to see more of her character and her burgeoning friendship with Lion and MaiMai. Because the back half slips more genuinely into real, off-the-walls sincere badness, the early coldness began to seem less like a thought experiment and more like contempt.

That concept of endearment is crucial to this kind of endeavor. All the examples I listed above contained a high degree of skill and incisiveness in mocking their respective genres. But they also had genuine affection for their characters from the word go, giving the audience a reason to invest even while pointing out the absurdity of the genre mechanisms.

Ah, but there is plenty of enjoyment to be found in messy, dumb shows about awful people, being executed badly—The Future Diary exists, after all. The endearment in that case comes from the audience to the crew. Mockery can be meanspirited for an episode or two, but that kind of enthusiasm tends to wear off quickly. People who watch a bad show all the way to the end tend to have at least some level of fondness for it. If not for the characters, then out of sense that the crew is really trying their best and just…failing. Failing so hard, for whatever reason.

Full Moon Entertainment, for example, is a company whose entire bread and butter comes from making D-grade movies about killer creatures no higher than your knees. They are stupid, cheap films that are decidedly capable of laughing at themselves, but they’ve earned themselves a fanbase by pouring sincere effort into their projects. It is their thing, and they believe in it. While there are limits to that kind of goodwill (hi, Bethesda!), it can go a long way if the creators treat their fans with love.

The experienced crew of The Lost Village is skilled and versatile, choosing to be clumsy rather than blustering into it. They aren’t, predominantly, horror storytellers. For me, at least, it feels like them coming in to kick an anime genre that’s already anemic and rarely, dubiously successful. This is not uncommon in horror across mediums, and it always sets my teeth on edge given horror’s status as a consistently denigrated genre. There’s plenty of people lining up to kick these kinds of stories. If you’re gonna do it, you’d better bring you’re a-game.

The fact that Lost Village can’t maintain that momentum all the way through, which would normally endear me to it as an enthusiastic fuckup. Instead, I found myself thinking “yeah, not that much fuckin better than what you’re making fun of, are you?” In the end, the parts of the show that stuck with me were the bits that seemed accidentally sincere, like the underlying theme that one’s psychological baggage is key to what makes someone a full, human person. Or, as I put them in my notes, the “GODDAMN, OKADA” moments.

While I don’t doubt the show was intended as comedy, I’d rather ride with the unintended, completely bizarre rollercoaster of something like Samurai Flamenco. Even when those kinds of shows are dumb, unsuccessful, or out-and-out problematic, I never feel like they’re mocking me for being a fan of the genre.