Requiem of the Rose King Nails Transmasculine Dysphoria–at a Cost 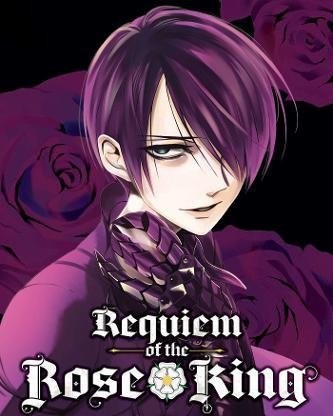 Requiem of the Rose King was initially pitched to me as “lulzy queer Shakespeare fanfic with an intersex protagonist.” There’s basically no faster way to get me to pick something up. While I did burn through the first seven volumes (of an unknown planned number; the end of seven implies the story is at about the halfway point) in record time, the journey was much less of an uncomplicated laugh riot than I’d been expecting. Parts of this series struck me to the core and remain with me even now, but they’re complicated by some dubious and arguably outright harmful writing choices that I can’t simply put aside.

(Content warning for discussion of transphobia and sexual assault)

The manga is based on Richard III, one of my personal favorites and a play rife with opportunities for adaptation. The play itself is famously a hit job—Shakespeare was in the employ of the Tudors, whose ancestors overthrew Richard Plantagenet, so it would’ve behooved him to cast the king as an above-and-beyond villain. The actual historical figure was probably not a great guy, because none of these kings were, and he did have a spinal curvature from scoliosis; but “gleefully murdering half the cast while skulking about with a pronounced hump and sinister withered hand” is a bit much.

That ambiguity leaves plenty of room to reinterpret Richard as a sympathetic tragic figure, which is clearly where Rose King’s heart lies. We begin with Richard as a small child, shaped by a mother who calls him a “demon” (hold that thought) and a father whose traumatic death drives Richard and his brothers, and follow him to adulthood with a keen eye toward watching him struggle between his desire to avenge his father, his own bitterness at his outcast status, and his desire for human affection. While Shakespeare’s Richard is a choice role for many an actor, this version is far more Byronic hero than outright villain.

There are other influences in there too which color the tone of the story: a dash of Cantarella in the ubiquitous demon imagery, a pinch of Kaori Yuki in Richard’s overly worshipful adoration of his dead father, and a little bit of Fushigi Yugi in the “you tried but yikes” gender politics (except way less excusable because Kanno is 38, not 22, and it is no longer the early 90s).

But the manga is undeniably influenced by Shakespeare most of all—an early author’s note mentions being taken with the poetry of a particular translation, and the issue of “deformity,” or the perception thereof, is central to Richard’s struggles. Which leads to the manga’s biggest double-edged sword: rather than having a spinal curvature, this Richard is intersex. 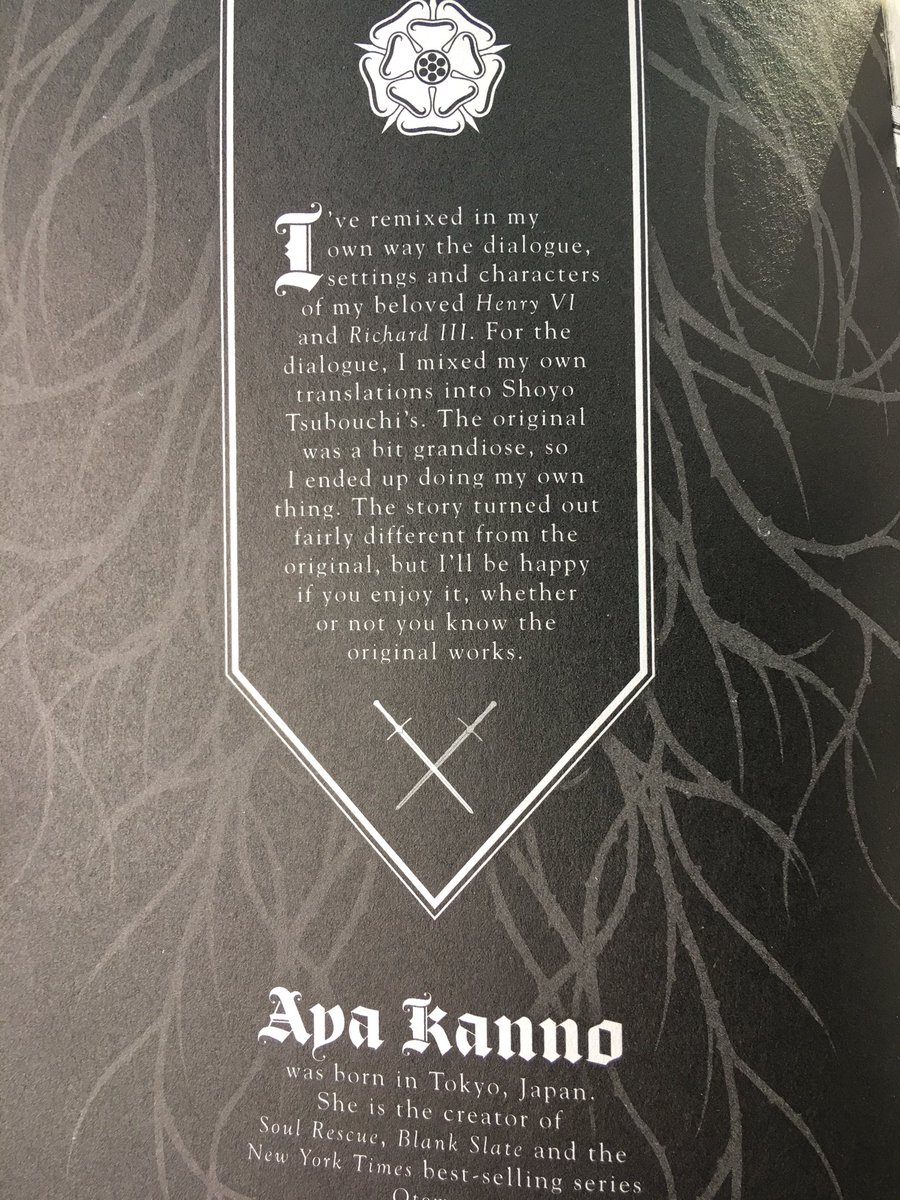 It’s possible you already see the problem with this, particularly if you’re familiar with the play. Richard’s most famous soliloquy, which opens the show, includes the lines: And therefore, since I cannot prove a lover/To entertain these fair well-spoken days,/I am determinèd to prove a villain/And hate the idle pleasures of these days.” Or, basically, “because I am so hideous no one will touch me, I have dedicated my life to shit-stirring.” There’s a reason the two most famous adaptations of the play involve making Richard a literal Nazi and a devious politician played by a sexual predator—he’s more incel than tragic lover, if you feel me.
So there is a backdrop of this so-called deformity being the reason Richard is such an evil character, coupled with replacing the already problematic physical disability with a nonstandard sexual characteristic. And then, on top of that, you’ve got the demon stuff. The closest to an outright uncomplicated villain in the story is Richard’s mother Cecily Neville, who at certain points seems to exist only to pop up when Richard’s in danger of being happy and drive home his insecurities yet again. He’s a cursed child, a demon, was born a “misshapen lump,” and so on.

It’s relentless, and underlined by Aya Kanno’s choice of thematic imagery: Richard is surrounded by thickets of thorns and plagued with devil imagery, and in one sense they’re masterfully chosen and versatile art decisions that encapsulate Richard’s personal issues, the prominence of religiosity among various characters, the rose symbolism of the Tudors and Lancasters, etc. On the other hand, it is a very difficult to portray a character persecuted unjustly by their society, with issues they’ve internalized,  and not fall into propping up that narrative or fetishizing the character.

Kanno just isn’t qualified. I came away from the manga honestly unsure if Kanno knows that intersex people exist and have feelings and lives not crushed by constant tragedy, or if she just read about demons with multiple types of genitalia one day and thought SURE SOUNDS GOOD. Manga discussing gender often fall into essentialism that links gender to sex characteristics, and while this isn’t nearly as bad as the truly loathsome After School Nightmare, it frequently falls into the same trap.

Because much of the story is centered around Richard’s romantic feelings for his two love interests, much talk is had about whether Richard loves someone “as a man” or “as a woman,” as if the only way to explain queer attraction is to have some secret part of yourself that makes it heterosexual. And the story also trots out attempted rape in order to rip Richard’s clothes to show his breasts and have a character verbalize that his genitals are atypical. It’s a cheap trick that loves to fetishize the otherness of Richard’s body, almost nudging the audience in the ribs to say “hey isn’t this WEIRD” while ostensibly claiming the high ground over Richard’s tormentors.

It’s not a positive portrayal of an intersex character—whether it is at all a relatable one I can’t speak to, since that’s not my experience. But I would caution readers heavily if they feel they might be triggered by that content. Which should, theoretically, be the end of it. Except for the other part of that double-edged sword I mentioned. Because this manga is acutely, painfully, if maybe even accidentally good at portraying the agony of transmasculine dysphoria. This is the first portrayal of a transmasc character to hit me this hard since Wandering Son. 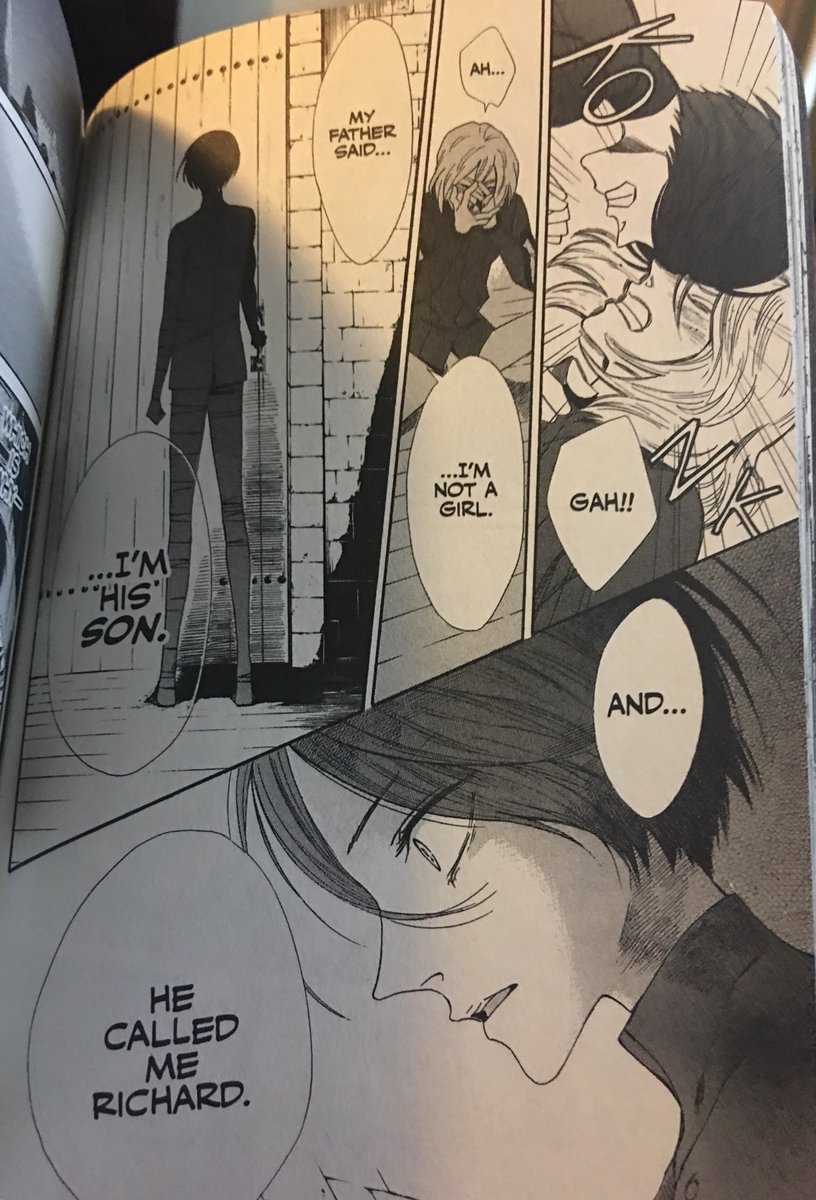 Richard’s monologues about his hatred of his body, the way those around him code it, and the ways it limits his social interactions are raw and ugly in a way that rings startlingly true. It isn’t a nice or positive emotion, but there is something powerful in seeing your dark thoughts on the page in a way that expurgates them and makes you feel less alone. Richard struggles with his bisexuality, and whether his partner’s gender will change how others think of him. And his temporary triumph of being able to wear a dress for plot reasons while still confidently knowing himself to be a man is strangely uplifting.

Kanno even puts the usual hurtful rhetoric that tends to show up in these kinds of stories—“I know you really wish you could be a woman” and “Richard will never love you because you’re a woman (and I perceive him as one)”—into the mouth of a blustering idiot who spends his entire screentime with no idea what’s going on before blundering into death and making everyone’s lives worse. Again, I truly cannot tell if these are moments of surprising self-awareness or simply luck. But they are appreciated, whatever the reasoning.

It resembles, in some ways, the novels Poppy Z. Brite wrote before he transitioned. Personal anger at being called a woman when you’re not one becomes a hatred of all things feminine, which bleeds out into revoking female agency, coding feminine things as frivolous, and uplifting female characters who display masculine-coded traits as superior.

Lo and behold, Rose King’s women get a raw deal. Anne Neville (who is adorable and charming, and whose relationship with Richard gets one hell of a scrub job to make her a plausible love interest) is marked out by her Not Like Other Girls interests of horseback riding and chess, and the women who use tools of seduction to make their moves in court (y’know, one of the only options open to them?) are painted with considerably less sympathy than the conniving men of the court. While the story is attempting to show everyone as being flawed, the men always get the most benefit of the doubt. 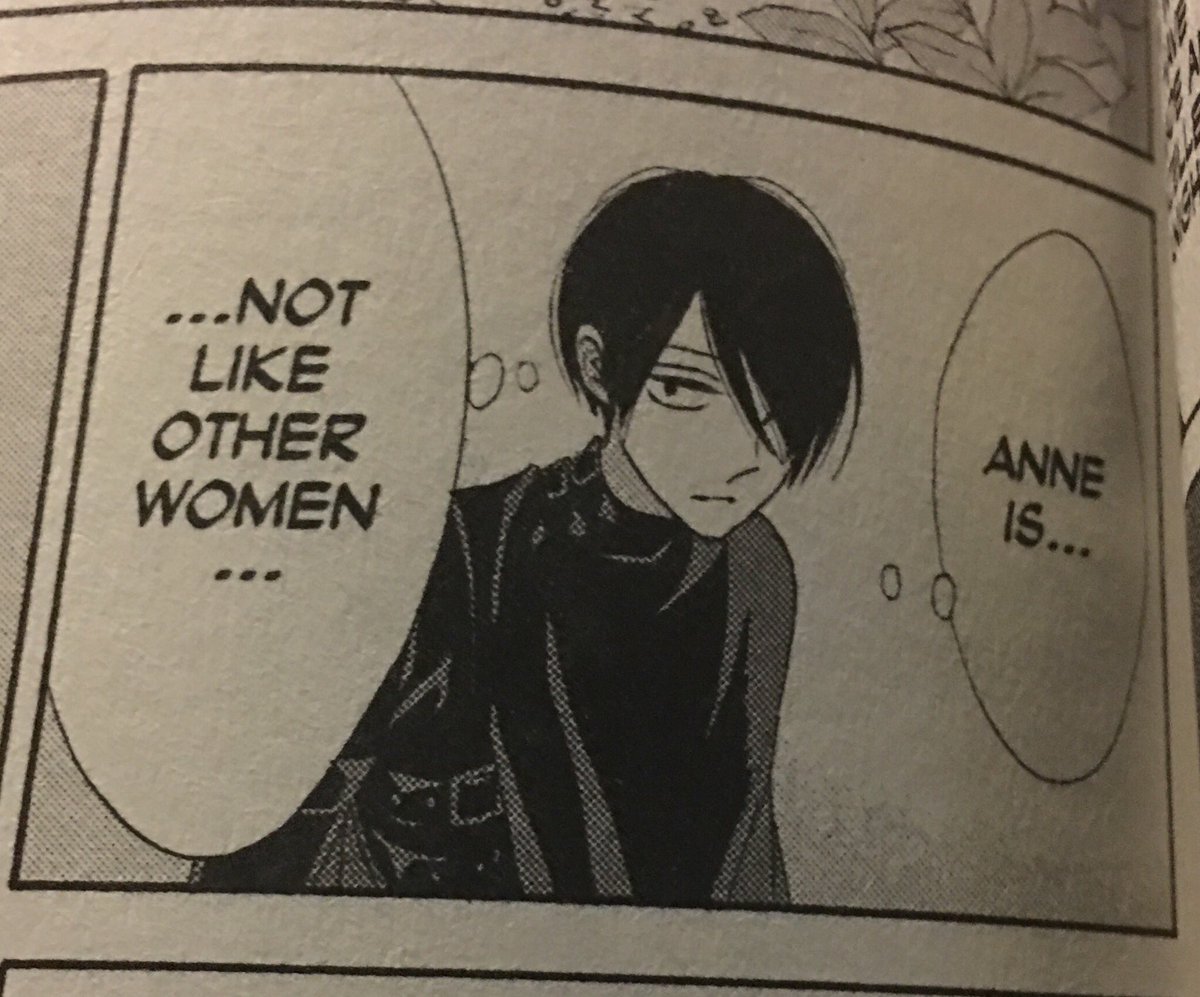 It feels like a dubious tradeoff for that pointed realness. In Brite’s case, it’s the case of an author’s personal struggle writ large across the story. With Rose King, lacking knowledge about Kanno’s personal life, it feels a little more like internalized misogyny. And as someone who’s moved past those particular ugly internalized assumptions about femininity, it’s saddening to see that this manga lacks the skill to capture those accurate feelings of dysphoria without replicating the toxic worldview that often comes with them.

Every element of the story is like that in some respect, twinning a surprisingly insightful or appealingly trashy gothic element with something ugly. Richard’s love interest Henry is literally old enough to be his dad and they cross paths for the first time when Richard is a teenager…but they don’t strike up a friendship and tentative romantic interest until Richard is an adult, and Henry is portrayed as extremely emotionally arrested due to trauma. Henry’s fear of women is partly explained as being because his goshdarn momma was a whore who didn’t love him…but he and Richard also form an unspoken bond over their status as assault survivors, and Henry’s rape at the hands of his wife is given is treated as serious and horrific.

On and on and on. It makes the story an engrossing but frustrating experience, which often carved chunks out of me while also leaving me feeling bitter and annoyed. It’s too often true to simply be the laughable pulp it was sold to me as, too often insightful in the difficult topics it broaches to be simply appreciated for its outlandish storytelling and gothic stylings. But neither can I give it up, even as volume seven drove home the realization that the story is going to be an increasingly punishing march to Richard making every possible bad decision before dying at the young age of 32.

I can’t stop reading this damn thing. Parts of it are going to stay with me for a long, long time. But I’m not sure if I’d recommend anyone else take the trip.

Tagged as: Manga, Requiem of the Rose King