This series is made possible by a commission from Frank Hecker. You can find out more about commissions here.

“if the outcome of a situation is happy, this compensates for any previous difficulty or unpleasantness.”

Origin: possibly in the middle ages, with Shakespeare’s play of the same name.

While Kotetsu’s life just about hit rock bottom in this episode, it ended with him meeting the man who’d save his life.

In Short: Sternbild is a city in which superpowered individuals exist; in fact, they’re reality tv stars, capturing criminals for points. Kotetsu T. Kaburagi AKA “Wild Tiger” has been in the game ten years and is more and more being dismissed as past his prime. When the company sponsoring him gets bought out, Kotetsu becomes the property of Apollon Media; and the only way to avoid losing his job is to accept being teamed up with young upstart Barnaby Brooks Jr.—a hero with no secret identity and the same powers as Kotetsu.

Welcome back to the city of Sternbild, and a reminder that if this is your first time, these recaps will contain spoilers. This remains an eye-catching premiere, working hard to introduce a lot of worldbuilding concepts and characters while grounding the viewer in Kotetsu’s state of mind. Some of it doesn’t work—this is the only time the series really blatantly and lazily falls into depicting Nathan as a 2D stereotype, and the CGI in the opening car chase is starting to show its age—but for the most part it’s a smart way of hooking the audience into the emotional truth of the world, throwing out a lot of information but rooting it in character drama.

I’m not going to attempt to cover everything that first appears in this episode, particularly if it pays off in ways we can discuss more later (i.e. Blue Rose fighting with her manager), but I do want to touch on a couple general things to keep in mind going forward.

One thing to keep in mind while you’re watching the show is, despite the technological advancements, this series is actually taking place in an alternate version of the 1970s. The pin that Kotetsu buys for Barnaby, which features prominently in this first ED despite not showing up until the second half, reads “NC 1978,” meaning that this first episode takes place in 1977. Explains a few things about the fashion, particularly Barnaby’s Farah Fawcett curls and huge shoulder pad suits, doesn’t it?

This also means that when Maverick says “NEXT first appeared 45 years ago,” he means roughly 1932. Sadly, despite my cross-referencing, this doesn’t line up with any significant dates in superhero comics (Detective Comics #1 was 1937, Action Comics #1 was 1938, and the famous photograph of Watchmen’s Minutemen was 1940), but it is in the right decade. The show’s hardly short on superhero homages, after all: many a savvy viewer has pointed out that “hero with sponsors” describes Booster Gold quite handily, and you may have noticed that the series’ brassy main leitmotif bears a striking resemblance to The Incredibles (which gets an explicit shoutout in the next episode). And to be fair, it’s probably best not to trust anything Maverick says anyway.

Possibly the most interesting thing this time around is the way the Hero TV crew is written. While Agnes’ personality is in check and her two associates are there, it almost seems like the series wasn’t quite sure whether they were in on the secret/rigged nature of the show—when the rail is hijacked, director Cain Morris (aka poofy hair guy) asks whether they should do something, and trails off on “it’s best not to interfere with…”

We ultimately find out they’re all in the dark (and pointedly don’t find out exactly which criminals knew how much and when, how the crimes were contained, or much of anything about Maverick’s operation), but it’s a plausible seed to be setting up, especially with Agnes’ borderline ratings-related sociopathy not yet being played for comedy. 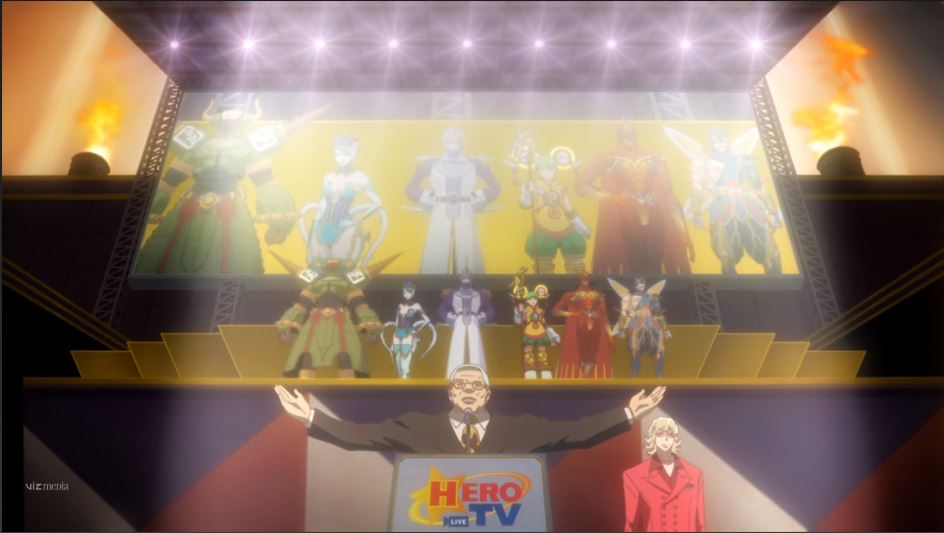 The first princess carry: It seems like it was so long since Wild Tiger has last worn his old suit. This princess carry was the start of their love.
[Note: Yes, they use the word 馴れ初め “naresome” which means beginning of a romance.]

Q: What themes influenced the creation of the story?

Nishida: From the beginning there was a possibility that the anime would air in the evening, so I started thinking about a story that I always wanted to create – something that would appeal to both young and old, men and women, something just in the middle. When it comes to the story and the appearance of the world, I wanted it to be straightforward and fast and exciting, but at the same time I wanted the characters to be seen doing things from their daily lives, so that the viewers could feel closer to them. It was one of the things I paid extra attention to.

Q: Tell us some interesting points of the characters you created.

Nishida: The problem with Kotetsu is that he’s a very charming man so it’s easy to accidentally make him appear too cool. So for a long time I wondered what not-so-cool flaws he should have. I believe the interesting point in the second cour might be the feeling of distance between Kotetsu and Kaede when he visits her back home.

It’s somewhat tough to tell if this gag got more prominent because the fanbase latched onto it, or if it was something the crew planned from the start, but this episode features the first appearance of “Scarf-tan,” a redheaded background character who seems to be constantly in the path of danger. You can see her here as a passenger on the hijacked monorail.

If you watch this on Hulu, you may notice that after the OP there’ll be 30 seconds or so of a screenshot with music in the background. This is the sponsor card, which usually gets cut from streaming broadcasts. In T&B, it’s included but left blank, because the heroes are wearing the real-world sponsors on their suits.

This is also the first appearance of Fauxnan O’Brien (technically his name is Mario, but nobody knows that; I didn’t even know that), the most prominent but definitely not only instance of the show modeling minor characters after western celebrities. Well…maybe the second most prominent.

Since T&B was made partly to speak to older fans and former anime fans, it’s only natural that we’d begin with Kotetsu. Our woebegone hero is a relatable figure indeed—while he’s clearly designed to speak to older viewers who feel unwanted in the work force, I would bet many a freelancer can relate to the brutal “if you don’t like it, you can quit” conversation with Lloyds, and the show is squarely speaking to the market crash of the late 2000s (even if Kotetsu still has an absurdly huge apartment). The glimpses we see here are of a guy doing his best, with genuine compassion for those in trouble and a dedication to his job—as Nishida points out above, he’s a charming man.

And because he is so charming—the fandom was quite taken with their moe oyaji, believe you me—I kind of want to focus specifically on his flaws. Kotetsu is a great character, and I don’t want to discard his many evident charms (this role redefined Hiroaki Hirata’s career in a lot of ways, and for good reason; lines like “was I the only one who didn’t know” are already gut-punchers). But he’s also kind of a mess and a fuck-up, both in ways the show intends to highlight and ways it doesn’t.

Several interviews mention that meeting Barnaby was a turning point in Kotetsu’s life, and nothing drives that home in retrospect like the many, many bottles and beer cans scattered around his apartment. This could be an indication that he’s a messy person, but notably none of the rest of his apartment (that we see) is out of sorts. The floors are clean, the kitchen is sparkling, there’s no laundry on the floor. It’s just the alcohol. Considering his job, it’s amazing Kotetsu is as functional an alcoholic as he is—and if things hadn’t turned around, it seems quite possible he would’ve just drunk himself to death. 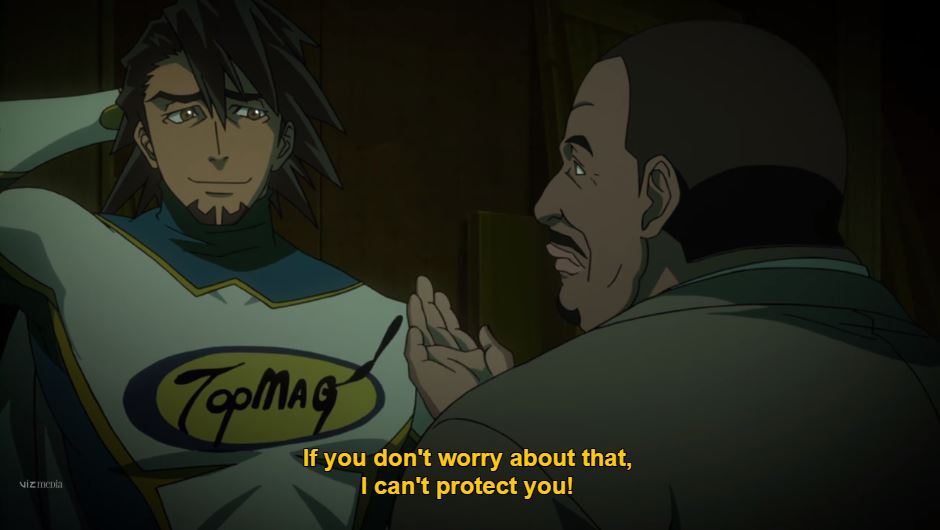 He’s also kind of a terrible friend. It’s a good thing that Barnaby is so dogged and so blunt, because the way Kotetsu shoves both Antonio (Rock Bison) and Ben away is…well, it’s definitely a familiar sign of depression, but also something he continues to do throughout the series. Antonio in particular gets ditched whenever something better comes along, and Kotetsu leaves him in the lurch to make excuses for him more than once. Perhaps this is symptomatic of the pair being longtime friends who went to high school together (thanks Drama CDs!). It’s easier to take a friendship for granted when it’s been around forever.

Outside of character actions, one thing we’ll definitely be keeping an eye on is the fact that Kotetsu is a wish fulfillment character. Sometimes the show handles this with grace, such as questioning his views on what heroism is; other times it softballs those issues, like that damn unresolved martyr complex; and other times it has a big old blind spot—primarily when dealing with the cast’s young women. The tension between wanting to offer a fantasy to the older (male) viewer and wanting to tell an honest, down-to-earth narrative amongst all the superpowers contributes to some of the show’s weaker moments, so keep it in mind.