The Arcana: Inclusive Fantasy Dating Sim With a Side of Murder

The market is tough for those making mobile games—poor App Store formatting, a deluge of burner apps that have little-to-no functionality, and increasingly predatory free-to-play mechanics have made it difficult to find the games that are worth your time. On the other hand, it means that when you do stumble onto a hidden gem, it feels all the more like a treasure.

Enter The Arcana, a free-to-play dating sim set in a fantasy land of magic and tarot. In addition to kissing some eligible suitors (currently three, with three more planned if the game does well), the player will solve a whodunnit mired in courtly intrigue. While it’s difficult to judge an ongoing narrative (new chapters are added roughly ever six weeks), what’s available is both charming and intriguing. Did you like Red Embrace or Hustle Cat? This is probably for you.

The game works like this: players choose a name and pronouns for the protagonist (who is never physically described but isn’t quite a blank slate—think Hatoful Boyfriend), then play a prologue that introduces the major characters and conflict: a year ago the Count, Lucio, was murdered; the Countess intends to catch the murderer with the help of your magical apprentice. 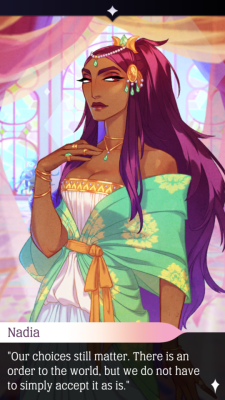 From there, the game divides into routes. Rather than being automatically put onto a character’s story because of choices made in the prologue, the player is allowed to choose who they pursue, or even to work on multiple routes simultaneously. In fact, the narrative seems to be structured with the intent of playing that way. While each route exists in a parallel universe, the information you discover across those stories informs one element of the mystery. Countess Nadia will open up the machinations of the court. Magician Asra knows about the secrets of your past and the ghostly rituals at work. And disgraced doctor Julian is at the heart of the murder mystery.

You may learn certain things in one route but not another, but they remain true across storylines—it’s puzzlebox plotting in a way that suits the format, giving a different feeling to each character’s romance while creating a cohesive central narrative. And for an extra bit of fun, it’s not just the protagonist suffering from a customary bout of Videogame Amnesia—all of the major characters have big ‘ol blank spots in their memories.

The answer will be the same, but the way you come to it and what you understand might be different. What exactly that ending will be remains to be seen. Ten “books” have been released so far, each themed after one of the major arcana, and while the plot seems to be heading to a climax with the most recent chapter, the devs haven’t announced how long the finished game will be. If the goal is to cover every major arcana, then the story is only about halfway done.

To keep players coming back between plot updates, the game employs several secondary games: the Wheel of Fortune lets players spin for coins or trinkets, the latter of which unlock extra scenes once you’ve collected enough; tarot readings are exactly that, with each love interest offering a different style of reading (Love, Happiness, or Success); and the recent Heart Hunter addition is a mini-board game that unlocks romantic postcards and rewards.

They range from freemium filler to nice content additions, the kind of thing that keeps rate of return up and keeps up-to-date players from deleting the app. For players who are early adopters, the system is well-balanced and leaves plenty of time between narrative updates to save up coins and other rewards via free rolls/refills. Latecomers, however, are faced with a lot of content and a very long wait if they don’t want to pay. The keys might refill once every day, but a chapter only takes about 20-30 minutes to read. Which means knowing that the next update is there and staring at it in agony, or shelling out the cash. 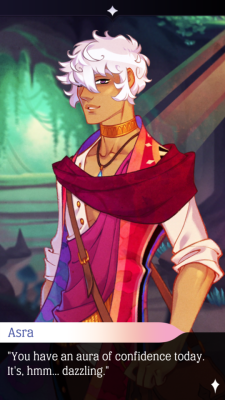 The Arcana’s paid currencies are divided into two subsections: keys, which unlock chapters in the plot; and coins, which are spent on additional in-story scenes and side features like tarot readings and the wheel of fortune.  The key counter makes out at three (the number it takes to read a chapter), and you can either wait for keys to return naturally once a day (eight hours per key), or pay a dollar to refill all of them.

This is pretty reasonable as far as free-to-play games go, and I spent probably $10 to blitz through the story content in a couple days. It marks the first time I have purchased microtransactions in the entire history of the app store, and I don’t regret it—this is a well-made game by a two-person development team, and I’m more than happy to do my part in seeing it succeed. These kinds of small but microtransactions are a reasonable tradeoff for making the game free to play—itself an understandable business move for attracting younger audiences.

There is not, at present, any plan that I could find to release the game as a complete product with a flat price. Which is a shame. As I played, I found myself wishing over and over that I could simply pay $30 up front and unlock access to all character routes and story content, and then complete it at my own pace. This is where the game’s other currency, coins, becomes something of a problem.

Keys, you see, are a one-use item. Unlock a chapter with a key, and you’ll need to spend another key if you want to read through again and make different choices. However, you can permanently unlock a book, including all of the locked extra scenes within it (which are where basically all of the extra romantic stuff happens), for 500 coins. That equates out to $10 in real-world money, which means that if you wanted to permanently unlock all of the content currently available—three character routes with six paid books each—it would cost $180, plus any coin-locked choices in the prologue and whatever costs come from the remaining chapters.

That is a staggering sum, so outrageous that the game couldn’t possibly have been planned for the player who would want to make that choice. I am comfortable spending market price on a visual novel this good: the music is simple but fitting, the character designs are distinct, the background art has a lovely watercolor look, and the writing is engaging. But it’s disheartening to know it is all but impossible for me to see the entirety of the game’s content. While the Wheel of Fortune offers a chance to hit it big and win 1000 coins, it’s a vanishingly small proposition.

Nix Hydra by no means strikes me as a studio out to con its player base. All the online interactions I have observed via their public accounts paints a picture of an open, caring development team determined to make the best product possible within their team and budgetary restrictions. I wouldn’t ask them to compete with the likes of a major company like Voltage, whose status as the biggest name in English-language mobile otome games no doubt affords them the ability to offer lower prices across more games.

If the average character route in a Voltage game costs about $6, I would happily pay $10 for a route in The Arcana. In a roundabout way, I did. But I wish that were content I could keep and revisit. Trying out different dialogue options, following different paths, and unlocking CGs—the most basic pleasures of a visual novel—become outside propositions under the current payment structure. If the game turns out to have multiple endings, as several dev comments have intimated, that adds a whole new wrinkle to this pay-as-you-go model.

I am rooting hard for both Nix Hydra and The Arcana’s success (not least because I want them to have the funds for the second round of character stories; I love an Obvious Mistake route, and Count Trashfire is calling my name), and am already excited to see what work they do in future. But I also hope they’ll take a hard look at the pricing model, which is currently a steep cliff face for new and completionist players.  But with that precaution aside, I would highly recommend this title to fans of visual novels and inclusive gaming.

Tagged as: The Arcana, Videogames