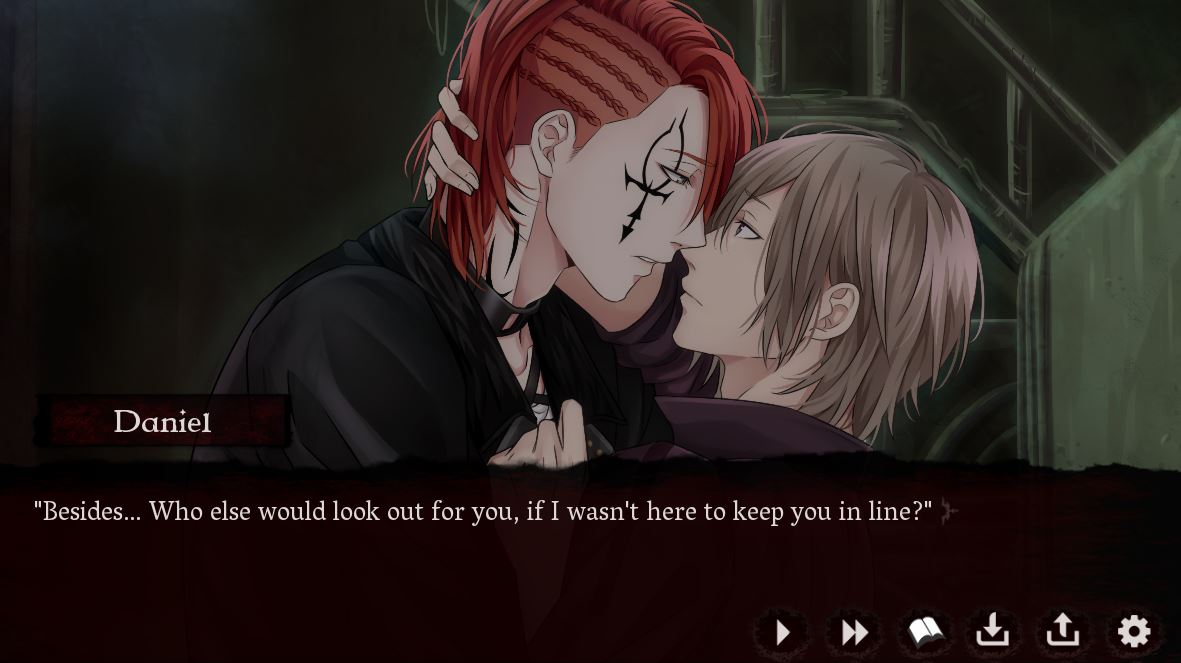 The vampire craze of the late 2000s has come and gone, the Twilights and True Bloods and Vampire Diaireses leaving a bad case of publisher burnout in their wake.  The only ones left behind are people like me, whose specific fondness for queer vampires wasn’t exactly served by a fad kicked off by a Mormon woman. With an itch hardly scratched by years of somehow aggressively heterosexual takes on a genre kicked off by Carmilla and OG Spooky Bisexual Dracula, I tend to be a bit of an easy mark—which is how I wound up buying Red Embrace, a five-dollar visual novel on Steam.

Embrace’s story is a fairly standard one for the genre. Main character Ash (whom I called Daniel in every playthrough, because there is only one truly important vampire groupie) works the graveyard shift at a rundown diner; one night, he happens to leave work and stumble onto a fight between two vampiric factions.

The three men Ash encounters that night serve as potential love interests and different lenses by which to explore the broader plot. A few other factors are thrown in for spice as well, such as the inexplicably tasty-smelling mortal” and an ominous coven leader, just to make sure it hits the major beats. 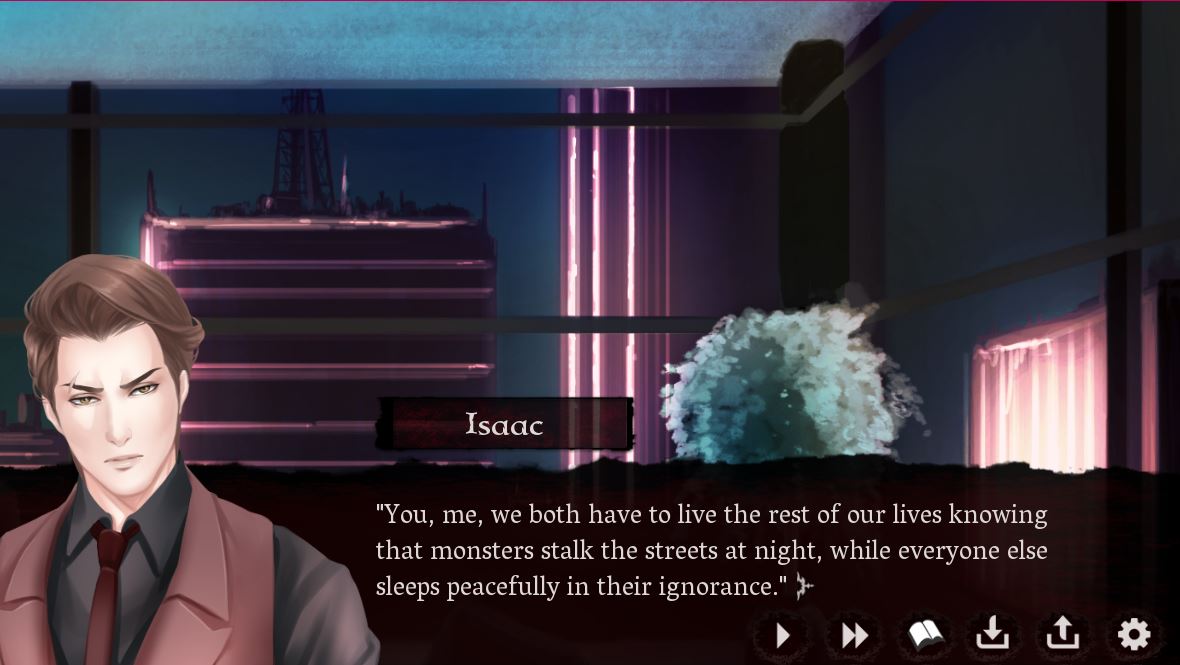 It’s nothing genre-shaking, but it’s not trying to be. In fact, it’s the sort of story that gains layers the more familiar one is with the genre. Each love interest has a tonally different route, and in addition to filling a general romantic archetype they each represent the ethos of a major vampire story.

Broody Dominic, who views his vampirism as a curse and resents his own kind, has a whiff of Angel and, to a lesser extent, Edward Cullen. Punk orphan Rex is leathered up in a Lost Boys look, searching for family in a street gang. And mortal information broker Isaac, rescued from sexual abuse by a patriarchal vampire who turned out to be even worse, is squarely in the Vampire Chronicles’ wheelhouse.

The short length means that there’s not much of a unifying plot beyond each love interest’s personal stakes, which results in a few things being either vaguely defined or not exactly resolved by story’s end. But it’s made up for with the solid character writing, with each route solidly defining its own tone and complete arc for the player to invest in.

The game was made by a two-person production team, and while it’s a short offering clocking in at about four hours (if you 100% the achievements), you won’t find any egregious cut corners. The character models only have one pose but cycle through a range of expressions, the skip dialogue function clips along at a good rate and stops for unseen text, and there’s a modest but effective original soundtrack. There is a sense that more things might’ve been planned at one point, including a side character who’s introduced and has unique art but quickly becomes a non-entity, but this is in no way an unfinished game.

I was somewhat surprised to find this labelled as a BL game, as both the developers that make up Argent Games appear to be Western English-speakers. I’ll even admit that the product description proclaiming the developers’ love for “yaoi,” a term that’s been outdated for a decade now–not because there aren’t still people who use it, but because it’s highly emblematic of an intensely othering and fetishistic mentality in the genre’s history. It was an insta-red flag for me.

Even now, I’m somewhat ambivalent about that fact. On the one hand the game takes care to avoid the nastiest excesses of the genre: any coerced interactions happen before the romance, and even the ones of the “I had to do this to protect you” variety have dialogue options afterward to tell the guy off and get an apology.

On the other hand, this is still one of those universes where women just don’t exist, and the fact that it draws from the style of BL as a genre sort of inevitably leaves one with the feeling that it’s a little bit incidental if actual queer audiences are interested in the final product. I have no idea whatsoever if that was the team’s thought process, and I wound up feeling positive about the game and its characters in the end, but the ghost of an exploitative genre label more or less demands to be dealt with.

Argent Games has two other finished games at the moment, one a fantasy story and the other a courtly intrigue setup. I admit that their successes here leave me curious to check out their other work and see how they evolve as writers going forward. For now, I can definitely recommend Red Embrace for its affordable price tag and modest but effective production values, so long as you’re already solidly a fan of vampire stories.