As Above, So Below and the Purpose of Found Footage 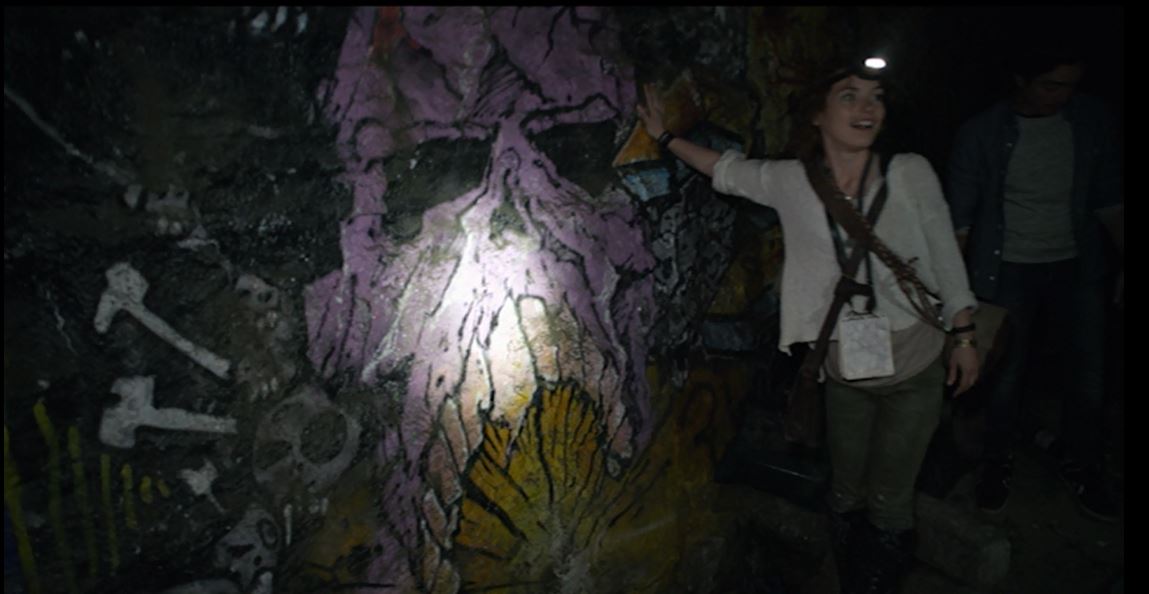 This essay was commissioned by abby-something. Want me to write about something you find interesting? You can find out more about commissions here.

A guy walks into a studio. “I have a great idea,” he says. “The Parisian catacombs are spooky, right? How come nobody’s ever shot a horror movie down there?” The film that resulted was 2014’s As Above, So Below.

I can see you itching your palms already. Unfortunately, you failed to take into account this monkey’s paw behind my back and its two stipulations: the director is John Erick Dowdle, whose previous film was the illustrious M Night Shyamalan brainchild Devil, and the specific horror subgenre is everyone’s favorite gimmick genre, “found footage.”

Now, the way a story is framed can make or break its success almost as surely as the content itself. This is true in general, with issues like narrator, sympathetic lenses, who is allowed to speak and how their words are backed up or refuted by the narrative around them, and so on. In film, it also means technical considerations like whether or not to have a narrator, to tell a story chronologically, or to conceal certain information until a crucial point. It’s storytelling 101: based on a hundred other factors, two artists could take the same set of basic facts and produce wildly different final products.

But when you get into genres where the types of stories being told are dictated somewhat strictly by the way they can be told, the options are drastically cut down. While romance tends to get bagged on for having specific conventions, the broad strokes of “two people meet, possibly have sex, miscommunicate and wind up together” can be slotted into a truly breathtaking number of scenarios with room to explore a lot of other ideas in the meanwhile. 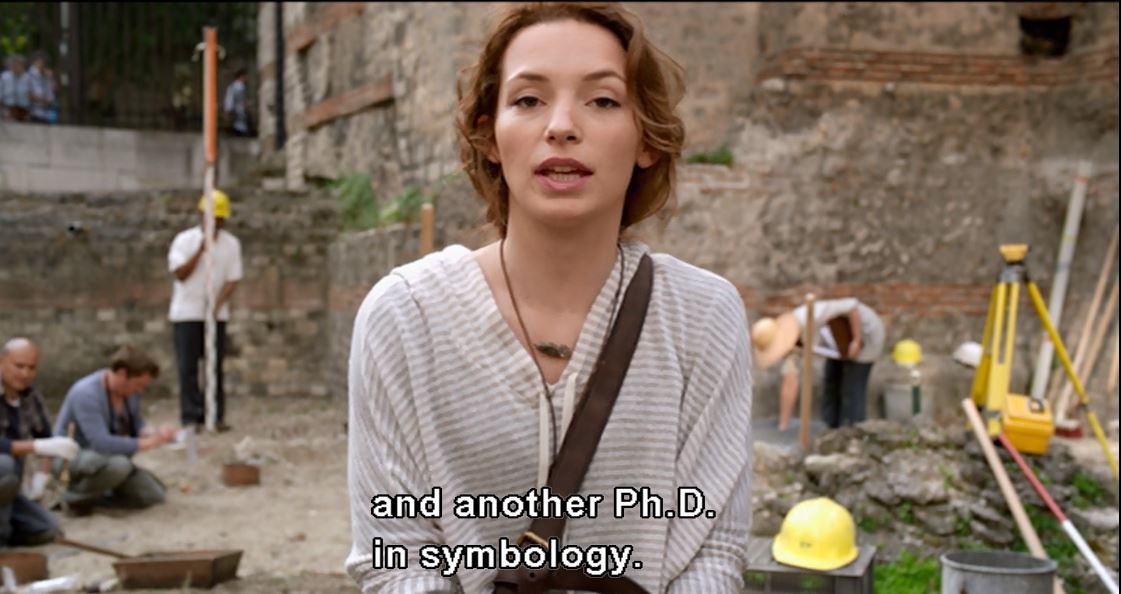 The arguable defining ancestor of found footage, Cannibal Holocaust, was framed around an examination of footage recovered from the Amazon in order to make a hamfisted point about the voyeurism of the camera and cruelty captured for ratings (while also killing lots of real animals and simulating a lot of graphic torture and rape). The Blair Witch Project achieved a considerable amount of fame due to viral marketing that attempted to suggest this was the actual “found footage” of young filmmakers who’d gone missing, justifying the long stretches of nothing and the inelegant feel of the cuts and camera work.

Both of those films, whatever else is true of them, are exploring ideas to which the use of found footage is integral. Without that narrative conceit, they would lose something vital about their stories. Even the original Paranormal Activity, the latter-day darling of a dated sub-genre, owed a certain tension in its creation to the static paralysis of watching a recording. But mostly, found footage movies exist because found footage movies are popular, whether or not it shoots the film’s other graces in the foot.

As Above, So Below suffers from one hell of a foot wound. 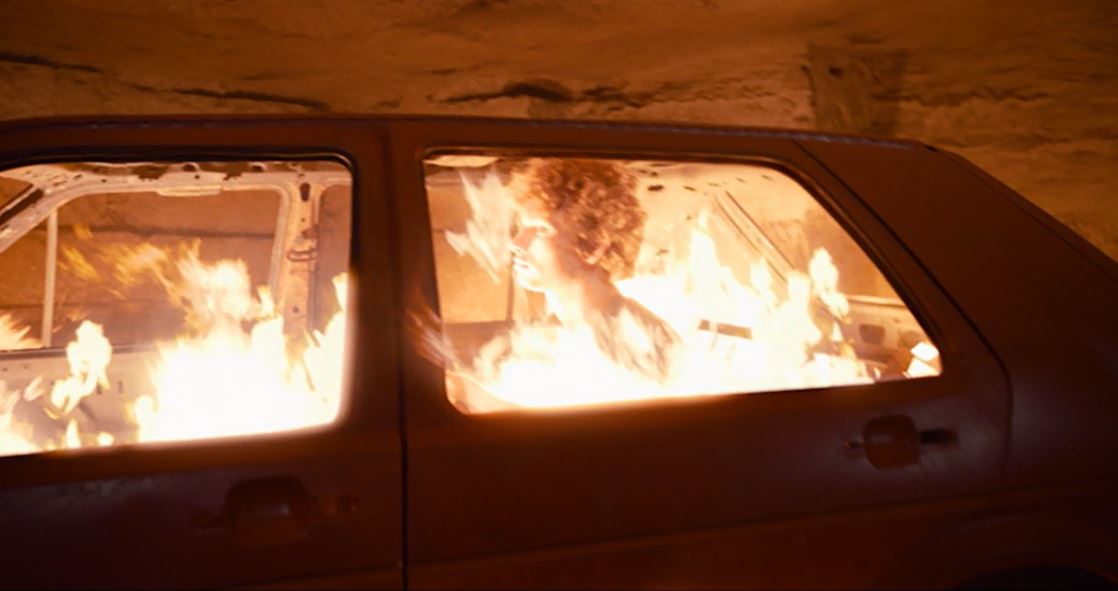 The trek into the catacombs (after an intensely cringeworthy opening sequence set in Iran) is spearheaded by Scarlett, a scholar who’s obsessed with completing her father’s search for the Philosopher’s Stone. Through some almost Da Vinci Code-level moon logic, she determines that the stone is located several hundred feet beneath Paris and assembles a team to help her go after it. Once they actually get to the catacombs the film becomes an Event Horizon riff and it’s a race to get out of Hell alive.

Removing the found footage issue for a moment, there is the core of an interesting idea in AASB—the same one that was interesting but squandered in Event Horizon, and has provided the backbone for the most successful Silent Hill games, their predecessor, Jacob’s Ladder, or even Spec Ops: The Line: it is scary to send humans into isolated places where they are alone or surrounded by debatably trustworthy people and then confront them with warped images of their guilt and regret.  Add mythological underpinnings of your choice for spice. 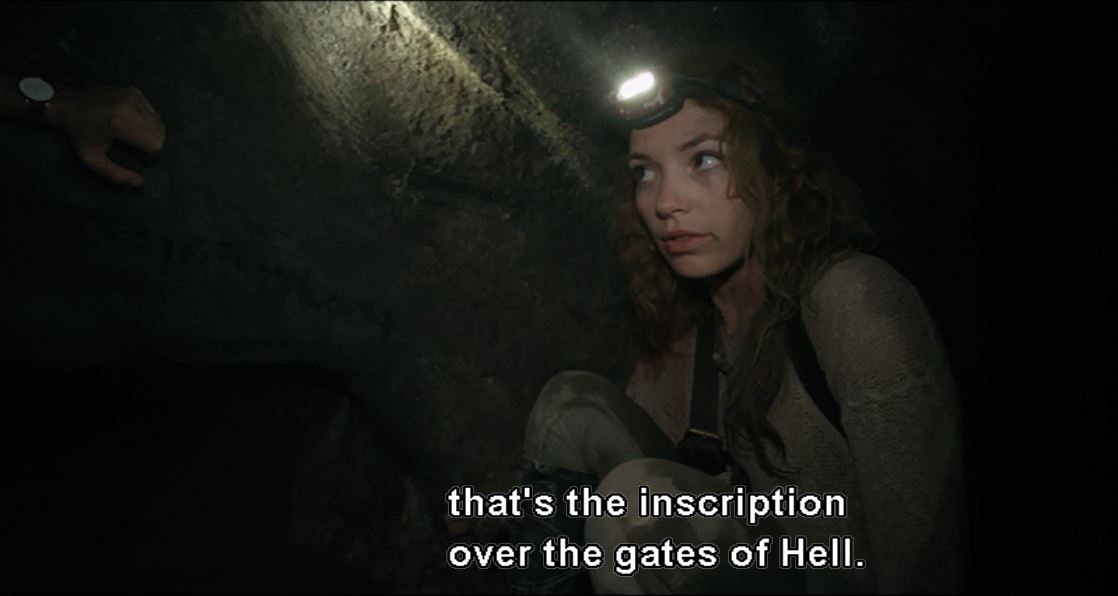 It’s easy to hit on but hard to actually achieve, requiring time for the audience to invest in the characters whose inner demons are about to be exposed and an atmosphere and visual design vivid enough to make those nightmares pop. The budget need not be extravagant, but there has to be a sense that we’re entering another world of the character’s own perception.

AASB has nearly solid leads in Scarlett and the claustrophobic translator George. It has sufficiently sketchy guides in the French Papillon and his gang (there is a whole separate nexus of problems to do with this being a film by and about Americans poking around in so storied and loaded a location as the catacombs). But rather than quickly isolating them in order to do a slow psychological meditation, it takes on a slasher-style structure of slowly picking off members of the team until three are left (including, bafflingly, a barely-developed tertiary character whose Tragic Sin is hilariously crammed in at the last second). Eventually it abandons the “show them their sins” mechanic altogether and just starts chucking monsters into the mix in order to move things along faster. 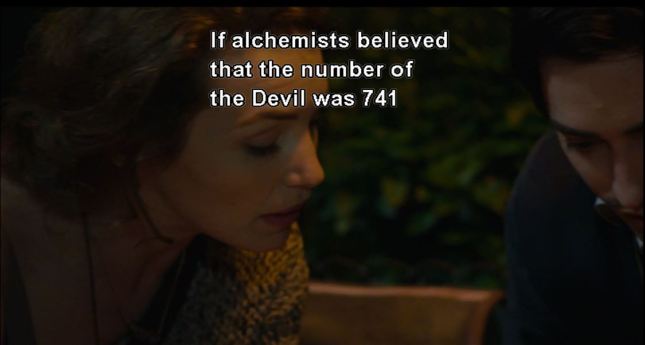 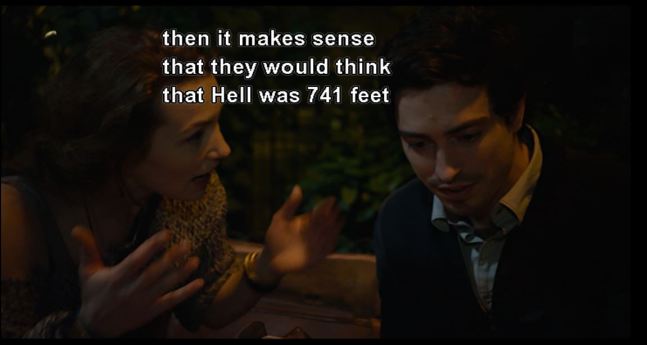 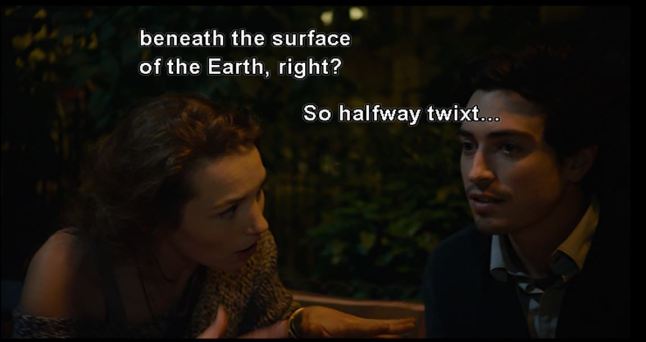 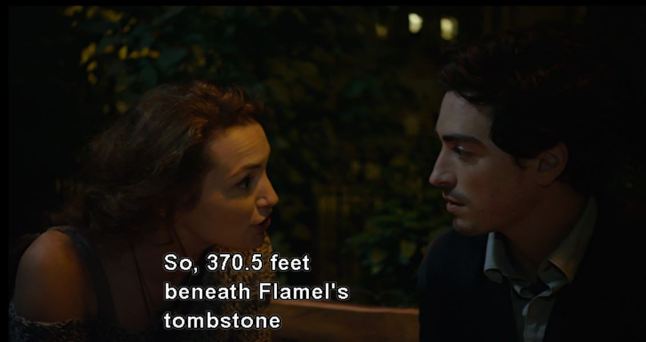 The basic beats of what the story wanted to do are evident, but the execution is sorely lacking. The setting, easily the film’s most unique feature, is wasted. There are a multitude of ways one could explore how horror is normalized once it becomes a commonplace setting, or its commodification, or the clash of reverence and prurient fascination around death, or literally any story that was germane to the setting rather than incidental tourism. But then, I am once again expecting more than a film from an American perspective on a very French landmark could possibly offer.

The practicalities of the camera work do it no favors either. While there were doubtlessly difficulties with filming in those spaces, the lighting and staging give little sense of the gravity of the setting—the characters might as well have been crawling over plaster bones on a soundstage. The obvious point of comparison is The Descent (which the director has definitely seen, given that they dunk Scarlett in a pool of blood at one point), a film about being trapped in small, dark spaces that was an expert not just in imparting claustrophobia but in making creative use of color washes to differentiate characters and allow the audience to differentiate a lot of similar looking spaces.

Unfortunately, you can’t carefully frame your shots and employ non-diegetic lighting when you’ve noosed yourself to a found footage conceit. Nope, that means bright cave lighting and nausea-inducing shaky cam from toe to tip, as well as a few blatant moments of cheating the conceit to create some irritating flashing-light sequences. The result is watching the characters walk into an empty, brightly lit space with a piano sitting in it and knowing that we are meant to be terribly unnerved by this in theory. In practice, it looks like an unused practice space that needs a good sweep. 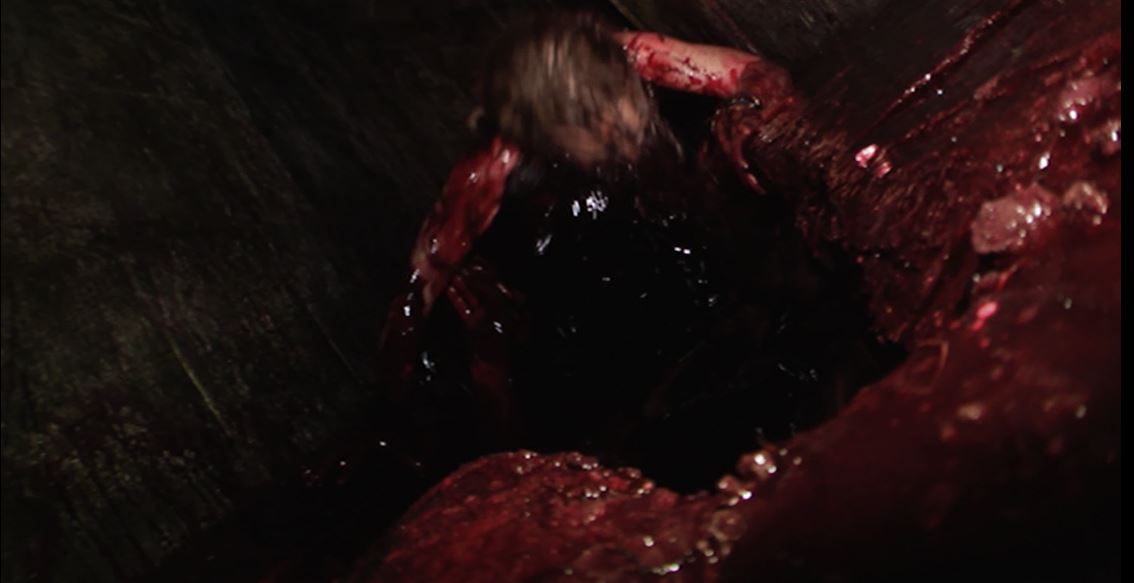 Finally, there’s the fact that found footage is antithetical to the kind of story they want to tell. As they originated, cameras provided us a lens of supposedly objective truth into situations where the characters had lost their moorings and begun behaving horribly, giving us clarity that they had lost. Silent Hill and its ilk are stories about the uncertainty of what the characters are seeing, and how that makes us both more suspicious of everything presented to us while also allowing us to more completely understand one point of view.

Putting them together requires us either to believe that what the characters are seeing is somehow objectively true and shared, making it a fantasy-style story rather than anything to do with personal demons and perceptions, or it begs the question of how the footage was corrupted. While the film does display a few flourishes of thought in regards to pulling off its puzzle sequences (the survivors deliberate how to solve a planet-based riddle based on whether it was written before or after a heliocentric model of the universe), that thought doesn’t seem to have extended to the form and structure of the film itself.

The result is a story that can’t escape its gimmick, and whose potential is impossible to contemplate without a complete reevaluation of framing, equipment necessities, and crew skills. Faced with the opportunity to film on top of one of the great horror stories of history, they returned to a conceit that has itself wandered far from its supposed roots of exploring why we record violence. Unable to grasp that disjunction, all that’s left here is artifice.

Tagged as: As Above So Below, Commission, Movies