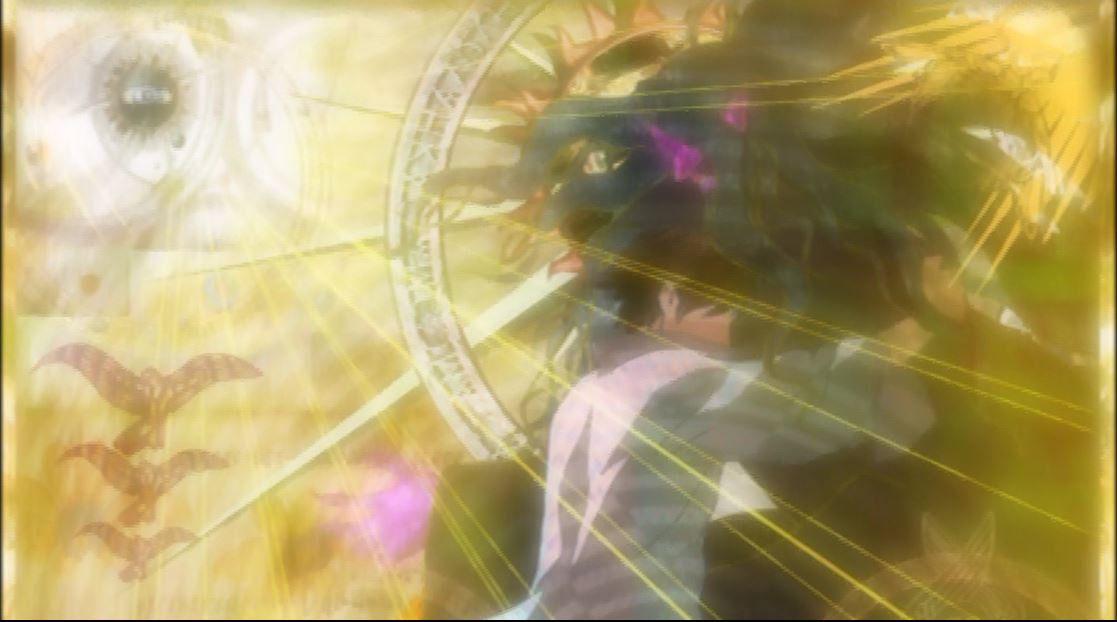 After the Rain has sparked many a conversation about the lines between ethical fantasy, how age gap media is targeted (and how you can tell), and the romanticizing or normalizing of potentially predatory behavior. Many have argued that AtR is a light and harmless fantasy show meant to give young women a chance to live out their crushes on older men in a safe environment. I’ve talked before about why I don’t truck with that assessment—the framing skews heavily toward romance (Crunchyroll’s ad copy quotes it as a “heartrending love story”), heroine Akira wouldn’t be out of place in the films of real-life predator Woody Allen, and most of the interior life is given to the male protagonist Kondo.

Whether or not Akira and Kondo wind up together forever (or at all), there’s the fact that framing matters immensely. No media exists in a vacuum—it inevitably answers to other works of art and to real events, and doubly so when it sets itself in a real, grounded setting like Rain’s. It means that whether or not the show intends, say, to play up that Kondo is so completely harmless and could never hurt a girl against her will (a technique commonly used by predators) or frame the narrative so that Akira is constantly coming on to the clueless Kondo (an excuse favored by sexual predators after they’ve been caught), it nonetheless creates a seedy impression hitting too close to real life—and not in a way the show is intending to. There is a reason that the most successful shows about indulging in a taboo subject have some marked fantastical element to set them apart. “This is a fantasy for teens,” I often hear, but it strikes me as the opposite—a fantasy for old men who want to prey on teens. I know, because my all-time favorite anime—one I discovered as a teenager and have continued to enjoy into adulthood—has at its core the story of a teen who is able to save an adult from himself.

Gankutsuou is an adaptation of The Count of Monte Cristo: the classic tale of the wrongfully accused Edmond Dantes, who reinvents himself and returns to get revenge on those who ruined his life. However, while the book is from the perspective of the titular Count (as are most adaptations), the anime follows the son of one of Edmond’s persecutors, a naïve boy who’s key to the Count’s plan to work his way into the heart of Parisian high society. Young Albert falls instantly for the Count’s charms, and much of the anime involves the Count playing on that crush to get what he wants. 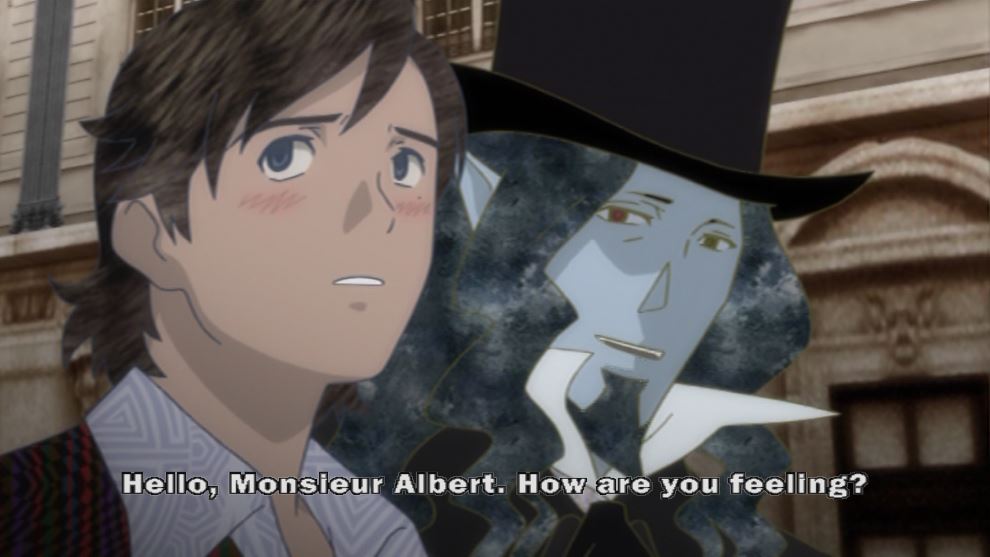 The show can be said to divide into two equally strong experiences: watching as a teenager and living vicariously through Albert, and watching as an adult with the full, additional context that the anime takes care to provide.

For a young viewer, Albert’s story is very much a fantasy. He’s at loose ends when the story starts, a sheltered and privileged child looking to experience an idealized version of what he thinks love is. When the Count arrives, he’s the embodiment of the appeal of an “adult” romance: he’s suave, confident, worldly, but mysteriously interested in Albert in a way that makes him feel special and unique. There is something that sets Albert apart and makes him worth being noticed, just like he wanted. 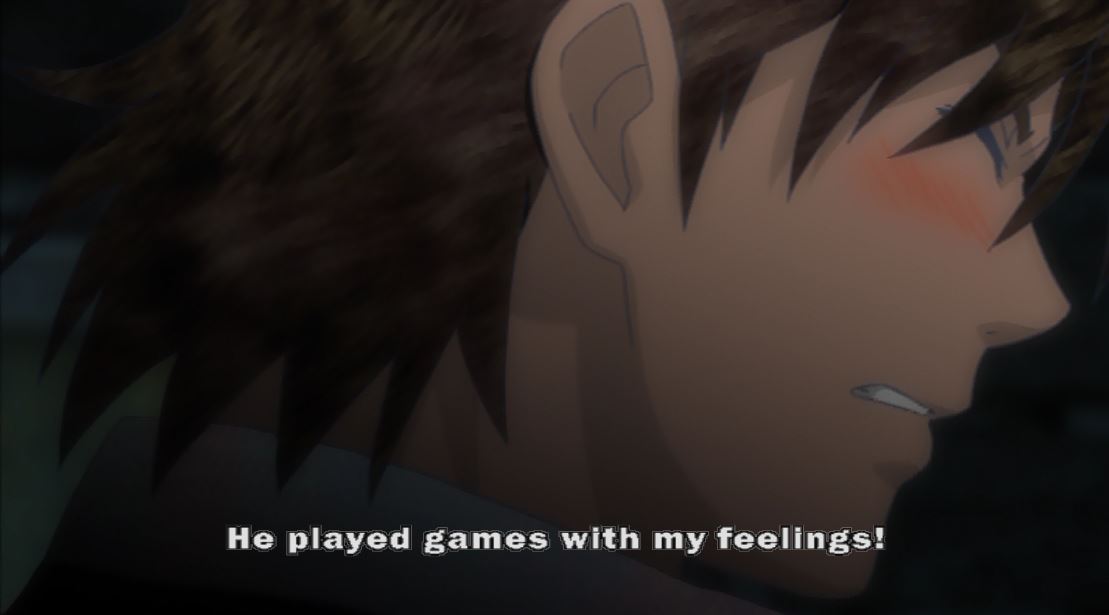 Even when the Count reveals his scheme, breaking Albert’s heart and forcing him to grow up, the story still plays out as an emotional fantasy for a young viewer. Albert has been hurt, but because of his investigations and his time as a pawn, he’s the only one who’s seen the “real” count under the elaborate schemes and the need for vengeance possessing him. In the end, it’s Albert who saves the Count with a kiss, an expression of love that drives the literal demon of vengeance from the Count’s body and makes him human again.

Albert begins as a pawn only to break through the deception and become the only one who understands. It absolutely fits into the mold many younger viewers might imagine for themselves, someone who feels at odds with their life going through an incredible experience and earning the acknowledgement of someone they respect, and being needed in a way that nobody else is—all of it couched in a fantastical sci-fi setting and melodrama that makes it feel safely far away from imitable actions in day-to-day life. A lot of young viewers might identify with Albert, but not a lot of them are young aristocrats caught in the machinations of a generations-long revenge scheme. It would be fine enough for a certain audience, destined to age poorly as they grow out of those feelings. But crucially, that’s not all Gankutsuou is. As a story about growing from a child to an adult, it also places importance on layering in information and context outside of Albert’s experience: things that when, looked back on from adulthood, both preserve the sincerity of Albert’s feelings but also strip the proceedings of their romanticism. And that’s part of what makes it such a dynamic work of art, no matter the viewer’s age.

The story doesn’t just stay in Albert’s perspective—we often see the Count alone, plotting how he tends to manufacture his interactions with others in order to heighten their suffering. He is always a sinister figure, and we are forced to always consider his interactions with Albert in this light: no matter how kind or open he seems, or even if there is a grain of truth to what he says, he is manipulating a child for his own ends, with little to no regard for that child’s feelings—except for how they benefit him. We are never allowed to forget that this is a predatory relationship, and that no matter how much special insight Albert thinks he’s getting, it’s a calculated trick. 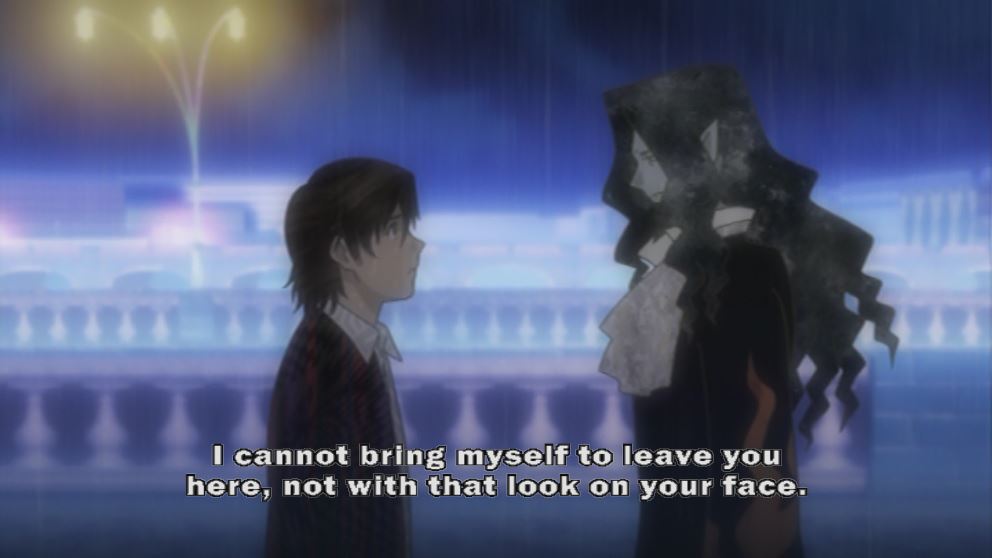 One of Gankutsuou’s smartest choices was to keep this relationship a purely emotional one. Outside of a few momentous hand-holdings, nothing physical happens between Albert and the Count. And the one time it threatens to is an absolutely crucial point in the story as an adult viewer. I mentioned above that there’s a point at which the story switches from Albert as a pawn to Albert as redeemer, hinging on eventually coming to view the Count as a tragic figure. The turning point in that arc is the only moment at which a physical relationship seems possible.

The Count isolates Albert, taking him onto a ship in deep space right as his father is mounting a political bid that would be wrecked by any emerging scandal (and what more scandalous than your young son being seduced by an older man of mysterious origin?). This is all rendered in subtext, but it’s pretty damn blatant: they are alone, in an intimate setting, wearing robes and smoking a pipe. It’s the kind of situation rife for pressuring someone young and enamored to do things they wouldn’t be comfortable doing in a more stable environment. 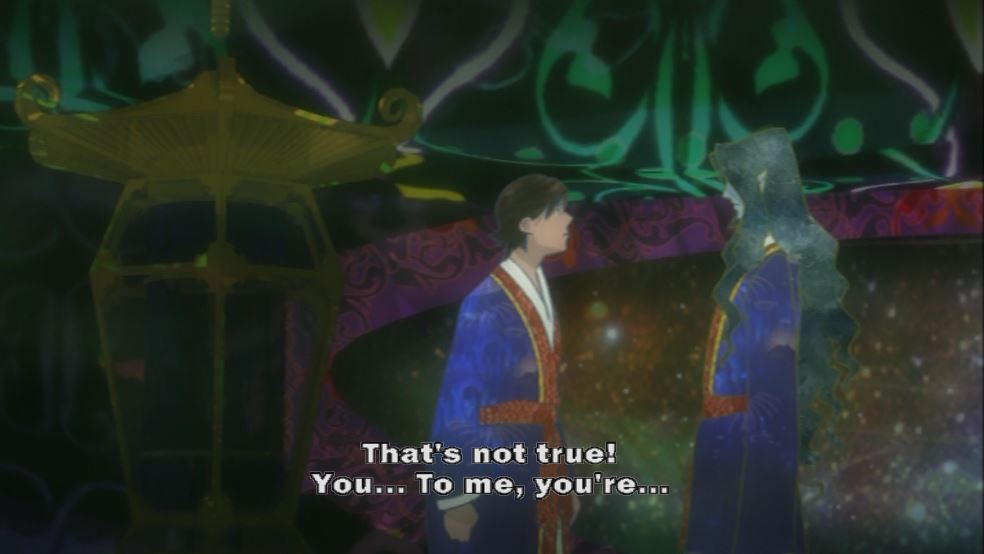 But the Count can’t go through with it. Seeing Albert trying to make an earnest confession of love, perhaps gripped by a last gasp of humanity that realizes how monstrous his actions are, the Count cuts the “vacation” short and sends Albert back to earth. It’s one of the Count’s last moments of clarity as he becomes increasingly subsumed by his spirit of vengeance. This most crucial moment of humanity is tied to the realization that if he truly cares about Albert, it would be monstrous and wrong to take advantage of him. It’s a powerful scene, and crucial to convincing the audience that the Count is worth mourning as a tragic figure.

When the series reaches its climactic moments, Albert is indeed the one to break through to the Count with a “true love’s kiss” of sorts…but in doing so, he makes the Count vulnerable to the wounds he’d suffered as an untouchable revenant and seals his fate. While the climax of the story hinges on honoring the sincerity of Albert’s feelings, there’s also a built-in self-destruct clause. No finagling is going to argue that something out of this situation would make for a good couple. 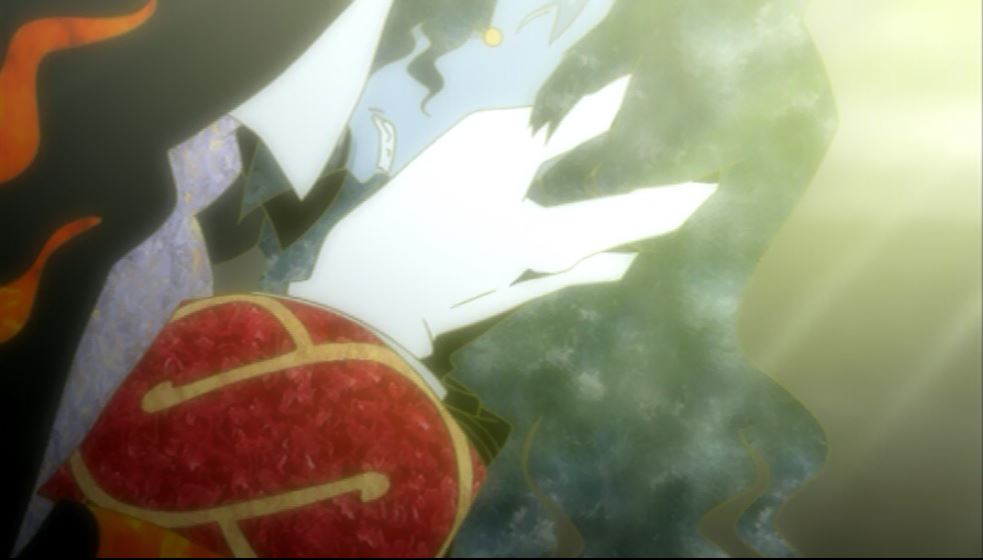 While a tragic story, it’s also an unsustainable one, with too much monstrousness built into the very foundation of the relationship to ever survive sincere feelings. Albert is a child. The Count is the monster who preyed on him. The tragedy is that he realized his actions were wrong only after he had come too far and done so much damage, not that they can never be together. It’s a razor-thin line to walk, and it’s a credit to the show’s emotional complexity that the story is satisfying on multiple levels to a variety of audiences.

So, how do you responsibly write a teenager falling for an adult? Not a 16-year-old and an 18-year-old straddling the gap but comparable in maturity and experience, but a real and visible gap? You make it fantastical, in a setting that’s clearly separated from things that could be replicated in real life. You don’t shy away from the monstrous elements or excuse the adult’s culpability in what’s happening. You respect your young character and young audience, while acknowledging the damage this could cause for them as they grow older (ideally, you make it temporary). And you never, ever, make the series to appeal to the fantasies of adults who want to fuck kids. And if you don’t think you can handle every part of that tall order, maybe don’t do it at all. 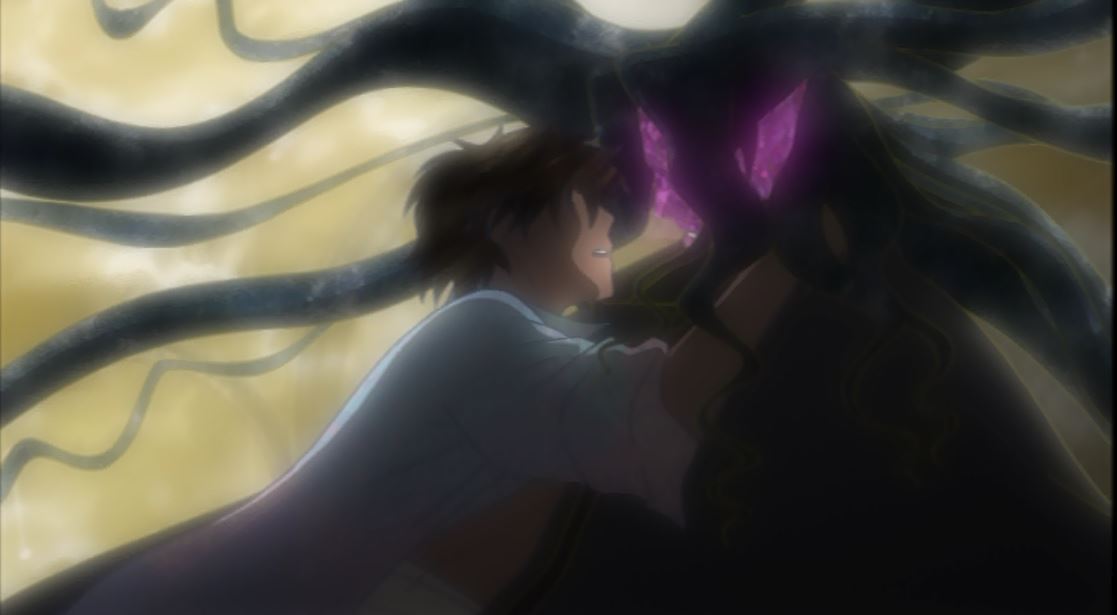 Tagged as: After the Rain, Anime, Gankutsuou