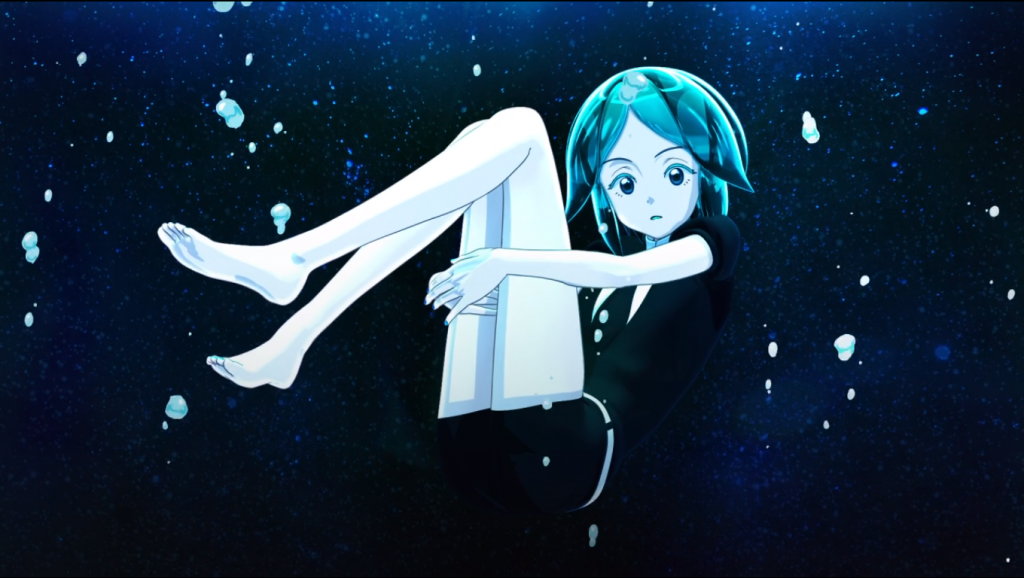 I am incredibly proud of this piece–perhaps one of the best I’ve ever written. If it leads to new awareness in the industry, I’ll be happy.

Land of the Lustrous has proven to be a sleeper hit of the Fall 2017 season, with its beautiful melding of CG and traditional art, creative direction, likable characters, and penchant for cliffhangers. It also made minor waves by deciding to refer to almost the entire cast with neutral “they/them” pronouns. In an industry that has historically elected to choose binary pronouns for characters who aren’t gendered or are gendered ambiguously in the original text, this marks a small but important—and most crucially, conscious—shift. The decision-making process for Lustrous began with the translation of the manga in early 2017. Lauren Scanlan, an editor at Kodansha Comics, spoke with me about the multi-step process that led them to use neutral pronouns for the characters:

For this series, the translators and I talked quite a bit about how to approach pronouns in this series. Because it’s a fantasy story that does not obviously take place in Japan, we decided to omit all suffixes (-kun, -chan, -oniisama) and instead adapt them into the names themselves (aside from Sensei, which is widely understood in the English language). There’s a good note about this in volume 3 or 4 in regards to Alexandrite’s name, for example. And though the Japanese uses some pronouns (boku, kare, etc.), these are more to connote power dynamic relationships between the gems than assign them any sort of gender role.

We did consult with the author and the Japanese editorial team about the series, and ultimately, the decision to use gem’s names (or the use of “gem” as a pronoun!) was from our side, to keep clarity in the English language version of this wonderful story with a large cast of characters who may or may not be on-screen for the dialogue.

Scanlan’s commentary includes a crucial fact about translation that fans often forget: context is key. A fan who can pick out the odd use of kare (a masculine third-person pronoun) in dialogue, thus declaring that clearly these characters must be male, lacks the grasp of a translator who’s devoted themselves to understanding not just the words of a language but the nuances of speech, implication, and situational meaning. This is not to say that professional translators are flawless, untouchable beings—far from it, as we’ll discuss later—but that there’s complex reasoning behind why certain translations are chosen.

Kodansha’s localization team, as Scanlan mentioned, also spoke with Lustrous’ manga author Haruko Ichikawa as part of their process. This is one of the wonderful things about globalization, and a far cry from the stabs in the dark that characterized the efforts of the 1990s.

That information-sharing wasn’t a one-way street, either. Ichikawa clearly thought about her discussion with the Kodansha staff, and that discussion paid dividends when the time came for the anime adaptation to add subtitles.

Tagged as: Anime, Anime Feminist, Land of the Lustrous