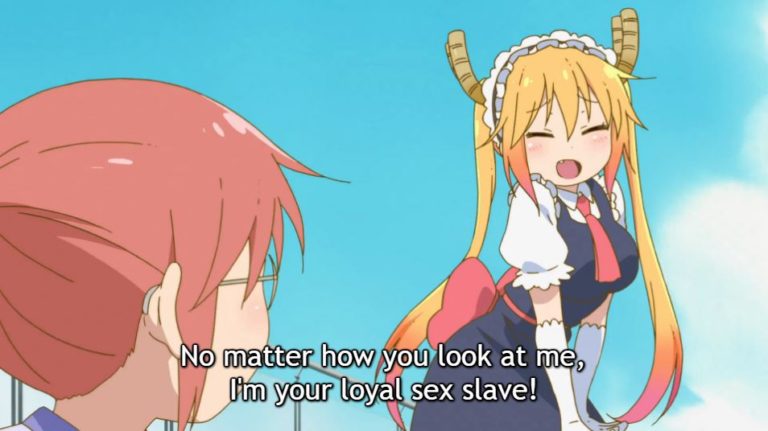 Here at AniFem we talk a lot about fanservice—no surprise, given how predominant and normalized the sexualization of (mostly female) characters is in the industry. But it’s far from a cut-and-dried issue: a boobs ‘n’ butts show about adults isn’t the same as panty shots of a 13-year-old which, in turn, isn’t the same as fetishizing helplessness. And all of that can make it difficult to suss out grey zones like bawdy comedy or actual sex-positive content grounded in character agency. It’s easy to make a checklist and call it a day, and while everyone has their own line in the sand, those grey zones are worth exploring.

To break a bit from the usual “Fan vs. Service” model, I wanted to explore three different kinds of sex-focused narrative models—exploitative fanservice, bawdy comedy, and honest explorations of sexuality—all found in a single show: Miss Kobayashi’s Dragon Maid. The series had a way of throwing things at the wall to see what stuck, and the result was uneven but joyous when it succeeded. It’s worth taking a closer look at what worked, what didn’t, and why that was.

(Also, for the sake of uniformity and time, I’ll only be focusing on Kobayashi and Tohru’s interactions. The trainwreck that is Lucoa’s subplot, as well as the often borderline uncomfortable framing of Kanna, could easily fill their own essays.)