Gravity Falls Rewatch: Dipper and Mabel vs. the Future 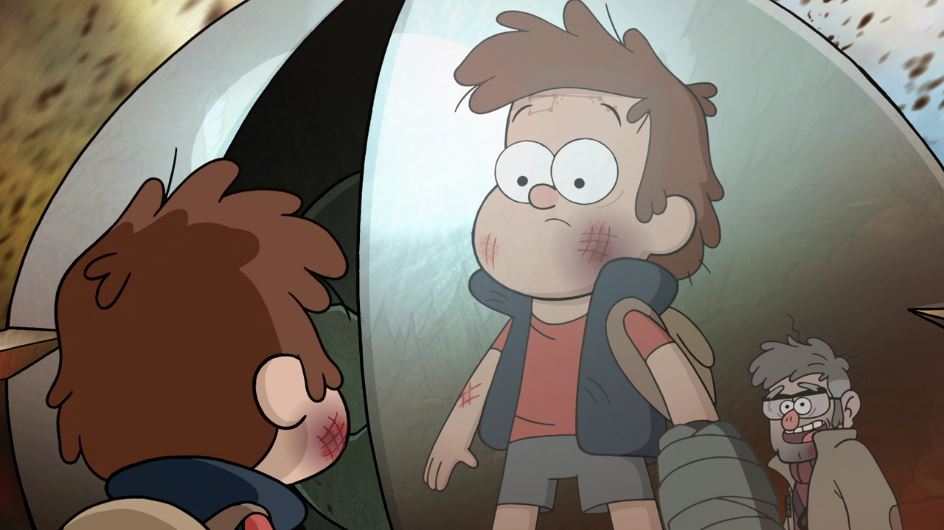 If Ford projected any harder, he could be used to screen films.

Mabel makes plans for the twins’ 13th birthday party while Dipper goes with Ford to try and repair a crack in the Dimensional Rift’s containment unit. While Dipper explores a UFO, saves Ford’s life, and takes an offer to stay on in Gravity Falls, Mabel hears horror stories about high school, finds out her friends are leaving her behind and that her brother apparently will be too. Scared that growing up will be miserable, Mabel is tricked into giving Bill the Rift and unleashing Weirdmageddon.

This is essentially the last proper “episode” before the pseudo-film finale, and that leaves it with a lot on its shoulders – not least because “Roadside Attraction” probably should’ve come earlier into season two (sure, Stan’s motivated by insecurity, but Ford’s not really mentioned at all – it could’ve been in the first half), allowing the cliffhanger from “Last Mabelcorn” to more smoothly carry its tension forward into this one; instead it has to kickstart things again from an episodic precursor, then dial all the way up to 60 in both character and plot stakes. The episode does its best to tackle those needs with a moody, oppressive feel, and director Stephen Sandoval uses a lot of that same bloodred lighting that worked so beautifully in “Not What He Seems.”

It packs emotional beats densely and winds up with its focus on Mabel, since Ford and Dipper have had more time to reach this point in past episodes. And while this could’ve easily felt rushed (the show was batted for three seasons, with Ford revealed at the end of season 2, but that was quite early on and changed during 2’s writing process), it succeeds in being dense without also being cheap. If anyone suffers it’s arguably Ford, who could’ve benefited from a bit more screentime, but both the twins get to have great arcs this go round.

The result is, in terms of raw action, a kind of reverse “Sock Opera.” Dipper is throwing his heart and soul into a project (scientific rather than creative) in the hope of impressing someone, temporarily wearing blinders as to how this might hurt his sibling; meanwhile, Mabel is undergoing an incredible amount of emotional pressure in a compressed amount of time, which leads her to make an impulsive decision that she immediately regrets. And while many a person was convinced Dipper was on his way to the Dark Side after dealing with Bill, Mabel’s mistake led to something of a fandom-backlash witchhunt. It was….very bizarre and disheartening to watch. These were the peak days of needing the THEY’RE TWEEEEEEEEEELVE bullhorn. While Dipper sometimes gets himself in deeper trouble, he’s also the show’s most direct protagonist, and thus far more likely to be involved in big plot mistakes rather than smaller interpersonal ones (that, and since Dipper is somewhat a stand-in for Hirsch, I imagine he feels more comfortable being harsher on his past self over his sister).

This is Mabel’s darkest moment, the dark side of her balancing out Dipper’s desire to grow up too fast – the unknown was something she was content not to think about, but when a bunch of bad things happen in succession it scares her. Because while they’re growing up, they’re both still kids. Dipper hasn’t thought about how choosing to be Ford’s apprentice might have downsides, and Mabel convinces herself that there won’t be upsides alongside all the hardships of getting older. It’s a normal part of being a kid; except most kids don’t have conniving chaos gods lying in wait for the first sign of weakness. And when Mabel does realize what’s happened in her big plot screw-up? ….Well, we’ll come to that. 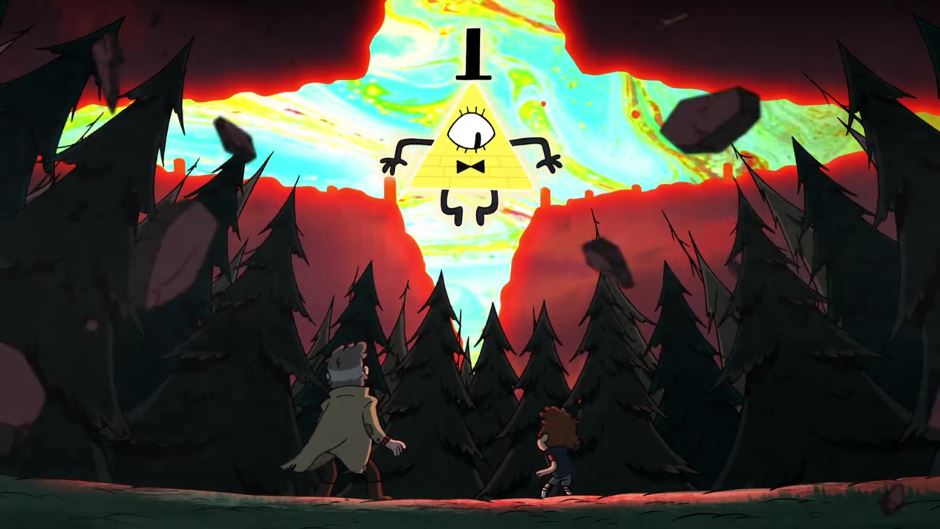 I haven’t been mentioning it consistently, but Hirsch got a lot of mileage out of the McGucket puppet from “Sock Opera.” Over time, it seemed that every time the show was in need of some kind of promotional material, out would come the puppet for a short thematically-adjacent goof. This had the added bonus of hiding as much of the new episodes as possible from the fandom, which (as you recall) would descend on any new hint of material and have it picked to the bone within an hour.

As the finale came closer, there was also an influx of engagement. You had the “Pocalypse Preppin” shorts (helpfully catalogued by the same kind soul who ran that mysteriously banned Tumblr and currently carries on the fandom merch mantle on Twitter), which were handy little bits of foreshadowing; and the gently teasing “Conspiracy Corner” shorts that actually aired sometime later if we’re being strictly chronological. Those were likely meant for a slightly younger or less fandom-involved viewers, nudging them to look for certain patterns (TRIANGLES) and codes hidden in the background. It’s kind of a sweet gesture – no doubt anyone who tried to pick up the show at this stage in game would’ve been DEEPLY overwhelmed by the fanbase.

Oh, and don’t worry. They were making sure to get plenty of use out of the Stan puppet too. 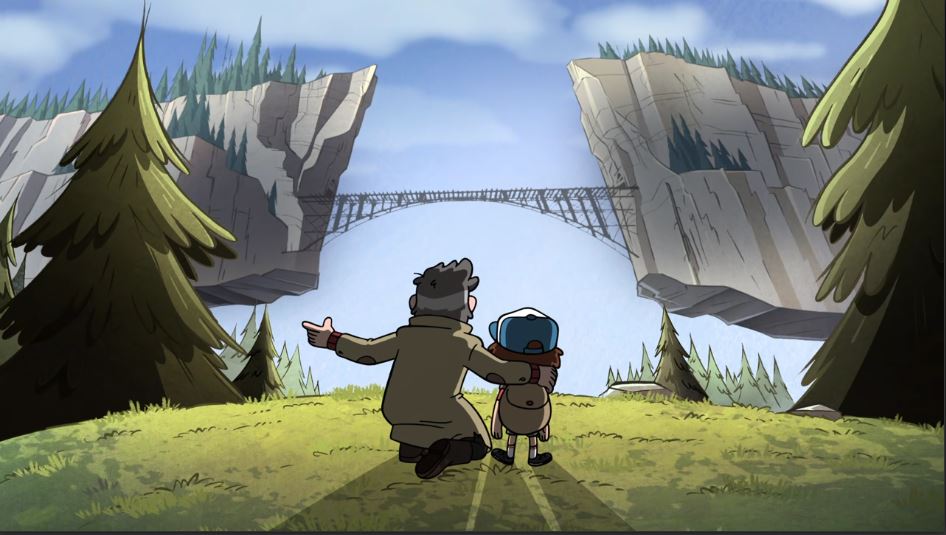 CREDITS CIPHER: Did You Miss Me? (KEYWORD: Bluebook)

PAGE CIPHER: The Prophecy Seemed Far Away, But Finally We’ve Reached The Day. Give Up The Past, Embrace The Strange, Everything You Care About Will Change

There are also several messages written in symbol coding inside the UFO, most of which are in-jokes to other sci-fi series (“Probability Drive Engine,” “Betty and Barney Were Here”), and one of which is a delightful Scientology joke (“Used Thatens Half Price”). There’s also a reference to the Shapeshifter coming from the ship (“Specimen Has Escaped Is Changing Forms”), which was later confirmed in Journal 3.

Oh, and speaking of Journal 3, this is also the outing where Dipper tells Ford his birth name (which, during the show run Hirsch had hinted at by saying it had something in common with Mabel’s name). Are you ready?

It’s Mason. Which is both a groaner of a pun and also really, really cute. 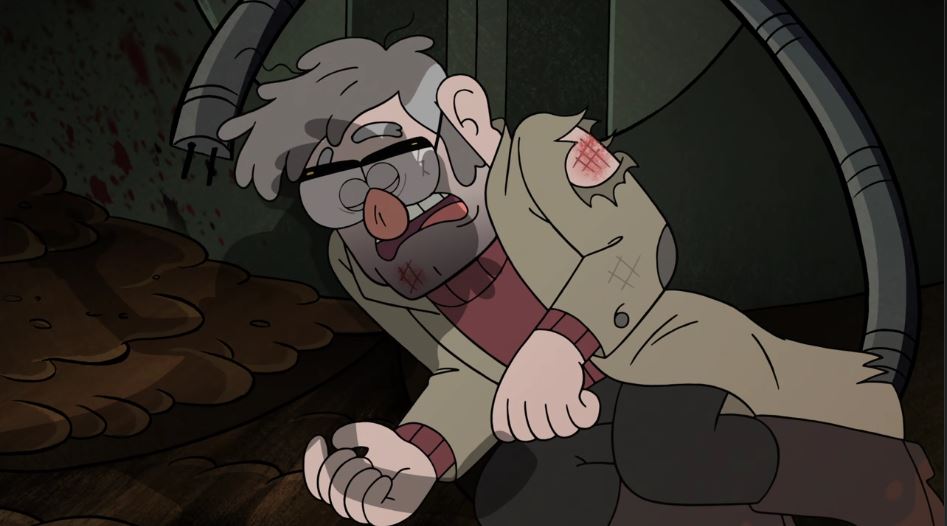 It’s hard to spoil things when you’re literally walking into the finale, so I might as well carry on using this space for musing on FORD, WHY ARE YOU LIKE THIS. This episode is the point at which Ford’s behavior tips over the edge from “not the greatest caretaker, but not really MUCH worse than Stan in season 1” to actions that could have had lifelong negative effects on the twins if the apocalypse hadn’t broken out and led to Ford getting his shit together.

Ford talks overtly in-show and in Journal 3 about seeing himself in Dipper, which is already leading to a severe case of projection; Ford retroactively convinced himself that he doesn’t MISS his brother, he was SUFFOCATED by him, because in some ways Ford is still buying the line Bill gave him about him being special. In his own mind, Ford is the hero of a very specific kind of narrative, the kind where a Lone Hero is a Misunderstood Genius and the whole world is against him, but he triumphed through nothing but his own willpower.

Now he’s not only buying the hype that was probably initially a way to stop feeling guilty about all the wasted years apart from his brother, he’s applying that same mentality to Dipper’s life. This is A) poisonous to one of the most solid support structures in Dipper’s life and would probably also have the effect of cutting Dipper off from Stan and his parents, and the fact that Ford probably means well negates exactly none of this; and B) does not speak well of Ford’s opinion of Mabel, since he was able to praise her for protecting the Shack and then just as easily tell Dipper he doesn’t need her. That’s fucked UP, Ford. This is an adult hanging out with a kid who trusts him implicitly and is ready to internalize and follow his every word. Ford clearly loves the hero worship, but is also already treating Dipper like a friend (an implicit equal who would theoretically be responsible for himself and his own wellbeing – a replacement for Fiddleford). This cocktail of elements would lead nowhere good.

Also, Dipper’s baby steps toward being a person who’ll be able to handle interpersonal relationships maturely would be tanked immediately while living with Ford.

Ford thinks he’s the brilliant inventor in an adventure series, here to take on the world and show his young ward how to follow in his footsteps. What he’s on the verge of becoming is Jonas Venture Sr. But more on Ford being two strong strides from villainy next time.