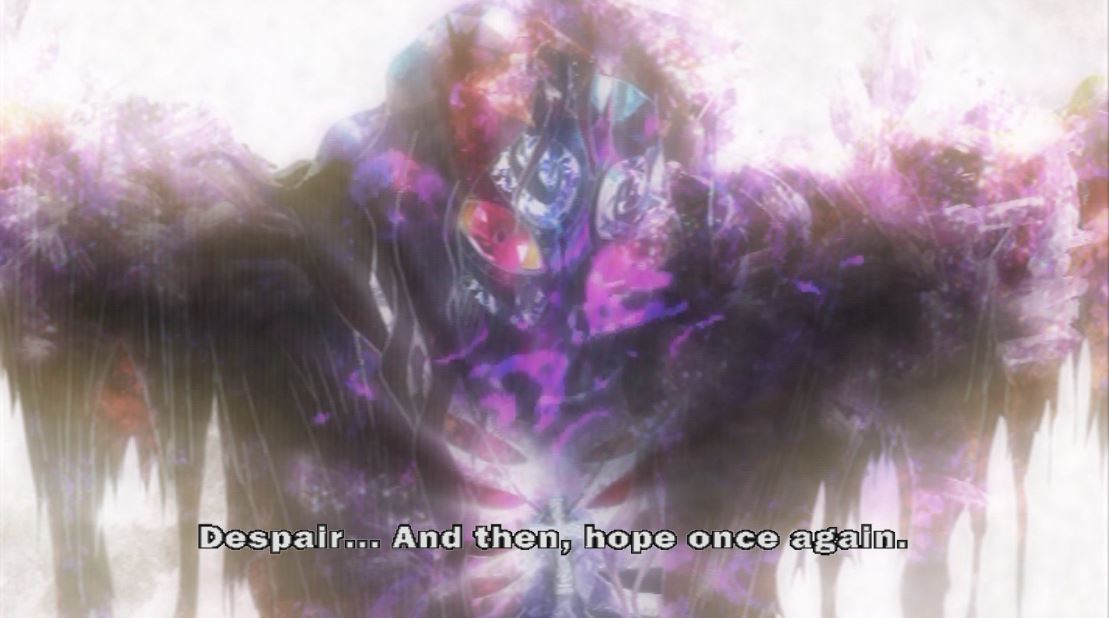 Episode Specifics: Finally ready to face the truth, Albert listens as the Count recounts his journey from trusting young man to embittered personification of revenge, including the fateful moment of bonding with Gankutsuou. The city around them is in chaos as Fernand, mad with power, bombs the city and declares martial law. Mercedes attempts to talk him down, and seeing that she can’t, tells him that she’s leaving him. Fernand shoots both her and Albert rather than allow them to leave, and nearly shoots himself before deciding he cannot die while the Count still lives.

From a falling shell splitting the bridge (of communication) between Albert and the Count right as Albert’s pleading his case for giving up revenge, to the Count leaving a table framed not unlike the Last Supper but seated at it completely alone, the visuals for this episode had exactly zero chill, and I’m deeply in love with it.

We’ve run into that good old “the series doesn’t really have a clear idea of how its political plot works” thing again. It’s not enough to drag the story down, but we do learn that Villefort’s stake regarding the letter was that he wanted to see the nonspecific Prince assassinated to stymie peace treaties and allow war profiteering to continue. Which is fine, sure. The series is so removed from the background political machinations that it wouldn’t have added significantly more impact for it to be about Villefort covering his own ass in an indirectly malicious brownnosing way a la Dumas (though it would have tied the three traitors more closely together thematically in their small-minded pettiness; while war profiteering is selfish, it’s far less narrow in scope than Danglars and Fernand’s initial reasons for ruining Edmond’s life). It winds up being a slightly different, less personal take on the banality of evil, though placing the reveal at the end of the story does have the side benefit of adding a genuine punch moment to name-dropping Noirtier that most versions lack. 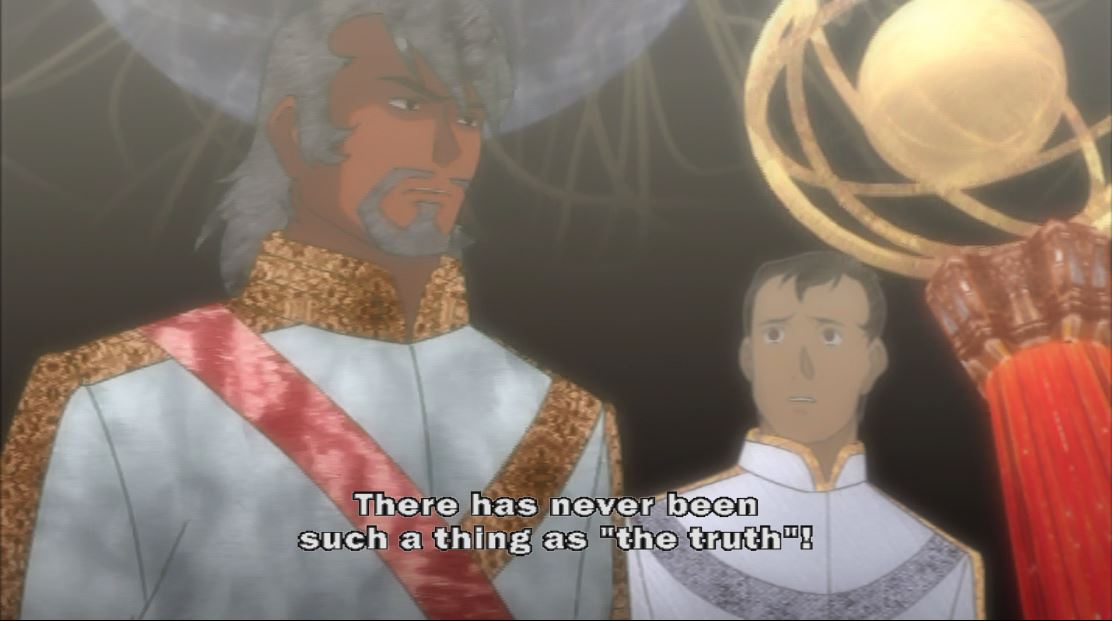 Character Spotlight: We’ve talked before about Fernand, and the fact that he’s not exactly a consistently written character in the novel (the fact that the Penguin Edition Introduction sees fit to point this out will never not be amusing to me). In going for bombast here in the final moments of the series, Gankutsuou has done a world of good in giving Fernand a feasible character arc from “jilted lover” to “war criminal.”

The “childhood friends” angle manages to work here not just to add parallels to the younger generation or give an additional level of betrayal, but to add to Fernand as Edmond’s foil. Fernand, it seems, was just as deeply affected by Edmond’s arrest. For him, that night taught him that lies are an effective way to change the world; not only that, but if you sell your version of the truth well enough, then it effectively becomes the truth. One gets the impression that there was a series of escalations that led from the impassioned crime of framing Edmond to deliberately selling out an entire culture for his own well-being, each coming back to that root cause: if I want it, I can make it true. The fact that I’ve done it and my enemy hasn’t only means that I’m smarter and more deserving than them.

Even the reference to the original’s suicide works better in this context. Having realized that his actions have consequences in a real and brutal way after shooting his family, Fernand has a potent in-character reason to consider ending his life. That moment of realization has the power to reflect back not only on the last few minutes, but the last 25 years. That he keeps going in order to kill Edmond is a liiiiiiiiittle bit “because the plot says so,” but is also in line with the lifelong resentment he’s voiced, and it makes sense enough that he would cling to that with renewed intensity in the end.

Courtly Intrigue Update: There’s a certain amount of smiling and nodding to be done now that we’re in the Action Climax of the piece. Yes, sure, Fernand has accrued information about all the weapons that could possibly be used against him over his military career. That checks out with the man he became. Okay, he rose up in the ranks so he probably knows enough about military vessels that he can operate them directly rather than needing a crew to command. And I guess the future has…single-person operable battleships? Fine, okay, thematically and visually appropriate. Meanwhile the streets are full of escaped criminals and the total breakdown of law and order for the sake of one man’s ego, a society-wide reflection of what happened to Edmond.

What I’m really impressed with is Mercedes. This still doesn’t make the most of her that an adaptation potentially could, but she still spends the final stretch realizing she has to take action within the bounds of what she knows. The ambiguity over whether she was at least fond of Fernand due to their long years together, if not in love with him, gives the scene something more to lose – Fernand didn’t just have everything taken from him, he threw away what he potentially had because of his own self-delusion.

Adaptation Corner: The 2002 trainwreck we covered marks the last big budget Hollywood adaptation of Monte Cristo, but it isn’t for lack of trying. The 2002 film came right as the bottom was dropping out of the 90s Period Piece craze, and once the Grim n’ Gritty Superheroes market really exploded, it didn’t leave a lot of clamoring for costume dramas. Which becomes very ironic when one considers that the COMC film that was rumored starting around 2009 was supposedly going to be directed by David Goyer. David Goyer, the writer of Batman Begins.

One imagines it would be yet another very Hollywood drama focusing on Edmond as a Dark and Troubled Hero, possibly/probably saved by the Power of Love at the end. Lots of brooding, lots of greys and browns. Not just because that was the feeling of the majority of late 2000s action films, but because as time’s gone on that’s all that remains of the public awareness of the COMC narrative: “a falsely accused man gets his revenge.” Over time the edges have worn away enough that the very basic nugget is what people go in for, and that in turn has led to fewer direct adaptations in favor of “hot takes” of sorts that transplant the base idea into various AU contexts.

Case in point: while no one’s talked much about Goyer’s COMC since 2013, as recently as 2016 there was mention of a modern crime underworld version of the film titled simply Count. Because of course it is.

Themes: The storytelling is in an odd place, as a good chunk of the episode is dedicated to telling us backstory that’s already been shared or inferred. And yet, it’s not a budget saving maneuver – even scenes we’ve already seen are newly animated from new angles rather than reusing footage. Because of this, the point becomes not necessarily the revelation of information, but the act of privileging certain narrators.

Much of Gankutsuou’s story is about privilege, and who that privilege silences. Major moments of revelation come from silenced voices: from Noirtier, a witness to war crimes and betrayal if no longer a revolutionary; from Beauchamp, a commoner among the wealthy class who champions the cause of truth even at the expense of his friendships; from Haydee, a woman and a slave cast down by Fernand’s ascent in the patriarchy; and finally from the former Edmond Dantes himself, whose story is key to the part of him that’s still human.

Albert asking for the Count’s story – wanting to hear a person’s experience from their own mouth – is his biggest moment of character growth in the series. While he’s always wanted to help others, his previous efforts were usually based on someone else’s observation and his own bias (see: his reasoning in helping Valentine escape her family). While his heart was in the right place his actions were often selfish, and as likely to harm as do good. Rather than opening with a plea for the Count to stop his revenge, he waits until he knows the full story and acts upon his conscience as well as his feelings. That’s one hell of a mature move for a tiny, tiny 16-year-old still in mourning.