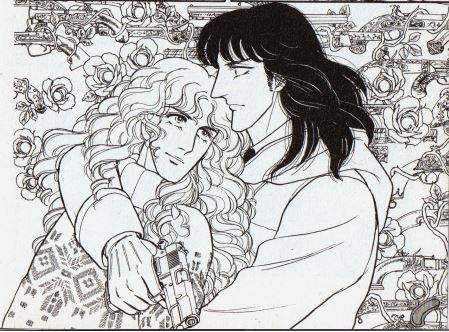 The year is 1976. Dashing and romantic art thief Dorian Red Gloria, codename Eroica, rescues the young supergenius psychic Caesar Gabriel (who is desperately in love with him, of course) from NATO. He’s pursued by the dogged agent Major Klaus Heinz von dem Eberbach to the frozen edges of the earth, where the newfound rivals find themselves stranded and at a stalemate. Forced to bunker down together while waiting for rescue, Dorian realizes that he has far better chemistry with the prickly Major than his unspeakably bland love interest. And thus 40 years of unresolved sexual tension begins in earnest.

From Eroica With Love suffers a similar curse to Lupin III: it’s a 1970s manga that maintains steady popularity and is still published (albeit sporadically) in Japan to this day, but it’s basically unknown here in the West. Perhaps fitting, given that Eroica also centers on a found family of thieves and their episodic shenanigans whilst they’re pursued and sometimes allied with an agent from an international police agency. (Heck, the first chapter of Eroica even features a Zenigata clone, and Sayo Yamamoto later borrowed the character design of Dorian’s assistant James for Lieutenant Oscar in The Woman Called Fujiko Mine.) But while Lupin was kept from U.S. shores largely because of the extremely angry estate of Maurice LeBlanc (a story for another day), Eroica’s obscurity is a bit more circumstantial.

Tagged as: Anime Feminist, From Eroica With Love, Manga