Episode Specifics: Albert runs to tell the Count what he’s learned, but finds he’s too late – the Count has already left to exact the coup de grace of his revenge. Trying to escape with the last of his fortune, Danglars is marooned on a ship lined with gold bars and no way to change his course; and on the day of Villefort’s trial, Andrea nee Benedetto not only proves himself as Villefort’s son but stabs him with a needle coated in brain-rotting poison. As Fernand makes an act of war, Albert and the Count meet once again.

The madness filter gets quite the workout this episode, going all out to really capitalize on the “fate worse than death” thing. Arguably it’s a little over the top, but it’s hard to deny the effectiveness of the colors playing like oil on water. Even before those moments, the lighting’s pretty stunning, with hellish reds in Danglar’s scene and sickly greens in Villefort’s hospital room. They’re such small moments of gloating, really the final piece setting off the dominoes, but the scenic design captures the feeling that this is both triumphant and sickening.

Danglars gets off light in the book, comparatively, successfully skipping town after the Count bankrupts him. As for Villefort, the story can’t go the route the book takes since Heloise and Eduard have been saved, and that leaves Benedetto to deliver the final blow. Which is fine enough and perhaps better, since the scene shifts the timing of Villefort’s moment of remorse from shamefully verifying Benedetto’s story and renouncing his position to cracking only with regards to the idea of seeing his lost son.

Also, it’s been a while since I reminded you that 90% of the novel characters are unmitigated pricks. Here you go.

‘Just think! I briefly considered marrying his daughter,’ said Debray. ‘Poor child: my God, she did well to die!’

The strangest thing about the reworking of Villefort’s trial is that the script makes the briefest of nods to its future setting by acknowledging that DNA testing is happening somewhere, but in the end the beats come down to the same antique presenting of the coffin and the scrap of cloth with a damning emblem. Of course it’s that way because it’s far more dramatic and satisfying, and gives Tomokazu Seki a chance to really show off his chops one more time (readers might know him recently as Yotaro in Showa Genroku Rakugo Shinju). But it’s one of the few really notable bumps in the whole FUTURE FRANCE thing alongside…well, Franz’s whole situation, basically.

Character Spotlight: Rather than discuss one character exactly, let’s take a moment to look at Edmond’s three betrayers as aspects of the Count – an element that was always there, but that most versions don’t capitalize on since both they and the original story were melodramas interested in keeping us largely in the Count’s perspective and sympathy. With the changes in narrative structure here, we’re in a full Batman’s rogue gallery situation.

As noted below, the money spent used in Danglar’s final send-off alone could’ve fed thousands of suffering people or saved them from being preyed upon by men like Danglars. Villefort’s rantings about upholding the law aren’t so different from the Count’s unshakable dedication to vengeance, even as he grows more and more detached from the idealistic young man he’s supposedly avenging. And neither Fernand nor the Count care much about Mercedes’ feelings in the end, but rather how having or not having her is relative to their status as men. Each as well are more than happy to make use of those around them to advance themselves.

Putting aside the reasoning of his connection to Albert and Mercedes and narrowing down to the “big fish,” this is reason enough to switch things around and make Fernand the last rather than first target. As the anime orders things, the Count is gradually stripped away of each of these things. He abandons his home and expends his wealth. His body becomes crystal and he stops feeling a need for vengeance so much as he simply cannot stop. Until finally, it’s stripped down to raw, ugly violence. 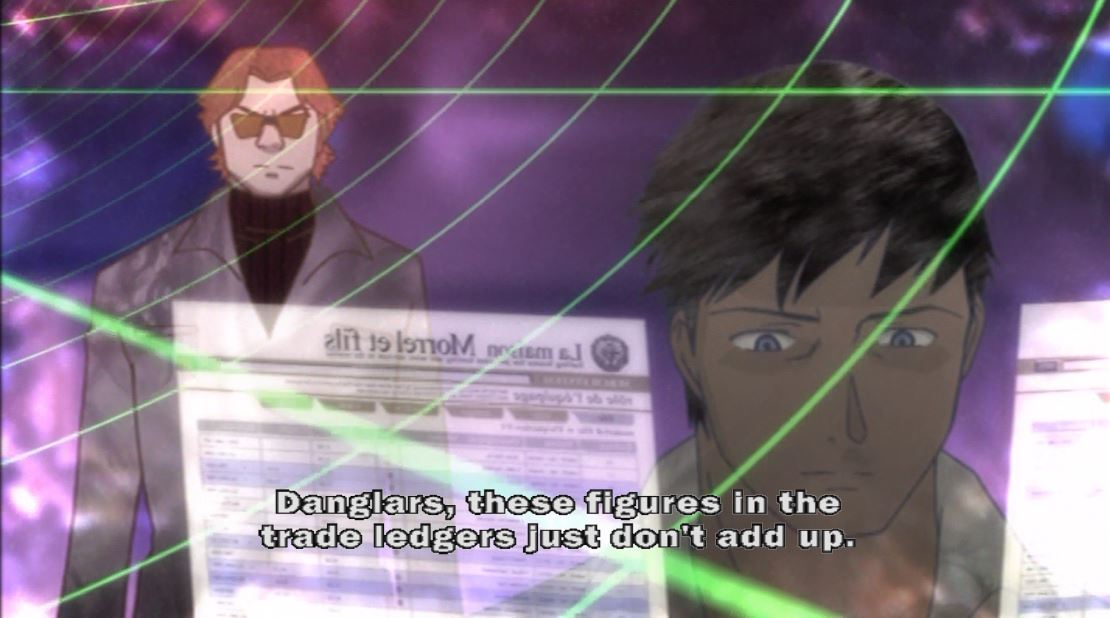 Courtly Intrigue Update: Here’s a thing that most adaptations never talk about (which I assume wasn’t an issue of the original because there was such constant social upheaval anyhow): Edmond’s plan involves knocking off three pretty influential figures in Parisian society in short succession. Yet there’s almost never a sense of how these actions ripple out to the public at large, to other people who probably aren’t much better off than Edmond was.

We’ve talked before about the presence of the nebulous “public” mentioned at various points throughout the series, and these scenes in the final episodes are where they’re most effective (here and later when Fernand imposes martial law) – as the Count has his final moments of triumph with Danglars, we hear about crowds of people trying to get their money back in scenes reminiscent of the Great Depression. Outside it’s chaos, people are starving, but it seems all that matters is that this ship full of gold bars that could’ve fed thousands will drift off as the single cruel man inside slowly starves to death. 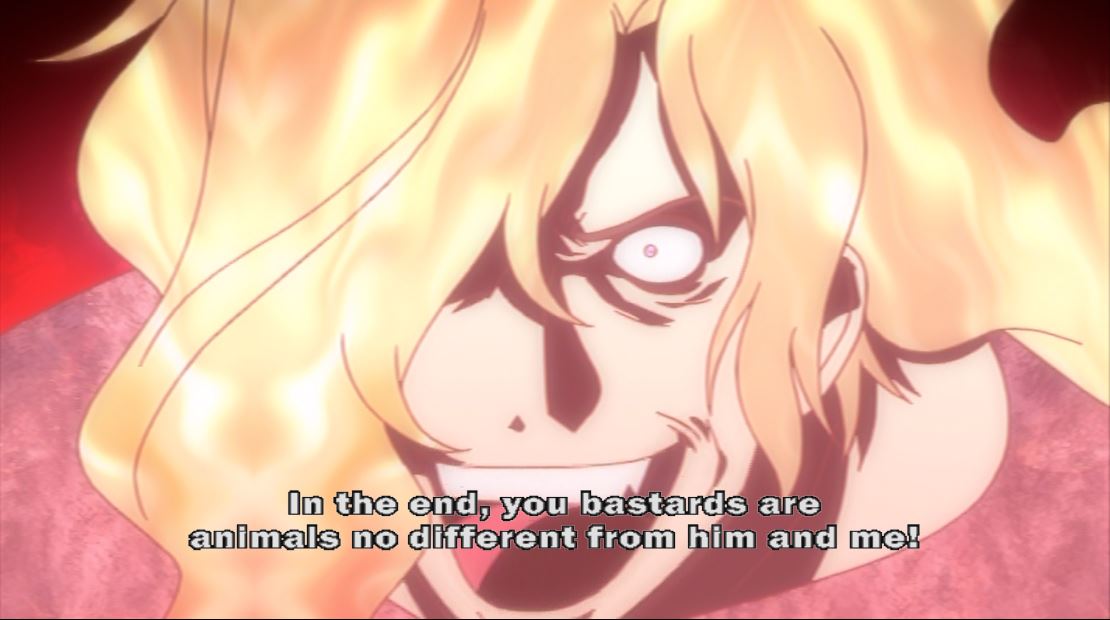 Adaptation Corner: 2002 featured the last (putting aside the talk of another attempt that’s been circulating for a few years) of the traditional big budget period piece film adaptations. It’s also the worst. It’s not a great film in general, but as an adaptation it’s downright abominable.

Its biggest change is that, like Gankutsuou, it decided to make Fernand, Edmond and Mercedes childhood friends. This plays out in an entirely one-sided way (there’s never a sense that Fernand once loved Edmond and then got bitter; it’s “fuck that guy” straight across the board, which makes Edmond seem unbearably stupid) and yet is also the central conflict we keep touching back on – this Edmond escapes the guards only to be turned in by Fernand, and the film ends with a sword fight on what I….think? is meant to be the isle of Monte Cristo? Sure, fine.

Also this is the version that most strongly contributed to the misapprehension that Albert is Edmond’s biological son. Because otherwise what reason would he have to care about him, I guess. Also Mercedes never loved Fernand, she only married him because she was pregnant and would definitely have waited for him forever otherwise. Because if she’d wanted to not wait around and put her life on hold for a dead man or a supposed convict, fuck her I guess. While we’re at it, Abbe Faria is a discount Mr. Miyagi now who teaches Edmond swordfihting, Danglars is like 40 right at the beginning of the story, and all the servant characters are condensed into Jacopo, that one sailor Edmond traveled with early on and basically always gets cut. Sure. Why not.

But really, Edmond is dumb as a post – he gets his incriminating letter from ACTUAL EXILED TRAITOR Napoleon in this version and thinks nothing of it, because the film also assumes that its audience is dumb (there’s a torturous metaphor with a chess piece that I’ll spare you from). Edmond smarming “can I steal your wife…..for a waltz” is about the height of the script’s wit. Also Edmond and Mercedes don’t just get back together, they fuck after she presses him to confess his identity. Because it’s only love if their bits touch.

Anyway, this film was a waste of celluloid, and Jim “Jesus” Cavieziel might be the blandest Count on record. I’m including the dog.

Themes: A long time back, Andrea had a line telling Albert he was the only one who could understand the Count’s feelings (because Albert was deep in the throes of his adolescent crush, a subject we’ll come back to when The Scene happens). Now that moment’s come back around to explain itself, while at the same time Albert’s finally hit upon his own epiphany about the Count’s “true feelings.”

In Andrea’s case, it seems to come down to that scrap of cloth. He comes to court to wreak hell on absolutely everyone and burn the place down around his ears…and yet when he’s arrested, he carefully tucks the scrap back into his pocket as if it really were the most important thing he owns. That tenuous grip to something that was once a source of hope (which Benedetto carried in his own prison of abandonment) in the middle of a garden of destruction becomes the explanation for what Benedetto and the Count had in common.

As the series goes on and the Count loses more and more of the man “Edmond Dantes,” he becomes almost a kind of cipher. He shares the worst vices of the men he dispatches. He draws the eye of a downright chaotic evil aid. Even Baptisin, who ultimately encourages Albert as a roundabout means of hoping to save the Count, seems to project images of what a man must do “in spite of everything” onto his employer.

The only thing that makes Albert’s conviction any different, at least on the surface, is that his goals are constructive rather than destructive. There’s more than a fair share of hints that the Count sees his younger self in Albert, which is more or less borne out by glimpses of flashback – which come so late as to be almost beside the point, something that I kind of admire after watching eight million adaptations that can’t get out of the Chateau D’If until the halfway point. It’s interesting to see who the Count was, but it’s beside the point this far down the road, and the story knows it. No amount of harm done to him, it implies, could explain or balance out the number of lives he’s ruined; not even the lives he saved by convenience balance the scales. The ways in which Albert is like the Count are only of tangential importance. What matters is how he’s different.