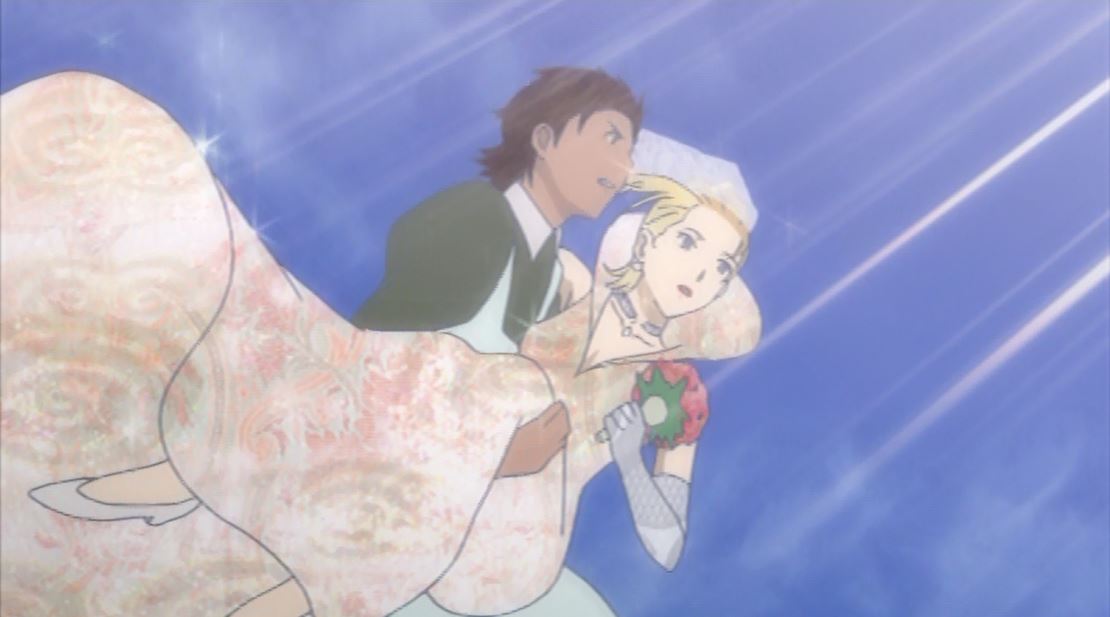 In which Eugenie gets to escape from the meltdown of the world around her, while the rest of us look on in envy.

Episode Specifics: In order to shore up the Danglars family finances, Eugenie is forced into a hasty marriage to Andrea. Fortunately, on the day of the wedding Albert is there to intervene (with help from Peppo), spiriting Eugenie away just as Andrea is finally unmasked and arrested for his many crimes. The two old friends and young lovers bid farewell as Eugenie leaves for New York to study music.

Before leaving, Eugenie delivers Franz’s letter, which urges Albert never to hate anyone. Thinking on those words, Albert decides he needs to speak with the Count one more time.

All my kudos to this episode for continuing to have Franz feel like an active missing piece throughout this episode. While there’s still a focus on Albert and Eugenie’s young, lost love, it refuses to forget that there’s a major part of their lives that’s missing now, and smooching doesn’t make up for the strength of that bond and the pain of its loss. It would’ve been easy to have Albert read Franz’s letter alone, or to exclude him from the memory of sneaking into Eugenie’s house. Instead, those scenes excel at depicting quiet, ongoing grief – having a few moments, even days, of feeling stable or happy only to be unexpectedly unbalanced by a mundane detail.

This is easily the most unabashedly wish-fulfillment episode, a pure moment of swashbuckling heroics in order to let the audience rest between Franz’s death and the finale. Why is Albert jumping out a window? Because it makes a great sweeping moment. How did Eugenie get a plane ticket without any familial assets on her or Albert’s part? I ‘unno, someone in their friend group got the funds together so that she could leave as soon as possible, to go to the conservatory she’d presumably not answered the letter from.

There are a lot of stray details that happen because they need to in order to make the emotional payoff work. And work it does, making it hard to begrudge the points of glossing in comparison to, say, Valentine’s rescue. I would couch the farewell between Eugenie and Albert as one of those things that requires extrapolating that they won’t be getting back together…but I’d say that’s something best saved for discussion in the finale.

Character Spotlight: Peppo is the best. Everyone go home. Now that Franz has ascended to the status of fondly remembered tragic gay, Peppo gets to take the crown as best living queer character. Our compulsively lying brat managed to make good without having to bite the bullet and everything. As a character who only exists for a fraction of a second in the novel (though we’ve gone fully into taking the book’s plot points as loose suggestions at this point), it would’ve been very easy to kill her off for cheap shock value or yet more people sacrificing themselves as cosmic atonement for Albert’s bad decisions.

Instead, Peppo comes the closest to embodying the sense of freedom in the ongoing class struggle (though not quite; more on that below).

She’s able to disguise herself without losing her sense of self, a la the Count. She’s blunt and crude, but she’s not self-deluded like Albert is for much of the series. And unlike Franz, she isn’t constrained by nobility when she’s finally moved to act on her conscience (and I’d likewise point out in her favor that her involvement in the con ends before Franz’s death – the point at which the people who don’t “deserve” any of this start getting hurt).

In another sense, she’s the pawn on the other side of the story – as much unable to act for the majority of the story as the other children, constrained by parents and their expectations, but equally possessed of morality and a willingness to shake off those shackles now that we’ve come to an episode about turning over new leaves. And off she goes, in the end, to start her new life the same as Eugenie. Both with nothing, both imbued by the series’ optimism that they’ll wind up somewhere worthwhile (and yes, she does; which adds about eight million points in this series’ favor). 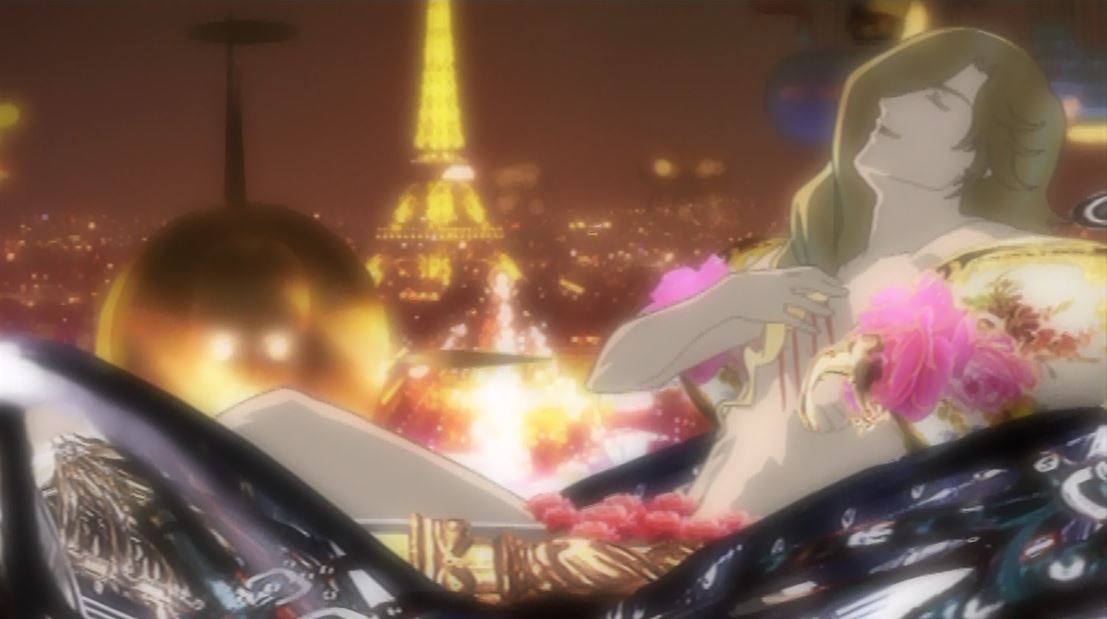 Courtly Intrigue Update: Just what does it mean to be ‘free?’ We have a pair of no-longer-aristocrats this episode: the unmasked Andrea AKA Benedetto and the apparently stripped of title and position Albert, the latter of whom is able to disrupt the ceremony and help Eugenie escape. But in practice, it seems like those still inside the system (Lucien in this case) are romanticizing what it’s like to be outside.

Outside the aristocracy you can barge into weddings and say how you feel, but it has its own restrictions. There are monsters like Benedetto, from whom those without power aren’t protected for shit. There are people like Peppo, who seems genuinely remorseful of her actions but carried out her orders because someone had taken her in when she had nowhere else to go. And Albert will always have an advantage, because he was educated in a manner befitting a noble before losing his title. He has skills someone born with nothing will never have.

Of course, the show is also full of “false” aristocrats, suggesting that as far as this world is concerned the real trick is looking the part and lying, cheating, and stealing until you get there. A perfectly fine approach when looking at the old generation that our young protagonists are meant to be breaking away from. Buuuuuuut come on show. Let’s not pretend that Albert and Eugenie are a damn sight better off for being born in that world than if they hadn’t been.

Now granted, it’s not the world’s worst idea. I’ve read plenty of fanfic in my time, so I’m all for “that one story but with more fucking” books if they’re well written. And, as I’m sure you can imagine given how I’ve gone on about the dismissal of Mercedes’ suffering in most adaptations, I love the idea of giving her a chance to be the focal character.

Unfortunately, it lost me pretty fast. Basically around the time the book decided that it wasn’t enough that Mercedes be married to Fernand out of pity while he becomes increasingly distant and horrible. Nay, it turns out that Fernand merely married her to be a beard. And were it not enough that he (gasp) PREFERS MEN, he brings home partners and forces her to engage in regular group sex.

I mean. I haven’t seen the equivocation of queerness as vicious deviancy for the unsuitable romantic rival since the mid-2000s. That is an OLD SCHOOL bad taste in my mouth. At any rate, obviously Edmond is the (heterosexual and manly) only man she ever loved, she just KNOWS it’s him but the Count won’t admit it, she’s still the one who convinces him to give up on revenge but there’s a lot more boning involved. It’s only 180 pages, you’re not getting much more than that.

Themes: Hatred starts out as the feeling of caring about someone. I thought about coming down harder on this sentiment, given the preponderance of real-world reasons to remember that hatred is quite often born of fear. But somehow, I can’t quite bring myself to. Part of it is the emotional logic the series shapes itself by, most heavily in how the Count and Albert’s relationship evolves (which we’ll cover next time), but the other part is how this sentiment relates to Eugenie’s role in the episode.

The question of loyalty is lurking at the back of this episode, as it often is, with the scene of Eugenie’s mother quietly pretending none of this is as fucked up as it is contrasted against Bertuccio’s declaration of loyalty to a man clearly planning to leave him at loose ends contrasted against Peppo’s decision to help Albert in a way that’s selfless without being self-destructive. There’s a range of what it means to be “selfless” or to act for the supposed greater good, with the youth once again being allowed to showcase the truest expression of that sentiment. Peppo and Albert both give up the person they loved, earnestly willing to show their devotion in a way that helps the other person more than themselves.

As for Eugenie herself, she doesn’t turn to hatred. But not in the sense that anyone sits her down and says “you know, you really shouldn’t be upset about what happened to you because of X, Y, and Z.” She just leaves. She escapes their sphere of influence and goes on to do what makes her happy, and probably they’ll never know about it. She chases her own happiness, which she doesn’t owe them a damn bit of – not news, not connection, not even reconnection.

By the series’ example, “not hating” someone doesn’t necessarily mean forgiving them, though that will be part of Albert’s arc. It means not destroying yourself over them. Their definition of hate is entirely bound up in how that emotion leads to consuming self-destruction, whether or not you successfully get back at those who hurt you. And their answer to what to do instead, for this young kid jerked around and neglected and abused, is to say “fuck em, they’re not your family anymore.” I can get behind that.