The Consulting Analyst – Even If I Should Stop Being Me

ONCE MORE WITH FEELINGS, BECAUSE IT WASN’T PAINFUL ENOUGH LAST ROUND.

Episode Specifics: Shaken to the core by Franz’s death, Albert tries to run away from Paris only to run afoul of petty officials too happy to remind him of how far his family has fallen. He’s saved by Renaud, and in talking with his friend realizes that he wasn’t the only one affected by losing Franz, and that running wouldn’t do anything to honor Franz’s memory.

Elsewhere, the Count closes in on Danglars, flooding all his stocks with buyouts and plunging him into bankruptcy. Desperate, Danglars decides to rush Eugenie’s wedding to get at Andrea’s fortune, regardless of what she wants. And Andrea, now secure, is free to show his true, horrible colors (he’s the fucking worst, and that is a coveted title this episode).

Now, I think that by and large Gankutsuou is a show that knows how to use visual metaphor and motif pretty artfully. That may be why I started laughing at the SUBTLE CHESS METAPHORS going on this episode. It’s been a threaded motif up to this point, and the scene is quite poignant in its own right on the power of Akiko Yajima’s performance – it’s painfully clear that while Haydee knew the Count’s plans intellectually, deep down she considered herself an exception, and him to be a better person (and maybe he was, once). And then merrily in the background, the computer voice shouting out CHECKMATE, juuuuuuuuuuuuust in case we didn’t get it (far more effective is another silent deployment of Gankutsuou itself in the aftermath).

Ideas of cycles are big here – Franz and Albert’s relationship begins and ends at a funeral, Albert seems as if he’ll continue the cycle of vengeance but is stopped by the thought of What Would Franz Do (not that he’s completely grown up – yes, Albert, OBVIOUSLY YOUR MOM IS GOING TO LEAVE YOUR DAD NOW AND SHOULD NOT HAVE TO HEAR ANY GUFF FROM YOU, YOU DUMB ASSHOLE BABY); and Haydee, ever Albert’s foil, also realizes how destructive revenge has been to the Count from within her own grief. The idea of repetition but with one crucial, different element is echoed even into the scene of the two countryside drives, as our characters move from innocence to experience with all that implies.

Character Spotlight: As the field of relevant characters narrows and we approach the endgame, it’s natural that we’re going to start mostly running into repeats from here on in. So, Eugenie. Her character is sometimes exceedingly frustrating. Within the constraints of the narrative, she’s exhausted all options available to her: all of the second generation kids are younger than their novel counterparts; she’s isolated, with one close friend dead and the other missing, she has no financial assets or worldly skills (and we see how well it goes for Albert when he tries to run away on his own), and she fights with the few options she does have to change her situation (the script for this episode even shows off how astute she is in the worst way, as her prediction that her father would sell her to Satan for one corn chip does indeed come to pass).

At the same time, the writing quite blatantly moved the goalposts in order to PUT her in this situation, by removing Louise’s character and nudging Eugenie’s overall personality toward a presumably more palatable archetype in the process of giving her genuine feelings for Albert. The guiding hand of This Is An Anime and We Need A Damsel is painfully obvious here, where in most places the transition is smooth and justified by the adjustments to the overall narrative. Franz might’ve died in service of Albert’s character arc, but it was about and served MORE than that. Eugenie, at this point, is increasingly defined as “the person Albert can save when he couldn’t save his other love interest Franz.”

And this, too, is somewhat mitigated by having the two part in the end, but it feels egregiously anime-y just in comparison to itself (after all, we’ve covered plenty of adaptations that just replaced Eugenie with Valentine in order to give the audience a more docile girl with no aspirations beyond being a fiancée; one can at least say that Eugenie’s love of her music feels genuinely integral to her character, and not just a hobby to give her flavor as The Love Interest). 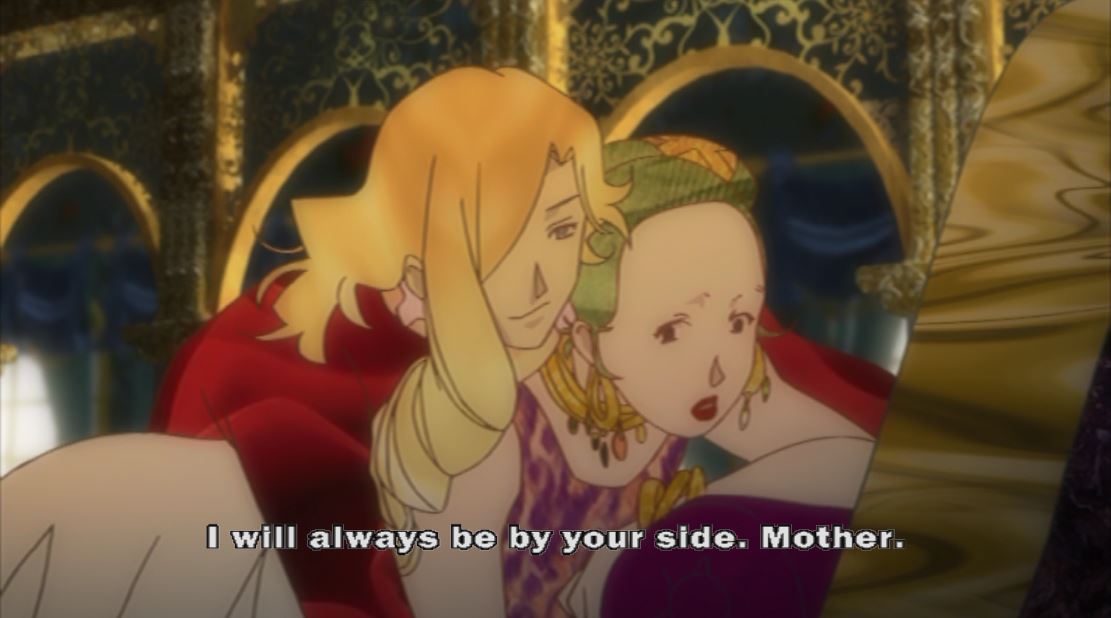 Courtly Intrigue Update: Hey, freedom of movement is a privilege and actually future Paris is perhaps terrifyingly autocratic! Huzzah! This is never quite as explicit as it could’ve been – the show still mostly portrays the lower classes as faceless or, in this case, people who are equally eager to be assholes when given a chance to hold power over someone themselves; not to mention that the actual power structures are about as vaguely sketched a fairytale with A Prince etc. – but it’s well-defined enough that when it crops up in the plot (in this case, we’ve had previous rumblings about the scandal surrounding Fernand impacting Albert’s social mobility and not just his reputation) that it doesn’t feel like a pull from nowhere.

Oh, and also incest is happening. Incest for days, if you hadn’t caught onto it at this point. It’s not a story about the idle, corrupt rich without some flavor of incest.

Adaptation Corner: Sooooooooo. Stephen Fry wrote a Monte Cristo fanfic. An extremely well-received one, at that. The book’s titled The Stars’ Tennis Balls in its native country, and Revenge in the US, where I suppose publishers thought American readers would be too stupid to recognize an homage to John Webster. The actual choice for a title change couldn’t scream condescending contempt any harder if it tried.

It might also be one of the smartest attempts to update the story while keeping it more or less intact that we’ve looked at here. Fry moves the story from 18th century France to the UK in the 1980s and has his Dantes (Ned Maddstone) committed to a mental institution for a drug-induced breakdown of self. The most brilliant change of all, though, is updating the Bonapartist rumblings that define so much of the novel’s context to a discussion of the IRA. It’s the only adaptation we’ve covered, including Gankutsuou itself, that manages to translate not just the immediate framing that affects Edmond’s life but the wider cultural implications and sense of paranoia and unrest that make sense of WHY it would be so easy for a single soul to slip through the cracks.

It’s also got a more bitter, villainous tint to the story, which you might’ve noticed we’re seeing more of as we move into the far more actively disillusioned turn of the 21st century. Not a lot of adaptations of the novel include, say, the fact that Edmond hung around casually letting Caderrousse bleed to death, for example. THIS ONE SURE DOES. In fact, it’s got an emphasis on brutality that even Ganutsuou really only matched with the Terrible Horrible Murder last episode – which makes the decision to end with Ned/Edmond losing his Mercedes analogue and ultimately returning to run the mental institution pretty bleakly fitting. Well done, sir. 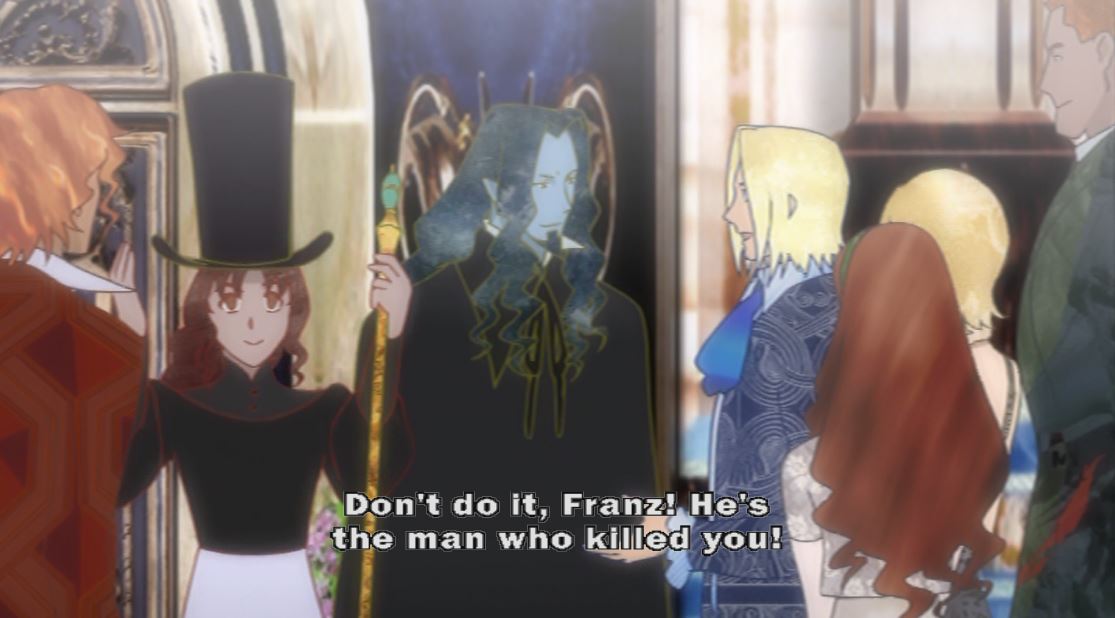 Themes: Remember last time, when I mentioned that Franz is the series’ most important character? This episode is here to hammer that home in case you missed it. Tip of the hat to Renaud for pointing out that Franz is guiding their steps etc. etc. As I mentioned last time, Franz embodies the ideal moral code of the series – he’s noble, self-sacrificing, loyal, and a seeker of truth. He’s also quite blatantly suffering a case of Tragic Gay – he’s ennobled, but partially by the fact that he’s resigned himself to never ever being recognized by the person he loves, and that love leads him to sacrifice himself and thus wake up our (less implicitly hetero than usual) protagonist.

It’s a very strange case, undeniably drawing at its core from a beyond tired trope (apparently we’re not SO far into the mystical, magical space future that compulsory heterosexuality has been slain) but also building far beyond the usual restrictions of this kind of story arc. Normally, this kind of sacrifice play would solely be for the benefit of the Tragic Gay’s not-ever-love-interest, conveniently teaching them a thing about themselves so they can go to their heterosexual love interest a better person, possibly never even tainted with the knowledge that their friend wanted to hug and kiss them.

Some of those elements are alive and well in Franz’s arc, though the series seems at least self-aware enough to try and mitigate some of them – Albert obviously carries Franz’s loss with him beyond the scope of that one event (you’d be surprised how rare that is), and he doesn’t end up with Eugenie either in the end.

Also, they are going out of their way to nudge you toward the thing I mentioned last week – that Albert could indeed have loved Franz, but it’s too damn late now (gee, I wonder why the script has Renaud point out that he too carried an unrequited love he never talked about right before having him note how much Albert obviously cares for his lost friend). 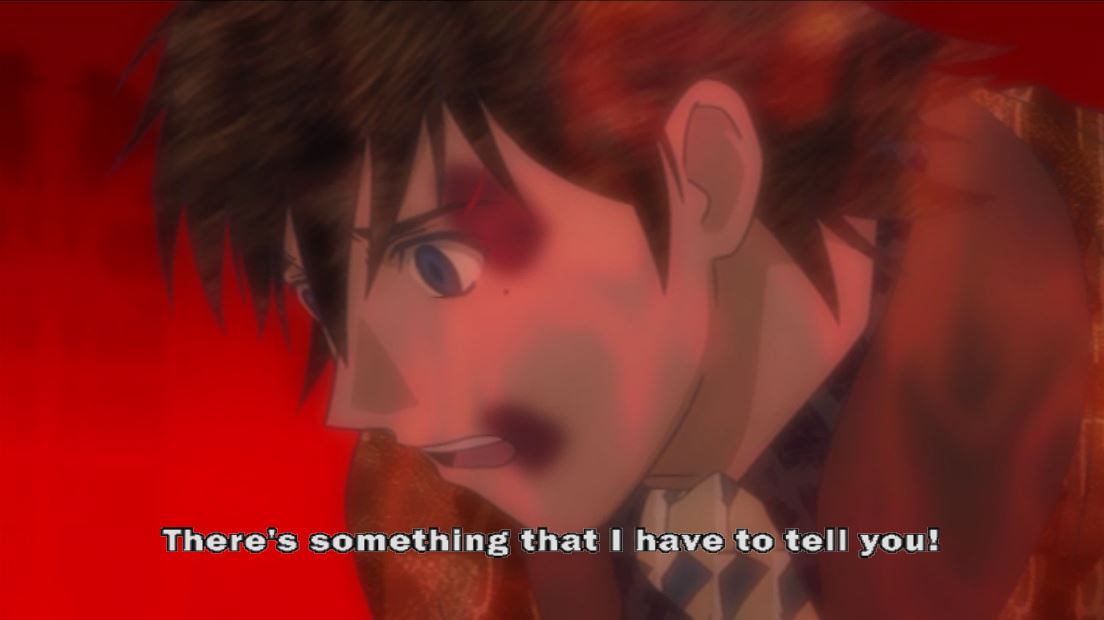 But more importantly, Franz’s loss feels important to the world and the story. There’s a time and a place to kill off a character with this much weight. Hell, in terms of the way it colors the characters’ actions for the rest of the series, Franz’s death feels most comparable to Kamina in Gurren Lagann. He’s the benchmark to which all characters who knew him hold themselves, and in light of his death it is fucking hard to feel anything for Edmond at all. We’ve broken to being entirely on Albert’s side, and the remainder of the series puts all its work into building up the events of the finale as actions taken with knowing, thoughtful agency on his part. None of that happens if you don’t remove Franz from the framework.