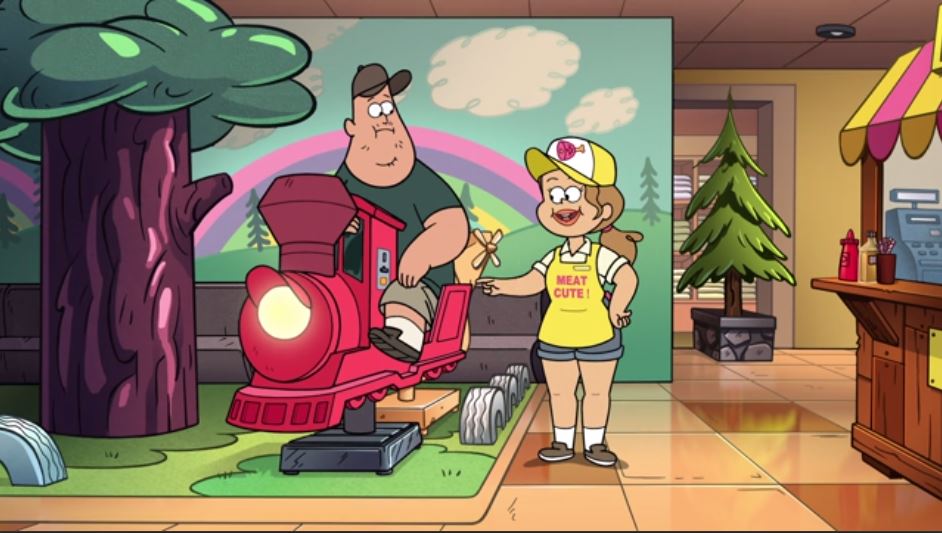 Oh, I knew we’d have to talk about this one eventually.

Soos’ cousin is getting married, and he needs help finding a date for the occasion. Dipper and Mabel attempt to give him advice, but it seems hopeless until Soos picks up a sentient dating sim called Love Academy 7 and falls for its heroine, Giffany. Meanwhile, Stan looks for a replacement for his ancient animatronic attraction, Old Goldie.

Every series has a low point, even if only relative to itself, and we’ve reached it. This episode has always felt strange to me, part of which I’ve always marked down to it being Mark Rizzo’s first script effort for the show (from this point he also served as story editor for a good chunk of the second season, and wrote a few more episodes). I’ve brought up before that the show is tightly conceived enough for it to be hard for new writers to break into the tone.

Even little things, like the fact that Soos is consistently our POV character for the A-plot rather than the twins, gives the script something of an uncanny-valley effect. It’s not even that Soos isn’t worth exploring – “Blendin’s Game” is a great episode, which packed in a lot more emotional resonance than this one in spite of keeping us primarily with Dipper and Mabel. So we’re already off on a wrong foot, and then it keeps hitting strange notes along the way. An “I’m alarmed I can’t determine your gender” joke? “Gamers are antisocial losers?” 2005 has called in to report a robbery of their heirloom jokes.

The biggest problem is Giffany herself (the proper spelling is “.Giffany,” but my word processor is already having a field day). While the release of Journal 3 retroactively tries to inject a bit of sympathy into all this by describing her as a rejected program on a quest to be loved (or die), that crucial element is missing in the episode proper.

This show set a standard for itself with its rounded antagonists, almost always taking at least a little time to give a glimpse of something pathetic about them (now that I think about it, Rizzo’s “The Last Mabelcorn” is also missing this element, but it’s made up for with Sam Marin’s go-for-broke absurd performance). And without it, the thrust of the plot kind of boils down to “bitches be crazy, am I right?” it’s beyond tired, and the show’s proven time and again that it’s smart enough to dig the necessary ounce deeper without sacrificing Giffany’s role as a villain.

All of this is that much more noticeable because of how many good moments there are to compare with. Stan’s rapport with Wendy is great to see, and the credits sequence is yet another fine example of GF’s song parody skills. And the visual design for Giffany is stupendous, from the particular animation of her movement against the real world to the use of her neon color scheme to overwhelm and later intimidate. It’s really well realized, a one-up on “Fight Fighters” – which already looked pretty nice – and it deserved a better foundation to work from.

Also, Melody is great. Makes a strong impression in only a handful of minutes, has solid chemistry with Soos and is satisfyingly active during the fight scene, and has an adorably pudgy body type that you almost never see used for characters in animation (not “good” characters anyway). Little bit of a shame the plot necessarily sets her up as the perfect match to contrast with Giffany (of course she seems agreeable and appealing, Soos; you’ve just met her and you haven’t talked about anything serious yet), but on the whole she’s a great addition to the overall mythos. 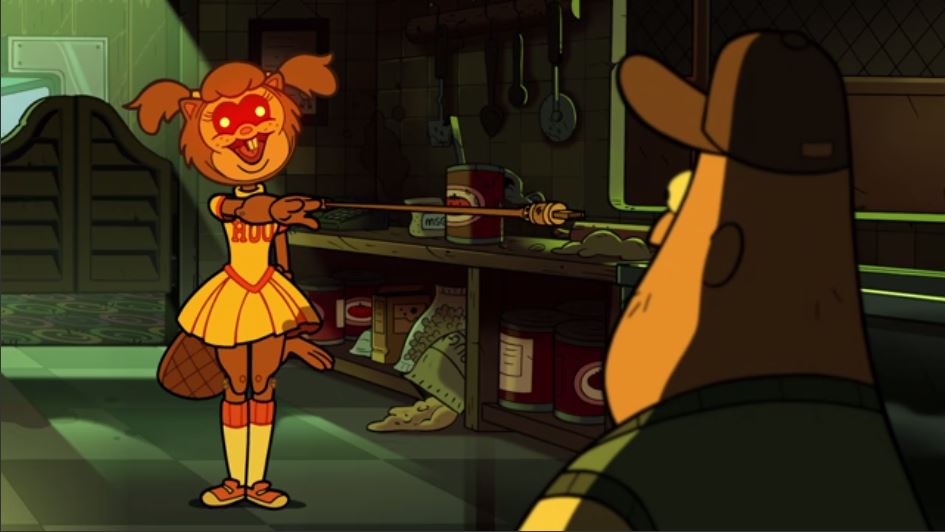 In a strange moment that must be bittersweet in retrospect, the design of the game store clerk is based on Alex’s then girlfriend. This information got around because this person became, briefly a go-to of sorts for the fandom to ask silly questions and, initially, in hopes of getting their questions to Hirsch (all of this ended with their breakup midway through season two, which is part of why I haven’t shared her name here).

The Gravity Falls crew didn’t interact much except in very controlled settings like pre-planned Twitter Q&As or the two famous AMAs over the course of the series. They also kept a Tumblr with things like storyboards and concept on it, which is pretty common these days – though The Mystery of Gravity Falls (now defunct thanks to some manner of cease and desist shenanigans that were so confusing even Hirsch didn’t know what was up, since he was a fan of the blog) was by far the day-to-day destination.

Oh. And no, it’s not a Five Nights at Freddy’s reference. But the episode premiered not long after that game rocketed to fame (younger folks perhaps not knowing how long it takes for animation to go from pitch to premiere), so you can bet there were eight million questions about it. 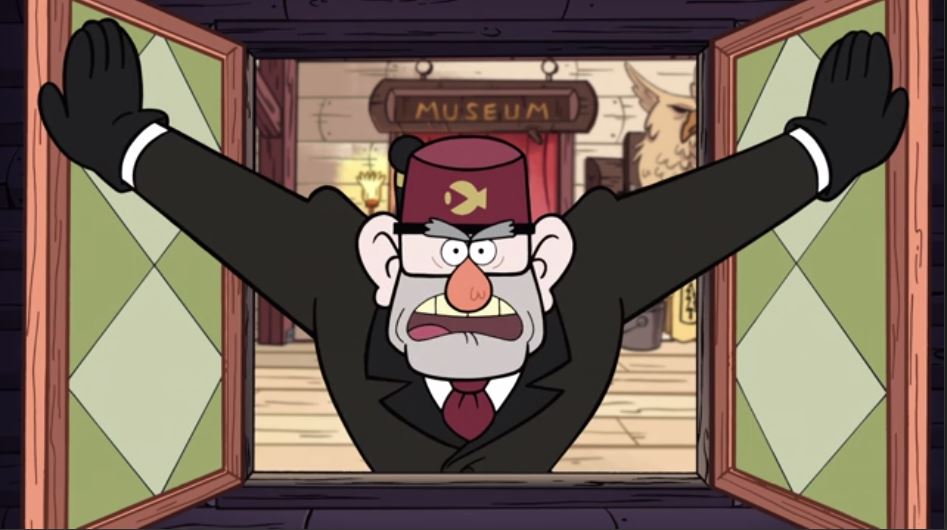 PAGE CIPHER: Winning Hearts By Daylight! Possessing Robots By Moonlight! Her Emotional Baggage Is A Real Fright! She Has The One Name Giffany!

“Bearo” (you can see his picture on the cipher page) is a reference to Mabel’s stuffed puppet, who makes an appearance in the between-season shorts. Which in itself is a reference to Dipper’s fear of puppets (and apparently the cause), which was discussed as a possible episode plot (as part of a Labyrinth homage) at one point before being scrapped. 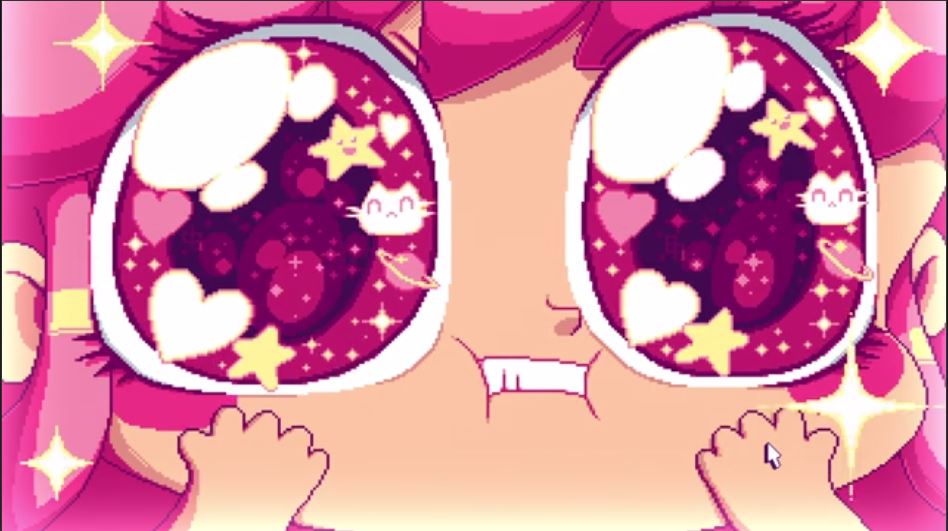 I remain somewhat despairing that references to Stan’s terrible, no good, very bad and desperate criminal background, but the details will ever be left to headcanons. Much of it is  not appropriate for twelve year old ears, I’m sure.

There’s an addendum in Journal 3 stating that Giffany was not destroyed with her disc, and that she actually jumped into Fight Fighters. She’s “currently attempting to make Rumble McSkirmish her boyfriend.” Which is somewhat impeded by the amount of fire and lightening they throw at each other. This is…pretty charming, actually. Seems like a good match with the ability to a) shoot back and b) respawn in case of death.

Also, I remain impressed that Soos and Melody’s romance takes place almost entirely offscreen, but their initial chemistry was so well-sold that I was delighted to see them apparently – living together, I would guess? To work at the Shack in the finale. Adorable.