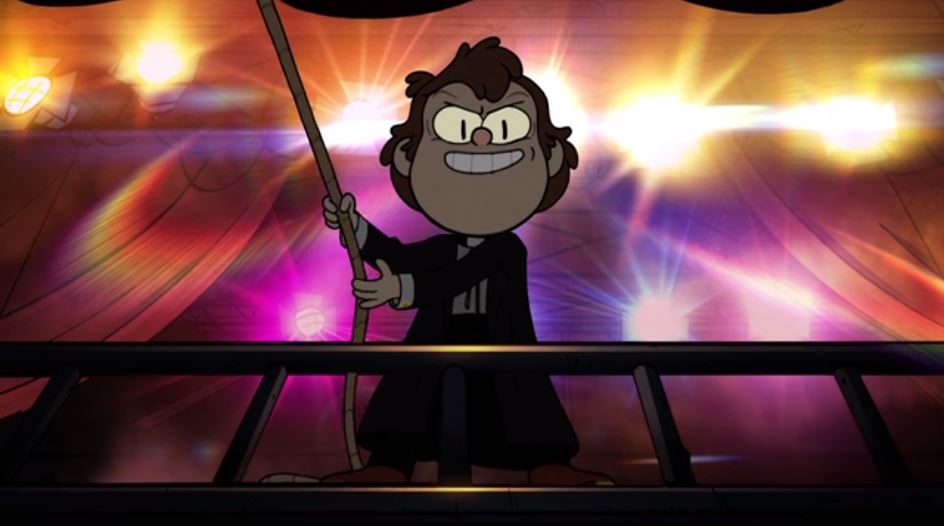 Soos has fixed the laptop the group found in the Author’s bunker, but its secrets are locked behind a password. With Mabel too distracted trying to impress some new boy to help out, Dipper gets desperate enough to accept a deal from Bill Cipher – who promptly hijacks Dipper’s body in order to destroy the Journal.

While later episodes feel packed to the gills, formatted in such a way as to make use of every second of runtime, “Sock Opera” stands out as an episode that desperately needed to be about five minutes longer. Alright, “need” might be a slightly misleading term. This is a great episode – one of the greatest in the show’s arsenal, in fact. It manages to hit its emotional beats concisely and is smart in deciding to keep things focused on the twins above everything else. But wow, wowie wow, is there ever not enough Bipper in this episode.

That’s probably what makes those scenes so compelling, of course, but there is an absolute goldmine of “characters react to Bipper/Bill makes ominous statements” that I will always lament losing (I suspect they were among the first things to go in cuts, since it elaborates on character but you can move the plot forward without it – we do have at least one surviving storyboard). Shion Takeuchi, who co-wrote this episode with Hirsch, counts few episodes to her name but simultaneously some of the best – including “Not What He Seems” and the series finale. Considering the consistent elements over each of her credits, I think we can thank her at least in part for Bill’s particularly delightful body horror moments.

What we do end up with is a delight, though. The gags are universally solid, from the angry Kermit-faced Dipper sock to possibly the best deployment of “Ave Maria” ever. The script also finds time to give quality lines to a good chunk of the cast, despite not being able to give them much to really DO. And most importantly in hindsight, this episode really nails down Bill’s personality. The influence of the original Lynch impression bloom out into a full trickster, hitting the razor’s edge balancing between entertaining and menacing that’s key to what makes the character so unpredictable and interesting. People were genuinely unsure, self included, of how he’d work into the plot. Looking back, I perhaps should have given more weight to the fact that they ultimately dressed him as an homage to actual personification of sleepless evil Reverend Harry Powell (and if you haven’t seen The Night of the Hunter, please do; it’s one of America’s finest classic films).

There are a ton of clever visual touches as well, like having Dipper close his eyes every time he enters a dream sequence (and finally cashing in on the hellish red lighting and that Bill window in the attic) and using that to play with a sense of what’s “really” happening. Was the laptop really going to shut him out? He closes his eyes just before the countdown begins. Did Bill renege on his deal? All he promised Dipper was “a hint,” and we’ll later find that his smashing the laptop does end up leading the kids to its owner. And the music! Mabel’s talent really is on par with Dipper’s mathematical and cryptographic skill. Not very many people could write and compose a pretty decent sounding musical in the span of a week, let alone a twelve year old. Hail Mabel.

The contrast between the twins that becomes the episode’s focus holds its own quite well. Both kids are good at heart and love each other (the latter point being so important that Hirsch made a point of underlining that these two LIKE spending time together in the writers’ rules for the series), and both have pretty average flaws for their age. Dipper can hold a grudge, and tends to resent those he sees as getting in his way or looking down on him.

Mabel is more impulsive and generally willing to let things go – for most of this episode her biggest fault is her thoughtlessness, with her “everything will be okay” attitude leading to her not honoring her commitment to helping Dipper or taking his feelings seriously. Unless it’s someone trying to hurt her family or friends (something that also sets Dipper off), she’d much rather get along (take “The Golf War,” where she’s angry at Pacifica but doesn’t want to cheat until Dipper talks her into it). Neither one is a saint or the devil, a point I feel the need to hammer home precisely because I observed a baffling amount of eagerness over the course of season two to assign blame to one twin or the other.

As we’ve covered in the past, fandom loves Bill Cipher. And they had a field day with this one. First of all, there was speculation after speculation of what might’ve happened if Dipper hadn’t been able to get his body back, from bringing back the copy machine clones to him becoming some kind of Bill-like creature. And more than that, it kicked off a wave of theories about Dipper turning to the dark side at some point during the series.

This mentality became so prevalent that Hirsch actually sort of rolled his eyes at it in an interview, which to me represents a fascinating intersection of text and fandom. From Hirsch’s perspective, of course nothing is ever going to come from it – he sees the big picture, from a point where the series is already written, and knows the tone of what he’s going for. It’s a story about family and learning to trust, so of course it’s not going to end with Dipper siding with Bill.

But from a fan perspective, nothing is set in stone – particularly if you’re not used to looking at big picture elements like structure, tone, and genre convention. From a pure character perspective, Dipper has elements that could work for a temporary fall: he hold grudges, he wants to be recognized (even knowing Bill is EVIL, he’s swayed for just a second when Bill says he’s impressed), and he’s recently discovered that “revenge feels great.” In the moment, and with a loooooooong time to spin theories between episodes, there’s a certain logic to it (this hidden code in Dipper and Mabel’s Guide to Mystery and Nonstop Fun did not help).

….Even if people did get a tad, shall we say, zealous about looking for clues as time went on. 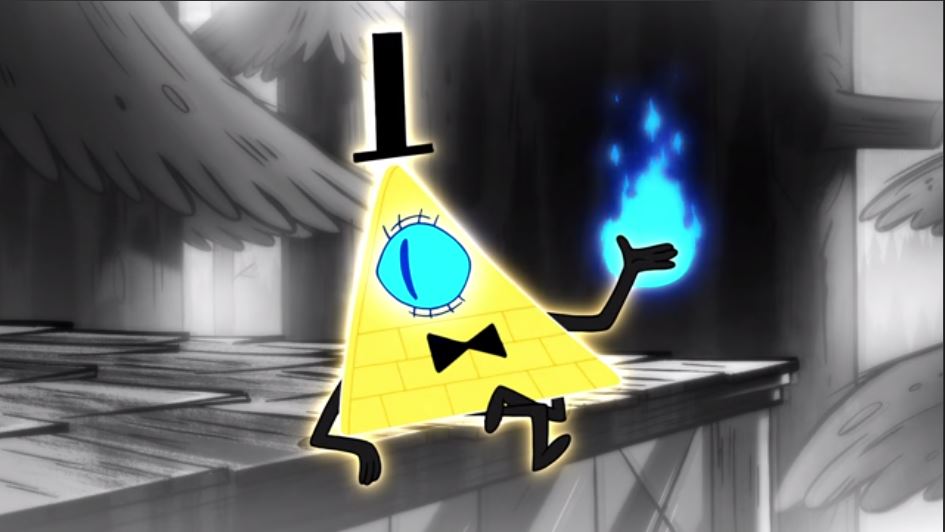 CREDITS CIPHER: We’ve All Had Some Fun Tonight, But Let’s Not Forget Who The Real “Puppet Masters” Are: Reptoids Who Have Infiltrated Our Government (key: CIPHER)

PAGE CIPHER: No Puppet Strings Can Hold Me Down, So Patiently I Watch This Town. Abnormal Soon Will Be The Norm, Enjoy The Calm Before The Storm.

This episode marks the point at which yours truly finally got their hands on the printed edition of Journal 3 (which is a really nicely put together hardcover book, on top of everything else). And it’s fortuitous timing, too. The Journal page for Bipper is “here are all the things that we couldn’t possibly get past the censors” (although, once again: peeling the skin and muscle off a human skull, fine; spin the bottle and little old lesbians, not okay).

For the record, Bipper’s hands are apparently icy cold, leading Mabel to wonder if Dipper’s body is dead while Bill is possessing it. Bill also left a note behind for Mabel to find, saying that his ultimate plan was to throw Dipper’s body off the water tower and trap him forever in the Mindscape. Let’s all remember that this entertaining triangle is also THE WORST.

Also, if you’re on the hunt for the agents, you can see a transmitter radio they left under the floorboards when Dipper is falling through the levels of the house. 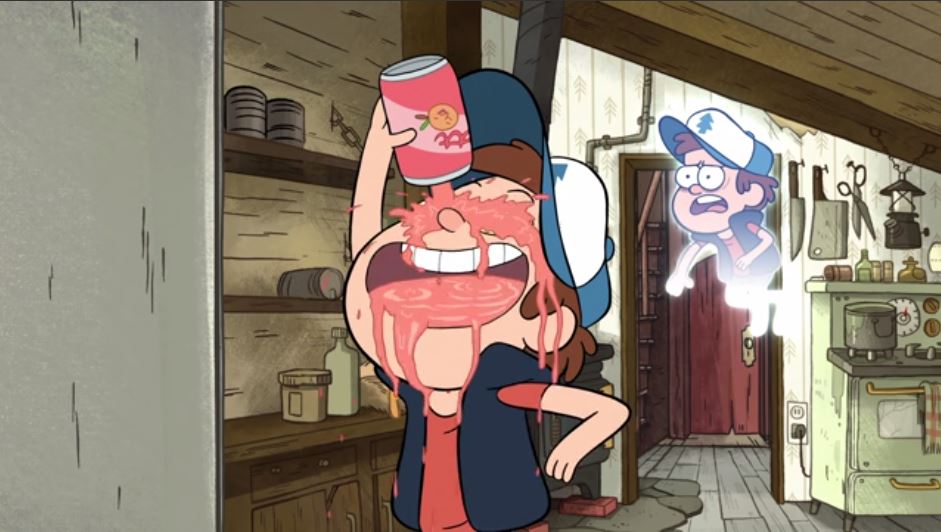 People have argued back and forth on the subject of what the laptop’s password actually IS for ages now. Even the Journal doesn’t have the answer. BUT there is a piece of anecdotal evidence I’ve always liked. Early in 2016, there was briefly a live Gravity Falls exhibit of sorts – you could go visit the Mystery Shack, and Alex Hirsch was there dressed up as Grunkle Stan. There was ALSO a copy of the laptop, and the report goes that Hirsch could be seen typing STANFORD onto the keyboard. That’s quite a stretch to call CANON on, but I do think it’s cute.

Speaking of Stanford, it is amusing that many of the Dark Dipper theories weren’t that far off when it came to predicting the AUTHOR’S relationship with Bill. Ford was successfully seduced by Bill’s flattery, his pride and search for recognition causing him to eventually shut out his only relationships and almost doom the world. Before Ford was even confirmed, this episode had Twin Theorists fired up with that “dumb siblings” line, which suggests that Bill definitely rifled around in Ford’s past…maybe literally, if that time travel theory holds any water. We’ll come to that.