During the summer of 1997, Mulan was seven year old Vrai’s very favorite movie; during the fall of 1997, it was therefore assured that a costume from the movie. What that small child quickly found, however, is that while they wanted to dress up as Ping, all that the stores were selling was the matchmaker dress. Nobody thought it worth selling the masculine clothes when obviously the girly girl no really totally a girl bit was obviously more appealing. This trend never stopped. Your author just got more bitter about it.

As for why it’s come up now, a story: I’ve been inundated lately with comments about how I should watch Voltron: Legendary Defender. It’s the Legend of Korra writing team. It’s really clever and adorable. And, most alluringly, it supposedly had a canonically non-binary character. I’m nothing if not predictable.

But the thing is, as I found out very quickly, Voltron doesn’t have a non-binary character. Perhaps you’re already putting the pieces together from the title of this article, but just in case: what the show has is a character (Pidge) who passes as male for the first few episodes, only to reveal to her friends that she is actually female about halfway through the series. At which point I walked away from anything breakable in my house.

The next point of order, of course, is “how could you possibly be upset about this, when it’s your own dumb fault for getting taken in by rumors?” And you know, there’s a certain truth to that. The recommendations were well intentioned, seeming to stem from stories that the writers had described Pidge as “they” in the writer’s room to try and preserve the twist, which they quickly backed off from once they realized that “they” is an actual pronoun actual people use; and a screenshot in the comic where Pidge is on panel and referred to as “they” in a sentence which might also be describing all the pilots. The writers, meanwhile, have been hitting the point almost comically hard in interviews about how Pidge sure is a girl, and isn’t that great. 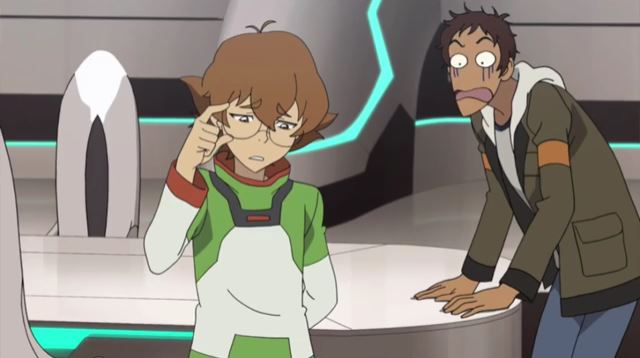 Which, fine. In truth, Pidge is written with probably the best “post reveal” fallout I’ve ever seen with this trope. No one really refers to Pidge with any pronouns at all after the conversation occurs, and no one treats her differently. This is a far cry from revealing that the trans character in Fushigi Yugi was “only” presenting as female to honor her dead sister’s memory, after which she was summarily killed off. It’s not even “we’re trying to say a feminist thing about a male-dominated field, but also you need to embrace your femaleness in very socially acceptable ways; and let’s throw in a reference to body alteration as a threatening, horrible potential outcome,” fuck you very much Persona 4.

Pidge is a fun, endearing character; heck, she’s even written in such a way where the writers could decide to explore the subject of non-binary identity in future, even if I doubt they will (not everyone figures out their identity instantly, after all, especially in such an uncharted area). So I’m not really mad at Voltron, in the end – although I rather wish they’d appreciate that queer representation is important and rare enough in all-ages media that they’d come down a little more firmly than a lukewarm “well maybe, we’ll see.” But it has made me realize how much I long for the death of the “cis woman masquerading as a man” plot altogether.

It’s one of the oldest tropes out there, made hugely popular in a number of Shakespeare’s plays and reaching back even further than that. And while implying that trans identity is a costume or a phase is becoming easier to critique and root out with the “men in dresses” trope, which is almost always used for belittling comic effect or to queer-code a villain, “women in drag” is a lot harder to pin down. Unlike its counterpart, having cis women disguise themselves as men is far more likely to be painted as a heroic motivator, and a means of trying to interject a woman into a story and demonstrate her competence alongside the male characters. It’s ostensibly a good trope, and even the Voltron writers talked about it in terms of “showing that a girl can be just as good as the guys.”

Which is a really optimistic way to come at it. But let me describe for a moment how it reads from out here, so far outside consideration that the thought never crossed anyone’s mind. First off, it implies that an AFAB (assigned female at birth) person would only ever choose to present as masculine if there were some kind of dire stakes that pushed them to this UNHEARD OF, EXTREME MEASURE. And when you tie that presentation to a quest, it naturally implies that there’s an endpoint – that the character’s presentation is a means to an end, and once they’ve achieved their goal they’ll go back to acting “normal.”

It’s not intended. It’s almost never intended. The average person doesn’t look at these tropes (including TvTropes, which loves lists a lot more than context) and think “wow, I sure can see how this came out of a fear of an Othered group and how its history might be fraught.” Unless you’re affected by it, chances are good the implications will just pass you right by.

I’m not entirely naïve. The reaction to the new Ghostbusters certainly proved that there’s a subsection of the viewing populace that apparently needs female characters snuck into their media like vegetables hidden on a spoiled child’s plate; but we’re in an age now where it’s time to call some intersectional critique into things too. 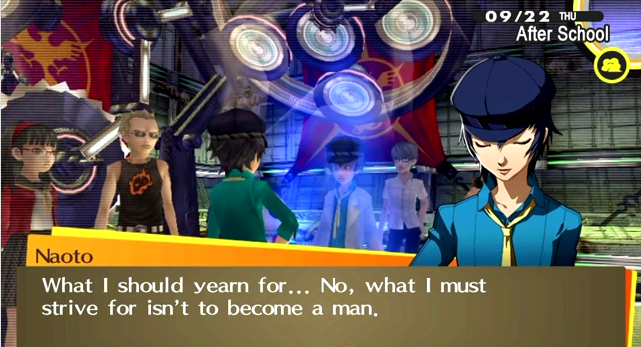 When I bring this up, it’s not really because I want to burn all my copies of Twelfth Night. I think disguises can lead to interesting stories about gender and presentation, if the writer is willing to bend outside of seeing cis identity as the default one. Monstrous Regiment remains one of my favorite novels. But not when it’s every portrayal of an AFAB person in masculine clothes. Not when you know there’s no point in hoping, even though you can’t stop yourself – those breathless recommendations came from a place of hope, not cruelty, after all. Even when the story always ends with saying, “but you’re really this,” and you go back to feeling invisible.

Bioware was pretty great when they wrote Krem, but one character is not keeping me from drowning. Krem wasn’t there when I was 18 and thought I’d found a kindred spirit in Naoto Shirogane only to wind up crying myself to sleep. Krem by himself can’t erase repetition after repetition of feeling like a plot device and not a person. I know it’s a slow process. I know because I’ve had writing rejected specifically because editors were worried about inducing confusion with singular “they” pronouns. Because people still refer to Stevonnie as “she.” Because I am still so tired.

So can we give it a rest, world? Just for a little while?