I can’t believe the Author knew about Inception way back in the 80s.

Deciding to steal the deed to the Mystery Shack but unable to get into the safe where it’s held, Gideon summons the mysterious Bill Cipher – an ancient, unpredictable triangle who can only interact with humans through their dream – to break into Stan’s mind and steal the code. Dipper, Mabel, and Soos follow Bill into Stan’s unconscious but find themselves outmatched.

This is arguably the single most important episode of season one: it introduces the show’s ultimate antagonist, is filled to the gills with foreshadowing; and cements the shift into a darker, more ominous tone with more disturbing imagery and more serious stakes. It’s also easily my personal favorite of the first half.

Bill is a marvel of a villain, straddling the difficult line faced by all trickster-types of being both funny and genuinely threatening when the moment calls for it. His first scene is a masterful conclusion to a full season of mystery, unseating the show’s to-then biggest threat in less than a minute with some nonchalant body horror and a boatload of ominous statements, all moving at such a rapid-fire pace that the comedy winds up forefronted while the horror sinks in slowly after the fact. That’s a hard sensation to pull off, particularly within the constraints of a Y7 rating, and Gravity Falls might be the most skilled at it since Courage the Cowardly Dog (the original nightmare king of the modern age of animation).

Dipper’s arc through the episode is somewhat dissatisfying – the “walking away before the crucial bit of dialogue” trope is a pretty dire cliché, and carrying it off in this case requires some pretty awkward syntax to boot. And because of how much is crammed into this episode, it also has to happen really quickly, relying more on the audience’s familiarity with the emotional beats than actually developing them in full, proving a final nail in the coffin.

And considering how often Dipper’s plots in the past have dealt with him unlearning some element of toxic masculinity, there’s something kind of sad about seeing Stan trying to bond by passing on the harmful lessons he learned from his (spoilers, seriously awful) father (I’m pretty sure it’s not supposed to break my heart a little when Dipper learns to disguise his hug as a more aggressive gesture). It also requires the firm headcanon that Stan isn’t doing this with Mabel because he thinks she’s already plenty tough and capable at standing up for herself as opposed to a gender essentialism stuff.

But, eh. You know what? There’s so much good stuff in this episode that those complaints are barely more than a footnote. The storyboarders make great use of the mindscape as an opportunity for visual metaphor ranging from obvious to buried, and the garish presence of Xyler and Craz (a pitch perfect to the gaudy colors and art style of 80s animation) never overpowers the haunting monochrome palette of Stan’s mind. And the final transition from the pure white “clean slate” of Bill’s disappearance and the gentle familiarity of the living room to the hellish red dawn of Gideon’s takeover is a truly upsetting gut punch.  There’s an almost palpable sense of excitement in the episode at finally getting to play a few big cards, with enough restraint to make a satisfying individual adventure. 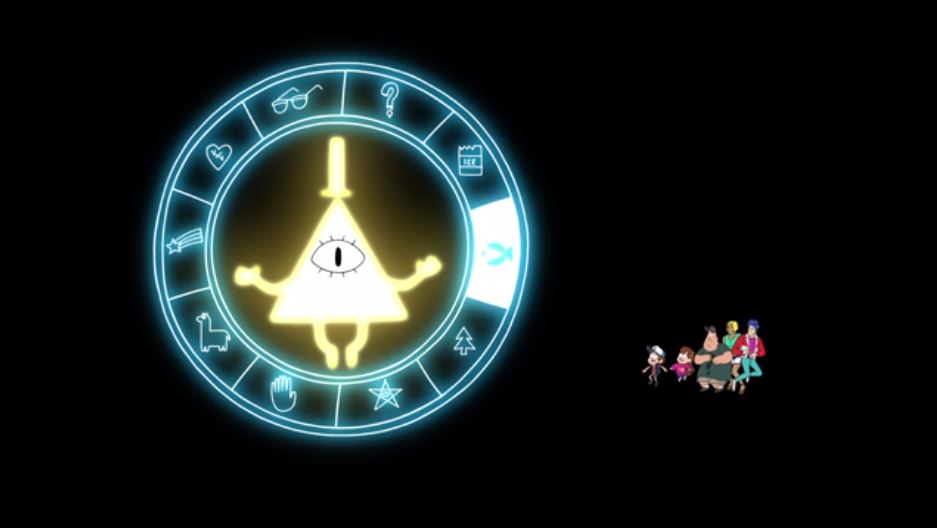 Bill Cipher. No since character or plot element generated as much speculation as that yellow triangle. From the very beginning of the show when people noticed his image flashed at the end of the opening credits, earning him the name “Mr. Triangle,” it was off to the races as to how he’d wind up relating to the world at large (a pretty telltale mark of very early art of the show, incidentally, is stuff that depicts Bill as a three-dimensional pyramid).

Originally called “Bill Black” (Hirsch had to retool the name quite a few times until the legal team at Disney was happy), the visual conceit for Bill was the Eye of Providence (from the back of the American dollar) with little stick limbs and a top hat a la Mr. Peanut. Start your Illuminati and Dorito jokes now. Get ‘em all out of your system.

As for his voice, let me tell you something you’ll never be able to unhear: the crew originally approached David Lynch to do the voice, since GF is so heavily inspired by Twin Peaks. Lynch turned them down, so the final voice is essentially Hirsch-doing-Lynch (in the fine tradition of memorable animated voices starting as off-center impressions).

There are a lot of things to talk about with behind-the-scenes and fandom stuff with Bill (particularly the famous AMA). But that’s more fun with more context, so for now I’ll leave you with this: Bill’s original introduction is one of the few scrapped storyboards that made it all the way to our eyes. 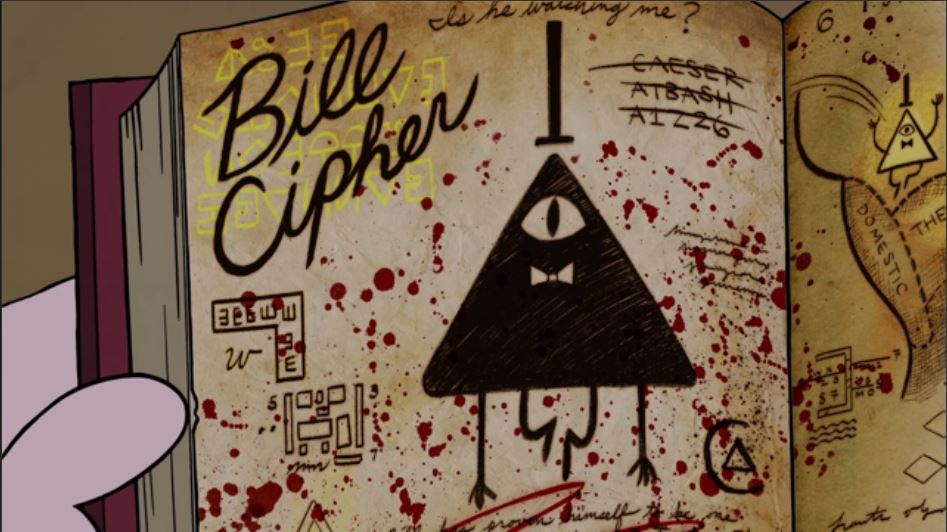 CREDITS CIPHER: TO BE CONTINUED…

(According to Hirsch’s AMA, the cipher was originally “Next Week: Xyler and Craz’s Bodexcellent Radenture.”

The introduction of Bill means that the number of ciphers ratchet up to twelve. Just for starters, all of the text in Stan’s mindscape is viewable in some manner of cipher (mostly pretty innocuous things, like the name of the Mystery Shack).

Bill’s journal page comes with a Journal-cipher that, decoded, reads: “Liar, Monster, Snappy Dresser.” There’s also quite a bit of crossed out text that can be salvaged regarding the Author’s initial impressions of Bill (“I honestly couldn’t trust him more…”). It seems that the pair were quite close before Bill revealed his deceitful nature.

Want to feel some pain? While Stan’s suffering his nightmare before Bill invades his mind, we hear him mime a pushing motion and then say “sorry.” Even from that moment, the seeds of all the important details not just of Ford’s existence but about the how the twins fell out were all in place.

It’s surprising that people missed that element by and large, given that this was the episode where people really started jumping on board the “Stan has a secret twin” theory. The big breakthrough was someone noticing that you can see Ford on the bleachers during Stan’s disastrous boxing match – or rather, you can see the top of his head and the fact that it’s an exact match to Stan’s, in a show that’s not known for repetitive background character designs. That was enough to lend credence to the disparate pieces of the wax dummy, the extra pair of glasses, and the winter cabin scene that people had been speculating about up to that point.

In addition, Hirsch himself pointed out (in an interview given after Ford’s reveal) that the broken swingset was also meant as emotional foreshadowing, symbolizing the fractured bond between the twins.

One of the great remaining oddities of the show is rewatching Bill’s still-forming characterization in this first appearance. I’m still not sure what on Earth he expected to gain from Gideon – the events of “Sock Opera” seem to suggest he wanted a body, and Gideon’s possession of a journal would’ve theoretically made it easier for Bill to affect his plans (as well as Gideon’s popularity, which would theoretically give Bill a lot of ready-made minions with minimal effort).

But it’s also not clear why Gideon can break off the deal and leave Bill powerless in comparison to Dipper’s later struggles (I suppose at that point Bill did technically give a “hint” by smashing the laptop and revealing the “McGucket Labs” tag) – I suppose since Gideon had more concrete terms for his deal, and things were broken off before Bill could even technically deliver. It’s one of those things that makes a loose amount of sense on the surface, with a few incongruent details that can likely be chalked up to the writers still working out exactly how Bill operates and uses his powers.

And while we’re at it, “at what point did Bill know which Stan is which.” He knows Gideon before he meets him, implying that he can watch the mortal realm from where he was trapped in the mindscape – but when Gideon says “Stanford Pines,” the image that flashes across Bill’s face is of the actual Ford. It seems possible that a big reason Bill agreed to help out was to investigate whether Ford had managed to escape the portal without Bill noticing.

And how about that Stan foreshadowing, hmm? Stan’s portrait with the crossed-out eyes is a precursor to that haunting shot of him staring blank-eyed up at the closing portal in “Weirdmaggeddon,” and while it’s never quite clear how he learned to be so conscious of his own mind, it’s a great way to plant for the payoff of Bill’s demise (well, sort of demise; axolotl and all).