The Consulting Analyst – The Letter From Edmond

Episode Specifics: Maximillien decides to get Valentine out of the Villefort house (summarizing that “she’s lonely/in need of support” and not “she could get so very murdered the second we turn our backs,” but at least the action is right), only to be told that if he attempts it Villefort will have him arrested. Meanwhile, the heads of the three major families all receive an invitation to a funeral sent by “Edmond Dantes.” Albert follows them to the location, and overhears them talking about a terrible crime perpetrated against this mysterious man. When he arrives back home, he learns that Maximillien, Franz, and Renaud have gone without him to rescue Valentine, and rushes to help them just as the would-be heroes find their escape route blocked by an armed and angry Villefort.

In the vein of giving the ensemble cast more agency rather than “letting the Count do all the cool things because he’s the hero dammit,” Valentine’s plot here is a remixing of what happens to her in the book: there, it’s Noirtier (her grandfather) who takes a few sips of lemonade and almost dies, for which she is blamed; and later the Count, having had a change of heart, puts her into a deathlike coma to spirit her out of the house and basically give her as a present to Maximillien. It is….gross. it’s really gross, y’all. While Max might miss the mark here about what Valentine wants or why she needs his help, at least he doesn’t act with the intention that he’ll get to keep her as a reward for doing something good.

This post has a lot of “book remix” elements – some that are skillful (the entire funeral scene, while a touch heavy-handed, is breathtaking in execution), some that are a little fumbled (see the next section), but one that I remain on the fence about is the matter of Louis Dantes. Naturally, in the book Edmond comes asking about his father as soon as he escapes from prison, hoping he’ll have some kind of life to go back to and falling into vengeful despair when he hears of what happened. But the “priest making inquiries” bit had to be moved up for the conceit of the episode to work, and for Boville to have something to investigate his murder.

Which works fine in its own context and as far as plotting – but it also leaves two unsettling new possibilities in regards to the Count’s motives: either he buried that thread in the past and brought it back up as a false lead to bait the spy he knew was following him (someone has to be paying the rent on that building, after all, to keep it as it was all those years ago); or, the possession by Gankutsuou took the Count far afield in the wake of his escape in a way that simply wasn’t true for book Edmond, meaning that this is the first time he’s thought of his own life.

I’m inclined to believe the former, as he visits the man’s grave prior to beginning this feint (perhaps in apology) – but it does add a certain coldness to his character motivations with that willingness to use his personal tragedies to draw out his prey rather than merely skillfully hiding them behind his persona as the Count.

Character Spotlight: In adapting the novel from the latter half back (not to mention cutting out 97% of the Napoleon business) there were bound to be a few loose ends that never quite got tied up. Chief among them is the entire existence of Caderousse, who was technically part of the plot surrounding Edmond’s wrongful imprisonment but never really went onto do much of anything important. He was Edmond’s father’s landlord, and was witness to Danglars and Fernand hatching their plot against Edmond, though they liquored him up to keep him from saying anything about it.

Later, Caderousse is Edmond’s go-to for exposition when he gets out of prison, explaining what happened to Villefort, Danglars, and “de Morcerf” after they profited from Edmond’s imprisonment. That’s where the “priest making inquiries” bit of the episode comes from – Edmond was the damned master of disguise for a while there, and his go-to was GOSH, I HAVE THIS SHINY ENORMOUS DIAMOND THAT POOR EDMOND TOLD ME TO ENTRUST TO HIS FRIENDS. WHY, WHEREVER COULD THEY BE. Even though it’s a blatant excuse for longwinded exposition, it’s also one of the book’s best examples of just getting to enjoy Edmond being a really justified, skillful troll.

Of course, since the anime starts out post-rise to fame, Caderousse’s main purpose kind of isn’t. The main thrust of his crime, the reason we’re supposed to root for his downfall, is that he’s someone who allows evil through inaction – and further, profits on it. Quite a relevant bone to pick in the novel, when there’s so much surrounding themes of Revolution and political alliances (and, as we’ll discuss further down, the Romantic hero as one of unshakable ideals versus the changeable loyalties of the novel). He goes on to blackmail Andrea, which eventually gets him stabbed for his greed.

It’s not that those themes aren’t relevant in the anime, and Caderousse does still make appearances – but this is one of the few cases where starting with the back half of his arc doesn’t work out quite so neatly, and he ends up being mostly an addendum for mood and foreshadowing purposes.

Courtly Intrigue Update: Further sightings of the Moon Gang this week, if you weren’t certain that they’re still an active part of the Count’s plans (presumably they were hauling the body). Villefort’s murdered assassin, Boville, is in fact a character in the novel – he’s the inspector of the prisons in the Chateau D’lf and later works for the police in Paris, though as with a lot of info this episode it’s remixed as a way of getting backstory across. We have confirmation of the plot against Edmond Dantes, most notably; but Andrea is also making inroads with Danglars by dangling financial control under his nose, and Mme. Villefort is getting a lot bolder with offing everyone standing in the way of her demon child’s inheritance (you cannot tell me the vase-knocking scene isn’t an homage to The Omen). 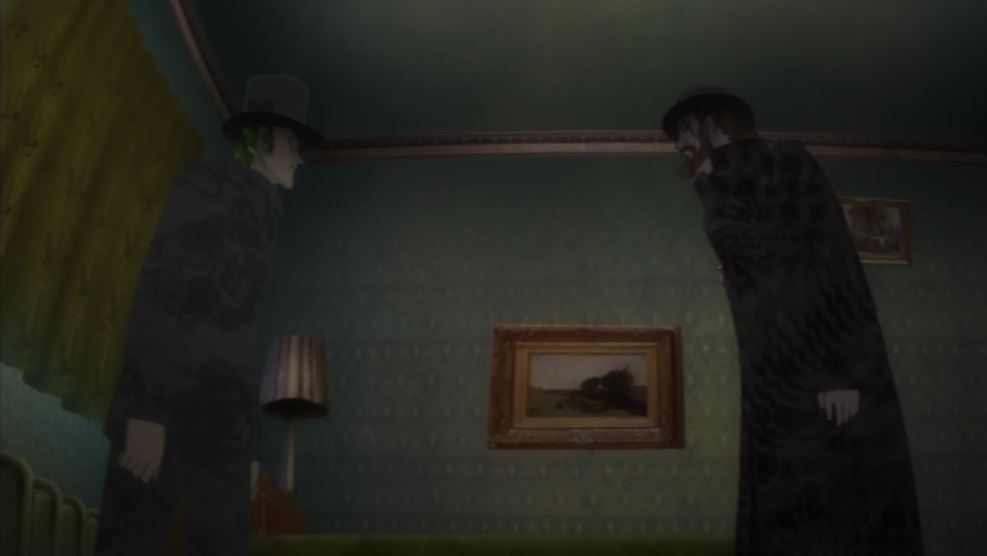 Adaptation Corner: Since this episode is all about visiting backstory town, let’s take a break to get a better idea of the literary period in which Dumas was writing. Since the novel was published in 1845, it came right in the most violent throes of Romanticism; in fact, Dumas and Victor Hugo are pretty much the poster children for the movement. To pare it down to the broadest of strokes, Romanticism could be summed up as 50 Years of Feels.

This all started with a German movement known as Sturm und Drang (usually translated “storm and stress”), which became wildly popular with Wagner’s Ring Cycle and its ilk. Big sounds, big emotions, the idea of nature as this tempestuous, awe-inspiring thing. While the Enlightenment of the 18th century was all about rationalism and the purely observable (although for all that, they sure did believe pretty hard in divine bolts of inspiration from God), Romanticism was about the importance of interior life. It isn’t enough merely to act – one has to examine their internal logic about it (if you’re following the other Friday series, look no further than the two central lovers for your Romantic and your Enlightenment figures).

While the Germans might’ve kickstarted the movement, the French wound up putting their indelible mark on it by tying art up with revolution – the notion of heroes standing against all odds for ideals, passionate and just against a world against them, is heavily baked into a lot of those grand Romantic novels. Not least Monte Cristo, with its heavy inclusion of Royalist vs. Bonapartist politics and powerful portrait of a wronged man seeking justice (it’s also responsible for some of the novel’s major flaws – namely that thing where everyone’s importance and general characterization getting swept up in the narrative tidal wave of whatever’s going on with Edmond).

In regards to Gankutsuou specifically, there are still strong elements of the Romantic spirit threaded throughout the story, even with all the space trappings. Gankutsuou is about as far from sci-fi as Star Wars, at the end of the day – we’re looking at pure space fantasy, the trappings of the strange and fantastical being used to repackage very old stories (by contrast, proper sci-fi is interested in looking forward sociologically or technologically, specifically projecting some version of a theoretically plausible future or remarking on the current society in which it’s made).

And that space fantasy goes hand in hand with a Romantic sense of pacing. For all the intricate conspiracies and power plays, this is a story powered by emotional logic. Who the fuck cares how Edmond built a golden underground city, or how exactly space-Paris works sociologically speaking, or why furniture starts flying around when the Count reveals himself at the end of this episode; narrative details are superseded by character truths at every turn, with intent and motive of the individual given infinitely more credence over the machinations of worldbuilding – which is, yes, why the climax happens the way that it does. But that’s a long way off yet. 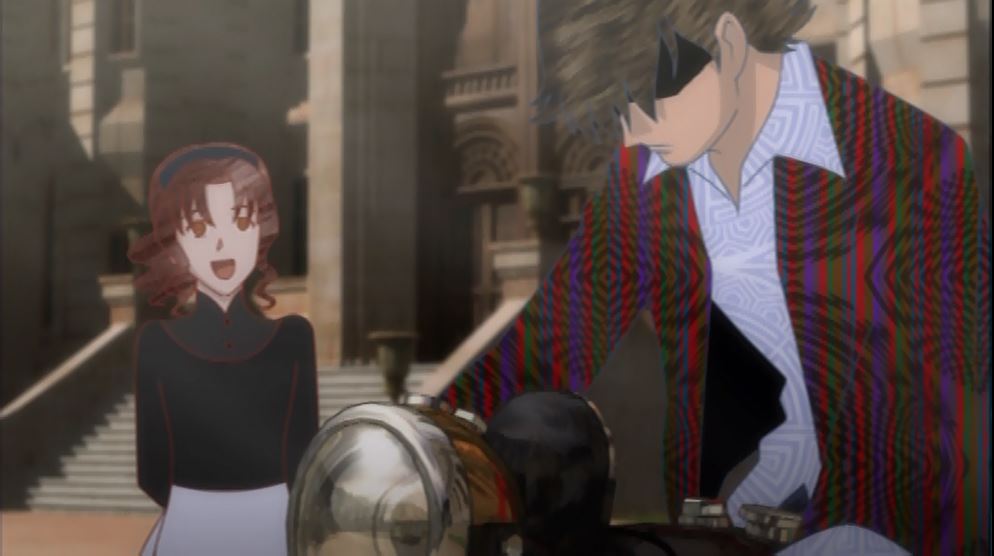 Themes: It was very, very subtly included, so you may have missed the recurrent motif this episode about “family matters.” The concept of found versus blood family is one of the show’s primary underpinnings, with the latter particularly pumped up in adaptation. But that’s a dime a dozen in anime, what with all those chronically dead parents.

What’s even more interesting is that each relationship has a mirror, preventing the discussion from falling purely into “X relationship is bad, and Y is good.” Albert’s group of friends is matched by the Count’s servants (actually, there might be an interesting analogue to be made there as to whether Franz aligns with Haydee or Bertuccio…); Franz, Albert, and Eugenie are a foil of the trio from Marseilles; Valentine has a literally toxic adoptive family but is saved by becoming part of the Morrel family, and so on.

If the momentum of the plot is informed by Western Romanticism, then this twist in theme is of a decidedly Eastern philosophy: that a concept is neutral, inherently, and it’s people who bring either a positive or negative connotation to it (Miyazaki made his bones on the related idea that the best villains are understandably if oppositionally motivated antagonists). That’s a pretty far cry from the Hand of Righteous Justice going on in the novel. Oh, there are some awful, irredeemable assholes in Gankutsuou, but by and large everyone has some manner of understandable motive or at least scrap of a redeeming feature. The question becomes what they do when forced to confront some manner of horrific truth.