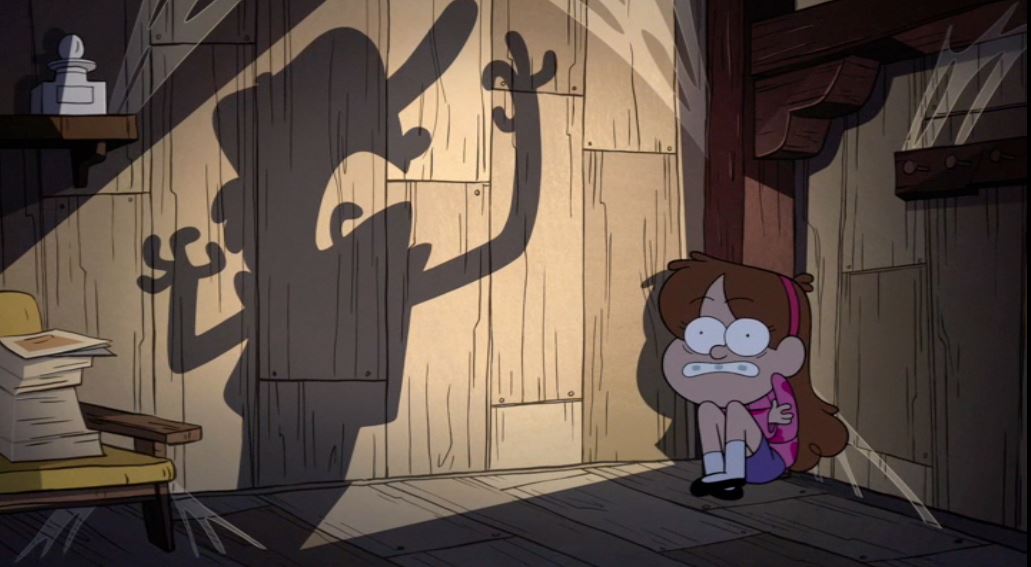 Sorry about the delay, readers. I have excuses, but likely none sufficient.

Frustrated that Mabel keeps having her friends over for sleepovers, Dipper decides he wants his own room – conveniently, Soos has just uncovered a secret room in the Shack that would be perfect. The fight to win Stan’s favor (and thus the key) is on, and accidentally swapping bodies thanks to the room’s mysterious shag carpet only offers new opportunities for sabotage.

The Mystery Shack has always had a sense of various “spaces,” from the public-facing gift shop to Stan’s secret space behind the vending machine to the communal warmth of the TV room; each has a distinct feeling colored by its occupants, and it was only a matter of time before the subject came to the fore – and the boarders take full advantage of the opportunity to play with what we’ve come to take for granted. The twins’ room, for example, has always featured a pretty neutral design with the occasional splash of color to mark each twin’s interest – posters for Mabel, scattered pages of notes for Dipper, that sort of thing (and shoutout to the character animations as well, for that matter – there are a ton of neat little touches during the “switch” portions of the episode, like giving Dipper-Mabel messier hair and eye bags).

Here, they start with the golf course as a way of completely dissolving any sense of barrier and then literally break that once the sleepover starts. Those scenes are COVERED in pink and almost universally framed as if Mabel’s half takes up the entirety of the room. It’s a great visual representation of how Dipper begins to feel crowded out, and probably the best manipulation of audience mood since that creepy red window in the attic.

The secret room itself is the first sense of the mystical invading the Shack since the reveal of the secret stairway in episode one, planting more than a little doubt in regards to Stan’s firm commitment to fake mysteries (a practicality Dipper discovered back in “Boss Mabel”). It’s not just that real oddities don’t sell – there’s a constant sense of things being buried here, as if being hidden from someone. The house itself is layered and protected from something in the same way Journal 3 was hidden in that tree. Without a single word on the subject, there’s an uneasy sense of looming, watchful eyes necessitating secrecy.

Tying it all together is that continual theme of being “left behind,” which itself offers layered meanings in regard to the episode’s plot. All the jokes about puberty aside (and the entire “birds and the bees” talk is good, good stuff), the real stake is the emotional honesty between Dipper and Mabel. This is a world where adults often appear as some variation of fools or liars (whether that appearance is always true will be a subject of discussion down the line), and as the mysteries Dipper so want to solve begin to become more apparent, that edict about “trusting no one” begins to threaten the bedrock around which the rest of the show turns. 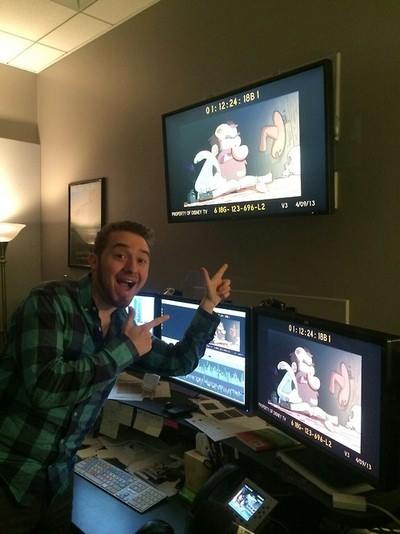 Who is the Author, anyway? Everyone and their dog had a theory or two, and the more secrets the Mystery Shack revealed the more people started to wonder if it might not actually be Stan. After all, he’s got that secret room behind the vending machine, and a downright suspicious track record for turning the other way when there’s something supernatural on display. And now, on top of that, there are strange experiments turning up that always seem to wind up in Stan’s hands.

Hirsch seemed to take no small amount of pleasure in fanning the flames of this speculation, too. During the long, long break between seasons, there were a number of photos “leaked” from behind the scenes that seemed to offer answers. One camp in particular, convinced that the apparent master inventor Old Man McGucket was somehow involved if not the Author himself, were especially pleased about the photo I’ve included (taken after Hirsch pulled back the curtain on the hoax). Trust No One, indeed. 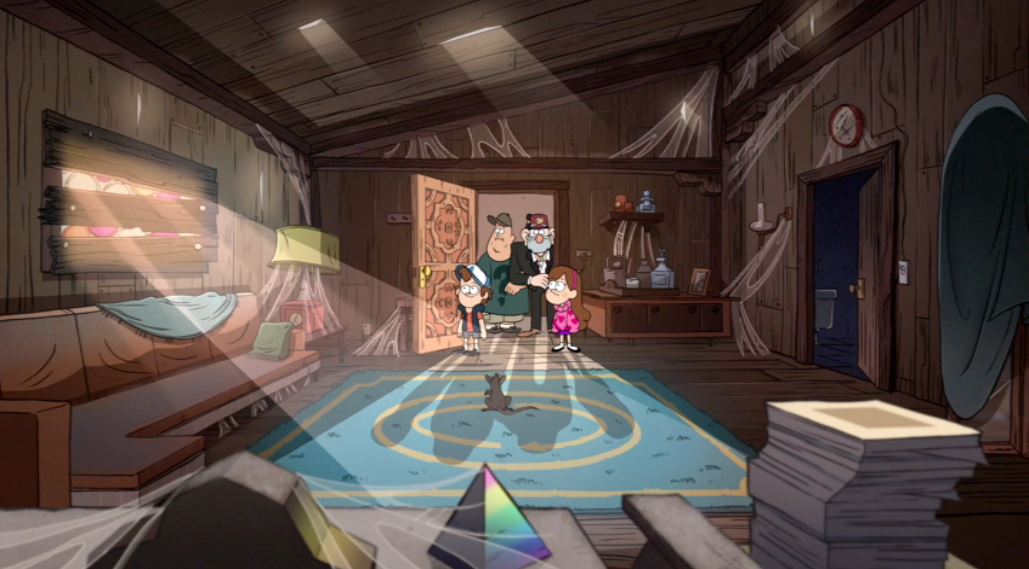 CREDITS CIPHER: But who stole the capers?

There’s a bonus cipher this week as well, since we’re given a chance to have a long look at the pages of a book – no way was the crew going to pass up that chance to slip a secret extra joke in. This one actually swaps back to the Caesar cipher, and reads “Puberty is the Greatest Mystery of All. Also: Go Outside and Make Friends.”

And an extra note for you first time viewers: pay special attention to the items in that secret room. There’re more than a few clues about the past in there. 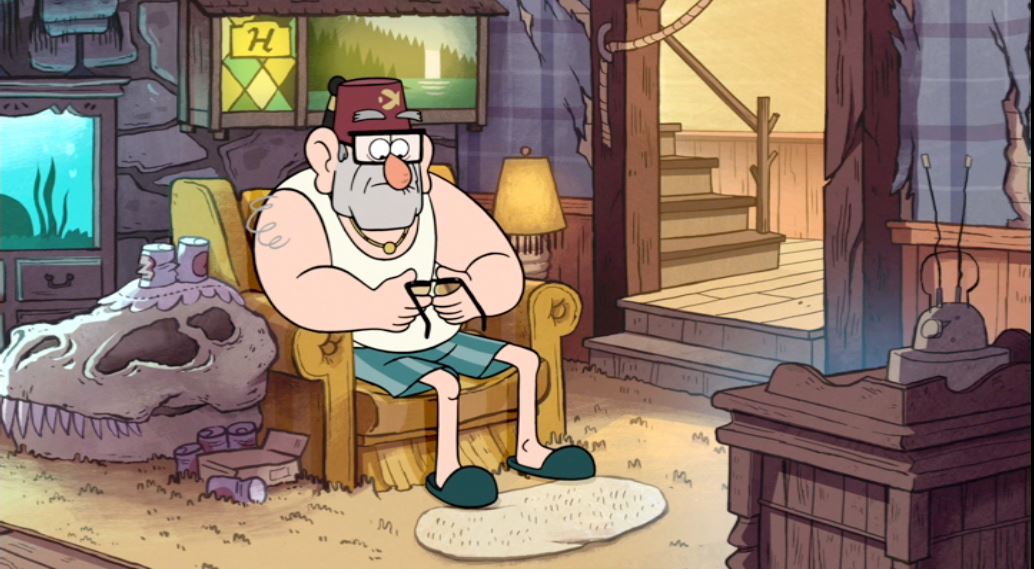 Another day, another episode where Stan’s mere presence implies deep, deep feelings of sadness. The spare room, of course, is awash with hints about Ford’s existence – you can see the table with the prism in one of the first images we’re ever given of the offer (not to mention the teaser images that were put out about season two); the calendar on the wall seems to mark the day of the fateful portal testing, after which Ford was left alone to descend into paranoia; and there are his glasses, which was one of the first big bits of evidence around which the “secret twin” theory began to form.

But unexpected and even more heartrending is the hint about Stan’s lingering resentment over the favoritism Ford received. Stan definitely knew that room was there – how could he not, when it was where he spent his first night after Ford fell into the portal? – but he walled it off at some point, with all of Ford’s stuff preserved inside. Years later Soos find it, and the kids are instantly impressed – he doesn’t even have to be there, and still Ford is upstaging Stan. So even though it’s been thirty years, that line of “sure, if you like things that are terrible” still slips out. Those old wounds are hard to close, even though Stan’s dedicated most of his life to trying to get his brother back. And let’s not even start with those lingering daddy issues lurking under “You had me at ‘shut up, old man’” (something that Stan himself never actually got the chance to say and probably wishes he had, given how much of his life was spent trying to prove something to his father rather than trying to patch things up with Ford).

Hold on, there’s something in my eye.