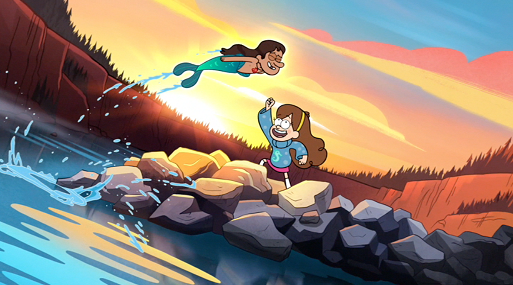 The summer heat means that most of the town is camping out at the pool. Dipper scores a job as a lifeguard in order to spend more time with Wendy, Mabel develops a crush on a mysterious boy who apparently never leaves the pool, and Stan wars with Gideon over the perfect deck chair.

If “Bottomless Pit!” got to peek a little bit into the thematic heart of what makes Gravity Falls tick, then this episode is firing on all cylinders in making the best character jokes. Everyone gets a good turn this episode, from the A plot all the way down to the bit gags (though join me, won’t you, in letting out an exhausted death rattle at the beyond decrepit “ew gross, Dipper kissed a BOY” portion).

Another guest writer came in for this one, and in contrast to some of the other one time contributors (whose work was largely in other, fairly recent animated shows), this is someone with a developed resume all the way back into the 90s. Nancy Cohen worked quite a bit on Sabrina the Teenage Witch, among other things. And I suspect that’s part of what makes Mermando so memorable as a crush. It’s not down to the writer’s gender (though having one’s own experiences to draw from can help with a feeling of authenticity), but because Cohen goes hard on getting us to invest in a genuine connection in a way that the rest of the writing team might not.

One of the show’s great strengths overall is that it values family, found and blood, where other series might place a value on romance as more “special” than platonic relationships. So, by and large the show’s brief forays into relationships tend to be a bit awkward, and at their best when they’re ultimately refuted or played for comedy. There are definitely plenty of jokes around Mermando and Mabel’s awkwardness in trying to bond with him (the scrapbook, oh the scrapbook), helped along by the just-cheesy-enough Antonio Banderas impression Matt Chapman is doing; but there’s a real sincerity on display too, with flashes of great friendship in little moments like the two combing each other’s hair or actually talking outside of Mabel’s desire to finally get her first kiss.

This is easily the high point of the recurring “Mabel has a crush” plot beat, though great things will spring up around that inciting incident down the line (one word: puppets); still, it’s not a bad one to have as top of the heap on that front.

Speaking of mermaids! It’s as good a time as any (since this was a relative lull for the fandom in terms of both scheduling woes and new conspiracy fodder) to take yet another diversion into alternate universes: in this case, what you might loosely term “Monster Falls.” The weirdness around Gravity Falls is often depicted as one of those things that just kind of sidles its way into the lives of the townsfolk, affecting them without them necessarily noticing. So, why not explore the potential of “what if something affected the cast outside as well as inside?”

Which tended to translate to a fairly stable set of headcanons of what mythical creature the main cast at least “should” be – a satyr or “deertaur” for shy, nervous Dipper; a mermaid for Mabel (based largely, I think, on the image manip potential from this episode); a gargoyle for gruff, protective Stan, and a werewolf for Wendy (which I have to imagine is predominantly down to the hair, at least on first thought). Ideas for the townsfolk had a higher degree of variance, and if you were feeling really bold you might turn some of Gravity Falls’ supernatural entities into humanoids just to watch the fallout. 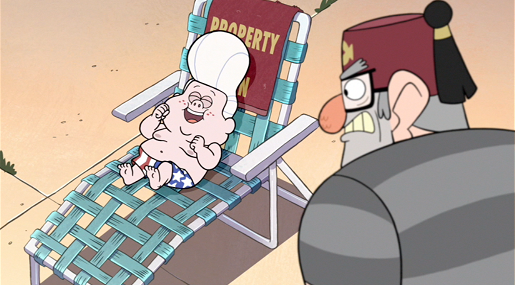 Now, the following might be apocryphal – the GF wiki doesn’t have a citation, and I haven’t been able to dig up any altered TV versions to confirm my vague memories – but supposedly one of Stan’s best lines this episode (“Yes, burn the child!”) was censored for the TV airings of this episode. This isn’t the first case of this happening, either (the “I HAVE FISTS FOR NIPPLES” joke in “Dipper vs. Manliness” was also snipped from TV airings but remains intact on the home version). Hirsch stated that the show’s move to Disney XD didn’t correlate to the second season’s darker tone, but you can definitely see the show chafing at the borders of its regular Disney channel airings. By “Dreamscaperers,” they’d just thrown caution to the wind and said WELL, THIS IS WHERE WE ARE NOW.

Also – and this is a burning question that no one, to my knowledge, has ever answered – what did that kid in solitary even do? 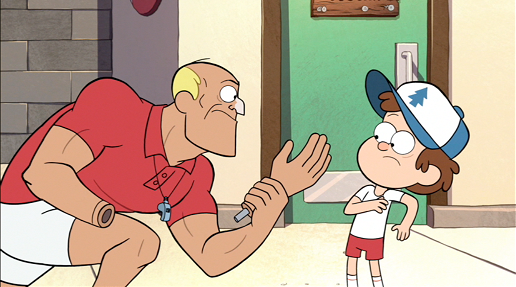 It’s still something of a surprise to me that Mermando never really came back as a player in the plot – certainly there was a heavy expectation that he would, given that he was the most memorably designed and endearing of Mabel’s crushes. Given the letter in a bottle scene that ends the episode, I would guess that this was more down to a lack of time once the show was cemented as being two seasons rather than three.

This also marks yet another time that Dipper’s given up (what he perceived as) a chance with Wendy in order to support Mabel – small props on that front, by the way, as the camera spends a full reaction shot on Wendy deliberately ignoring Dipper’s muttered comments. OF COURSE SHE KNEW, YOU POOR AWKWARD CHILD. That aside, this is also the one case where Mabel’s own goals are also at the expense of her own wants, since she knows helping Mermando probably means never seeing him again. It’s a nice point of growth for her and also adds an interesting undercurrent when Bill later includes it in his “Sock Opera” pitch, shifting the tone from “why is it always Mabel who gets what she wants, and when is it my turn,” to “why can’t I have this thing I want, even if it means others wind up miserable” (it’s not just that Dipper is kind, but that he has a strong moral compass in his compassion for others, which will eventually set him apart from Ford).