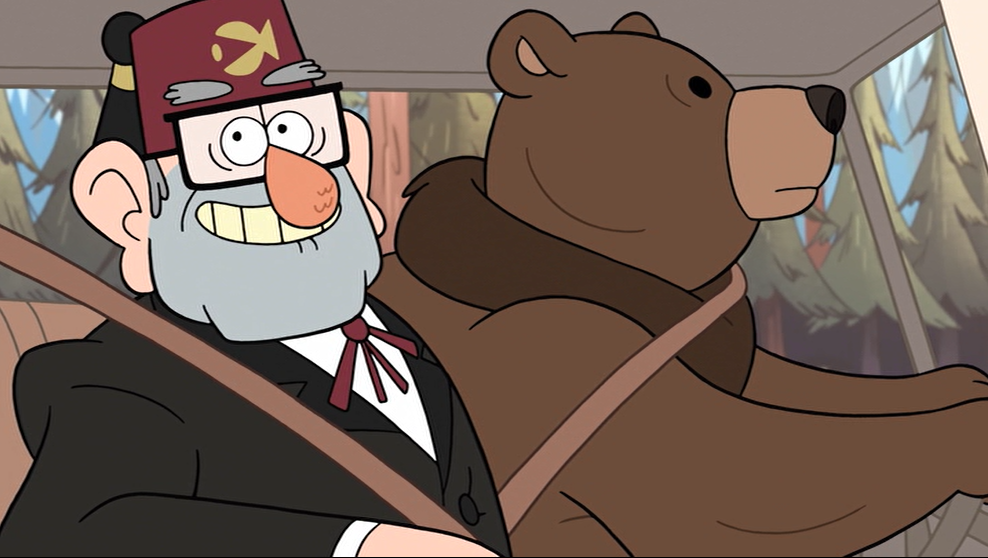 Okay, but what ELSE has Stan been throwing in there?

While throwing incriminating evidence and other trash down a nearby bottomless pit, the twins, Stan, and Soos fall in and pass the time by telling stories: Dipper describes a voice-changing serum, Soos has a run in with a vengeful pinball machine, and Mabel gives Stan a truth-inducing pair of dentures.

Returning to the influence of Matt Groening on this show, here we have a good old fashioned anthology episode in the style of “Treehouse of Horror” or “Anthology of Interest.” It’s a great means of finding a home for jokes and neat ideas that never quite gelled into full 22 minute episodes as well as shaking up the format for an audience (especially with a show for younger viewers, it’s always nice to see experimentation with storytelling styles).

Dipper’s story, “Voice Over,” is probably the weakest of the bunch. While it gives guest voice A. Smith Harrison (veteran commercial voice and friend of Justin Roiland) a chance to goof around and the animators free reign to play with the dichotomy between sound and visuals, there’s not really much to it beyond that – if anything, the fact that Dipper’s voice changing is a plot point here but completely missing elsewhere in a show that so heavily favors continuity is a weak point. It’s perfectly entertaining, but the other two stories have stronger layered writing and more character substance.

Soos’ story (shorthanded thus for the sake of staving off carpal tunnel another year) is admittedly far stronger in hindsight, serving up an immense amount of thematic foreshadowing for the most pivotal moment of the series. On its own, it’s only moderately above “Voice Over” as far as taking on the “vengeful object curses the person who misuses it” plot. The fact that it has tongue firmly in cheek helps, as do the creative visual moments using the scale of our heroes as they move around the inner mechanisms of the machine. And the final minutes, pivoting the narrative from a story about “don’t cheat” into one of loyalty to friends at the expense of personal gain (which in this case wasn’t earned anyway) ends things on a sweet note.

“Truth Ache” is the standout winner any way you look at it. “There will be times when you need to lie” is a truth of life that children’s media stays far away from, and that willingness to play into more uncomfortable or bittersweet aspects of life is one of the show’s great strengths. It has the best jokes of the episode, with Stan’s moment of existential crisis still standing out as one of the most memorable moments in the show. A bear drives a car. And it works wonderfully as a companion to “Boss Mabel,” one again highlighting Mabel and Stan’s relationship but in this case how different they are and how that provokes growth, as well as being a subtle but fascinating glimpse into Stan as a character (above all, how much he hides in the name of protecting the kids, which can be a surprise for first time viewers given his usual “let it all hang out” crusty persona). It’s the nugget that turns this episode from just solid into a must-watch. As long as Gravity Falls has existed, there have been theories on who would be biting the proverbial bullet and when (ranging, as you might expect, from the general tear-inducing farewells to Depravity Falls-tinted nightmare theories). Hirsch himself fanned the flames when he showed up on the Nerdist Writer’s Panel, giving a talk that included a lot of grim forecasts about the dark inevitability of deaths in season 2 (which, without spoiling anything, does have a markedly darker tone than this first season). And one of the biggest wagers (the other two being Stan and Old Man McGucket) was on Soos.

Which, looking at this episode, isn’t such a farfetched guess. Hirsch had a tendency of bringing up Soos’ unshakable loyalty to the Pines family and hinting at just how deep that loyalty might go. And then we have episodes like this, where Soos’ story ends with declaring that his mission in life is to protect Dipper and Mabel. Left and right, those death flags. Though at least Soos has it better than Stan, who has a truly alarming number of effigies of himself destroyed in the course of these adventures.

We’ve changed ciphers again! This one is actually a little bit easier to grasp than the previous two, and there’s a chance you might even have come across it as a brain teaser in school. The A1Z26 cipher is…well, it’s what it looks like. Each letter of the alphabet is assigned a number from 1 to 26, and you just replace the number code with the corresponding letters.

Of course, this is just a warm up for when decoding the credits and other hidden messages will require entire charts and hidden key phrases in addition to the basic scrambling, so if anything it’s a kind reprieve before the really punishing work starts. While not much of this episode winds up coming back in terms of material continuity, an astonishing number of factors serve as thematic foreshadowing for “Not What He Seems” (with a few lesser nods to “A Tale of Two Stans” – primarily in the form of Footbot, Stan’s apparently very long held dream). Soos’ story is basically a precursor to the portal dilemma, though it arguably has lower stakes since we know what Soos gets out of pressing the button and only had a vague hint of why Stan rebuilt the portal. At the same time, the theme of personal glory versus selfless sacrifice is also at the heart of what makes Ford and Stan respectively tick, and why Stan is ultimately the hero who’s able to defeat Bill.

We might also be able to classify the titular bottomless pit as the show’s first foray into alternate dimensions. While the gang is ostensibly dumped back out where they started, the only assurance of that we have is that the immediate setting appears the same as the one they left (after all, Stan’s never seen anything else that he’s thrown in there come back out). For all we know, this is a universe where Gravity Falls is basically the same but something is wildly different somewhere else (or something only very small and stupid is different). Ford probably wrote about the pit in one of the journals, but who knows if he tested it. Maybe it’s two way, maybe it’s randomized. All I’m saying is, for the fandom’s love of strange alternate universes, I haven’t seen nearly enough wild theories about that hole.