It’s possible that a person might wake up and realize, “well shit, I just spent 12 straight hours playing Stardew Valley; guess I’d better write about it.” Possibly it is less extreme for those without obsessive disorders, but I get the feeling I’m not entirely alone in this whole unexpected time loss thing. It lures you in with the hypnotic cycle of daily tasks that’s become a staple of so many mobile games, and when you look up again you realize 50 hours have passed and you’re not sure if you’re angrier at the game or at life for taking you away from the game.

The game has a simple premise: you are a young person of indeterminate gender and appearance, and on his deathbed your grandfather gives you a letter; he tells you to open it when you’re tired of life, and then pans offscreen to presumably die quietly. Inside that letter, as the protagonist finds out sometime later, is the deed to a farm in Stardew Valley. You pack up your meager possessions, take the bus out, and are left with the task of turning the total wrecked, overgrown farmland into something profitable.

This is a game that’s very, very good at what it does. It throws a terrifying number of tasks at you all at once – go to the store for seeds! Here’s a fishing rod! You should probably make friends with the 28 people who live here and there’s a spooky cave uptothenorthokaybye! – and then leaves the player in a flustered panic to set their own pace. From there the game proceeds on a calendar schedule, with a year consisting of four seasonal months. And chances are good you’ll spend the first season Doing it Wrong, blowing all your money on low-yield seeds or realizing you stayed out too late and collapsing on the road on your mad sprint home (automatically getting a ding to your savings as someone drags your unconscious carcass to the doctor).

It’s also clear nearly as quickly that doing it wrong is okay. There are a lot of ways to earn money and multiple skills to upgrade, so you can get into a solid rhythm with planting or mining and then try out one of the other tasks that seemed so imposing when things start seeming a bit stale. The basics are all pretty intuitive, though fiddlier details like trying to track down a specific townsperson or where to get a certain fish might require a guide. And speaking of fishing: it’s the worst. I would do a hundred missions in the Mako if it meant never having to suffer through Stardew’s fishing system again. They both have all the joy of trying to operate a greased up joystick while it’s being shoved up your nose. 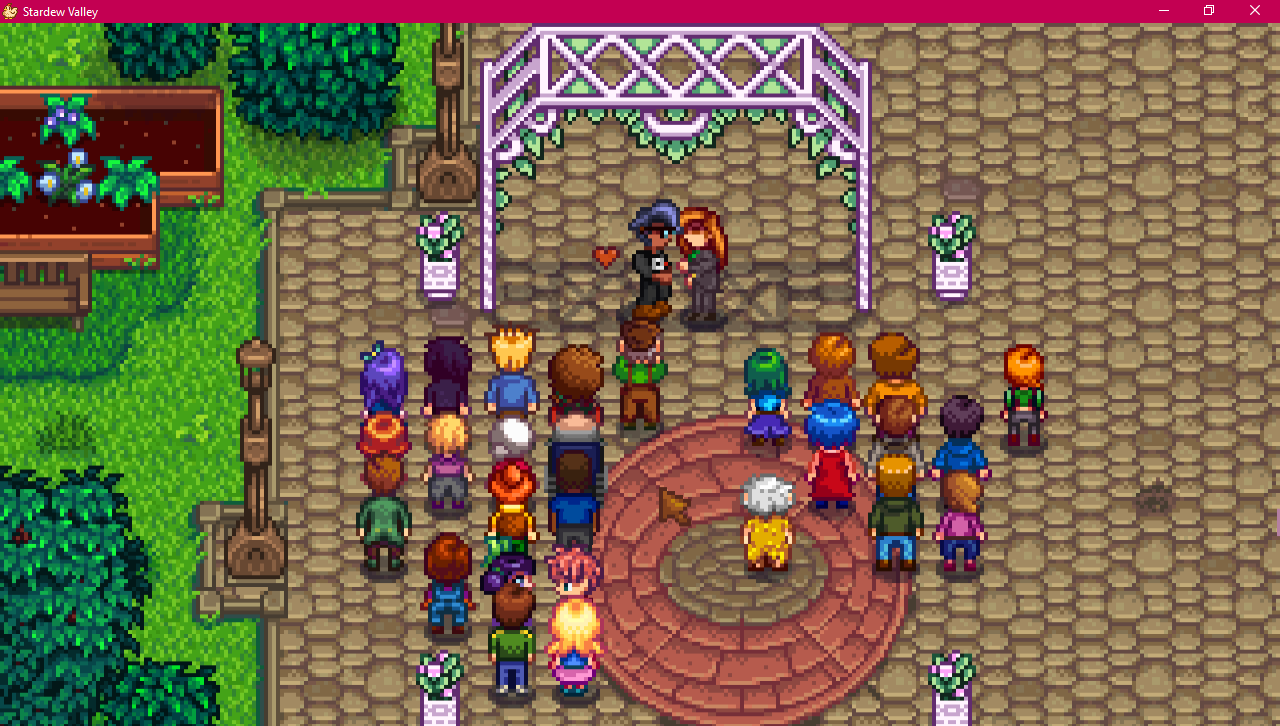 It helps that the looks gorgeous. The graphics are somewhere between Undertale and Scott Pilgrim, with simple but memorably designed sprites and an absolutely gorgeous color palette that suits the low-poly aesthetic. We have now reached the limit of how well I, having never replaced a graphics card, can talk about this point.

And all of that is good for the first ten hours or so, by which point you’ve had a chance to try out a little bit of everything and the shine comes off a little on some of the more luck-based tasks. Where the game unexpectedly shines is with the lore it sneakily builds into the background. One of the central hubs of the game is the abandoned community center, which has become a house of sorts for some Princess Mononoke-style forest spirits. Bring them certain presents, and they’ll fix the center up and do things for you around town.

That’s the one piece of weirdness the game overtly leads you to, but it’s only the tip of the iceberg: there are unremarked upon shrines scattered around town, a tower on the edge of the woods, the aforementioned adventuring caves (complete with guild), and lots of little scraps of information you first stumble upon and then seek out. It’s a small but crucial means of deepening the world to keep the player hooked beyond the surface-level mechanics. There’s not exactly a strong central narrative, but there is a gradual build of momentum around that lore, all happening just to stage right, in addition to the social link mini-stories with the various NPCs. It’s sort of like if someone had intentionally designed a game to be played the way most people describe playing Bethesda games. Sure, there’s some plot going on somewhere, and even an endgame of sorts (though you can play on past it), but it’ll keep. I’m comin’ for that squid.

Really, the only way I can recommend it more highly to you is with the fact that I’ve literally gone back to playing it the minute I finished posting this (it’s also a top-tier game for listening to podcasts – I personally spent many of those hours enjoying the dulcet tones of Oh No Ross and Carrie).