The Consulting Analyst – A Mother’s Secrets

YOU MEAN MY PARENTS HAD LIVES BEFORE ME?

Episode Specifics: The Count has dinner with Albert’s family, giving us a peek into the Morcef household: Fernand is a war hero and preparing to run for political office, Mercedes is a reserved and classy woman whom the Count seems to know, and Albert is their only child. Peppo plants doubt in Albert’s head about his mother’s fidelity after they spy Mercedes and the Count speaking on the balcony, but that doesn’t stop Albert from accepting an invitation to the Count’s house. Arriving with Franz, Maximillian, and Beauchamp, the youths are taken to a grand underground palace made entirely of gold, and a fantastical seascape, where the Count is waiting for them.

In keeping with the exploration of parents and children, which we’ll talk about further down, this episode is focused on underlining the childishness in Albert’s nature. Not only does Peppo easily make Albert uncomfortable with the mere suggestion of sex (which also ties into his discomfort around Eugenie and his response to the Count’s pointedly sexless-but-charged courtship), and the camera makes a point of having her speak through a marionette – not just a child’s toy that Very Adult Mature Albert still has in his room, but of course the added element that we’re watching multiple levels of puppeteering when it comes to both characters and the unseen Count.

It’s also an excellent chance, as we survey the outside of the Count’s apartments, to note how well the relatively simplistic background CGI is used to make Paris look unsettling. The bright colors and low textures, combined with the richness of the palette on the color designs or the detail of the paintings, make us feel as though our aristocrats are inhabiting a flat, fake world composed entirely of surfaces. Character Spotlight: Someday someone will write a full character study or perspective flip about Mercedes, and it will be a beautiful thing. For now, let’s talk about the tug of war she’s caught in. Not between the man she loved and the man she married, but by the pedestal she’s being shoved up on for simultaneous adoration and scorn. She’s more or less relegated to the role of secondary character, but the subtextual tension is very much there. On the one hand, young Mercedes is loving and intelligent and perceptive, the love of Edmond’s life and a fierce person devoted to her own decisions (even if the only place we get to see those decisions is in her romantic life). Even after she becomes known as the Countess, she uses her position’s opportunities to their fullest.

“Mercedes could have been queen, Monsieur, if the crown was only reserved for the most lovely and most intelligent heads. Her fortune was already growing and she grew with it. She learned to draw, she studied music, she learned everything. In any case, between ourselves, I think she only did all this to take her mind off it, to forget: she put all those things into her head to crush what she had in her heart.”

Meanwhile, she ultimately agreed to marry Fernand because she had been told over and over that Edmond was as good as dead and would never return (and they had no way of checking on that), and then on top of that tragedy Fernand, her only close companion besides Edmond’s dying father, went away to war and was nearly killed – leaving her terrified that she’d be left utterly alone in the world. And so:

“She grasped Fernand’s hands with a warmth that he mistook for love, though it was only joy at no longer being alone in the world, at finally seeing a friend after long hours of sadness and solitude. Then, it is true, she had never hated Fernand; it was just that she had never loved him, that’s all.”

And believing Edmond to be dead, she asks six months to mourn him and then finally gives in to Fernand’s constant haranguing for her hand in marriage. Meanwhile, Edmond hears about “she was desperate and sure you were dead and wanted to be content and comforted,” with a resounding “how dare she.”

“In effect,” [Edmond] said with a bitter smile, “that made eighteen months in all. What more could any lover ask of his beloved?” And he mutteredthe English poet’s words, “Frailty, thy name is woman.”

HEY ASSHOLE, HOW BOUT SOME COMPASSION FOR THIS GUY PREYING ON YOUR BELOVED’S EMOTIONAL VULNERABILITY. Mercedes is a heartrending portrait of quiet desperation, is what I’m saying. A different sort of survivor from Edmond by virtue of her position in society, but tragic nonetheless.

Courtly Intrigue Update: Peppo has a real knack for being in just the right place at the right time, doesn’t she (the subtitles Did A Bad this week by the by, but I don’t think that’s down to Albert – “aitsu” being a non-gender-specific term as far as my very limited knowledge goes)? It sometimes seems like half the writers’ purpose in creating a role for her was to give an extra layer of detail to the underlying class struggles of the series, which is particularly relevant as far as the Morcefs go. That tension is all over the place, with Fernand “tiring” of ostentatious meals but rejecting the supposed barbarism of Marseilles to the kitchen maids talking about the affairs of the aristocracy.

Adaptation Corner: I have to spoil something for you now, readers. It is this: the 1934 Count of Monte Cristo is…it’s pretty dire. No, that’s not fair. It does have its charms, primarily in the form of its lead, Robert Donat (interestingly, this was the only Hollywood film he ever performed in – snubbing his next offered role to work with Hitchcock in the UK, and then paying the price from the long-memoried studio system when he tried to return in the late 40s). Donat was clearly chosen for the Monte Cristo part of the role, and does quite well at exuding a balance of cultured iciness mixed with fondness for his loyal servants, Albert, and Mercedes. Unfortunately, the script calls for him to spend half the movie as Edmond Dantes, and he’s a lot more adrift as the fresh-faced sailor and scraggly, desperate prisoner he has to spend a LOT of scenes selling.

Which is the other thing – this is a two hour film, and we hit the hour mark before Edmond escapes from prison. It’s as if, aside of some bizarre and nonsensical changes (Mercedes has a mother who pressures her to marry Fernand, Caderousse is gone, Edmond figures out who he needs revenge on before he’s even put away), the film was quite determined to faithfully detail the first 200 pages or so; then, realizing about the running time, it set to hurriedly summarizing and condensing the second (Albert is engaged to Valentine, presumably because she fit the ingénue role better; Mercedes and Edmond are reunited in the end, and Albert is sort-of-kind-of-implicitly Edmond’s son), far more interesting 3/4 of the story. It shoots the pacing all to hell, and makes it a lot more unfocused than it could’ve been in adaptation.

None of the other actors are especially dreadful, though there are a lot of British accents in this French story (lot of DANtes and AlberT) and it suffers some of the inevitabilities of early studio talkies: all the acting is done on backlots that look quite fake any time there’s an outdoor scene, which is bad when you have a lot of shots of the sea, and there’s exactly zero restraint in the music (BOLD. BRASS. EAR SHATTERING).

But by far the strangest thing is how much of the historical context the film bends over backwards to leave in. TCOMC is deeply entrenched in the semi-current events Dumas was writing about, with a lot of the power plays that led to Edmond being locked away playing off of the very unstable political situation France underwent during the clashes between Bonaparte and the Monarchy. And while the book offers some exposition for readers, it very much assumes that the audience knows who’s who and why this intrigue is causing the characters to act in this way. In a modern American equivalent, it’d be like having Edmond Dantes locked away in Guantanamo without being charged, and maybe explaining that 9/11 lead to the prison being opened while assuming the reader would know about the culture of kneejerk patriotism and paranoia at being thought of as “Against Us” and holy shit I’m scaring myself with these cultural parallels.

While the original novel is a fascinating historical document and probably has far fewer problems being streamlined for adaptation in France, in other cultures the decades have added this weight of cultural context that demands to be dealt with. The immediate impulse might be to preserve it clumsily, as the 1934 film does (I lied: the bit part who plays Napoleon is sort of amazingly terrible). But in fact, one of the strongest choices Gankutsuou makes is in only suggesting the Count’s backstory, and in making sure the flashes that are seen rely intensely on interpersonal intrigue. This gets a little muddy with Villefort, but for the most part it preserves the nature of the conflict while plucking it out of its associated baggage. It’s brilliant, giving the show plenty of room to explore the other bits of “present day” intrigue in depth. 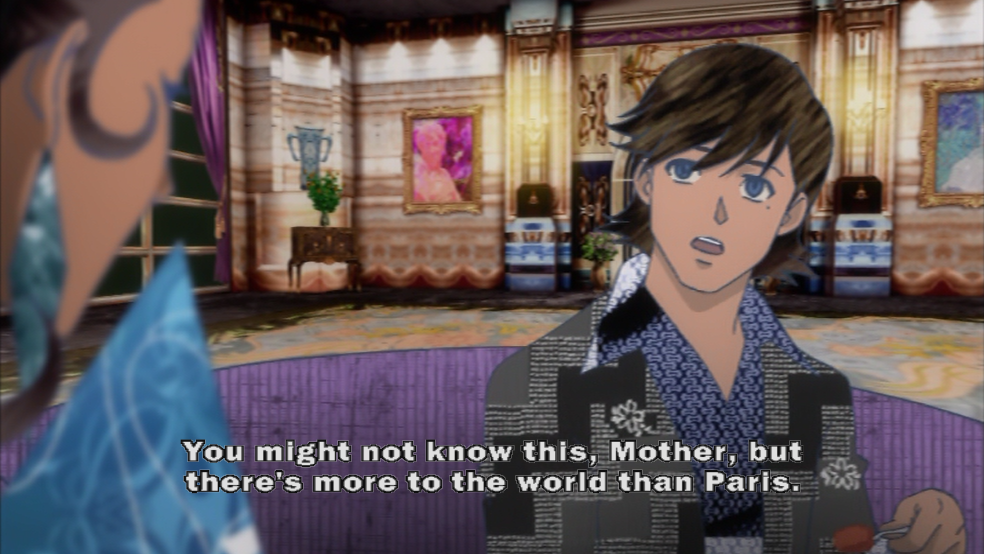 Themes: One of the most understated and most terrifying moments of growing up is realizing that your parents are fallible. It can occur at any number of ages and in various circumstances, but it changes the way one looks at life forever. Albert goes on in great detail about the things he’s learned in the world that, of course, his parents would never know about – why should they? They’re only his parents, and he has no conception of them outside the face they’ve presented to him. The very concept that his mother might have loved someone else, that the stability of his “home base” might change, is enough to seriously unbalance the kid, and likewise shows that his new magnanimous views of culture and life and disregard for class complete exclude awareness of his own privilege. As we’ve discussed before and will many times to come, Albert’s great sin is his lack of self-awareness. He doesn’t understand his position in the world or his effect on others, and that leads to his loved ones getting hurt.