The Consulting Analyst – An Introduction to The Vampire Chronicles 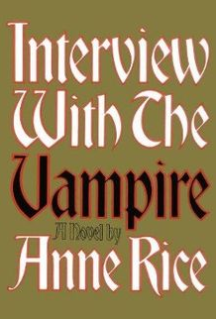 Longtime readers will know that it’s traditional for this blog to run two Consulting Analyst series at a time – it provides a little variety for readers who maybe aren’t into the main series going on, and it keeps yours truly from hitting the burnout train and thus not giving the main series its analytical due. That’s particularly true with Gankutsuou, which is easily the most research-intensive series that’s been featured on this series to date. Which is all a very long preamble to say that we’re counteracting the blue space vampire. With nostalgic trash vampires.

I mean Anne Rice. We’re doing – we’re reading Anne Rice. As to why, I suppose it’s once again Story Time With Auncle Vrai. Siddown, darlings, let me tell you a thing. Thanks to the internet it’s fairly easy nowadays to find lists detailing published novels that have prominent queer characters and relationships (if not as common on the bookshelf as it could be). And what big name publishers don’t provide? Well, there are boutique and self-published works, never mind the ever growing influx of quality writing online being recognized as legitimate forms of artistic expression. If you were, say, a middle schooler in the early 2000s, stranded with no resources or mentors and barely a clue of what they were looking for besides some astonishingly low-quality browsing on FF.net? The last of which, might I ask, a person better damn well hide lest they be seen as perverted weirdos taking perfectly good media and “making it gay?” Friends, for that kid The Vampire Chronicles were a revelation.

Interview with the Vampire was published back in 1976, and is more or less the reason we now have Twilight – it shifted the focus from your tradition Stokerian model of the victims being stalked by a terrifying but alluring monster to hearing that monster’s story, thereafter spinning a tale of woeful existentialism and fraught, yearning relationships. It’s essentially a meetup of a romance and horror novel with a lot of good old Southern Gothic style prose worked in, and it’s beautiful. For as much as culture wound up taking the “vampires are misunderstood, pining creatures” thing and running with it until we got to sparkling in a sunlit meadow, there’s a great deal of bloodletting in Rice’s original works. The victims might not be the focus, but it’s still very much a story soaked in blood and horrific happenings, with some creative deaths that would’ve made Argento proud. It’s pulp, through and through, and still a damn fine example of the vampire subgenre. 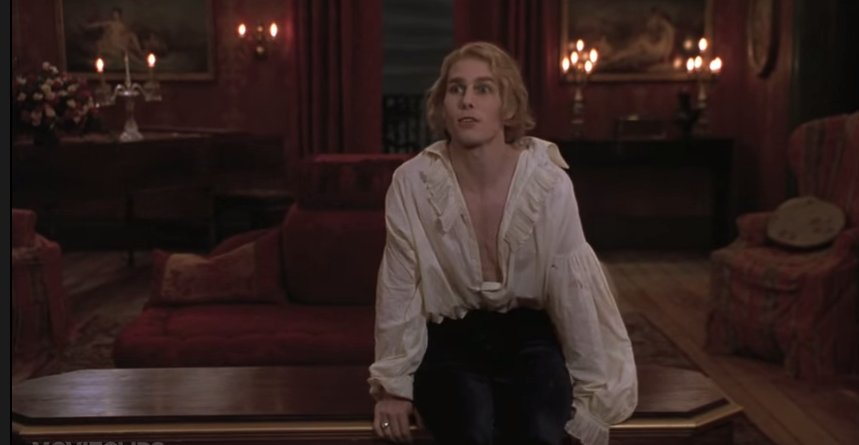 Among the many things Tom Cruise is: really damn good in this film

It’s also a queer love story at heart. Not that that fact hasn’t been hotly, stupidly debated pretty much since the novel came out (if you want to take a gander at how well that stupidity has survived, here’s a comments section, and don’t say I didn’t warn you), but it’s quite true nonetheless. The book, and it’s first two sequels The Vampire Lestat and Queen of the Damned are, among other things, the story of the fraught romance between Louis de Pointe du Lac and his tempestuous, mysterious maker Lestat de Lioncourt: how they found each other, their brief happiness and considerable misery, and how the then-modern day brought them together again. The series’ conceit of having previous books exist in-universe as published memoirs, allowing for a considerable element of unreliable narrators, adds a unique and engaging element to trying to figure out what “really” happened and what amounts to these two characters trying to pick at and impress one another across time and space.

It’s truly unique and wonderful, even more so for when it was released. To see that sort of relationship explored in a “real” book, a best-seller that was made into an equally profitable movie? Mind blown. Let it never be said that representation isn’t important. Not even Good, Role Model Representation (though that’s good to have too, now that it’s actually in the realm of possibility) or Sad Tales of Gayness (pretty much the option at the one Barnes & Nobles shelf), but opening up your latest quest for genre fiction and finding yourself there in some small form. The power that has to make one feel less alone in the world really cannot be underestimated. And that trilogy of books has sat, much beloved, on my bookshelf for over a decade.

There is, of course, the problem that The Vampire Chronicles as a series technically consists of eleven books. I feel like I could tell you that after QOTD Anne Rice had become successful and famous enough that she was able to insist she no longer needed a content editor. Just someone to more or less spell check and then push the books out the door. Perhaps you can guess as to the impact this had on books four to eleven. On things like characterization. And chronology. And baffling narrative choices. You ever figured you’d end up reading a book where a vampire went back in time and drank the literal blood of Christ? Because I read that book, readers. I read it, and was sorely sorry.

And then there’s the fact that Anne Rice herself had an enormous impact on the burgeoning culture of fandom as it adjusted to sharing in the age of the internet. From this one author came the idea of “internet lawyers,” the disclaimers you’ll regularly find on fanfiction written in the mid to late 2000s regarding ownership of the original work, and a certain level of secrecy and password protected content. Anne Rice, you see, didn’t just disapprove of fan content being made in response to her work. She sent cease and desist letters. She threatened to sue individual fans. Whole sites went dark, hundreds of thousands of words and art pieces vanished, and a culture of fear reigned. Imagine, if you will, fanfic writers living in the same paralyzed state of fear as the most notorious film pirates. It was a dark time, internet. Very, very dark. Things have changed now, with fan culture becoming more prominent and basically accepted by mass culture, and that era seems more or less consigned to obscure memory and wiki write-ups. But I’ll be damned if I’ll let it be forgotten. Not when the ripples of effect destroyed relationships, and was the very time period when yours truly had a panic attack so severe at the thought of being arrested for participating in fandom that I left the internet for six months, and fandom participation for literal years after that. I have not forgotten, Anne Rice. None of us from that time have. 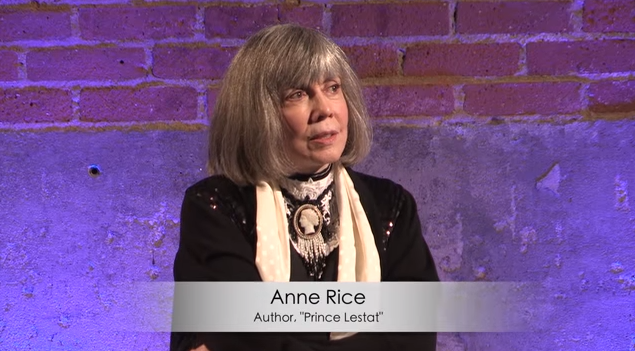 It’s that strange mesh of emotions – fondness, resentment, reverence, distaste, all of that before we even begin to unpack the content of the books themselves (for even what I’d call The Good Ones have quite a bit of eye-brow raising content to analyze) that makes me yearn to share these books with you. This blog’s never done a book analysis either, so it’ll be something of a learning experience (with a fair number of notes taken from Jenny Trout, Cleolinda Jones, and a fine tradition of book flogs)  – what’s a writer if they’re not ever seeking to improve? So let’s go through this together. Every fourth Friday, we’ll dig into a chunk of genre lit history and discuss. Perhaps, if we’re very lucky we’ll evoke the proud tradition of interrogating the text from the wrong perspective. Only not really lucky. But don’t worry, I’m boning up on my Fair Use.

We’ll definitely be taking a journey through those first three books – Interview with the Vampire, The Vampire Lestat, and Queen of the Damned – with summary and analysis, and most likely the two major films based on the first and third entries as well (hint: one of them is great fun, and the other one induces great deals of rage). Beyond that? I suppose it’ll be up to you, readers. I am fully prepared to go to war through the whole damn thing, being well familiar with the principle of “I’ll suffer and report back so that you don’t have to.” We’ll cross that bridge when we get to it. In the meantime, here’s to a new experiment!

Tagged as: Books, Culture and Such, Interview with the Vampire, Movies, The Vampire Chronicles