Seraph of the End – The Fine Line Between Trash and Garbage

I came to Seraph of the End looking for a fine helping of trash, and it delivered with aplomb. Unfortunately, it came with a whole lot of garbage on the side. I should explain.

Trash gets a bad rap. Related to but not the same as a guilty pleasure, trash is something that just about every consumer of media has in their lives. It’s the entertainment equivalent of walking around your apartment naked and eating comfort food: it’s not for everyone, and you wouldn’t insist someone else enjoy the activity as much as you do (for you know in your heart that it is just a little harmlessly gross), but it’s an important part of letting off steam. Trash fiction is the stuff of shortcuts, the itch-scratching aesthetic or tropes that an audience has come to indulge in their purest form – not a clever or elevated, new take on the material that might hook a broader audience, but the pure, uncut stuff. As long as there’s competence enough to hold those bits together, your audience is there.

Garbage is not trash. Garbage is clunky and tone-deaf and maybe offensive. It’s not indulgence but failure, pure and simple. Garbage is the smelly, rotten bananas you’re possibly willing to pick through to get to something good, and everyone rightfully has their own limit of what they find to be an acceptable garbage level. Garbage and trash? Not a thing you want to mix in large quantities. 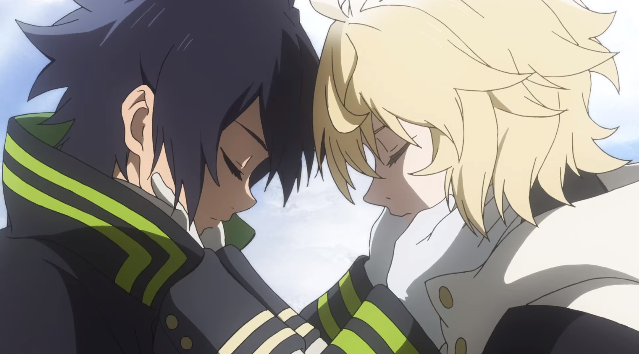 Which brings us, roundabout, back to Seraph of the End: a sweet caramel center of Trashy Queer Vampires that speaks to the part of me irrevocably marked by reading Anne Rice at 14, and the towering garbage heaps of clumsy writing and terribly written female characters you have to wade through to get there. Let’s take a closer look.

The story starts with an origin story wildly different in tone and style from everything to come after it: in the Not So Distant Future a disease runs rampant across the land that kills a huge swath of the population over the age of 13; in the midst of this chaos many children are brought under the “protection” of the vampire population, which means being used as living blood bags in exchange for housing and not being murdered by the beasties and supposed disease lingering outside. Living in this dystopia are our protagonists, orphans Yuichiro and Mikaela – the brash-one-with-heart and the sweet-faced-pragmatist respectively. The pair make a plan to escape with their small family of orphans to the outside world only to find out the map they’d stolen was part of a trap. Everyone is killed, and Yu is forced to leave a dying Mika behind as he reaches the outside….where he’s met by some very alive humans who tell him he’s The Chosen One.

That divide is the tug of war where the series lives. Half the show from there falls into High Concept Shonen number 7835, where a now 16 year old Yu is attending a post-apocalyptic high school for God knows what reason as he tries to qualify for the elite vampire hunting squad to get revenge for his dead family. He has adventures of the week and learns about family and it’s all really bog-standard with a few nice flourishes and a lot of repetition. The other half is the Tragic Starcrossed Vampire story with Mika (spoilers but not, because it’s pretty prominently in the opening from the word go), who’s suffering tragically in the hopes of seeing his beloved Yu again and saving him from the eeeeeeeevil humans. Eventually these two narrative threads have to come together and produce a big, flashy war story, and the results are…dodgy. The strength of the school stuff tends to be in its gentle mild self-awareness in the tropes it’s playing with, which get set aside once it’s time to start racking up the body count. And without that humor, all of the stuff around it isn’t innovative or subtly written enough to stand up. This is a show that came back for its second cour and, right out the gate, starts with two characters fighting over a third, dead character whose relationship to the first two is spilled out in the clunkiest exposition I think I have ever heard. 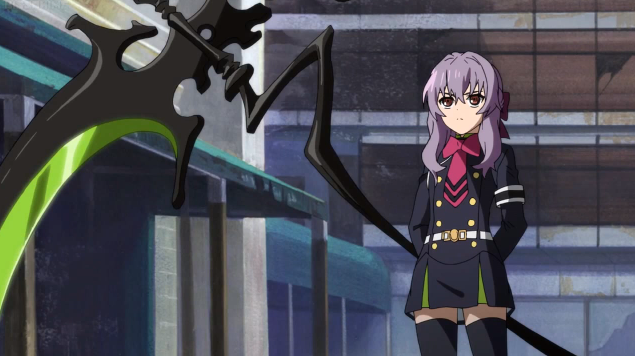 Which is probably a good time to talk a bit about how abysmal the show is in its treatment of its female characters. While it features an absolutely crackerjack deadpan smartass in the form of Shinoa and a few interesting side characters (including Krul, whom the anime decides to fuck over at the last minute because, I dunno, she was too in danger of getting shit done?), the show on the whole gets pretty low marks. While this post-apocalyptic military supposedly has gender parity the female fighters are almost universally the ones who screw up at important moments so that a dude can rush in and save them, sacrificing any competency to make another character look good.

And on a deeper structural level, the plot basically turns on the axis of several female characters….one of whom never actually appears in the show, and whose prominent after-death effects are explored almost exclusively in terms of how it affected her male lover and not, y’know, her little sister who’s a main cast member. The women of Seraph have glimpses of intriguing interiority that the plot has no interest in, sacrificing screentime they might have had in favor of once more doing a journey-to-the-mind on one of the three male leads (two of which have dead or incapacitated women motivating them). It’s one of those things that’s difficult to point at because it doesn’t shine as obviously as a bunch of panty shots (the male gaze element is at least fairly restrained, small mercies). But it leaves a frustrating undercurrent to see these characters that are set up to be interesting and then utterly ignored (and “it was explored in a prequel book” is not a good enough excuse – you’re adapting the story for a new medium that’s meant to stand on its own, so you’d better be prepared to shape the story in a way that incorporates the backstory you have available).

The thing is, when all of that is said and done, I watched this thing from beginning to end. Binged it in a single day, in fact. Because when the story decides to give into being a melodrama about star-crossed vampire lovers, it is absolutely top notch trash. Yu and Mika have amazing chemistry; and rather uniquely for shonen stories that turn on this whole “opposite sides of the conflict” thing, they’re both equally committed to saving one another and value the bond between them (as opposed to your more traditional “I’m becoming evil so I will cut away these ‘friends’ but really deep down I miss them’). The conflict comes instead from their opinions on what exactly being saved means, and that’s enough of a unique twist on the formula to make their scenes enticing. Seeing these two get back together is the emotional core around which everything else is so much detritus, and it’s really compelling. 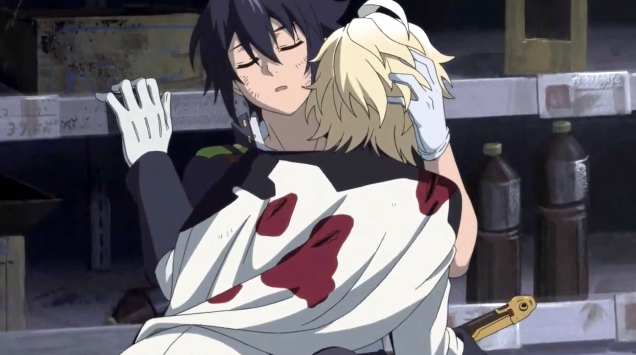 And while it technically falls under the shonen baiting umbrella of “no kissing and we technically have a lady who’s crushing on the hero that we can bring in as a failsafe,” it really does scream out above and beyond as a romance (here, have the Funimation crew being really cute and geeking out about the ship) – it’s pretty much impossible to avoid with the erotic connotations that have been part of the vampire stories for centuries (queer vampires particularly going back to Carmilla in 1872). And while it would be the most tiresome of fallacies to say that romance is inherently more important or higher stakes than a platonic relationship, it’s also true that that excuse is used far too often as a means of selling merch without actually having to have real queer representation. So yes, the show would feel incredibly cheap if it were to pull back in future seasons or adaptations and introduce a no-homo love interest for either of its leading lovers.

It’s hard to recommend a show off of one solid central relationship and a few nice touches on the side, which is why I started out with the discussion of trash. If you’re starving for queer vampires (and can deal with all the rest of the BS), then this is absolutely a thing you need to see posthaste. For everybody else….well, there’s nothing the show doesn’t do with its setting or concept that other shows haven’t done bigger or better, and while there is some creative cinematography and staging it really can’t make up for the fact that this is an action anime with a fairly standard medium-end budget and a more or less standard visual aesthetic. If you’re not here to wallow in the quality trash, I’m afraid it isn’t for you.

Tagged as: Anime, Reading into Things Again, Seraph of the End