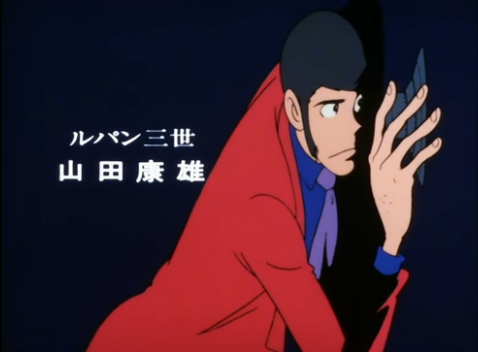 The rampant success of Lupin III Part IV (or “Blue Jacket,” colloquially) seems to have stirred new interest in the franchise. Which means a fair number of poor souls who try to take things chronologically – an admirable feat up until one inevitably runs up against Red Jacket, the character’s most famous outing. I’ve seen a lot of earnest souls crash and burn trying to binge those 155 episodes, unaware that three years of content that premiered weekly come hell or high water means a veritable rollercoaster of quality. When Red is good, it’s some of the best stuff the franchise has to offer. And when it is bad, it makes you regret setting out in the first place.

The nice part is that the series’ total lack of continuity makes it easy to cherry pick sample episodes, a flavor for people who want to get a sense of anime history and a solid foundation for anyone who wants to eventually make the deep dive. So let me give you my top ten – not anything like an objective list, because that is a fool’s errand with that kind of backlog, but a way to share the love and decrease the daunting factor at least a little bit (don’t worry, I’m here to help you out with Green Jacket too).

And for those who’re curious, yes you should absolutely try the dub when it’s available. The translation’s loose as can be, particularly in the early going, but often in a wonderfully self-deprecating way and backed up by a truly wonderful cast. Nothing’s going to replace the original (and you’ll end up watching both, since only half the show was dubbed), but it’s a treat.

Note: For ease of search, these are listed in airing order rather than ranked. I’ve also tried to include as many of the relevant eight million title translations as possible.

A famous hitman, “the Puma,” declares his intent to assassinate Lupin, forcing the thief into hiding. Too proud to take the cabin fever, Lupin faces the man in a duel and seems to die.

A good early episode to try if not an ideal first outing – it’s an excellent showing of Lupin’s skills not just as a thief but as a con (as well as the fact that he can be both childishly impatient and quite brilliant in quick succession); it’s also a good early snapshot of the loyal but sometimes uneven bonds between Lupin, his gang, and even Inspector Zenigata. A good bridge for anyone previously familiar with Green Jacket. 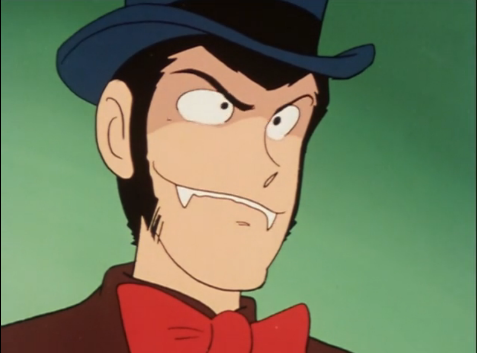 9. Lupin Becomes a Vampire (But Your Brother Was Such a Nice Guy)

Lupin gets more than he bargained for when his plot to steal a golden statue of the Virgin Mary awakens an ancient vampire hellbent on taking it back.

155 episodes means that things have a tendency to get weird. Not just weird, but weird in that special, hazy 70s way that really has to be seen to be believed. This is hands down one of the most out there episodes Red Jacket has to offer, the kind whose description requires the addendum “no shit.” If you make it through this one, you’re prepared for any surreal oddities the show might throw at you.

And it helps that it’s downright hilarious in how straightfaced it plays its newfound supernatural elements, an escalation of pure WHAT that still somehow seems to fit in with our gang of goofballs. The bit the dub’s title comes from, y’all. You have to see it.

An apparently failed heist at the Kentucky Derby masks a hidden plan to get at the treasures of a highly protected vault.

A solid early heist episodes, with a simplified caper plot. It’s what you might call “Pure” Red Jacket for a given value, an excellently done version of the basic archetype that the show would return to with varying levels of effect. For anyone pulled in by the promise of a “master thief,” this is a high quality place to meet that expectation.

7. The Border is the Face of Farewell (Getting Jigen With It)

Jigen is shot during a heist and separated from the gang. He’s saved by a Russian ballerina who offers to help him escape in exchange for taking her along, so that she can fulfill her dreams of making it to America.

Red Jacket is a product of the Cold War, something which is often in the background of certain episodes but comes all the way to the forefront here – the entire plot revolves around the fact that this woman is struggling to defect at the potential cost of her own life. But more important than the time capsule element is the fact that this is a damn solid Jigen episode, and certainly the best of the handful that gave him a one-off love interest. The survival-travelogue gives the relationship a backbone and a believable ticking clock, and the third act offers genuinely moving emotional payoff from not just the “romance” angle but the Lupin family as well. One of Red Jacket’s finest.

6. Shooting Orders!! (Beauty and the Deceased)

Lupin narrowly escapes the deadly bullets of the marksman assassin Beauty, and must scramble for a way to save his skin.

Now I know what you’re thinking: TWO “Lupin versus an assassin” episodes, in one list? But I chose them both for a reason – while they share the same basic plot their methodology is almost completely different, serving as an excellent water mark for how the series grew over time. Unlike “Lupin the Interred”’s focus on Lupin’s ability to outsmart even his closest companions, most of this episode revolves around the gang coming together to protect an incapacitated Lupin from the ICPO-sanctioned killer coming after him. It’s a rewarding moment of pathos in a show that doesn’t always have time for it, set alongside a genuinely threatening antagonist and smart enough to balance that family dynamic with Lupin’s eventual quick thinking.

5. The Woman the Old Man Fell in Love With (Zenigata Getcha Into My Life)

Zenigata is charged with protecting Laura, a young woman whose voice is the key to a deceased mobster’s valuable safe. Desperate and pursued, Zenigata enlists Lupin’s aid.

The key to having a comedic antagonist is occasionally throwing them a bone, lest the audience eventually start to think that the characters we’re supposed to be rooting for are actually kind of jerks (looking at you, Pokemon). While Zenigata-centric episodes are rare, they’re always welcome and done with a genuine respect and love for the character. At its best the show mirrors Lupin’s feelings – Pops can’t catch Lupin, but nobody else better lay a hand on him.

This is one of the first episodes to straight-up make the ICPO officer the star, and it proves to be a poignant outing. Zenigata’s earnestness isn’t for bumbling comic relief here but a reflection of what, in other circumstances, makes him continue on his hopeless chase. It’s both a solid grasp of the character and an effective shift in mood.

Hoping to rise to fame by killing Lupin, the deadly duo of Wolf and Rose capture Goemon and torture him in an attempt to find the master thief’s weakness.

Ah, “the Goemon torture episode.” This one is rather infamous for how dark it gets relative to a lot of the increasingly goofy episodes around it. Parts of this one are downright brutal by the series standard, and even by that of the occasionally darker Green Jacket (though nothing on modern day). And while it’s arguably jarring, it’s nice to see the series stretch itself and pull off the difference in tone. When talking about how this episode is dark people often forget to mention that it is effectively so.

It’s also extremely rare to see a script spotlight not just Goemon but his importance to the rest of the Lupin family. More episodes than not just have no idea what to do with the guy, and shunt him off to the side until it’s time to cut something. While The Fuma Conspiracy is his best time to shine, it’s nice to have a little reminder that the gang would be heartbroken without him. 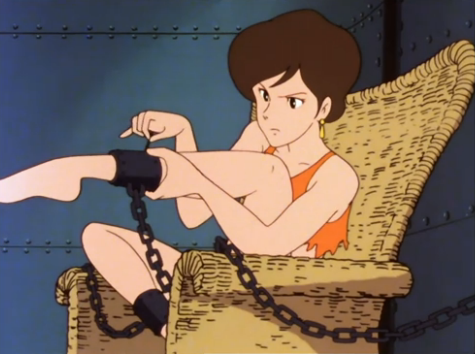 Just as Lupin and co. are taking a day to relax, Fujiko charges through followed by gunfire and is captured by a villainous tycoon. But she leaves behind what the man was after – a detonator plug meant to power a secret A-bomb carrier.

One of two Red Jacket episodes Hayao Miyazaki returned to direct after he got his start working on Green Jacket and The Castle of Cagliostro. Yes, both of his contributions look like micro-Miyazaki movies, complete with the love of rolling green hills, steampunk aircraft, and exceedingly cute and rounded designs for the gang. It’s also a damn triumph, with a tight pace and well executed action slapstick across the board, and the single best portrayal of Fujiko in all of Red Jacket. Any time Miyazaki directs Fujiko is a happy day.

It’s only tokenly a heist, but then so many episodes by this point were. And while it plays to Miyazaki’s pet issues it keeps the gang front and center and all but oozes fondness for them. It’s just fun, and probably stands the test of time better than almost any other episode.

Lupin tries to steal a diamond secured in a seemingly impenetrable skyscraper, reachable only by a single glass elevator.

This is the platonic ideal of a Red Jacket episode. The plot concerns the plan for a seemingly impossible heist, the episode makes sure to pay attention to every member of the main five in some meaningful capacity, and it has extra-high quality animation to boot. Everything that’s great about the series is on display here, everything worth picking up and carrying over to the next generations. It’s the one you put in a museum as a representative sample, a proud last hurrah for one of Japan’s biggest cultural touchstones.

A dangerous robot has been robbing stores all over, seemingly at the behest of Lupin III. But Zenigata is sure this is the work of an imposter, and is determined to get to the bottom of it.

The OTHER Miyazaki-directed episode, as if you couldn’t tell by the proto-Nausicaa and the Castle in the Sky robot on display. It’s arguably more Miyazaki than Lupin (in the way that, say, Batman Returns is more Burton than Bats), but that doesn’t stop it from being a breathtaking finale.

No one else would’ve done for bringing the series to a close, and this episode carries the same fond, gentle melancholy of the masterful Cagliostro. But while that film feels like an eternal “final story” for Lupin, this is more Miyazaki’s farewell to the character who gave him his start. There was no way and no point to trying to put a narrative cap on the series, and so while it’s not initially intuitive it’s a perfect loving tribute, a grown up rather than explosive goodbye. And good lord does it look beautiful – absurdly smooth animation for the 70s, crisp and beautiful colors.