Hatoful Boyfriend Writes its Own Fanfiction

After finally knuckling down to get a Steam account in order to start at least trying to catch up on my lengthy to-play list, I wound up crying more tears than my previous years of gaming combined. The first offender was The Walking Dead Season 1, aka “Ugly Cry Generator 2k12;” the other was Hatoful Boyfriend. You know, the pigeon dating sim?

The revelation that Hatoful secretly contains a clever narrative isn’t new, certainly not for the small but dedicated fanbase that have dutifully bought the game, HD remakes, spinoff manga, a web miniseries, and plush toys while creating some pretty fantastic fan works. But since the game’s sequel, Hatoful Boyfriend: Holiday Star, has just been localized and released on Steam, it seems as good a time as any to look back on why the original game works so well as both an extended meme and a gripping mystery. Basically? The game knew how to write its own fanfiction.

First, a quick rundown for the unfamiliar: the game’s pitch is that the player is the first human (Hiyoko Tosaka) to attend a school for hyper intelligent birds; from there you go to class, attend clubs, make friends and, in true dating sim fashion, potentially woo one of said new friends. It’s all very silly and self-aware, buoyed by a legion of bird puns that will come across as either unbearable or deeply charming and a player character infused with her own distinct, endearing character even as the player guides the gameplay decisions. It might be right up there with Ouran High School Host Club in simultaneously poking fun at and indulging in the tropes of its genre. It’s basically one joke with executed well, with enough warmth to sustain people who buy in initially.

There comes a turning point when the player finishes all of the “routes” for each major character (i.e. dates all of the birds, a process that takes about five to six hours at the outside). At that point a player can start a new game with the option to “fulfill a promise.” And doing so unlocks an entirely different story known as “Bad Boy Love” (yes, I’m pretty sure the pun is intentional). It’s not quite a game, per say. This second story mode is a full on visual novel, and the player options affect little more than response dialogue or a nonstandard game over. It’s more like a reward for doing the silliness: here is context for the hyper intelligent birds, for the single human student, for the strange demolished buildings that Hiyoko passes by when she goes jogging. Here is payoff for the various relationships between NPCs that is necessarily background information because of how dating simulators, by their nature, function.

I have seen a few complaints as to why this “real game” is hidden inside all of the fluff, most high profile in the form of Achievement Hunter’s Ryan (it’s really clear visual novels aren’t his thing, and that’s entirely fair). But the emotional weight absolutely depends on the BBL route being a “win” state of sorts rather than immediately accessible. While it could still be an interesting concept divorced from its surroundings, it’s made far stronger by the context that precedes it. It’s hard to launch straight into a murder mystery and genocide conspiracy, which by design works on a timeframe of a single night, when you have to establish why the audience should accept that super smart birds exist and that they’re worth investing in emotionally.

That high concept sticking point has been the death of many, many sci-fi and dystopia stories, and the fact that “the silly bird dating sim” found a way around it so deftly is decidedly cause for applause. And yes, it mimics the structure of interaction between canon and fandom. The main drive behind the creation of fan works, in art or print or discussion, is a combination of love for the presented story and the desire for more. We create fandom because a work of fiction has touched us, and we’re not ready to let go. Maybe that’s filling in gaps that weren’t in canon, or extending the story, or playing in an established world outside of what we’ve seen. It’s all in service of the communal sharing of more.

There’s a tonal element to this drive as well. While it’s expected to see work that emulates the tonal style of the original story (love story, murder mystery, silly hijinks), there is always, unfailingly, a tidal wave of fanworks that are the exact opposite of the original approach. You’ll never hurt for secretly-grim-and-gritty remixes of Animal Crossing or My Little Pony, or for silly comics where Hannibal’s cannibalism is a breezy punchline and Kylo Ren is a grumpy emo teenager benignly exasperating his parents. Why this happens is a far bigger sociological question than this single essay can tackle, so for now let us merely accept that it does. Fans love a thing, and they stretch it through a full permutation of story types in their quest for more. 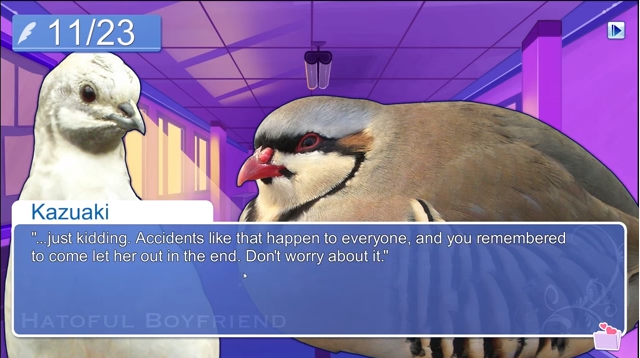 Hatoful Boyfriend knows that this happens, and it plans for it. The joke is that the change to “HURTFUL BOYFRIEND” comes out of nowhere, but that’s not entirely true. It’s not a game devoid of pathos even on the surface – several of the branching storylines have a vein of melancholy underpinning them. BBL, in truth, is merely a take on the main game’s “hardships are eased by interpersonal bonds” approach and cranked the intensity and scale of the hardship up to twenty. Hints of dystopia, tragic backstory, and old conflicts are threaded through the main story, and then they’re brought to the fore for BBL. Characters that are broadly defined are allowed to grow and change in relationship with each other rather than existing largely through their interactions with Hiyoko. It creates the impression of an enormous shift while remaining consistent with the larger themes at play, feeding both impulses of fan interaction without sacrificing its integrity. It’s the kind of gambit that can only really work in an interactive medium, because the player must progress through the changes rather than jumping in post-change (as one could with a comic or TV series). And the fact that it continues to work even with foreknowledge that it’s coming speaks highly of how engrossing the writing is.

The spoilers here are as light as possible, because I really would encourage you to give this game a chance. It’s charming and quite affordable for the amount of content provided (I personally clocked in at about eight hours) – the base price is $10, and if you’re willing to wait for one of Steam’s big sales I’ve seen it sell for as low as $2.50. Holiday Star is weaker, jettisoning the interactive elements for an entire game structured around BBL’s “short story with nonstandard game over choices” approach and taking a measly four hours to complete (though if you can get it on sale, it has its own share of quality heartbreak). Let this be my New Year’s gift to you, readers. Go forth, date a pigeon, and then cry about it.

Tagged as: Culture and Such, Hatoful Boyfriend, Reading into Things Again, Videogames