Who I Was, Who I’ll Become: Sound! Euphonium’s Two Love Affairs

This essay was commissioned by Sinclair. You can find out more about commissions at my Patreon page or contacting me on Twitter or Tumblr.

Sound!Euphonium is a show about two girls bonding over high school band. What kind of bonding? Well, that is ever the question, and there are many complicating factors when trying to come up with an answer (even more than the usual issue of Japan’s fraught relationship with earnest LGBT representation). The show walks a fine line in arguably playing to and at times subverting elements of the Class-S genre (which emphasize “pure” emotionally intense relationships between young women that are confined to high school/”practice” for heterosexual relationship), studio KyoAni’s usual infatuation with mixing beautiful animation and baseless fanservice, and moments that feel frightfully close to sincerity.

In the name of appreciating the delicate, dangerously close to ship affirming ambiguity of these first 13 episodes before the sequels arrive, let’s look at Sound!Euphonium’s central relationships.

Sound! Euphonium bears the structural imprint of its content; that is to say, while it’s technically a story of individual pieces, each occasionally given their chance to rise to the spotlight, in the end it’s the collective sound that rises to prominence. The character beats – Reina and Kaori’s struggle over the solo, Hazuki’s crush on Shuichi, Asuka’s inscrutable mask – are the equivalent of sectionals, brief peeks and rehearsal sections that contribute to or detract from how the band functions as a group. This is important to remember in any discussion of the show’s relationships and the significance of who is given prominence and when, particularly given the fact that anime generally and KyoAni infamously have a reputation for playing on marketable queer subtext while treating less developed heterosexual attraction as a case of plausible deniability.

That worry usually centers around the case of protagonist Kumiko’s relationships with Reina and Shuichi respectively; with an occasional token nod to Reina’s token, one-off comment about having a crush on band instructor Taki (no more token than the comment itself, in fairness). Because there is no romantic finality to the end of the series, things turn instead to reading moments: who had the biggest part, who had the spotlighted interaction during this or that climactic moment in the plot. This isn’t an entirely misguided approach, given that a lot of media will block out scenes for a romantic subplot to add emphasis right before a major occurrence in the main plot (think of Madoka comforting Homura in their last moments together, or the last conversation with a love interest before the final battle of any Mass Effect). Those beats are very common in “hero’s journey” stories, and we’ve been trained by a lifetime of media to look for them.

But for SE, relationships are things we are given a peak into before returning to the group dynamic – sectionals before the ensemble. And this is true of both opposite and same sex relationships. Goto and Riko’s relationship, for example, is an “open secret,” and while they are always together and others occasionally comment on their romance, there are only two occasions of romantic dialogue passing between them – and one of those has to do with why they’ve joined a particular section of the band. Yuko’s devotion to Kaori fuels an entire arc of the series, but the psychology of that bond is never so important as the way it causes the characters to affect the group dynamic.

And so on. While this can sometimes be frustrating, calling on the viewer to fill in a great deal of backstory on their own if they have interest in a particular character, it also means that one must put away the automatic mindset when exploring what makes an “important” character interaction.

Shuichi: Acknowledging the Past, Struggling in the Present

At the beginning of the school year, Taki asks the band whether they want to have a good time and make memories or strive to make it to the Nationals. The students choose the latter, but the tension of those two ideals never fully disappears, particularly as each student hits their own walls of playing ability. And for Kumiko, the process of finding her limitations and striving for greatness often shows itself in her relationships with Shuichi and Reina respectively.

Kumiko’s relationship with Shuichi is characterized by dissatisfaction with the status quo. On the one hand he represents the “before” of her fresh start, the thing that she didn’t manage to break away from (he’s still at her new school, and she’s still playing the euphonium). At the same time, they’re in a place in their lives where even trying to stay the same is impossible: Kumiko has to grapple with Shuichi’s crush, and Hazuki’s insistence that they have feelings for each other even after Kumiko’s turned him down in favor of preserving their friendship. Even if they choose or fall into the same path as before (as with Kumiko and the euphonium), the context of adulthood, puberty, and the more complex challenges therein demand to be dealt with. 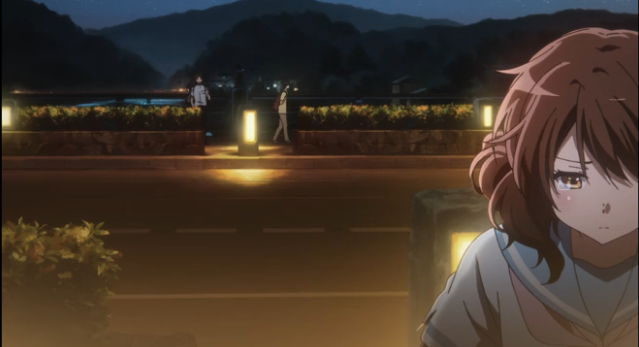 Following the festival episode (not coincidentally, the same moment when Reina declares her desire to be special and her intent to become closer with Kumiko), Shuichi is mostly seen from a distance. Kumiko glances at him from their separate places in the band, sits at a distance on the train, or glimpses him from the street as he works to master a difficult stretch of music. Even when they interact, there’s an imagery of “distance” between them, be it Shuichi’s glimpse of Kumiko’s frustrated breakdown from the other side of the bridge (separated by traffic), or the pair of them playing a duet from separate banks of the river. They can still reach each other, and do so in moments where Kumiko hits a wall with her playing, but the effect of Kumiko’s changing goals is evident in the art direction. Even when that distance is closed again, just before they take the stage at the competition, it’s blocked with the pair facing the same direction rather than toward each other; while the fist bump that follows becomes a sign of Kumiko acknowledging her past as part of her growth rather than running from it. He’s still important, in other words, but he’s not the future (or so it would seem – we’ll return to this in the conclusion). 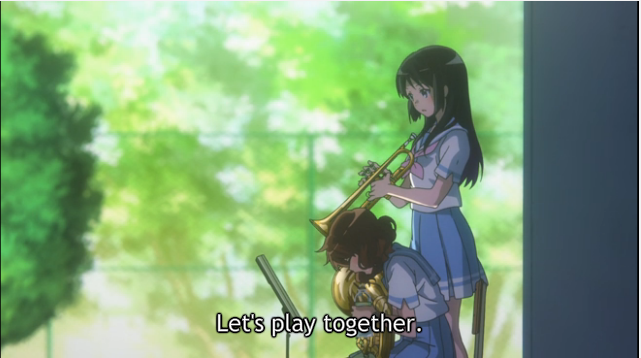 Reina: A Leitmotif for the Future

A leitmotif is defined as “a recurrent theme throughout a musical or literary composition, associated with a particular person, idea, or situation.” I mentioned before that Kumiko and Reina’s duet (a piece called “The Place We Found Love,” if you were interested) forms the halfway point of the series, complete with full end credits, but the importance of their bond is far more entrenched than that. The series begins with the divide of passion between Kumiko and Reina at their last band competition, and ends with their newfound triumph, hands entwined as a culmination of that “confession of love.” Kumiko’s “all is lost” moment on the bridge breaks when she realizes that this was how Reina felt during the last competition. Reina is in close proximity during Kumiko’s moments of growth. Without Reina, there wouldn’t be a series (I’m going to leave off discussion of Reina’s crush on Taki, beyond noting it as her own version of “the past” to be acknowledged and overcome, with an additional note of how much it reminded me of the crush-versus-actual-love-interest dynamic in Card Captor Sakura).

Every time Reina and Kumiko’s bond is spotlighted – not constantly, given the structural concerns, but not unlike the solo Reina fights so hard for – it becomes a love song within a larger piece. Not just because of emotional bonding, or even the physical attraction Kumiko voices during the festival, but because it encapsulates the philosophy of playing as an ensemble in miniature. Kumiko’s relationship with Shuichi is about individual struggle, the prerequisite for relating to others and building something new – you can’t play together if you don’t know your own part, after all. But Reina and Kumiko play duets, a process that involves struggling both separately and to find the overtone that’s made when instruments come together.

And of course, there is Reina’s desire to be “special,” the motivation that goes on to inspire Kumiko. As much as Reina is unusual, special, the soloist, at the end of the day “specialness” relies on others. Even if it’s a small, chosen audience, there still have to be onlookers who notice that you’re different or better than the rest. Reina is originally granted a solo by Taki, but she keeps it and cements her place by proving herself in front of the band as a whole. She shines through. Tying structure into interpersonal bonds once more, she might be chasing the idol from her childhood, but she finds someone to share specialness with in Kumiko. It’s continually tied in with the future and who they’ll become – if nothing else, it kicks Class S to the curb as far as cementing the bond as eternal.

While conjecture has flown fast and thick since the finale of SE ended, there are two particular wrenches that must be discussed: the novels on which the series is based, and the upcoming sequel series and film. The original four novels saw Shuichi and Kumiko become a couple, and while the anime has certainly already adjusted itself in terms of favoring Kumiko and Reina’s relationship (that momentous handholding scene that ends the series, for example, involved Shuichi in the novels), that’s no guarantee that either cold feet or creator insistence won’t eventually force the series back into reasserting the firmly heterosexual romance over even the ill-defined intensity that defines the current state of Kumiko and Reina’s bond.

It seems almost inevitable that further hemming and hawing is the best that can be hoped for from future installments. Certainly, while Kumiko and Reina’s relationship is strongly tinged with romance and forms the beating heart of the single available season, enough that the series could only build from distinguishing itself as a separate story in adaptation, nothing is set safely in stone.

Though oddly, even the original author, Ayano Takeda, describes it as such. “Before Kumiko met [Reina], [Shuichi] may have been her special guy, but now her relationship with Reina is eternal.” And just before that, series director Naoko Yamada chimes in that “From [Kumiko’s] point of view, she sees Reina somewhat sensually.” That tension of slightly off-matched mentality between author and adaptation might prove interesting in future media as the series follows its own pet themes and points of emphasis. And while it might be foolish to expect from KyoAni (though with knowledge of the original work, it feels unusually like the creative team is trying to imply a romance within the bounds of their adaptational guidelines rather than simply trying to make a quick buck from merchandise), and from a source material unwilling to back things up…I can’t seem to stop holding out hope.