Ladies in the spotlight. The painful, painful spotlight.

After a brief stopover in the present – Bronx is there to protect Elisa (and Owen, I guess, I mean since he’s there), but that doesn’t stop Demona from halving the time on Goliath and co.’s explosive packs; and Macbeth shows up to bring an end to their long history – we plunge back into our long visit to historic Scotland. The year is 1057, time enough for Duncan’s son Canmore to grow up and make good on his pledge of revenge. It was also enough time for him to marshal a huge chunk of English troops behind him, marking one more sterling occasion of the Brits being totally awesome to the Scots.

Macbeth’s forces are holding for the moment, thanks in large part to Demona and her gargoyle troops (her forces seem to have grown quite a bit, and given that we don’t see any other obviously female gargoyles I’m left to wonder if they’re mostly her children), but it’s definitely a war of attrition. And then along comes Gruoch’s father Boite, who has this great idea that since the English troops are just there on a crusade against the gargoyles, all Macbeth has to do is denounce his allies and Canmore’s allies will desert him. Macbeth takes a minute to consider this advice, effectively shooting himself in the foot. Because guess who was listening outside the window.

And you know what? I haven’t brought him up much over the last few recaps, but Boite is the worst. The spineless, slimy, bottom-feeding worst. He allows his daughter to be a bargaining chip to whoever’s in power to keep himself out of trouble, consistently gives Macbeth the worst advice up to and including this scene, has no scruples or loyalty to speak of as much as he claims to be doing things for his family, and can’t even be rankled to offer a hand to his teenage daughter that time Demona has to save her and Macbeth from falling to their deaths. He’s like Polonius with an arguably higher body count, and so much of this backstory could’ve been solved by kicking this guy out onto the moors.

Okay, sidebar over. Of course Demona decides to abandon the castle with her gargoyles, and it’s hard not to be on her side this time. Loyalty is the single most important thing to her, something that continues to be true even after she’s corrupted by the centuries. And while she seemed genuinely fond of Macbeth, her life is one long series of waiting for the other shoe to drop. We can say “ah, but Macbeth wouldn’t have done it,” but last time she banked on a human protecting her kind they all ended up as so much powder. So yeah, she leaves. And Macbeth’s castle winds up overwhelmd by Canmore’s forces.

Macbeth and Gruoch beat a tactical retreat only to run into Canmore and Demona, at which point Macbeth suffers a pretty fatal seeming sword to the internal organs. Canmore goes off to smug, having also spent some time killing every other gargoyle offscreen; Macbeth’s son Lulach arrives just in time to be crowned king, and only Gruoch stays behind to mourn. They were…just gonna leave the king’s body to decompose out there, I guess? Or they have amazing plot senses, because both Demona and Macbeth get up not long after. Demona goes off to look for surviving gargoyles, and Macbeth is forced into hiding, since the people probably wouldn’t be super onboard with a zombie king. Which effectively means going off to hunt Demona, since he can’t die until she does.

Returning to the present, Macbeth and Demona’s scrap starts taking chunks out of the castle architecture, and though Goliath realizes something’s up in time for him and Xanatos to save their respective statues from harm’s way, the countdown timer is still locked – and only Demona knows the code. And the scene that follows might be my single favorite moment in the entire series. The Weird Sisters reappear and talk Macbeth down from killing Demona, reminding him of how little vengeance has solved (at which point we also learn that his son was also killed by Canmore), and put him into a long sleep. Then they confront Demona with her own actions, and how they contributed to all of the bloodshed that fuels her rage. And for once, just once, it gets through. Demona, centuries-old tears streaming down her face, lets go of her hatred long enough to give up the access code: ALONE. 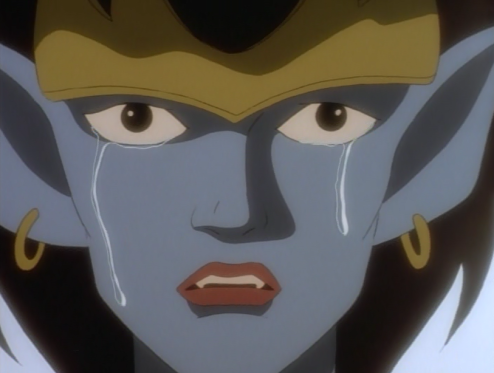 Just leave me here with my villain-loving pain

The fact that she rejects her revelation yet again when she wakes from the vision is just one more bitter gut punch, but the sisters put her to sleep as well, and vanish to parts unknown with their two charges. We’ll definitely be seeing them again, as those three are the tip of the iceberg that serves as one of the show’s biggest mythological underpinnings.

Once the code is entered the rest of the plan goes off without a hitch, and the spell over the city is broken. Goliath and Xanatos even share a moment, archly commenting on how the other can be “useful” from time to time while sharing a smile born of fighting with instead of against one another for a change. Baby steps, children. 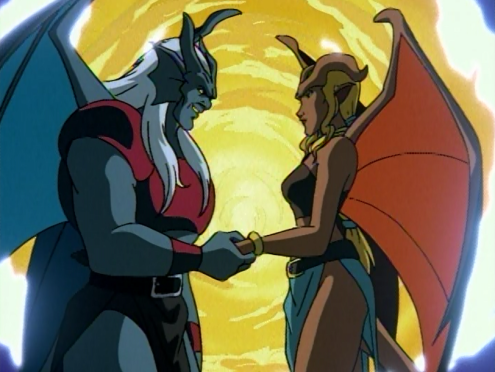 A compelling union of Jerk and Bland

Perhaps sensing, across time and space, my frustrations with Gruoch in the last multiparter, the show has delivered unto us an Elisa episode! She’s been working the night shift lately, and after stopping in to say hello to the gang (Hudson and Broadway are helping each other read the newspaper, a recurring thread that’s never not adorable; while Lex is trying to get Coldstone working again without success) she’s planning to head home to take a long nap.

Or she was, until she sees a naggingly familiar redheaded cop walk by. She follows after, powered by Cop Instinct™. Sure enough, the cop and her prisoner have taken the stairway up to the clock tower, and they’re ready for Elisa when she gets there with a good knock to the head. Our perpetrators? Demona, who you’ll recall has been “cursed” to take human form during the day, and Macbeth.

While the main gargoyles are safe thanks to Macbeth’s code of honor, they do make off with Coldstone’s inert body. In a super futurey jet that no one notices hovering around the clock tower. My guess is that the power of two Shakespeare references in one place has reality warping properties. They retreat back to Macbeth’s house and use a disk to reboot Coldstone, which shows up inside his headspace as a portal. Of the three gargoyles hanging out in there, it’s Iago who goes for it without hesitation. Desdemona and our Othello, meanwhile, are content to let him go and keep hanging out in their scentless, tasteless, fictional honeymoon dimension. So it’s Iago who wakes up, more than happy to seek out some bloodshed.

The middle chunk of the episode is mostly given over to the gargoyles exploring Macbeth’s manor, which has some beautifully atmospheric set design and a few rather tense moments. Brooklyn gets some facepalm points for looking into a storage room without checking the person-sized cabinet on the far wall but by and large it goes well, and the gang is able to take down Demona and Macbeth and free an apparently helpless Coldstone. Naturally, this is the point at which Coldstone scoops up his allies, lifts off a few feet, and treats our heroes to a dose of electrified flooring.

Meanwhile, Othello-Coldstone is trying to load off any responsibility for this, and apparently Desdemona isn’t willing to just go do something about it herself. So that’s safely tucked away as a resolution.

Meanwhile-while in the bit that matters, Elisa is getting pretty concerned about her missing friends. And right on time with the rising sun, Demona shows up to issue a challenge: she’ll bring the captured gargoyles to Central Park to prove a point about humanity, and Elisa has the choice of showing up and dying or flaking and proving her disloyalty. Demona imparts all this in her human form while doing….pinup poses? And it is super bizarre. I mean, she’s a very attractively designed character (you never see enough female warriors with visibly defined muscles, and wowza that gun show), but I can’t really see much of a reason for it in character. It seems pretty unlikely that she’s trying to seduce Elisa, and she hates humans and doesn’t see any appeal in them anyway beyond this form’s use. So it ends up seeming like a cheesecake moment in a show pretty good about avoiding them.

The best part of this is that, for just a moment, Elisa considers just going to sleep. Waking up to no more monsters or magical dangers. It’s a wonderfully humanizing moment, and a tired device (intended) played quite cleverly. The “desire to be normal” lament of many a protagonist has a far higher hit than miss ratio, because it tends to come on early while the magic (literal or metaphorical) of the fantastical setting is still fresh for the audience. More often than not it feels deployed as a device to get the character to leave so that they can heroically return during the third act. Here though, not only have we had a full season and change of magical wonders and a fair share of horrors, but we’ve seen this take a toll on Elisa. She’s exhausted and probably nursing some bruised ribs at this point, and yet her moment of doubt is still a very private one. She’s not really considering it even as she says it, and because of that her yearning for respite is easy to root for.

Of course she goes, and Demona challenges her to a fight (hand to hand, at Macbeth’s goading). And in human form Elisa curbstomps her. It’s kind of awesome. This is all treading water while Coldstone-interior decides what to do, and is eventually pushed into action by a trio of Desdemonas with very familiar hair colors (oh, and I guess she gives some encouraging words about the Gargoyle Way too. Huzzah). They meet Iago in the vortex, and Othello (I’ll just stick with that, since that’s the reference and what he’s often referred to in the scripts) is able to take control long enough to force Demona and Macbeth to retreat. He goes off yet again to find himself, and Elisa finally gets her nap.

But wait! There’s more! If you wondering where on earth the Weird Sisters went before taking their charges for ice cream and setting them loose, the truth is that they were there all along. They put a spell on our two archenemies to compel them to work together; moreover, kidnapping Goliath and co. was just a front to obfuscate the theft of the Grimorum, the Eye of Odin, and the Phoenix Gate. And with those items in hand, to be used for some ominous and unnamed battle ahead, the sisters vanish into the ether.