Remember when the news broke out that we very nearly had an anime prequel to Mad Max: Fury Road? And then remember that other time we all deeply regretted clamoring for supplemental material about Furiosa and the wives, because there was that eye-gougingly horrendous comic that came out? And we were all left feeling simultaneously angry and sad, but then we watched one of the best action films of the past several decades and felt better again? It’s amazing how such a spectacular film can have such difficulty when it comes to other people trying to throw in their interpretation.

Now, one can argue that Fury Road’s success is largely down to the decades George Miller had to think about it, meaning he only returned to his series when he felt he truly had something to say and thus poured all of his energy into presenting a deeply realized world with minimal exposition and a mountain of unremarked upon worldbuilding. And the fact that it’s so deeply felt and personal a project might mean that we’re forever doomed to have lousy Mad Max material (by which I sort of mean Furiosa, much as I loved Tom Hardy’s performance) if it comes from anyone other than Miller’s hand. But just for the sake of argument, consider with me: a Mad Max miniseries as made by Sayo Yamamoto.

Bona fides first. By far Yamamoto’s most famous work is 2012’s The Woman Called Fujiko Mine (I rather liked it, I don’t know if you noticed), but she’s also done guest directing work on shows like Samurai Champloo, Space Dandy, Gunslinger Girl, and Eureka Seven, with additional storyboard contribution to big names like Death Note, Attack on Titan (she designed that first end credits sequence), and Evangelion 2.0. And perhaps most importantly, her debut as a series director was 2008’s Michiko & Hatchin – a visually striking road trip that sneakily set its focus on the relationships between women while pretending to frame things through male characters.

Yamamoto, as I believe I’ve said to absolute death a time or two before, is one of anime’s most promising up and coming auteurs. Even with only two full series under her belt her work is sharp and easily distinguished, and connections between Michiko & Hatchin and Fujiko Mine have already begun to show hints of pet themes (a hallmark of any auteur, and their curse; there are X number of works to be had before you hit the height of saturation and must either retire, go in a totally different direction for at least a film or two, or become self-parody – see Hayao Miyazaki, Wes Craven, and Tim Burton respectively): sex as a weapon, women in control of their sexuality and sexual encounters, the demystification of nudity, a bit of a lurking background fascination with queerness (which I hope will blossom and mature in works to come), children abandoned by parents, hypermasculinity as empty performance, road trips as a central narrative device, and so on. 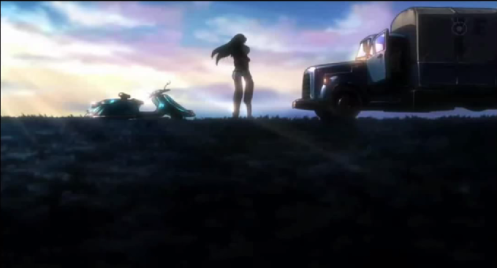 I expect you see where I’m going with these similarities. There’s no point in remaking Fury Road, but there’s more than enough thematic resonance to be had between this director and the ideas found in that film to say “wow, wouldn’t it be incredible to put them together?” And it would be an excellent stretch of skills as far as Yamamoto’s existing work too: perhaps as a reaction to the moe trend/general sexual passivity found in many of anime’s depictions of women, her work nearly always features female characters for whom sex is a consciously chosen and controlled part of their characters; given how sex is either of minimal importance or used to commodify human beings as of Fury Road (and particularly with a character like Furiosa, whose warmth and protectiveness toward other female characters discards the Bitchy Exceptional Chick stereotype and whose total disinterest in mourning traditional femininity raises her above the “woman playacting as a man/waiting for a man” bit of narrative nastiness – and who is also a character totally divorced from any particular sexuality).

it would be interesting to see Yamamoto’s feminist storytelling grow to include that bit more of varied female presentation. And given that both of Yamamoto’s full series have a fascination with cultures outside Japan while still retaining a not-quite-describable feel of a Japanese director, there would be room to grow there as well in a story where society has completely broken down (but is still colored by the ideas and remnants of the societal structure that came before).

Likewise, characters like the wives would be an excellent opportunity to discard the lens of focusing on male characters altogether – something in the wake of the Citadel’s recapturing perhaps, or a small look into The Dag and Cheedo’s relationship. Or, one could move away from the main focus of the film entirely, and take a look into what the Green Place was like in more idyllic times, during its slow decline, or what life might have been like for the remaining travelers before they were reunited with Furiosa. A full-on apocalypse narrative, with a visual designer from MadHouse or Watanabe’s stable to make the colors pop and the remaining human life feel vibrant against the slowly sickening landscape, could be a breathtaking sight. Yamamoto’s already an experienced hand with setpiece action as well (the roller coaster shootout in Fujiko Mine’s finale or the stalking highway assassin in Michiko & Hatchin), so both interpersonal conflict and hard action could stand represented.

Is all of this a pipe dream? Oh, without a doubt. Yamamoto seems to have taken after mentor Shinichiro Watanabe in terms of pacing her series directorial work, and while Fury Road didn’t do dreadfully at the Japanese box office (about $12 million, converted) that’s not even a sliver of the imaginations it captured worldwide. But I’m more enchanted with the idea – that a director whose work I deeply admire might both get the chance to work on another prestigious project (another, because Lupin III is quite the household name in Japan) that also manages to earn more than cult acclaim. And because I want her work to flourish and grow, and to be challenged by new thematic dimensions and character archetypes rather than settling into variations on the same old story over and over again. And, of course, because if we’re going to get a Mad Max anime I’d rather not have to bash my head into a wall at the idea of Furiosa becoming a second fiddle love interest (I love you anime, but boy do you have a lousy track record about that kind of thing).