The Consulting Analyst – An Introduction to Gargoyles 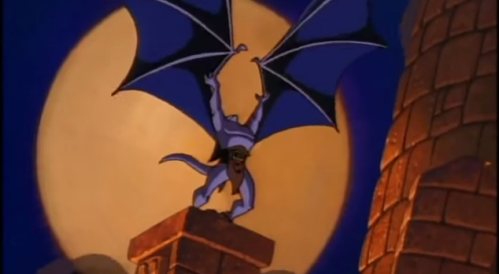 It’s 1994: the variety show is having its last great hurrah with Animaniacs, people have stopped sleeping just in case Mulder is right and aliens are going to kill them in their sleep, dinosaurs are making millions of dollars, and one the greatest animated shows of the 90s is about to make its debut on television. It wasn’t the first two do Dark and Mature Narrative Content on “kid’s TV” (that crown goes, most certainly, to Batman the Animated Series starting in 1992), but it was unique at providing semi-serialized narratives (or at least hard and fast continuity) and long-term character arcs at a time when even the most well crafted and beautiful series stuck to episodic frameworks. And that’s before we even touch the quality of the content itself. But perhaps I’m getting ahead of myself. This is Gargoyles.

The story, as related in the show’s (abridged) prologue, goes like this: a thousand years before the story proper, a clan of Gargoyle warriors protected a castle set along the coast of Scottland. On the eve of a great battle they were betrayed, and the few gargoyles who survived the massacre were cursed to remain stone “until their castle rises above the sky.” In 1994, a billionaire named David Xanatos acquired those statues, and moved the parapets of their castle to the top of a skyscraper in New York, breaking the curse on a technicality. While initially grateful, the gargoyles (led by Keith David as Goliath) soon realize that Xanatos is a cutthroat and selfish man, and align themselves instead with NYC cop Elisa Maza, pledging to protect their new island home. 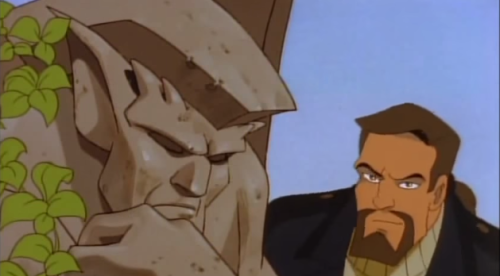 Gargoyles ran for 65 episodes from 1994 to 1996, telling rich tales full of love, betrayal, only occasionally cringeworthy “hip kids today” jokes, half the cast of Star Trek The Next Generation, and lots and lots of Shakespeare references. There was a brief third season pseudo-spinoff, but frankly it was terrible and didn’t even get a video release, so we’re going to be ignoring it. Say, speaking of home releases, that brings me to part of the reason (apart from pure, unadulterated love) that this series is getting: aside of the Region 1 DVDs (which is where yours truly will be pulling screencaps etc) there is not currently a legal way to get hold of the series. Yeah, that’s right. This critically acclaimed series was Gravity Falls almost two decades before Gravity Falls had even been imagined to be the company’s undersold whipping child. 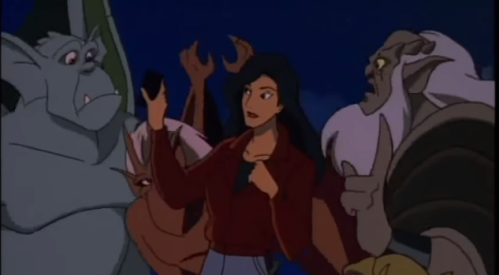 No, no, it’s true! Not on Amazon or Netflix or Google Play or even Disney’s own official website. In fact, while some blog posts point to Disney’s Youtube channel uploading the series in full a year or two ago, my best internet sleuthing can only turn up a copy of theme song on their official channel. And while I am very happy to update things in the event somebody else discovers online digital recourse, for the moment things are looking like my links to you readers will be relying on the kindness of Youtubers like we’re all still living in 2006.

And about those DVDs? Well, the first two sets are really nice. The first one was released in 2004, on the ten year anniversary of the series, with the show’s “first season.” A nice dustjacket box came out in 2005, containing the first half of season two (that’s 39 episodes of 65 episodes released, for those keeping track at home).The third DVD set, containing the remaining 26 episodes, has a release date of 2014. There’s a bit of quibbling – the Wikipedia says 2013, and I do remember a probably nicer version around then that quickly stopped being available, so I’m going by the print on my copy. 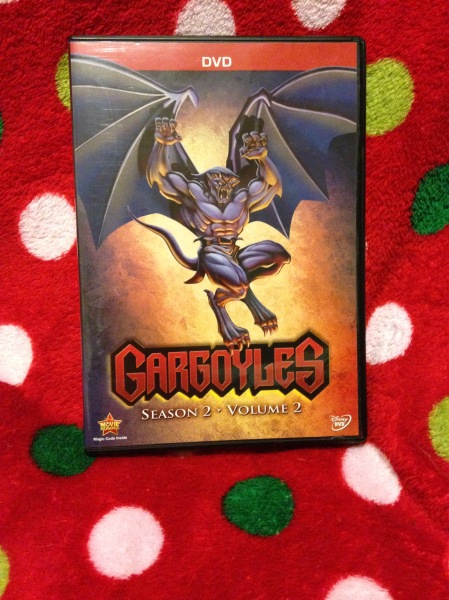 But wait, that’s more! Behold the interior of this long-awaited set. I’ve included my imagined greeting from the Disney execs, so that we can all enjoy the feeling together.

Yup, that’s about where we’re at. And if Disney is content to slowly sink into pretending this great show never existed, then I see that as my call to pick up the torch.

Now, because of its length and the scope of its design, this series is going to necessitate a slightly looser approach than my usual Consulting Analysts. In truth, it’ll likely be slightly closer to my Steven Universe recaps – lots of analysis into the meat of each episode as well as ongoing character arcs, but without the hard and fast segments. That’s not to say we won’t be doing a lot of checking up on the Xanatos estate or having a Shakespeare and Mythology Fact Corner, but I’ll let them crop up on their own rather than giving you the header every time.

That ALSO means that this series is friendly to new and curious fans of the series. While the show does have a few great twists it isn’t particularly built on a twist, and so each of these recaps will take the facts of what we know at the time and pretend not to have foresight of what’s to come (outside, perhaps, of some very oblique hintery). It’s something of an experiment, let’s say.

Alright, I’d say that covers the very basics. Once a month this series will go on break to take a look at the interim Consulting Analyst series, but otherwise we’re looking at solid Fridays for the next year and change. Let’s have fun!

If you want to get ahead of me, you can find the first season here.