The Beginner’s Guide to Rick & Morty

A borderline sociopathic old man drags his grandson from dimension to dimension, supposedly as an assistant but more often just for the company, and simultaneously exposes the kid to an endless parade of mind-scarring horrors. Or more simply, “wow, the whole mad-scientist-and-kid-protégé gimmick is pretty screwed up, isn’t it?” That’s more or less the premise of Rick & Morty (which originally grew out of a pretty X-Rated flash animation parodying Doc Brown and Marty McFly), an Adult Swim title that already has a cult following to rival The Venture Bros. and the critical praise to match. While it’s definitely not a show for everyone (I could give a list of content warnings the length of my arm), it is undeniably well made with a deceptively affectionate touch in regards to its characters.

The show, co-created by Community’s Dan Harmon and animator Justin Roiland (whom you may also know as Lemongrab and Blendin Blandin), aired its first season (ten episodes and the pilot) back in 2013, and will be kicking off another ten episode season on July 26th (there was a leak, but let’s try not to be part of the problem, shall we?). What’s more, I’m going to be recapping that second season right here. But don’t worry if you missed out on the original airing. You can currently see the whole first season on Adult Swim (which is region-free) and Hulu. And if you’re on the fence still? Don’t worry, I’ve got your back. Also, there will be spoilers. That’s kind of the point.

The plot goes like this: mad scientist Rick Sanchez is constantly snatching his grandson Morty out of his day to day life to play assistant on adventures that range from cross-galaxy and universe travel via Rick’s portal gun to an experimental amusement park built inside a homeless man. Rather than being enchanting and wondrous, each episode leaves Morty just a little more scarred – and the struggle of whether to refuse to accompany Rick at the risk of losing one of his only meaningful relationships is a constant strain on Morty.

Most of the season one episodes are episodic in nature with world-building aspects sprinkled throughout – in other words, you get a self-contained adventure along with a character or concept that may inform/appear in future episodes. Watching them in order isn’t critically important, but does help create a clearer picture of where things might be going. Here are the basic summaries of the first season:

Pilot: Rick takes Morty to collect a certain seed for an experiment, only to get stopped trying to take said seeds through interdimensional customs.

Lawnmower Dog: Rick uses an inception-device to try and convince Morty’s math teacher to give him an A (so that Rick can keep taking the kid out of school); Morty’s dog Snuffles becomes super smart after Rick builds it a helmet to keep it from peeing in the house

Anatomy Park: Rick shrinks Morty down to check on his amusement park pet project (housed in a homeless man); Jerry’s parents come over with their new lover for an awkward Christmas dinner.

Night Shaym-Aliens: Aliens trap Rick (and Jerry, collaterally) in a super-realistic simulation in an attempt to trick Rick into giving away the formula for a certain scientific compound.

Meeseeks and Destroy: Morty insists he get the chance to plan an adventure for a change; Rick gives the family a box that creates a creature designed solely to solve a simple problem and then cease existing. Trigger warning for sexual assault.

Rick Potion #9: Morty begs Rick to make him a love potion to use on his crush Jessica, which winds up getting spread to the whole school. Things get worse.

Raising Gazorpazorp: Summer goes with Rick to a planet where females have become the ruling, segregated gender; Morty buys an alien sex robot and ends up having to raise his fast-growing half alien son (or, the kind of teeth-gritting gender roles episode saved by the B plot).

Rixty Minutes: Rick installs interdimensional cable; Beth and Jerry obsess over peeking into the lives of their alternate universe selves.

Something Ricked This Way Comes: Summer gets a job working for the devil at an ironic-cursed-items shop, and Rick immediately decides to screw with the guy by setting up a curse-lifting rival store; Jerry gets flown to Pluto as an advocate for its status as a planet

Close Rick-Counters of the Rick Kind: The Big Lore Episode. Rick is put on trial by the Council of Ricks for a spree of Rick-icides across the multiverse.

Ricksy Business: Rick and Summer throw a weekend rager while Morty debates giving up on Rick for good; Jerry and Beth take a vacation to a Titanic reenactment cruise. Trigger warning for sexual assault.

Aside from the individual adventures, here are a some basic concepts that carry through the first season (and probably into the second):

Part of what sets R&M apart, particularly from other concept-heavy sci-fi shows, is in how much weight and importance is placed in the cast. Even when Rick takes Morty hopping across dimensions or the devil opens a Twilight Zone-esque shop down the street, the important thing will always be how it affects the characters and their relationships. With that in mind, here’s a quick rundown of the major players: 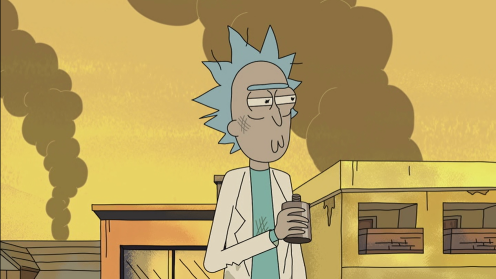 A brilliant scientist with a passing-at-best relationship to empathy, Rick has been all over the multiverse and buried himself more than once. Many things about Rick are unclear, including his age (60s? Maybe?), how much he gives a damn about his grandson (word from the creators terms him “someone who cares trying to pretend like he doesn’t”), and what his goals are beyond the nebulous concept of “doing science” and avoiding the Council of Ricks. Well, “stay wasted enough to not think about that looming existential crisis” is probably in there too.

The series starts nearly one year after Rick reappears in his daughter’s life (after walking out on her mother some decades before), and while he’s nicer to Beth than just about anyone else in the universe, at least part of his reason for coming back involved getting to hang out with Morty. It’s not as sappy as you’re thinking (or if it is, Rick would never admit it) – Rick has a lot of enemies out in the universe, y’see, and Morty’s….”Morty” brainwaves almost perfectly cancel out Rick’s genius ones, thus keeping the scientist off of some very powerful radars.

By the end of season one Rick seems to have warmed up to his family in spite of himself: Summer is almost as involved in Rick’s adventures as Morty despite not having the latter’s pragmatic advantages, and Rick’s even shown something of a protective streak – although granted, mainly in the vein of “you hurt someone under my jurisdiction, so you should hurt more than them.” At least it’s a start.

Oh, and if you’re wondering about the last name…good luck. So far the show runners have dodged pretty much every inquiry about Rick’s ethnicity, and headcanons are the best we’ve got right now (I’m pulling for latinx Rick, for the record). 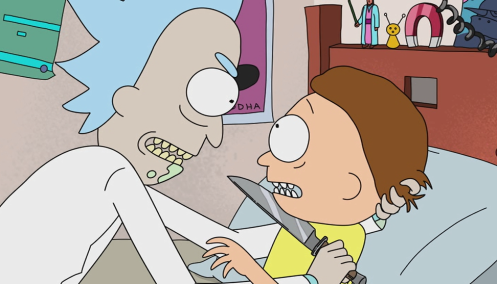 Rick’s grandson, age 14. Morty is a nervous, eager to please kid who usually gets steamrolled into helping Rick out, and who’s spent barely a dozen hours actually attending school since his grandpa came into his life. Morty’s interests are pretty tied to puberty (and particularly his classmate Jessica), which has gotten him into trouble more than once – it’s also the reason he has an already-adult half-alien son (who wrote a very scathing book about Morty’s parenting skills).

Having seen more than any 14 year old should ever have to, and buried his own corpse, Morty’s character arc through the first season is one long downslide into trauma – something Rick would be in no shape to talk him through even if he was inclined to. Though pushed almost to the point of giving up on Rick entirely, Morty ultimately found himself unable to abandon his grandpa after finding out that Rick’s catchphrase, “Wubba Lubba Dub Dub,” is in fact an alien phrase meaning “I am in great pain, please help me.”

While he seems to have embraced the pointlessness of dwelling on lost opportunities and remains haunted by what he’s seen, Morty thusfar remains protective of his family and noticeably affected by the horror and death going on around him. Whether that will stay true remains to be seen.

Morty’s older sister, age 17. Originally written as “the disinterested teenager on her phone,” Summer came into her own near the end of the first season. Far more willing to call Rick out for his callous behavior than her brother, she’s also proven an increasingly competent hand at adapting to and talking her way out of dangerous situations.

By using Rick’s alternate-reality goggles, Summer discovered that she only exists in a few universes – mostly the ones that involved her parents giving up on their dreams and settling into their accidental life together. While Morty was able to comfort her, this knowledge might end up setting her closer to Rick’s bleak outlook than Morty will ever be. 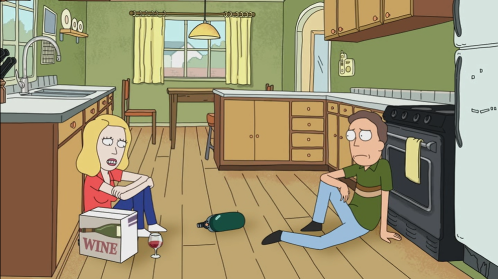 Rick’s daughter, a veterinary surgeon specializing in large animals (or, a horse heart surgeon). Beth got pregnant with Summer in high school and ended up being talked out of getting an abortion by her then-boyfriend Jerry. Bitter and resigned over what might’ve been (particularly the fact that people don’t see her as the “real” surgeon she might’ve been if she’d gone to school longer and gone on to work with human patients), Beth usually has a glass of wine on hand and one foot out the door in regards to her mediocre marriage.

Rather than resenting Rick for abandoning her, Beth instead came to idolize him and exceptionalism generally, and resented her mother for driving Rick away. She’s overjoyed to have her dad back in her life, and desperate enough to keep him there that she turns a blind eye to the danger Rick puts her children in – better that than letting them be normal.

Beth’s husband, with a job in advertising and a perpetual losing streak. While something of a petty jerk, Jerry is also painfully aware that he married a woman way, way smarter than him with whom he maintains a tenuous at best relationship. Though he resents Rick for the hell he puts the family through, Jerry doesn’t push the matter out of fear of losing his wife.

During the Council of Ricks fiasco, Jerry bonded with “Doofus Rick” (aka Rick J19ζ7), the dumbest Rick on the Citadel (which still makes him smart enough to make instant brownies from chemical compounds). When Rick’s name was cleared, Jerry was more than willing to try offing “their” Rick for a chance at getting Doofus Rick (really his only friend) to stick around (for the record, the plan was a complete nonstarter).

Some things that are neither here nor there (being announced mostly in interviews, conventions, or bonus material) that I happen to find endlessly fascinating. 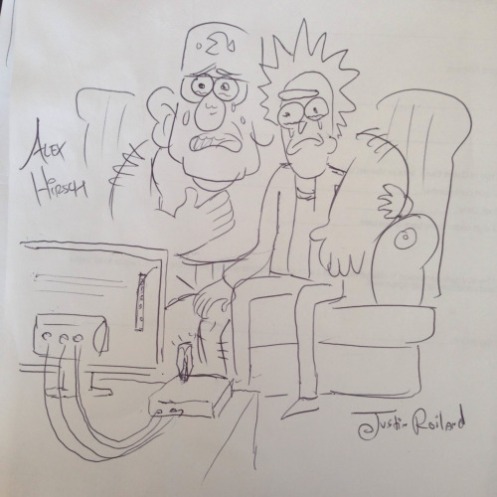 Got all that? Ready to plunge in and give it a shot? Then I’ll see you on the other side.

Tagged as: Animation, Rick and Morty

Leave a Reply to Josei Next Door Cancel reply