Released a mere year after Homecoming’s severe critical lashing, Shattered Memories was working from a pretty notable deficit of fan enthusiasm. Perhaps partly because of this, many of the decisions surrounding the game’s identity and presentation feel reactionary, tied to the knowledge of its existence in a franchise that by then had firmly entered the headspace of being called “once prestigious.” Its awareness of its audience is constant, from the major marketing hook of “the game plays you as much as you play it” on down. And while on the surface level this ends up being a bit groan-worthy (the NPC changes are largely cosmetic and the psych evaluation is pretty simplistic fortune cookie stuff), it manages to sneak its way into being the Smart Meta Entry in the series.

A quick plot summary: the game splits time between first-person therapy sequences that scream This is Not a Twist in Dr. Michael “that drug-pushing dickbag side mission” Kaufmann’s office and a 3rd person POV retelling of the events of the first Silent Hill (novelist Harry Mason gets in a car crash, runs out into Silent Hill to find his daughter) that turns sour and odd very quickly. And as you might suspect there’s no way to talk about this game without knowledge of its ending, so you can do a Let’s Play catch up here.

Cheryl and James and Harry and Mary and Grief

Now, as I said there’s a lot of basic level symbolism going on in this game. The use of the snow as an indicator of the memories that Cheryl has “frozen” or forcibly forgotten, the fact that the only recurring monsters are called “Raw Shocks” (a double pun both for the psychiatric test and the fact that they show up whenever “Harry” touches on a particularly painful buried memory), and most of Kaufmann’s interstitials in general (“hey, relationships! I bet this theme won’t come up in the very next Harry segment!”).

And while the use of the Raw Shocks as an indicator of Cheryl’s mind being triggered makes a lovely bit of sense from a narrative perspective, it all but shreds the sense of tension that’s absolutely critical to a horror game. The “monsters at any minute OH GOD” terror is replaced with “it’s now the designated fumble around blindly looking for the exit to the segment while chewing your controller with rage as you realize you’ve gotten turned around and been dogpiled again WHEN CAN I GET BACK TO THE PLOT.” And while there are some genuinely haunting images throughout (special shout out to the skewered corpse in the deserted cabin and the child-in-peril audio recordings) the survival drive is gone. But then, every Western SH game has its quirks, and Shattered Memories generally has a leg up over its compatriots in terms of having the most competently-executed story.

Part of that comes down to how the well the twist is executed – fittingly enough, as two fractured mirrors drawing closer and reflecting each other. We see Harry’s devotion to finding his daughter first as an emotion unto itself (though not truly alone, but we’ll come back to that), and then to recontextualize those feelings through the initial realization that “Harry” is a misremembered construct created by Heather (whose debatable solidity is ultimately the only hint of anything really supernatural going on here) and then again by way of the various endings.

It even, bless its hardworking heart, reveals a core understanding of what made the reveal and various endings in Silent Hill 2 work so well: it’s not about what happened, but how the protagonist copes with the trauma of that event; not about the dead loved one per say but how the protagonist has allowed themselves to interact with the memory of them. And while tying that in to the psych profiles might be corny (since how we act in a game is often separate from how we would act in real life, and goes out the window completely if you go in again for completion’s sake), as far as a reflection of Cheryl’s memories the behavior tracking works like a charm. Even elements like the shifting NPC behaviors matter less in regard to Harry and more to how Cheryl thinks they should’ve reacted to him (a sexualized versus harsh Cybil, a Dahlia who is closer or farther from a relatable age/appearance to Cheryl, so on).

Just as Harry’s actions are informed by the knowledge of Cheryl’s grief, the plot of the game becomes quite a bit richer with a little context. The SH fandom is, as I believe I’ve said before, notoriously unpleasable. Every game that isn’t a Team Silent game is the worst and most offensive piece of stinking offal to be spat out at the feet of gamerkind, and every Team Silent game that isn’t SH2 is just a slow downhill slide of “terrible until the next more terrible thing comes along” (unless you are feeling contrarian, in which case one of the medium’s greatest works is “slow and boring with shit gameplay”). This is why the Western games each have a unique flavor of cannibalizing the franchise in their own way, all of them not quite hitting on what made the franchise popular or (in some cases) what fans thought they wanted.

Shattered Memories plays its surface of being a soulless remake well, aping the setup of the very first game with a few bells and whistles (the idea of navigating the infamous occult town by way of Wiimote will never not be funny) and a timeframe update to the interface (Harry’s smartphone). But its “psych evaluation” masks the fact that the game as a whole is an exploration of toxic nostalgia. If the Raw Shocks are any indication, Cheryl has progressed to a stage where any questioning of her encompassing delusions about her father cause her to freeze up entirely, unable to interact with or process the real world until she’s escaped that fact. Nor can she move forward, as every reminder of time passing forward without Harry is an invitation to start that cycle of escape all over again. She’s trapped in a limbo of memory, just the same as the franchise has been: every attempt at something new is both savaged by memories of the old but also flawed from the start in its unwillingness to observe what’s “true” about those memories (i.e. what the bits worth carrying forward are – see weaknesses such as Homecoming’s heavy, broken combat or Downpour’s uninspired monster design) in favor of their own warped perceptions of what the franchise “should” be (just as Harry goes searching for his “little girl” despite running into various indications that his Cheryl has started growing up).

The various permutations of the memory world even skip through the phases of post-Team Silent: new characters who seem to have ingratiated themselves in the lives and worlds of old, familiar places; arbitrarily “sexier” versions of existing characters that serve no purpose beyond the fact that the POV for that run has nudity on the brain, or aesthetic changes trying to modernize certain moments despite how ever-so-slightly uncanny it feels when put against any sort of logic. Not to mention the endless, repetitive patterns of searching old places, freezing, running, and beginning over again with the same dogged and unlearning determination (because Konami is Konami and doesn’t know how to business properly).

But it’s not painted so simply as “the past is terrible, quit your whining.” While it’s true that Cheryl’s delusions about Harry have frozen her in time, they’re also an integral part of who she’s become – the sense of mourning is real when she confronts him in the office, and the fact that the best ending embraces his memory while acknowledging its inability to return is a lesson for both sides of our metatextual metaphor (it’s worth noting as well that this game was rebuilt twice as a spinoff and new IP respectively before settling into the “reimagining” mold at Konami’s strong behest, a fact that adds yet more intriguing color to the final product).

The touching, bittersweet finale reads as a swan song for these original characters and the fans’ cry to see them one last time, a well-swung emotional pendulum that outweighs the design hiccups and frustrating non-combat segments. Never would there have been a more graceful time to bow out of the franchise, its dignity not exactly whole but honored in a way that finally, if nothing else, understood the strong bond that had kept Silent Hill fans coming back even as their disillusioned cynicism grew wild and free. Plus, it had the best UFO ending outside of that gorgeous original trilogy. 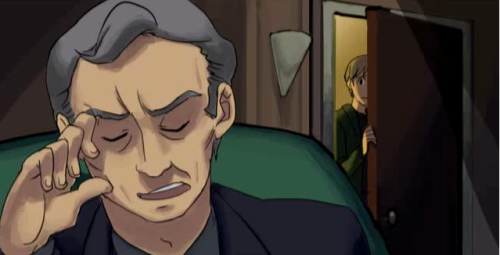 It therefore pains me to tell you there are three more posts to this series.