Sex is Not a Dirty Word: or, Why The Woman Called Fujiko Mine is a Great Feminist Anime

The Woman Called Fujiko Mine is both the most nudity-heavy and one of the most thoughtfully feminist anime I have ever seen. It is a damn well made piece of art from one of the most promising up and coming directors in anime, and I’ve documented my love for it fairly extensively in the past (it plays, indeed, no small part in this blog’s creation). But all that perhaps intimidating gushing aside, it occurs to me that I’ve never really written about the show with a prospective rather than an informed viewer in mind. And while a truly in-depth discussion of the show basically requires discussion of the ending and spoilers generally, I think I can still paint a picture for curious-but-nervous viewers as to why this show is well worth your investment.

A quick summary: Fujiko is a thief, a seductress, and a woman of many mysteries. On one job she crosses paths with famed gentleman thief Arsene Lupin III, setting off a chain of events involving an underground drug cult; strange, spying figures with owl heads, long buried memories, and the men who will one day become her partners in crime. But who is Fujiko Mine…and just who is telling this story, anyhow?

There is a lot of nudity in TWCFM – at least one scene per episode shows us the protagonist nude, sometimes in scenes that seem included purely to have some onscreen boobs. It turns a lot of people off, to the point where a fair number of (predominantly male, by my count) reviewers as the show was airing actually criticized it for having too much female nudity, for being cheap or exploitative of its lead. That’s for each individual viewer to decide at the end of the day, but let’s remember that context is everything: the POV, tone, and framing of sexuality can bring it wildly different meaning upon inspection even if it looks problematic on the surface.

The one of the thorniest issues in examining portrayals of female sexuality is how the scene is portrayed, as enunciated quite well in this comic. A Strong Female Character wearing a brass bustier and blowing things up is not inherently feminist any more than a shy ingénue is anti-feminist, and puzzling out where the lines are is all in how much power the character is given in the scene: are they aware of their own sexuality or choosing to exercise it in the given situation, is the camera objectifying regardless of whether the scene is explicitly intimate (the difference, in other words, between focusing on a woman’s breasts because she’s consciously drawing attention to them and, say, having a warrior splattered with goo in battle and framing it to look like a cum shot), does the character have dimension outside of their sexuality, etc. Hazy stuff in the abstract, I know, so let’s go through some examples.

The moments of greatest focus on Fujiko’s body – i.e. when the camera pans across her or focuses in in what would be considered a typically male-gazey way – are largely centered in the first couple of episodes. The first as an establishing character moment for Lupin, since being compromised by his lust is often what gives Fujiko the upper hand on him. The second is when Fujiko has been explicitly accused of being a seductress and little else, and seems to prove that accusation right (it’s worth noting that her breasts are comically oversized in this scene, noticeably so compared to the rest of the series). This scene is twofold in importance: both because Fujiko is playing on what is expected of her as a woman in the story context (while also proving herself adept as a thief, killer, and manipulator), and because the series itself is using a character with a very long history where indeed eye candy and betrayal were her only points of interest (the amount to which this was true varying based on author). By addressing that perspective in the show’s pilot, the script can then move beyond it. Both the scenes of Fujiko acting as a harem dancer and as a stripper (in the second episode) were explicit cases of Fujiko performing in order to gain an advantage over her chosen mark – and accordingly, the camera focuses on the places where she herself draws attention (and the costume design goes one step beyond, giving Fujiko a wardrobe that’s fashionable but practical when seduction isn’t her immediate tactic or cover).

These stand-out “cheesecake” scenes are all orchestrated by our lead, and all take care to give her power and agency in how and why she displays her body. In fact, the cinematography goes out of its way to make the viewer uncomfortable in the few moments where Fujiko loses the upper hand or has been exposed against her will: her body is cast in shadow when her clothes are taken in the opening of “.357 Magnum,” while her skin is colored in a pale, almost deathly cast during her most vulnerable point in “Prison of Love.” 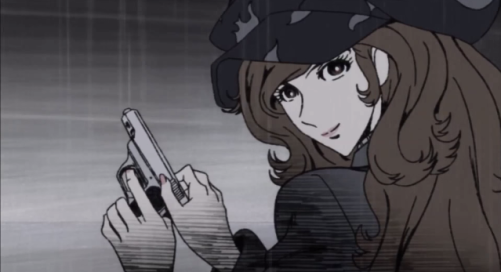 And the longer the show goes on, the more it begins to divorce the concept of nudity from an inherently sexual context. I mentioned above that the show seems to have a “boobs per episode” quota, to the point of seeming like self-parody. But while the early going is dominated by those moments of seduction, later on we simply see Fujiko in mid and wide shots while she happens to have no clothes on, sitting in the bath or sleeping naked, existing as a woman who has the power both to choose when to be sexual and when she simply wishes to exist in her own skin without shame. Even further, the script uses straightlaced samurai Goemon’s crush on Fujiko to question the myth of the “pure” woman and his struggle to reconcile the Nice Young Woman he thought he met with the sexually confident woman he’s later confronted with.

And speaking of sex scenes, the show has (sort of) two. And it takes advantage of both to paint wildly oppositional pictures of male- versus female-focused pleasure: the latter occurs entirely in abstracted silhouette, with writhing shapes that could belong to anyone (including a manga-homage of representing the penis as the male gender symbol) and a deliberately sleazy audio track with overplayed female moans; the latter is backed by a breathy jazz number and focuses entirely on the intimacy/foreplay element, forgoing nudity entirely in favor of hands entwining and soft communication. Both scenes are false in different ways, but each prove their execution to be rooted in both individual context, character desire, and smarter commentary on the part of the director (and if there’s one thing I cannot emphasize enough, it’s how much Sayo Yamamoto’s work bears watching).

One of the primary criticisms of the inclusion of sex in fiction is that it’s done thoughtlessly, or could be excised from the narrative to no great effect, but here is a series that seeks to embrace the roots of its character while also centering her in a story where her sexual confidence would feel justified and necessary. But equally important, the story expends an equal focus in not holding every other female character to the same worldview as Fujiko. The women Fujiko meets cover a range of personality, appearance, and goals (albeit within the limitations of the show being a 1960s period piece), and the show further passes both the Bechdel and Sexy Lamp tests with ease.

Last and most vaguely, given its proximity to those spoilers I was talking about, is the series’ overall focus on narrative. The opening moments tell the viewer that they are watching a story being told, and from there it presses forward in asking increasingly difficult questions. Whose stories do we tell, and how are those stories shaped? How, particularly, are women’s stories overshadowed, shout over, and outright stolen? And how does one go about taking that power back?

Any recommendation of this show comes, by needs, with a certain amount of warning, as it delves into topics of torture, mental illness, and child abuse (though the show earns them all by context and never truly feels gratuitous) alongside its very frank sexuality. But for those who feel up to the material, it is both a gorgeous and unforgettable viewing experience. The show is available on Hulu.

Tagged as: Analysis, Anime, Culture and Such, Lupin III, Sayo Yamamoto, The Woman Called Fujiko Mine