The Consulting Analyst – The Barefoot Girl 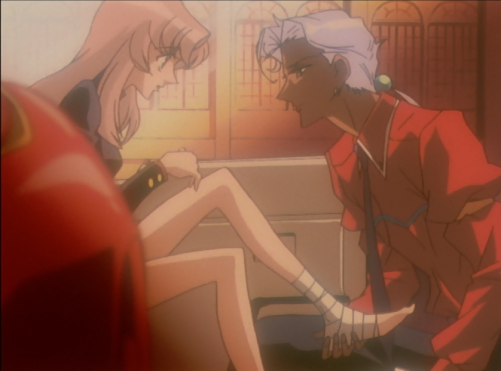 Simultaneously the most high school and the most sinister an episode has been to date. Because this is a universe where adults never so much as thought to give the “stranger danger” talk.

Episode Specifics: Love is in the air. Or rather, intense seduction is oozing down the edges of the screen, as Utena begins to become aware of her growing feelings for Akio and the man himself moves in for the kill. Utena struggles with a guilty conscience, feeling like a traitor to her prince and to Akio’s fiancée, all while Anthy looks on with an inscrutable expression.

While everyone (Utena, the Shadow Girls, Anthy, Kanae, pretty much every character on screen and especially Akio) becomes more inscrutable to us as viewers, Wakaba steps in to take her tried and true (and very, very comforting in this moment) place as the “barometer of normal” in the story. Her opening conversation sets the tone for the episode as a whole, setting a metaphorical lighthouse so that by the end we’re aware of just how far off course things have gone – moreover, just how much power and influence Akio wields. Wakaba’s advice to her fellow student is solid, levelheaded stuff: that a relationship built on lies is one doomed to failure, not to mention a scummy thing to do to another human being (I also like to think of this as an excellent sign of Wakaba’s growth since the Saionji incident). 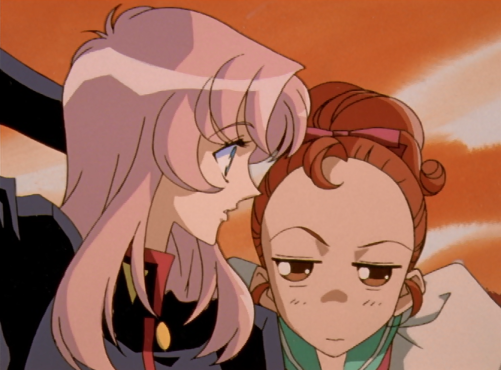 Wakaba side-eyes for us all

But then we turn right around and Wakaba’s talked her way into a date with Akio, a man Utena has told her multiple times is engaged. That would be infidelity, the very definition of a relationship being based on falsehoods. Wakaba justifies this by saying that you can’t help who you fall in love with (and that’s true, something even Anthy admits later in the episode). There are two important things to take from this: one, that while feelings are involuntary actions are not, hence the contrast between Wakaba and Utena throughout (meanwhile, were we to assume Akio is not a horrible person, he still has a burden of saying “no” here and honoring his commitments if they’re important to him); and two, that the truth can be hidden and manipulated by phrase and perspective (by illusion, in other words). Both things will be vital knowledge when Utena needs to overcome Akio and his influence.

Creator Commentary: I decided to live true to myself.

“Living true to yourself” means “living as an alien.”

Even the alien craft we call UFOs sometimes lose control and crash into things.

I’m not talking about the Shadow Girls here. 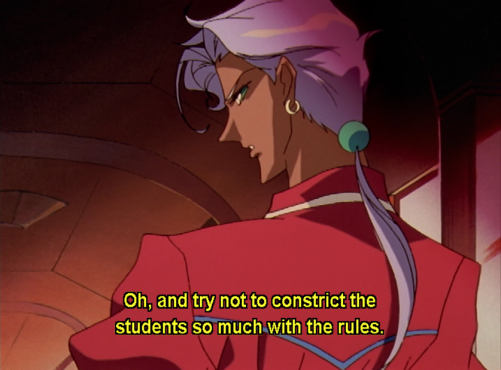 Have some class as you shape their every thought and action, fer fuck’s sake

Character Spotlight: Let’s check in with our barefoot girl – it’s been quite a while, after all. Since we met her, Utena’s come a long way in attempting to empathize with her fellow duelists (or at least not jump to judgment immediately), and her desire to connect with others (and particularly Anthy) is evolving into a true desire to understand them better rather than to prop herself up by “saving” them. She’s started to build a bit of an identity for herself. So it’s only natural that this arc is about testing that identity.

For all the duels that Utena’s fought up to now, she’s mostly been able to stand as the comfortable outsider, a kind of wall for challenging duelists to throw themselves against without having to challenge the veracity of her own position. The only two where this wasn’t true were Wakaba’s, where Utena was faced by the idea that her friends kept things hidden from her (or that she herself might be causing them pain); and Mikage, where Utena had an outright violent reaction to even the suggestion that her memories might be untrustworthy or outright untrue (which we know to be the case). Those are core doubts in Utena’s character, and both have to be broken down and challenged before she can come close to graduating.

Her anguish over her crush is part awkward teenage love, but it’s more than that as well. If she falls in love with Akio, she’s doing something she knows to be “wrong” in alignment with her beliefs, and is a goal which would harm others in the name of her own happiness. Utena’s always struggled with viewing life as a binary: in other words, that a person who does a bad thing is bad person and vice versa. So if she is feeling these “bad” feelings, is she not only being disloyal to her prince but becoming the antithesis of what she worked for? She’s a bit of a Javert, this kid.

And deeper than that, it seems she feels disloyal to Anthy as well (I am particularly fond of the image of the two moons, one hiding in the shadow of the more prominent one, as Anthy and Utena discuss whether one can help who they fall in love with). A great many shots this episode are spent on Utena observing Akio and Anthy with a pained expression and some kind of motion toward her chest, nodding to a whole complicated mix of feelings, attractions, and loyalties that a child falling in love for the first time is in no way ready to handle.

As for the bare feet imagery, we have a mix of the cover of fealty (kissing the foot of a ruler denoting ultimate loyalty and self-abasement) with the removal of guards and protections (Akio doesn’t actually kiss her foot, you’ll notice – he assumes the trappings of it as a means of getting her shoe off and getting her to rely on him). It’s a loaded metaphor for the emotional game Akio’s playing this episode, and it’s only going to get worse.

(Oh, and don’t think I’ve forgotten about the cake. We’re putting that discussion aside until the tea conversation. You know the one). 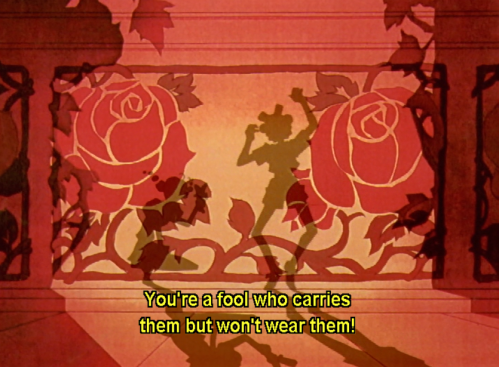 The original Evolution of Dance

Have You Heard: Dance until you die or don’t dance at all. Love someone to the ruination of your life or wall yourself off, swearing love off forever. People tend to go to extremes in the hopes of not getting hurt, believing all the while that that’s the only thing they could’ve chosen (it’s a rigged game in this case, of course – the shoes are cursed and Akio is pulling the strings). But the real challenge is in finding middle ground and partnership, something Utena and Anthy are struggling with even now.

The meaning of the UFO crashing into the tower finally gets a bit of spelling out in the creator commentary. The duels this arc all deal with hitting walls, thinking you’ve overcome the problems you had at the start only to succumb to issues you hadn’t truly worked out after all – and in this case, because the tower is the item associated with a certain chairman, because an outside force deliberately placed itself in your path. 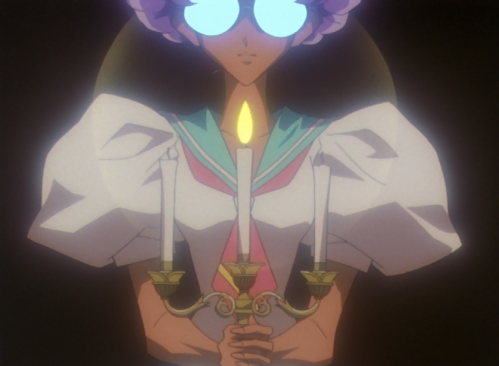 Those shadows sure do look conspicuously not at all like tears, don’t they?

Anthy Watch: Never have those glasses been so shiny. It’s hard to pin Anthy’s feelings in this episode, and the glasses mark that as a deliberate move on the writers’ parts. On the one hand, she delivers Utena right into her brother’s hands knowing full well the game Akio is playing (and that Utena will lose), and her voice almost drips with disdain as she says goodbye. But then, no one was around to save her from Akio either – we might imagine a potent cocktail of fear of her brother’s retribution, anger at Utena for not being “better” than Akio’s game (and hurt at Utena’s obvious romantic feelings for her brother the second he shows attention, despite their own deepening friendship), and even a desire to see someone else dragged into her own suffering (to prove, perhaps, that she is not uniquely a failure at having been trapped).

Largely her role this episode is to play the observer, lurking at the edges of scenes and bearing that ominous candelabra (more on that in a second). Her inconstant physical state is one of the clearest indications yet of the separation between her real form and the one she projects on campus, both able to observe everything but almost completely unable to act on what she sees. On the flip side, she could’ve physically stopped Utena from getting into Akio’s car but couldn’t stop her from falling for him; helplessness at every turn. One wouldn’t wonder at the bitterness that would build up after thousands of cycles of that. 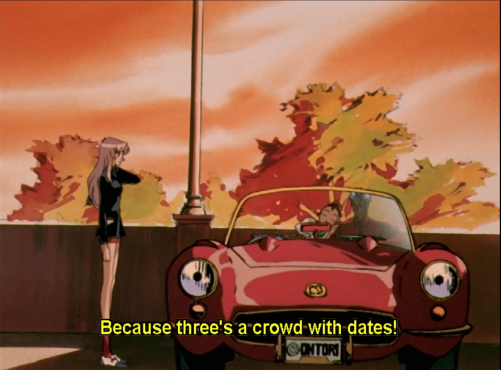 I see Wakaba has not yet discovered OT3s

Themes: Speaking of Akio and Anthy (and Utena), this is an episode all about threes: the arches are always framed in terms of threes, with the third always a mere sliver on the screen; the three candles, the three car rides, characters talking in groups of three, and so on. In other words, the pain of last week was just a warmup for the real love triangle episode. The color composition is in top form too, painting Akio and Utena’s scenes uniformly in sunset oranges and reds as both a sign of the story coming to a close (“setting”) and of Akio’s overwhelming influence on Utena and the school as a whole (red being both a symbol of power and his signature color).

Now, that candelabra. It’s the centerpiece of the whole damn episode, and there’s a number of ways we can read it. First off, it can stand for Utena herself: we have Anthy as the holder (the observer or judge of the duelist), the flames being tested by the wind of Akio’s seductions, and a flame going out each time one of Utena’s defenses or objections is worn down and she falls a bit more into her feelings. Alternately, we can take it as our three players in this love triangle: the first flame goes out when Utena can’t bring herself to confide in Anthy, instead choosing to ride in Akio’s car; the second goes out during the kiss, as Anthy appears to observe it; the last as Utena sits alone and makes her decision. And there is, of course, the pure power play of it: Akio cuts off first Utena’s support from her friends, plants seeds of doubt in her with the kiss (leaving him to stand alone as that tall central candle), and it flares and goes out (the game is over) when he gets what he wants – Utena falling in love with him. How about those Ikuhara anime, huh?