Alright, so the game design is a dodgy thing (breakable weapons were possibly the worst thing they could’ve proudly carried on from SH4, and there is a healthy scattering of glitches foreshadowing what is later to come); and the plot is functional fanfiction at best, with a fairly dodgy characterization of Lisa in particular. But I wasn’t kidding about Travis. Or the Shakespeare.

SH0’s plot stands as a prequel to the first game. Like SH protagonist Harry Mason, trucker Travis Grady nearly runs over a young girl on the highway. Unlike Harry Mason, Travis doesn’t especially have any reason to follow after her but does so nonetheless. This leads him to the burning Gillespie house, where the Silent Hill cult has just begun the immolation step of their new world order plot. Travis carries Alessa out of the building, passes out (something he spends a lot of time doing), and wakes up within the haunted town proper. Trying to find out what happened to the girl, and later doing an unwitting fetch quest for her, leads Travis on a greatest hits tour of Silent Hill faces and the demons of his own past – which just so happen to mirror Alessa’s. You can watch a pretty good Let’s Play of it here. 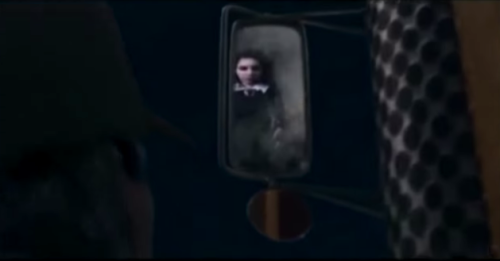 Travis’ crippling lack of self preservation skills aside, this is a neat shot

Mirrors, of course, are one of the game’s unique particularities: unlike other SH protagonists, Travis can shift back and forth between the normal and nightmare versions of the town by touching mirrors. This is arguably a poor choice in game design, since powerlessness is a pretty key turning point of terror, but from a story perspective it’s downright fascinating. Almost everything about Travis that works revolves around how he relates to Alessa (and for someone who’s more or less a stroke of random chance there are an awful lot of similarities): they’re both viewed as “unnatural” kids (a statement that stems at least partly from their dissociation during traumatic events – Travis during his father’s death, Alessa withdrawing as a tormented child), they both have mothers who see them as vessels for otherworldly power and inflict near death experiences upon them (as related through scribbled childlike art), they both have arguably “split” identities (Cheryl/Alessa and Travis/Butcher), and so on. The major difference is that Travis survived through means of repression, while Alessa used the dormant powers of Silent Hill to become a vengeful force (there’s also the nice touch of having most of the Alessa-generated monsters in SH have to do with images of physical decay, while the monsters Travis faces are alternately dehumanized sacks of flesh or tied with restraint or sanitarium imagery).

So of course it makes a certain amount of sense for Alessa to gravitate toward Travis, convenience aside. Of course the game is constantly forcing Travis to look into mirrors, both to “face himself” (ugh) and to highlight the reflected nature of our two main characters. Of course he has power over both worlds because he can touch the pieces of the Flauros, and once Alessa is no longer bound by that device she too will be able to urge the town into its reality transitions. And last, of course we have a binary ending for Travis, just as there was for Alessa’s fate in the original game: one where he’s metaphorically born anew (literally, in Alessa’s case), and one where his repression proves to be murderous after all, and he’s as much a monster as Alessa became.

Did someone get the number of that sledgehammer?

Shakespeare in the Hills

There’s a pretty lengthy patch in the middle of the game that sees Travis running around a local theater. Given that unlike the previous or following area this has pretty much nothing to do with his family history, we have to look to some sort of thematic justification. The notes for this section mostly center around that “splitting of self” concept I talked about before, making sure we have a very fancy explanation for what happened in that game we played that one time, as well as several quotes from The Tempest. Now, Shakespeare is nice for making a production look legit, and Tempest is the most spectacle heavy show as written (which makes for a good opportunity to play around with staging and level design in theory), but why choose it and not, say, Macbeth or Richard III (the latter of which could do wonders as a Dahlia analogue)?

That’d be down to Caliban, I imagine. For those unawares, Tempest focuses on an exiled Duke who lands on a mystical island with his young daughter and basically proceeds to take it over long before the story proper happens (the story proper involving the people who exiled him getting shipwrecked on the island many years later). Caliban was the child of the witch (Sycorax) who originally ruled the island, whom Prospero took on as a slave after killing Sycorax. And the play has its own form of doubling in this regard, with Prospero also being served by Ariel (a wind spirit who was tormented by Sycorax and thus quite grateful about her death). All this laid out, it comes to a question of where the analogues are..and it’s not as clear cut as one might think.

On the one hand we can read the town of Silent Hill as the island, and Prospero’s colonization habits (which eventually come round and bite him in the ass) as the cult’s attempts to control the town’s power only to set it loose instead. Maybe we read Alessa as Caliban (a child living in the only world they new and one day tormented until they lash out against their tormentor – and we might read Caliban’s attack on Miranda as Alessa lashing out at Lisa in this case) and Travis as Ariel (a wayward soul captured into doing a task, weary and demanding nothing more than his freedom). Or maybe Alessa works as Prospero, thrown from her life thanks to a plotted conspiracy and redeemed only many years later when an outside force (and the innocent voice of a child) convince her to lay down her quest for vengeance. It’s all on the fringes, and yet it manages to be one of the meatier portions of the game for thematic substance. 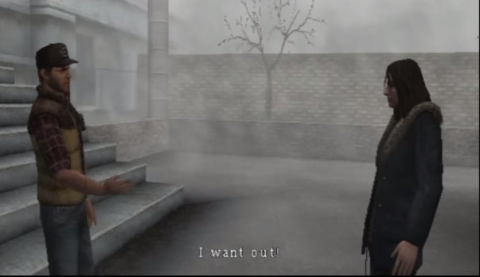 Yeah, well, wait til you see the game your cameo’s in

The Rest is Silence

I thought about making a section for Travis and his mother, but it all seemed to fall into being fairly self-explanatory (Helen suffers a mental breakdown, believes Travis to be possessed by evil, attempts to kill him; his father later commits suicide in despair) or frustratingly lacking in thought (the fuck connection does Helen have to the town that causes her to be affected by the existence of the Otherworld? If its power was only awakened sufficiently to call people to the town after Alessa’s reign of terror, then how was she even affected in the first place, given that Travis’ family isn’t from Silent Hill?). This was also the start of the Schrodinger’s ending, wherein Travis both is and is not a serial killer depending on what ending you get (whereas Heather and James’ actions in the narrative were always the same, and it was their feelings about it and their actions afterward that were affected by play style). Please imagine the occasional screams of anguish every time I would be pleasantly surprised by Travis’ arc throughout the game or a minor touch, only to stumble upon a dozen more choices that had only the most fleeting of thoughts dedicated to them. In fairness to the game, this is because it was basically gutted part way through production and rebuilt almost from the ground with a different tone and narrative. But it never stops feeling like good ideas (it seriously never ceases to amaze me how much I genuinely like Travis) mired in lost opportunities.