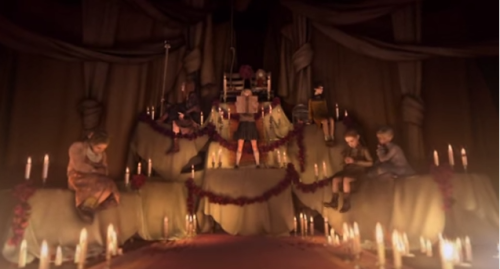 Once upon a time there was an unlucky girl, starring in a very unlucky game called Rule of Rose. It was passed on by several publishers while trying to find homes outside its native country, brewed in a controversy of accused lolicon content that was quite untrue, and sold so few copies as to be one of the rarest PS2 games on the market today. All of which is a shame, because in the moments when the game shines it reminds me of the very best adolescent anguish allegory parades in Utena and the uncanniness of Silent Hill.

Rule of Rose is the kind of game that basically requires a Let’s Play, at least in its current form. Cursed with frustrating and literally broken combat and controls that are often stiff and unwieldy, it’s less likely to be challenging from user error than because of some cruel sadism on the developer’s part. But there have been other games with frustrating controls and great stories that have survived the test of time – Psychonauts is the most famous, its witty writing and memorable characters making up for some truly eye gouging controls and camera issues, so why not RoR?

Cute things in an art game? Can only end well

Let’s back up a few paces. The game’s story goes thusly: 19 year old Jennifer is riding a bus to an unknown destination when a boy runs up to her and hands her a handmade storybook, begging to know what happens next. He then jumps off at the next stop before she can respond, and her attempts to follow him lead her to an eerie orphanage populated with cruel, bag-headed children. After witnessing a ‘burial’ given by the children and falling into the grave, Jennifer wakes to find the orphanage has become an airship, the children are demanding gifts from her to join the “Red Crayon Aristocrat’s Club,” and everything has become a frightful mirror of its former self. It’s quickly evident that we’re visiting a version of Jennifer’s repressed memories James Sunderland-style, each event warped and inflated by a child’s fears and imagination, with only a loyal dog named Brown at our side.

It’s unquestionably an art game, touched on every level by the attempt to portray a warped vision of childhood: the menus as chalk drawings, the crayon storybooks that bookend each chapter, and the fact that the story itself is driven by the logic of a child’s nightmare. Exploration reveals a game world that’s been structured as disparate puzzle pieces meant to be solved, half glimpsed secrets and monsters parsed through a limited understanding that nonetheless paints a picture of the horrors that ‘really’ occurred, all underscored by a beautiful and haunting soundtrack. As an exploration of individual trauma through allegory and abstraction it’s an unmitigated success, its truly disturbing yet hopeful story shining through in spite of its broken gameplay. But even now it struggles to hold even its cult audience, and there’s not so much as a digital release of the game available. So I say again, what happened?

The marketing happened. The story deals with dark themes in a heavily abstracted way, as I mentioned, and that includes sexuality and sexual abuse. It also has two prominent cases of romantic interest between some of the game’s female cast. Somewhere, someone in the marketing team (and I must know who, so I can slap them with something heavy and sharp) decided it would be a good idea to conflate these things, and we ended up with a widely circulated trailer that conflates the two in what no sane individual would deny is a pretty sleazy fashion. Looking at that trailer, it’s very easy to nod your head and say, ‘oh yes, well of course people wanted nothing to do with that game.’ ATLUS’ PR rep proceeded to then not help this at all by giving a non-answer that ‘they hadn’t censored the game at all’ for the US release (giving readers free reign to imagine all sorts of lurid content that bravely escaped the censorship blade) and giving an especially charming one-up in saying that the media’s focus on lesbianism in the game was awesome for the marketing (because queerness in games: we should definitely sell it as a shocking and forbidden thing). The whole thing is one long exercise in uncomfortably mercenary mentalities from the publishers and disappointment for those of us actually familiar with the game’s content (the AV Club was probably the most famous review to point out that 98% of the game’s sexually exploitative reputation was utter nonsense), and I suspect the lingering effects of that reputation have lead us to where we are now – with the game’s almost complete nonexistence outside of those who remember it from its initial release.

I’m not so naïve to think that this game will ever garner a full-on remake. Even with the blow-out success of Persona 4 and its increasing body count of spinoffs, ATLUS remains a fairly niche company – making this a game for a fraction of a fraction of an audience. To imagine it retooled with a less frustrating interface (and perhaps even something along the lines of SH2’s ‘casual’ mode, which discards combat as much as possible in the name of making the game’s experience accessible to all curious gamers) is a pipe dream of the highest order. It’s not a completely abandoned game in its original form, though: the magic internet gaming elves have produced a fairly up-resed emulation, and even looking at the original footage it’s amazing how well the game’s graphics have survived the past decade. An ‘official’ emulation for the PSN or a bare-bones port for Steam isn’t entirely outside the realm of the possible, and it shouldn’t be. We live in an era where old games are remade, rereleased, and revisited on a regular basis, so regular that we’re well past the most famous titles and into a space where the niche and forgotten gems ought to have their time to shine. This game deserves saving as an example of constructing a videogame space as a museum piece, as proof of the vast potential for game objects as vehicles for atypical and symbolic storytelling, and as a beautifully melancholic psychological horror story.

Tagged as: Horror, Make This Happen, Rule of Rose, Videogames