Once upon a time there were only three Silent Hill games, and everything was well (I tell a lie, of course, because the fandom has been utterly implacable since James Sunderland strutted his time upon the stage if not before then). Then Silent Hill 4: The Room was released, a game so markedly different from the previous entries that there’s still a persistent urban legend that it wasn’t intended as a SH game at all. Pretty much from the word go, there was nothing the poor thing could do right: from reasoned gameplay complaints like the frankly inexcusable amount of backtracking or the shoddily implemented limited inventory to histrionics about the story daring to explore new narrative choices, the fandom shredding was immediate and brutal.

It was begrudgingly drawn into the fold of acceptability once there were American SH games to band against, but it’s continued to hold a weird position. Aside of some really dedicated slash shippers it tends to be the ‘oh yeah, that one’ game, occasionally nodded to for its narrative and passed over in favor of raging against the new games or lauding the old ones. I myself have a fondness for it that’s strangled by a fair amount of emotional detachment. (If you’d like to check the game out for yourself, there’s a good Let’s Play here).

Then I realized I might be on to something there.

I. Walls, Metaphorical and Literal

SH4 is pretty quick to scream out its central conceit, so much so that it started that nasty trend of Silent Hill games with subtitles. Literally every single facet of the game comes back to the titular room: the plot, since Walter thinks it’s his mother and Henry can’t leave; the gameplay, since it’s a place of healing for the first half of the game and also the crutch for that damned limited inventory; and thematically, because the elements that define The Room cast their shadow on how the characters relate to the world and one another. 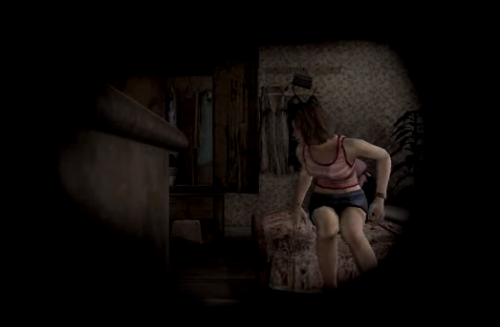 I like that after you do this enough, even the horrible nightmare bunny starts judging you

More than any other game in the series, the characters are never less than one degree separated from each other: the victims-to-be that Henry meets are convinced they are dreaming, thus ‘real’ while Henry and their surroundings are fake; Walter is dead while his victims are alive, and Henry seems to be tormented by ghosts mostly because of his fate to survive until the end of the ritual; characters are constantly communicating across different plains, whether it be Cynthia calling Henry over the loudspeaker, Jasper speaking in code, Richard being glimpsed in an ascending elevator, or Joseph relating the story of the rituals through piecemeal journal entries. Even the residents of the apartment can’t seem to reach each other, their stories filled with missed phone calls and un-received letters. And Henry himself is a photographer, someone who by the nature of his profession is separated from the world (even if only be a lens) long before he became locked in his apartment. 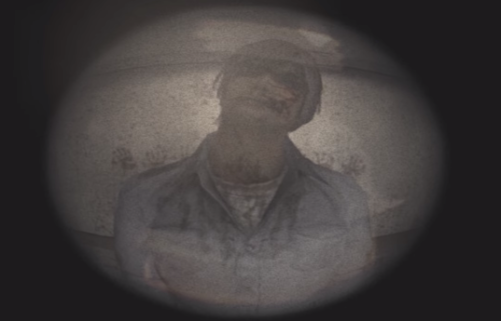 The recurring motif of holes are at first windows (i.e. the peep hole) and the portals to other worlds (with the bathroom portal becoming larger and better defined the more Henry interacts with others). At the same time, the game seems willing to acknowledge these interactions as a two way street. While Henry is at first able to retreat to the apartment as a haven of recovery, the outside world eventually starts making its way in via the hauntings – in other words, entering the world means it will influence you, and not always for the better. And yet, the ultimate solution is with in the apartment as well, turning those frightening tools into a means of digging deep within the home-self and exorcising the problems that were keeping one trapped and isolated (this is why the best ending relies not only on saving Eileen but also purging the demons from the apartment).

II. Self and Other

Silent Hill has, at this point in the franchise, been enamored with the theme of isolation. Being isolated emotionally and physically from loved ones (SH1), isolated from memory and reality (SH2), isolated from self-knowledge and one’s own power (SH3). SH4 has a bit of all of these. Its primary interest seems to be not in reinventing the thematic wheel but in remapping those ideas from the fairly removed titular town (want to avoid the mind numbing terror? Just be more careful about your vacation spots!) and rooting them in the concept of ‘home.’

It’s worth noting that SH4 was released in 2004, when the internet was really entrenching itself in everyday home usage and it was becoming easier than ever to shut oneself away from the world (the “first gen” hikikomori are hypothesized to have started around the 90s, but in the 2000s the concept really exploded into pop culture). And if we’re looking through the lens of willing isolation, we come around to the idea of fear of the outside or (broadly) the Other. 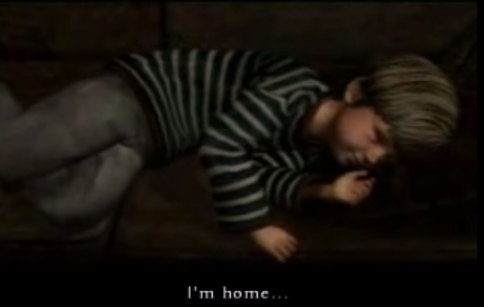 The ‘Other’ is a theory developed by Freud and Lacan and later expounded on in the gender theory of Simone de Beauvoir. It states the idea of a divide between an object, the ‘real’ thing, and the Other which is defined by all the ways it Is Not the object. For Lacan this meant a baby realizing that they and their mother are not the same being, which begins a sort of lifelong longing to return to the state of wholeness we perceive ourselves as having ‘lost.’ For de Beauvoir, it means the ways in which women are not allowed to define themselves as an autonomous group but rather constantly by how they Are Not Men (for good…but more often for ill). You’ll notice that both of those ideas come up rather a lot in SH4 in the dual Walters: the child who wants to be reunited with his mother, and can literally be ‘inside’ her again; and the killer whose actions have a real virgin/whore vibe about them (the killing of Cynthia, that Eileen isn’t attacked until she’s in a more revealing outfit, cutting open a nurse’s womb in the hospital, so on).

But the ‘Other’ spreads to the Receiver of Wisdom as well (the construction of that title is interesting in its passivity, for Henry seems to understand astonishingly little – only Eileen is capable of reading the Otherworld writing, while Joseph gathered the story together, and yet the information of a woman and a ghost are still given over to the ‘true’ object that Walter has constructed for wisdom). One of the most disturbing hauntings is the victim-Henry outside the peephole, showing our protagonist divorced from his future, his suffering (and all emotion, really), and across that living/dead line that Walter crosses. Eileen is much the same, becoming more and more childlike as she grows more possessed, connected to Walter by the blurring of the child/adult line. Bringing it back to Henry’s supposed job, all three characters are given the opportunity to see or experience a photo negative of themselves. 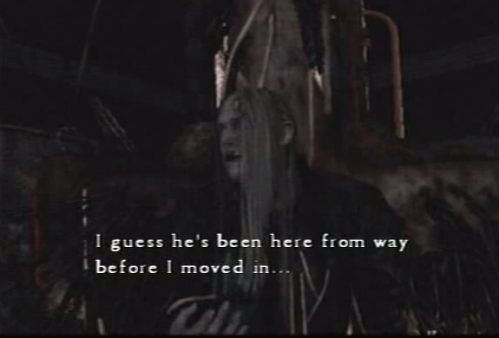 Way to keep the Rosemary’s Baby references going with the
‘secret storage room of horrors,’ SH4

Speaking on matters of perspective, one final thing. Long before I even thought of typing this analysis, someone posited an excellent theory as to how SH4 might be read as a warped viewing into the mind of a killer: Henry Townshend (in short, that Henry is attacked by those malicious ghosts because they are his victims, that things like the raw flesh in the fridge are remainders of his crimes, that his headaches and blackouts are him doing things as “Walter,” and that the endings determine whether Eileen is able to escape and whether Henry breaks down into madness).

It’s a most excellent theory that I’ve admired for years, and it didn’t seem right to end this essay without paying homage to it. Because damn, does it make the game as a whole much, much more interesting. It certainly does Henry some favors, turning bad acting and nonexistent facial features into the characteristic flat affect of a sociopath. Moreover, it gives increased resonance to the idea of digging into the self to find truth and revelation. Henry finding Walter’s corpse within the apartment becomes his realization of his own monstrous nature and ensuing struggle to combat it. His lack of comprehension (of, well, anything) suddenly stems from a refusal to recognize his true nature, the incredibly muted color palette (much more so than any of the other games) outside of the murder scenes pointing to the feeling of being ‘alive’ during the sacrifices as opposed to the constantly looming ghosts, and it’s finally clear why exactly he was so drawn to taking pictures in Silent Hill. Nor does it even make SH4 the redundancy that Homecoming would turn out to be (spoilers). While James’ story was one of grief and anger, Henry’s can become an icy look into a broken mind, pieced together with the player as the Other trying desperately to get back to the source…and when we do, wondering if we might regret what we found.