How Much Canon is Good Enough? Korrasami and Where We Go From Here

I would like to present you now with two circular lines of logic prevalent in the world of western animation, especially shows aimed at younger audiences:

Same sex relationships cannot be too explicit (read: involve kissing or direct love declarations) because this is viewed as inherently tied to sex, which is inappropriate for children’s media. Think of the children.

Close relationships between two characters of the same gender are too vague to be considered explicitly romantic, and so people should not complain when they are read as merely close friendships.

Which brings us round to the events of Friday’s Legend of Korra finale – and if you thought for a single second I was going to miss out on an inclusivity landmark in animation history, you have not been around this blog for long. And yes, it is a landmark: not just a canonical same-sex romance in a children’s TV show (defined here by network demographic, not the wide net that is the actual audience), but the making of a heroine who saved the world, grew as a person, and also happens to be queer. What we’ve got here is the American Samurai Flamenco. I want to write a letter to the past and tell myself this day is coming, just to see what a relief it would be to them. I want a letter from the future to tell me what bold new artistic freedoms will someday come of this important step. But first we have to deal with that catch-22.

Major media outlets have been on the scent of the finale for the past few days, for the most part eager to give the thumbs up to the Very Progressive Thing going on, but there’s been some corresponding pushback as well. On the one hand you have disappointed shippers, who wanted Korra and Mako to get back together or even for Korra to remain single at series end. Occasional extremist conspiracies aside (my favorite is about how the creators were ‘forced’ to make Korra and Asami canon when they really wanted Mako and Korra – don’t you hate when the famously adventurous network executive push you away from the safe, boring choice and toward the unprecedented, risky one?), that’s pretty normal fandom stuff. It just means that Mako/Korra will be the show’s Zuko/Katara.

More insidious are the camps insisting that the finale isn’t trying to indicate that Korra and Asami are a couple at all, and that crazy shippers are reading imaginary subtext into a close female friendship. The No Homo Party, in other words. Let us dismantle that theory.

First of all, there is the assertion sometimes made that in Eastern cultures (from which the show undeniably draws for much of its aesthetic and philosophy) it is not uncommon for platonic female friends to be more affectionate, an argument that I imagine carries over from that loathsome “just a phase” Class-S genre in anime. This is the weakest move of all, by my estimation – LOK’s philosophy of the “middle road” might be eastern, but the show’s approach to societal conventions, character interactions, and gender dynamics has always been Western (take a look at Zhu Li’s instance that she be treated as Varrick’s equal partner as a condition of their romance, rather than treating his proposal simply as a reward moment for her loyalty. This is a subject we can go about on all day).

On the wider subject of ‘this is all platonic affection,’ I now refer to the concept of visual and narrative parallel: a conceit which is often used in works of fiction to equate situations, characters, or types of relationships. LOK is a sibling series to Avatar the Last Airbender, which also ended with its Avatar protagonist finally sharing a quiet moment with his love interest. The staging, lighting, and general mood of that romantic finale is repeated beat for beat in LOK, sans kiss. In fact, many of the story beats of Katara and Aang’s relationship have echoes in the Korra/Asami romance.

But perhaps you are saying, ‘that’s all fine and well, but it was a different series altogether! That doesn’t mean it means the same thing in this new show!’ Alright, let’s look at some of the visual parallels within LOK itself. This show had a plethora of onscreen smooches, to be sure, but I want to draw attention to a persistent little gesture that popped up a lot in the last two seasons. In major moments of emotional turmoil, characters in established romantic pairs will discuss their intent and their plans to share a future together, and then take hands before declaring their love or kissing. It happens so often, to that exact choreography, that it’s hard not to notice it. And then that last two minutes happen, and one understands. But wait! Korra and Asami only discussed how much they meant to each other and planned to go on a private vacation together! They didn’t kiss or say ‘I love you!’ Technically correct. But remember what I said: the show’s heterosexual couples discuss their plans, take hands, and then initiate obliquely romantic gestures. Korra and Asami talk, take hands…and the screen fades to white. We have no idea what they said or did on the other side of that portal. But at least four cases of precedent gives us a pretty strong clue. 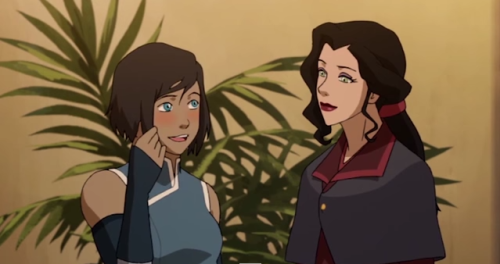 We’d all forgotten the pre-moe days, when blushing actually meant things
Besides a desire to add weirdly sexual shininess to every surface

Then there are those who acknowledge the romance but claim it had no development, often implying if not stating that this was a pandering move. This is simply enough disproven by the multiple scenes given to Asami and Korra’s developing bond over the last two seasons and the building of a beautiful and engaging rapport, the fact that Asami was the only one Korra felt close enough to reach out to during her trauma recovery (and the fact that Asami was willing to fully dedicate herself to caring for Korra after the initial poisoning), or the clear blush Korra was sporting on finally being reunited with Asami (a deliberate animation tell that the show only ever used in cases of romantic attraction). And that’s before we even get into the thematic appropriateness of the two coming together, not only the marriage of benders and non-benders but of technology and spirituality, fighter and negotiator (though each has dabbled in the other). The last book is about finding balance, so of course the final romance was a meeting of two individuals who started out in direct opposition. To say there is no build up is to be willfully ignorant at best and roughly as observant as a mossy rock at worst. All of this, of course is aside of any meta commentary of support for the pairing from cast and crew members.

Meta might be a good jumping off point – meta and subtext are pretty much all that animation fans have had up until this point. Static Shock (somebody bring that show back with more creative freedom, seriously) sidekick Richie’s sexuality never got the chance to leave the writers’ room. Gargoyles’ Lexington wasn’t allowed so much as a crush on a boy until the show moved off of Disney and into a serialized comic. The Young Justice creative team wanted to include diverse orientations in their series and were flatly told no. Adventure Time’s Marceline and Princess Bubblegum have been openly declared exes…but funnily enough, a previously network sanctioned web series got the axe for so much as daring to suggest such a thing a few years prior. And it’s STILL not allowed in the show (though the increasing disregard for subtlety in getting the two back together is kind of a beautiful middle finger to Cartoon Network). This is all, of course, when direct attempts at including queer characters aren’t just censored altogether (including adorable old ladies in love).

When Korra and Asami walk off into their future together, the kneejerk assumption is still disbelief. No way did we just see that. It can’t possibly have happened. But it did (for the record, Korra’s staff has been previously in favor of the pairing, and co-creator Mike Dimartino shared a Vanity article specifically discussing Korra/Asami as a romance on his Facebook page). And all the attempts to explain it away won’t make it less true. So, what now? As the Mary Sue beat me to saying a mere day ago, this series can be a wonderful line in the sand for the new bare minimum. I imagine change will still be slow, at least to an extent. Queer romance has still been tied to the notion of explicit sexuality, and appealing to that makes it easier for conservative voices to shut the conversation down. But the future is already changing, and this needs to be out there. Not just for the kids who experience different lives, viewpoints, and role models through the world of fiction, but for kids who’re already sensing that ‘difference’ in themselves, who need role models themselves. And before you even dare to say ‘but can’t they look up to straight characters,’ stop. Because being queer is not all a person is, but it colors how they see the world, how they are treated, how safe they feel in places ‘normal kids’ wouldn’t even think to worry about. It matters. And a show has finally had the clout, the bravery, and the nuance to pull off that first crucial step. So yeah, think of the children. And let them have some queer cartoons.

ETA: Oh, and by the way? It’s not ambiguous at all. Officially.

Oh, brave new world, that has such people in’t

Tagged as: Animation, Culture and Such, Legend of Korra, LGBT