The Consulting Analyst – The Cowbell of Happiness 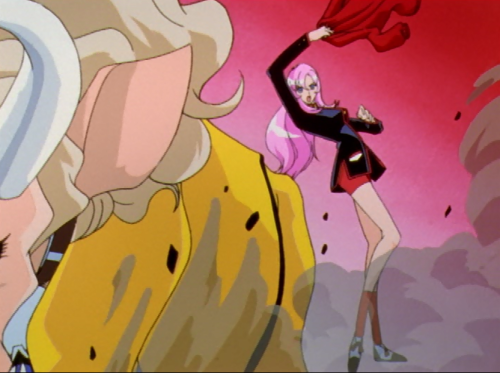 Ikuhara concedes that perhaps there are some commonly used growing-up Aesops he should touch on, but resolves to do it in the weirdest way possible.

Episode Specifics: After being one-upped by Jury’s one-of-a-kind designer jewelry at a party, Nanami receives her own specially created accessory – a cowbell. What follows is essentially the Utena version of “The Emperor’s New Clothes,” if the latter had ended with the Emperor becoming an invisible man (as always, heavy comic relief episodes are a touch leaner than some of their analytic brethren). 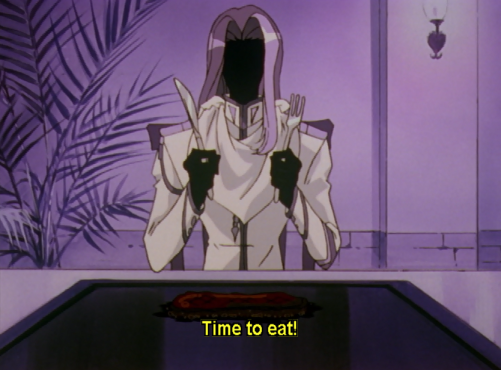 This is an odd week all around: there’s no arena, but there is a duel, and even duel music of a sort. Since Ikuhara himself mentions the episode’s leitmotif, it seems wrong not to linger there a bit. It’s a folk song originally written for Yiddish theater around 1940, lyrically concerning a calf being lead to the slaughter. So, given its origins we might read it as a sacrificial cow (fitting in the context of the dream sequence, since Touga is effectively ‘God’ in Nanami’s worldview), or as a lament on the death of the innocent – or perhaps the ignorant (there being that running gag that Nanami has no idea what she has beyond latching to the idea that exclusive=good, and so her ignorance pushes her to her own fate). In some ways the cow is a perfect animal to represent Nanami – intelligent but wholly, docilely trusting to one person; and easy to steer (ha) once riled up by a perceived offense. And from Touga’s side, cute and useful and even valued, but an acceptable sacrifice in the name of a greater goal.

Creator Commentary: To tell you the truth, I didn’t know the “Dona Dona” song. While we were meeting about the plot, I heard someone on staff say, “This is ‘Dona Dona’ material, huh?”

I found the song and had a listen.

I decided to use it. Two versions of it, in fact.

Bring me a blanket, someone, and soo-o-on… 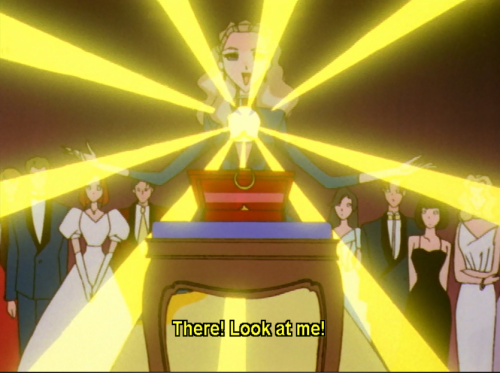 I love when the episode summarizes itself for me

Character Spotlight: Nanami’s got an impressive role to fill in this show. She gets handed the most pedestrian themes (next time’s the puberty episode!) and the brunt of the physical comedy, with an ongoing tie to Anthy that’s pretty much impossible to examine in any depth until the second time around. But her episodes also tend to have the most surprising underpinning of pathos aside of all that bratty posturing. It’s no wonder she’s Ikuhara’s favorite character.

At the moment, her trouble is putting on airs – not just by wearing the cowbell, but by throwing parties (which, now that we’ve seen Touga’s birthday, are pretty much just a mimicry of his), changing her clothes (she wears her dueling outfit to school, just like the ‘real’ student council members, and the dress she has on at the party is almost comically low cut and far too old for her), and trying to take over Touga’s position as head of student council despite lacking experience, knowledge (she doesn’t seem to know about End of the World at all), or the respect of the other council members. She’s trying so hard to fill an image, to prove that she’s special and worthy (of her brother’s love above all), that she’s blocked out any capacity for self-reflection – the very second she does the whole thing might come crashing down around her ears.

If that dream is any indication, Nanami is, at heart, lonely and overwhelmed. We see her shadow as the cow because to an extent that’s more her true self than the ‘idol’ she claims she’s angling to be – her life is almost entirely influenced by others, any illusion of self-determination little more than being nudged from one pasture to the next, and waiting for the day those outside forces decide her fate (even putting Touga aside, to be a school ‘idol’ necessarily means putting one’s entire sense of self in the hands of an outside population. 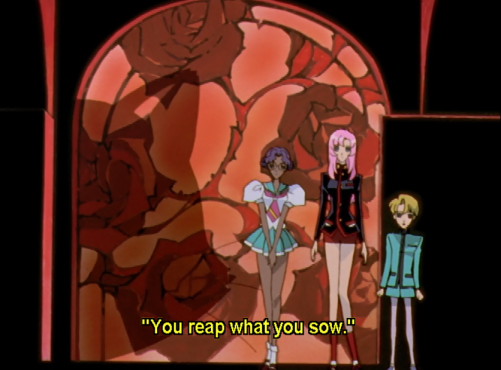 Stop trying to take my job, show. Go back to being inscrutable

Have You Heard: Carrying on this arc’s tradition of NOTICE OUR SYMBOLISM, this week’s shadow play goes ahead and explains itself: “you reap what you sow.” If you wear a cowbell, then you might as well be a cow. If you show no regard for others, you’ll get none in return. And deals forged without trust, making up that fragile beast ‘popularity,’ are destined to crumble. 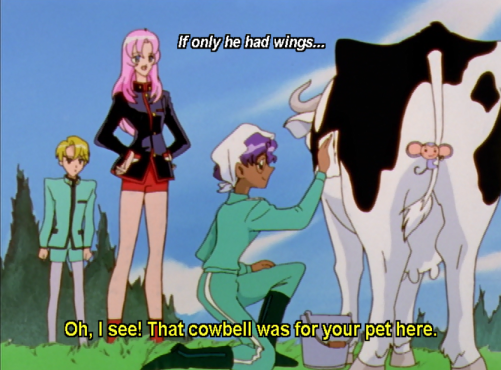 Anthy Watch: Hey, so we haven’t talked about Anthy’s bindi yet. The dot on her forehead is an adornment originating in the Hindu religion, representing the mind chakra. Traditionally it stands for a reverence for great wisdom, or a representation of the third eye. A lot of traditional bindi are red, meaning love and prosperity. Anthy’s doesn’t become so until the film (when she’s already found Utena and is near to escaping Ohtori and her brother’s clutches). For now, though, let’s think of it as yet another sign of her power over the world of Ohtori. After all, Akio himself doesn’t have any power within the duels, and it’s unclear just how much of the school is an illusion originating from Anthy herself, never mind her considerable knowledge of the duelists’ hearts.

I bring it up at this moment because of the Hinduism connection – Dios and Anthy aren’t likely meant to be tied to any religion specifically, but I wouldn’t be surprised if they lived in an area with a great deal of Hindu culture that would’ve influenced them. And as anyone with even the most basic grasp of the religion will tell you, cows are quite sacred (though that’s a more recent thing actually; cows were always symbols of wealth and prosperity, but the sacred angle really came to prominence with Ghandi’s writings in the 19th century).

Now, there’s pretty much no doubt that Anthy sent Nanami that cowbell, and was probably behind its more supernatural effects, too. The question is, why? Partly catharsis, I imagine. There’s something satisfying in taking down someone on their high horse, even when you aren’t completely strangled of voice and agency (and truthfully, Nanami’s not exactly hurt by what happens to her, and it reverses painlessly). The view of cows as sacred comes from their being the highest achievement in the reincarnation cycle, and Gandhi described them as a “poem of pity” – reinforcing that idea that Anthy sees a potential repetition of her own story in Nanami. 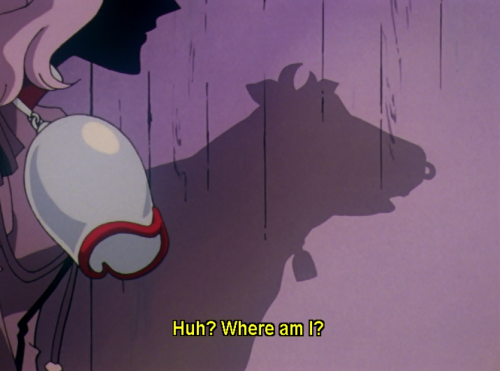 But I think we can read a bit more into the cow thing, too, with at least three possibilities. One, the prosperity angle: Nanami spends a great deal of time boasting about how stylish and privileged she is, and so the greatest ‘gift’ to help her in this manner would be to turn her into the ultimate creature of prosperity. Second, the dream: twin to Anthy’s torment of Nanami are these little moments of attempted clarity – in this case, Nanami dreaming of herself as livestock being slaughtered for her brother’s sake. Prophetic dreams strike me as quite within Anthy’s style, and it’s another little attempt at nudging the girl toward the realization of what will happen to her if she continues living entirely for someone else’s sake. And last, exemption: while she feels foolish and angry when she’s found out, there’s no doubt that Nanami seems a lot, well, happier with that cowbell. She’s outside of the popularity race, not troubled by her brother’s absence, and no longer a duelist.  But it’s a flawed happiness, which perhaps even Anthy comes to realize – escaping doesn’t make the problems of the world go away, nor is it truly an escape if you don’t know yourself (and whether Anthy was attempting to give that escape to Nanami or living it out vicariously is rather debatable, I think). 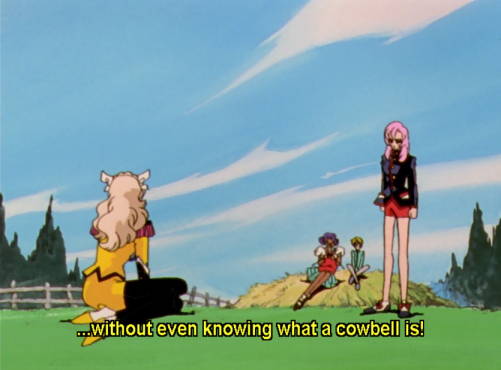 Themes: The trappings of adulthood are a trap. The cowbell is something of a precursor to what Akio will offer in the next arc – the promise of adulthood. In Nanami’s case that’s sophistication and ‘specialness’ (her greatest fear, after all, is that she’s no one special at all), something she’s desperate enough for that she’s willing to take something she doesn’t understand on the grounds that it ‘seems’ grownup. And because she doesn’t understand the context of what she’s doing, it hurts her (as even well meaning, dense as bricks Utena points out).

While not everyone winds up with magic cowbells, this impulse to cultivate a seemingness of adulthood is pretty much universal during adolescence. Whether it’s drinking and drugs or rushing into sexual relationships before one is emotionally prepared for them or pretending to like books and films you don’t really get yet, we’ve all looked for that little something that will give us the one-up on our peers. And sex, alcohol, and pretentious opinions aren’t necessarily bad things for a person to indulge in as adults. The trouble comes out of not understanding those things and their contexts, and more broadly not understanding oneself. As an adult you know your limits (in theory), you have a more developed mind and (theoretically) a sense of empathy to others that leads you to moderation and better understanding. But a child hasn’t had enough time and experience to develop those aspects of themselves, and more often than not they’re driven to extremes chasing yet another illusory goal that might ‘revolutionize the world.’ And hopefully they don’t crash and burn irreparably in the process.

So, y’know, don’t do cowbells kids.