The Consulting Analyst – The Boys of the Black Rose 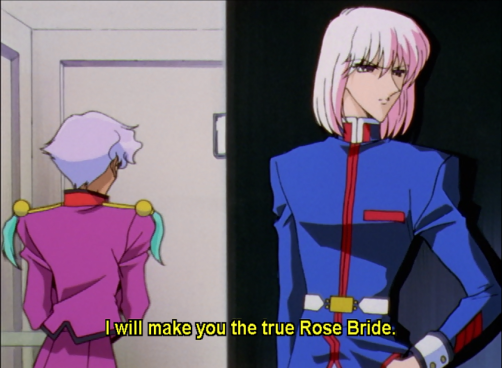 In which we lay down the rules of a new arc, and your analyst is nearly crushed by discussion possibilities. And yes, you saw what you thought you saw.

Episode Specifics: As with all good magical girl shows, the game has changed: Anthy has a brother, there’s a new seminar that has quite the exclusive reputation on campus, and Utena’s challengers no longer seem to be dueling of their own free will.

Almost as if it’s preparing us for the straight up surrealism that is the Apocalypse/Akio Ohtori arc, this season’s going to go out of its way to throw in bits of background symbolism (sometimes with…helpful…arrows attached) and general bits of weirdness: the obvious camera focus on the devolving pinned butterfly as the (trapped) candidates regress to their most primal fears, the inclusion of a significant thematic object cluttering the dueling arena, as well as the victim outlines all over the ground. Call it immersion therapy.

Surrealism: the preemptive answer to ‘where are they getting those uniforms’

While we’re at it, we’ve got a new mix of “Zettai Unmei Mokushiroku” for Utena’s walk up the tower – there’s an insistent downbeat underpinning it (prefiguring the rumbling of Akio’s infamous car), and a strong baritone voice mixed in with what had previously been entirely alto and soprano singers. In other words, even the music is telling us that we’re starting to get an inkling of what’s at the heart of this whole dueling game thing. As for Kanae’s duel music, it’s comparatively simple in relation to the student council’s Long Lists of Stuff lyrics: at the heart of it is the desire to protect an important treasure, despite on some level knowing that treasure is an illusion (just as Kanae acknowledges that Akio is kind to her, not that he loves her).

Creator Commentary: I saw a certain horror movie when I was in middle school. There was a secret mortuary in an underground chamber, and the dead were electronically transmitted (!), still in their coffins, to the “other world,” where they were forced into slavery.

The movie’s story was utterly absurd, but the division of the world into opposite poles of “living” and “dead” felt real to me, somehow.

Our world has been spoken of in bipolar fashion for ages.

In my student days, there was a popular book that compared the “affluent” with the “non-affluent,” and sorted everything into categories called “loaded” and “broke.” It was the bubble era, and the aim of the book was probably to get a laugh by saying “They call us wealthy but our lifestyle’s practically in the trash can!”

But for some reason, I couldn’t laugh.

Years later, the phrase “the winning side” was popular in the media. I thought it was horrid. And sure enough, people started using the opposite phrase “the losing side” as a masochistic joke. I still couldn’t laugh, though.

One day, a girl I saw on TV said, “There are only two types of people in this world: the ones who are chosen and the ones aren’t chosen.”

That gave me a start.

“To not be chosen is to die,” said the girl.

I decided to try my hand at that.

I want desperately to be disturbed, but anime has broken me

Character Spotlight: Poor Kanae. She’s a hell of a start for this arc and its themes of those ‘not chosen’ – unrequited lovers, cast off associates, and collateral damage. Because we all want more than anything to be chosen and accepted, and the popular narrative of the chosen one inevitably leaves a trail of could’ve-beens behind. Her dueling item is a vase of lilies: flowers that represent purity and devotion, but are also the most commonly used flower in funeral services (there’s also a subset called the ‘stargazer lily,’ which is a nice touch). Coupled with their white coloring (the color of death in eastern cultures), it’s obvious the girl’s not long for this world.

I use the word ‘girl’ quite deliberately, for Kanae is the image of adulthood without power (which isn’t really adulthood at all). Every moment of what should be a moment for her to gain the ability to exercise power is undercut in some way: she wears comparatively ‘adult’ clothes (i.e. not the school uniform), but she’s still only 18 and waiting to graduate (but only from classes – she’s a long way from being able to graduate from Ohtori itself); she’s getting married, but she had no choice in her partner (and her affections  seem no more mature than Nanami’s, more theory than fact); her father is stepping down from a major position of power, and she has no knowledge of or seeming interest in it; she wants to be emotionally open, but is easily wounded by Anthy’s passive aggression. Kanae is proof that the trappings of adulthood mean nothing at all. And like Jury, rather than confront her true desires/fears she fixates them on an outside source (Anthy) – in this case, that Akio doesn’t love her and that her father might’ve been poisoned. And that’s the final proof of her child state – someone who can’t face the reality of a situation, whatever the reason, isn’t ready to graduate. 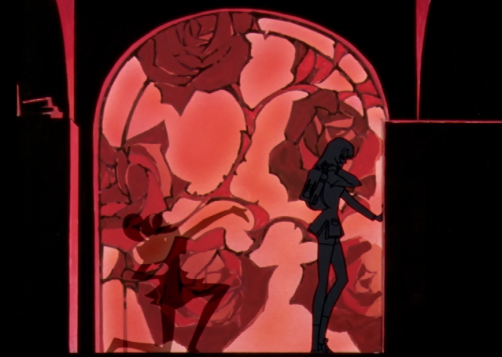 I would hate to see an Ohtori flash mob

Have You Heard: The introduction of our new Shadow Player, and the first time Utena (or anyone, really) interacts with the plays! And in keeping with the ‘just in case you weren’t sure this is all symbolically relevant, let us point it out to you’ tour, this skit is almost a direct response to Wakaba lamenting that nothing exciting ever happens.

So, a wisdom tooth. A natural part of growing up, and not necessarily a bad one even, but unless handled properly it can cause some serious pain and damage (IT’S LIKE LIFE, DO YOU GET IT). It’s a mark of Utena’s growth as a character that she knows the answer already, however far she might have to go in terms of applying it to her own problems – if something is causing you pain, confront it (also-also doing the work of making her a foil to Kanae). 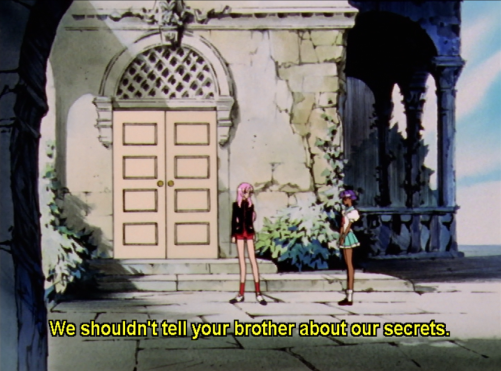 Anthy Watch: It’s tough to say where Anthy’s work toward the dueling game ends and her true feelings begin here, even more than usual. Kanae has to feel alienated to be driven to duel, and Anthy’s in the know enough that she could hardly be swayed by a belief that someone is coming ‘between’ her and her brother. It’s more likely she’s somewhere between pity (if Kanae is driven to duel then she’s doing her part, and if she’s driven away then she’s saved from a cruel fate, with Anthy able to claim she’s following the plan) and resentment (at seeing someone so blindly walking into their trap without an ounce of ambition or cleverness).

More than ever this episode we’re drawn to look at her impassive face, its mask-like quality highlighted by both the art and the characters around her. And, in those final seconds, it’s not hard to see why (of course, we aren’t sure at this point that she’s being coerced, but hell).

Themes: This arc is all about binaries: living and dead, chosen and rejected, child and adult, and the general erasure of grey zones (which is, of course, where our protagonist is fighting to live). For the moment, let’s take a look at that child/adult issue. With the teachers of Ohtori little more than paper dolls designed to move the various duelists into position, and even quasi-authority figures like Mikage revealed as mere high school students, the plot is definitely setting Ohtori up as a playground for its singular adult: Akio. 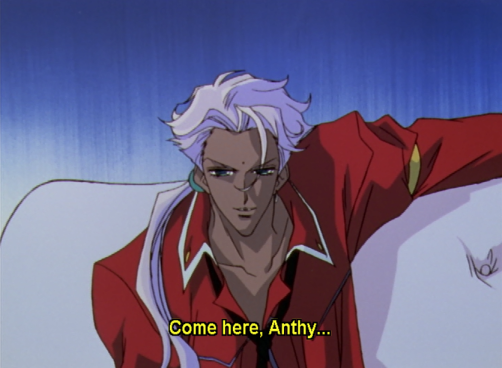 I have no snark. Only horror-shame

And what is an adult? Power, in this case wielded for personal gain and seduction of others. And wowza – whether Akio can be called ‘sexy’ is down to the tastes of the individual viewer (if I were to pretend I was above the appeal of two dimensional line drawings I’d reveal myself a liar), but I wouldn’t hesitate to say that he has the most sex appeal of just about any anime character. Which still a squirmy thing to define, but let’s give it a shot: his design is markedly adult, even compared to our previous chessmaster Touga, lending him an air of towering physical presence and authority (meaning he’s impossible to ignore); he uses open and beckoning body language, but is also almost always sitting, downplaying his height when he’s in close quarters with one of his marks (and he’s casual but choosy with his physical intimacy, adding emotional weight to the moment; his dialogue walks a fine line between praising his conversation partner and holding the upper hand of knowledge and experience – so the listener feels valued but also strives to earn further approval; his presence is almost always sought out – he’s easy to find but distant enough to be missed, and this has the double effect of making any visit on his part doubly momentous; and aesthetically, the dude clearly knows he’s attractive while giving the illusion of not caring overmuch – confident but not showy, teasing but not revealing, from his clear but soft spoken voice to the slightly open shirt and messy ponytail. It’s no wonder every last student he approaches, even Utena, falls in his wake. I point this out partly because it’s a relative rarity (it’s far more common to find characters who are meant to appeal sexually to the audience but don’t necessarily have an awareness or control of that fact within the story), and also because there’s some deck stacking going on.

Make no mistake, Akio’s built his surroundings to his liking. Nemuro, an adult regressed to the adolescent Mikage in the realms of the fallen prince’s playground (purgatory, prison, or whatever it may be), is proof enough of that. Akio’s chief joy is having power over others, and giving them the potential to attain their own (supposed) desires is a negligible side effect of being able to control them on multiple levels. Once we realize his game he’s a terrifying figure, more so for the fact that he’s still difficult to resist even with that knowledge intact (making him something of a pinnacle of Lucifer figures). He’s a predator, something this school hasn’t faced before. For all Touga’s harmful emotional manipulation, he’s still as much a child as the other characters. Akio, though, is going to be a whole new ballgame – the crushing weight of the old system trying to suffocate the new, and make its victims think that’s what they wanted all along.