It is not an infrequent barb thrown by Evangelion’s detractors that the show is needlessly bleak, or pointlessly cruel. And when I hear that I laugh and laugh, not because it’s untrue (though I’d argue it is) but because those people have clearly never sat through a Lars Von Trier movie. Those lucky bastards.

At any rate, let’s draw a distinction between a story that explores bleak themes and a story whose philosophy itself is bleak. The former might put its characters through hell, and it might not even have an ending that we’d necessarily call happy (at least in any conventional sense). But it’s structured in such a way that the audience is meant to learn something positive from it. A bleak philosophy, by contrast, exists merely to point a camera at violent, dark, or distressing subjects for their own sake. The difference between handing someone in a shovel to clean up dog poop and tripping them so that they fall in it, you might say.

He’s infamous for his dark, bitterly nihilistic films; his showy attempts to stir controversy around himself and his work, and for being one of the founding members of the rigorously naturalistic Dogme 95 movement (despite not actually following its rules often at all).

I can’t think of a single better case study in a story with bleak philosophy. Take a film like Dancer in the Dark, about a woman trying to save money for her son’s operation while refusing to tell anyone about it or the fact that she’s slowly going blind. That means that when she sorta-accidentally kills the guy who steals her savings, it’s a long and completely pointless martyrdom to the noose, grim and grueling and completely avoidable at several plot junctures.

Nothing dreadful ever happens in a musical. Unless you’ve seen one after 1940.
Like Cabaret, the MOVIE YOU PULLED THIS JOEL GREY CAMEO FROM

It’s a film that’s deeply unpleasant, buoyed by a few extremely strong performances and music that’s intriguing if not grandly hummable. But at the end of the day, there’s nothing to be learned from it. Protagonist Selma is a good person suffering pointlessly, surrounded by people who are cruel or clueless or simply powerless. And what are we to take from it? That life is a process of suffering, perpetuated by fools and petty crooks, and that the best escape is personal delusion or death? That good people are destined to suffer?

To be fair, I actually respect Dancer in the Dark a fair bit, if only for Bjork’s absolutely heroic performance in spite of Von Trier’s reported harassment (which was so traumatizing and awful she then left acting). Let’s go one deeper – Breaking the Waves is an ideal subject, a Von Trier film that is as corrosive, misogynistic, and upsetting as it is ugly to look at.

To wit: a naïve woman from a puritanically cloistered society marries an outsider man, who not long after their marriage finds himself paralyzed from the neck down. Believing she caused his injury by praying for him to be home more, our heroine won’t hear of a divorce and vows to love him forever. And because this is a Lars Von Trier film and everyone besides the heroine (and possibly her bff) is monstrously awful, her husband decides the best way to get her to move on is to tell her she can keep him alive by sleeping with other men and then coming back to tell him about it. Go ahead and make up for yourself how she gets ostracized and murdered, it’s bound to be more pleasant than sitting through the real thing.

Best case scenario, we take from this that ‘religious oppression of female sexuality is damaging’ or we head back to ‘good people are too good for this foul earth full of foul people.’ The first doesn’t even hold up, since Bess (the victim, heroine is far too unfitting a term) clearly doesn’t enjoy any of the sexual encounters she has outside her marriage. So the blame lays as much on her husband for thinking he knows better than she does as the villagers for ignoring her pleas for help.

So…that self-determination is important above all things, a la Clockwork Orange? Nope, because all Bess wants is to take care of her husband while completely ignoring her own health, and is emotionally unstable and codependent for all her kind innocence. So we watch a woman suffer for over two hours (I do it for you, readers) to no end other than to say ‘humanity is disgusting, and it will purposefully or accidentally destroy every scrap of goodness that might exist in this world.’

And what is the audience to do with that? Sit back and nod, feeling satisfied with themselves for having cleverly deduced the obvious ‘truth’ that life is full of shit? How adolescent. How much more simple than attempting to grapple with the world and find the light within the pain. It’s nothing but masturbatory at best and petrifying in its pessimism at worst (let us not get into Melancholia’s romanticizing of the wretchedness of depression – Kyle Kallgren has already done it beautifully anyway). That, friends, is what it means to say that a story is bleak.

What Evangelion represents is something else entirely (I mean, except Komm Susser Tod – that would be right at home in a Von Trier movie). Don’t get me wrong, the show clearly takes a certain glee in showing us a vibrantly lifelike cast right before it shatters their lives to pieces, but it’s cruelty with a purpose: ham-handed or not, the entire purpose of the TV finale is to show how a person might dig their way out of the crushing despair they’ve found themselves trapped in.

It tells its audience that it is possible to like yourself, to overcome your fears and hangups (even if that answer is phrased in the pseudo solipsism of ‘you’re the only one who shapes your reality, and there is no truth). Plenty of people have found hope from those words, and I don’t want to take that from them. It gives us Shinji’s despair to reassure us, in its way, that he (and we, for I’ve always held that those of us drawn to Evangelion are prone to a certain Shinji-like disposition) can get better even in the face of apocalypse.

But it’s not the only one. End of Evangelion, for all its doom and gloom and peppy pseudo-suicide ballads, is its own manner of life affirming. Think of it as a kind of next stage to the ideas introduced in Eva TV- while it can be a comfort to make one’s own reality, and sometimes even a necessary retreat for many, it’s not something that can be sustained. Eventually we all have to come back to reality if we truly want to live – whether that’s coming out of a sea of tang or out of the stories that reassure us.

And that recurring theme about people’s inability to understand each other, which is the very thing that drives the events of the plot proper (or at least Gendo’s part in it)? It doesn’t wallow in that either. Shinji is guided out of the hell of Instrumentality by people he loves, but also by symbols of hope. 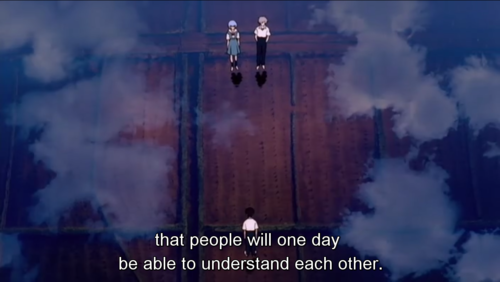 I like to think of this scene as ‘Apocalyptic English Majoring’
(I tragically lack this DVD and Youtube was failing me, so I snagged these here)

Even if things are terrible, or difficult, or endlessly painful, it’s worth living in the world for that hope. Even when people are frightened and cruel, there is always an undercurrent of humanity that manages to surface – hence Asuka’s hand on Shinji’s face, even as he’s attempting to kill her. Even as she says (quite justifiably) that she’s disgusted. The struggle of the human experience is drawing that kindness out of the painful loneliness and fear, which will always be worth it even when it seems insurmountable. That, at the end of it, is what End of Evangelion is.

Even if one takes a nihilistic reading of the film, it has purpose in the way it directly interfaces with ongoing issues in the otaku community and about toxic masculinity, turning on the audience in order to shine a light on behavior with real-world consequences, and to speak on issues directly experienced by the filmmaker. Even if viewed as devoid of light, there is purpose to it as a societal document meant to inspire change rather than simple shock and outrage (even if that’s how it was received–no, I don’t really take to the “it’s just trolling” theory of EoE).

So we have two famously ‘dark and edgy’ corners of the art house world – one I love and one I abhor. It comes down to the question of ‘why?’ Why are you showing the audience this thing, and why is it an important theme to explore (and why right this second, in this context)? In this case particularly, it comes down to hope.

For all that it’s harsh, or dark, or occasionally punishing, Evangelion is an unbelievably hopeful series. It believes the insular souls it’s critiquing can grow and change, that human nature is not locked in self-defeating behavior (and even if it is, we can and should fight against that to reach one another). It’s a far cry from Mr. ‘humanity is doomed and cruel and petty, inevitably and unchangeably. Now look at it, and despair. When I feel like it there will be nice cinematography.’

I guess what I’m saying, writer types, is don’t shy away from discussing things that are dark or disturbing. But ask yourself how the audience can change for the better by looking at it, whether it’s something they can do or a behavior they can address – and if you can’t answer that question, you’re not ready to talk about it yet. Your audience deserves at least that much.

Yay, you made it to the end! Your analysis and closure is in another castle, Shinji!
You can do it!

Tagged as: Anime, Breaking the Waves, Dancer in the Dark, Do This Not That, End of Evangelion, Movies, Neon Genesis Evangelion, Reading into Things Again