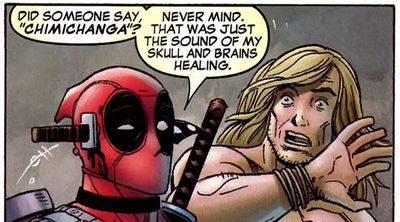 Hey, did y’all see the test footage that’s been floating around recently? With Ryan Reynolds as Deadpool, having a merry time picking off thugs on a freeway? The incredibly painful footage (and by ‘painful’ I mean that I spent years quashing down my fragile, often battered hopes and now they’ve all come rushing back again)? Well, scroll down a bit and you can say you have.

If you are currently either weeping, drooling, or keening lowly whilst wearing a shocked and catatonic look on your face, then welcome Marvel fans! For those with average to unenthusiastic interest in superheroes, Deadpool is a mercenary created in the 90s by Rob Liefeld (he of the impossibly swaybacked women, tiny feet, and pouches), originally a ripoff of Teen Titans’ Slade Wilson/Deathstroke who came into his own under the writing of Joe Kelly and Gail Simone.

Said ‘own’ is as follows: Wade was an amoral merc who got cancer and donated himself to the Weapon X project in hope of a cure. Weapon X injected him with Wolverine’s healing factor, which turned out to be a bad idea since it means the while Wade was basically unkillable the cancer was constantly attacking and healing over, leaving his body a scarred mess and his brain likewise. That would be his major gimmick: Deadpool’s insanity makes him aware of the fourth wall. 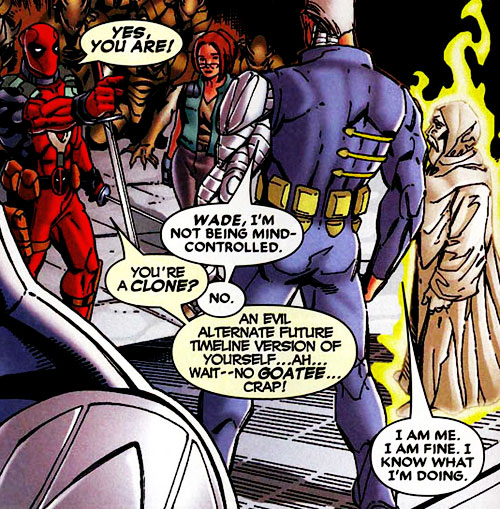 A Deadpool movie has been the stuff of legends since the abysmal X-men Origins: Wolverine featured ten watchable minutes of Ryan Reynolds as Wade Wilson, if not longer. And while I’m prepared to fork over money for two dozen tickets to the thing right now, I’m often uneasy about whether this movie is a good idea.

Deadpool’s been a cult darling since the late 90s, and in the last five years or so he’s taken over Wolverine’s spot as Marvel’s shameless promotion centerfold – i.e. the character most likely to be snuck into one or two panels of a comic and advertised mercilessly in the hopes of raising sales. As such, he’s had a myriad of different writers, miniseries, ongoing series, and crossovers, to the point of being a bit ridiculous (I draw the line at Deadpool Corps, which had Fempool, Kidpool, zombie-headpool, and dogpool and was sort of the nauseating definition of overindulgence).

And the problem with so much exposure is that it tends to sandblast away some of the character’s subtleties, meaning more pop-culture jokes and talking to suddenly existent voices in his head and less focus on character development to pin down the wacky hijinks. At its worst Deadpool is a crutch of bad, unoriginal meta jokes and inconsequential explosions interspaced with randomness and (depending on the book) boobs/turds/what have you. Which is a shame, because at his best Deadpool is one of my favorite comic book characters, and (to finally work around to the title of this essay) there’s nothing I’d love to see more than a Cable & Deadpool movie.

Cable & Deadpool (which was later rereleased with the names switched, on account of that marketing plague) was headed up by writer Fabian Nicieza and ran from 2004-2008. It holds a special place in my heart as the series that convinced me to give a damn about superhero comics rather than solely their adaptations (a damn that was severely deflated by Daniel Way’s run on Deadpool and the New 52, but that’s neither here nor there). Because besides being a pretty great action-comedy thing that didn’t shy away from character development, it also found a groove that balanced Deadpool out perfectly.

The straight-man/wisecracker combo might not be new, but it’s also far from tired, a fact C&D knows well. It doesn’t rest on the fact that Cable (who’s the telekinetic half-cybernetic future son of Jean Grey – kinda – and Cyclops, come back to ensure his horrible future never comes to be) is uptight and unappreciative of Deadpool’s hilarious quips. Rather, Cable is frustrated that Deadpool can’t be trusted with any manner of responsibility, either because he can’t focus or because a sufficient amount of money has been thrown his way.

And Deadpool isn’t just ribbing at the stoic guy, he’s both inspired to wish he was just a little nobler, and really frustrated that Cable’s overwhelming and patronizing messiah complex prevents him from paying any attention to other people’s needs or thoughts if they don’t align with his own (‘no no, it’s fine that I’ve been lying and manipulating all these people and breaking international law, it’s for the greater good’).

It creates a comedic baseline that also allows for emotional development, whether it’s by-the-books buddy comedy bonding or subtly shredding stuff like Deadpool’s anger at being physically incapable of controlling his murdery impulses despite those burgeoning better urges (it’s also probably the least teeth-grittingly painful of the mandatory Civil War events).

So the duo balance each other out, have shades of subtlety above and beyond their genre, and come from a typical emotional arc that would lend it well to Hollywood’s unrelenting hard-on for the three act structure. It’s a story that’s fairly easy to adapt, compartmentalize (start with the attempted assassination and trawl on up through the beginning of “bodyslide by two” and you’ve got a nice movie going), and fit within the current wave of hero movies (because in this fantasy of mine, FOX stops being tightfisted pedants and plays ball with the Marvel Cinematic Universe). But there is one more thing. One more factor that demands for this movie to be made.

That factor is Bob of Hydra.

Bob is a fairly low-level Hydra minion accidentally kidnapped by Deadpool and later adopted as his kind of minion-pet-friend. He’s the closest to the moral one of Deadpool’s group of associates (excluding Cable & co.) and has a tendency to compulsively blurt out HAIL HYDRA.

For those of you who saw Captain America: The Winter Soldier, please try to tell me that adding this character would not improve future Marvel movies by 1000% percent based on that description alone. Bob isn’t just an endearing sidekick, one who opens a unique and also horrifying window into how terrifying Deadpool’s mercurial personality can be for the non-powered.

He’s also a great in for folding the theoretical movie into the tapestry of existing canon, and giving the characters a reason to interact with the goings on of other movies down the line (because if there’s one thing Marvel’s proven capable of doing, it’s playing the long game). Not to mention the very canon tension that Cable’s messianic aspirations caused the Avengers. The possibilities are quite endless, and have the added benefit of banking on an extremely popular character.

I guess what I’m saying is, while I’ll end up seeing whatever movie we actually get, because I am part of the problem and all these years of anticipation compel me, I’m afraid of Deadpool’s quirks being overindulged with nothing to anchor them. That fourth wall gimmick is not unlike writer crack at most times – heady, exciting, addictive, and causative of decay and deterioration after prolonged use.

Oh, and there’s also this incidental-but-also-kind-of-not character trait. Which I bring up solely out of a desire that it not be aggressively rubbed out of those theoretical future films. I’d call it paranoia of erasure if I didn’t have a nice, long list to point to already (let’s start with Constantine and Mystique and work from there, just for fun).