I Missed This Show, and You’re Not Helping – a Sailor Moon Essay

Today I watched the JJ Abrams Star Trek of anime. Alright, that’s unfairly cruel. I watched a money-minded reboot of an integral part of my youth, which was well cast, and extremely pretty, and missed the ball spectacularly most times it tried to change something.

So I watched the JJ Abrams Star Trek of anime today. Now, on the one hand this rerelease means that those of in the States are actually getting legal Sailor Moon again. Toei’s been clinging tighter to those expired rights than Seth McFarlane to cut-away gags, and it’s nice to know that a younger generation will have the option of binging on the classics once they’ve dissolved the sparkly cotton candy this season is offering.

If I know my anime, that expression means you’ve been fatally stabbed somewhere

Now, let’s be fair. I might have woken up on Saturdays as a kindergartner and made blanket forts as part of the long-held sacred ritual of watching the horrendous Saban dub (even now it is a struggle not to unconsciously type Serena). I might have religiously scoured the Kmart sales rack for leftover merchandise our family could afford, and still to this day own a Sailor Uranus doll and a crescent wand. It’s entirely possible Zoisite and Kunzite, and Haruka and Michiru were the first queer couples I was exposed to in media, even if I was not yet aware of it (though they were my respective favorites of each of their seasons). All of that does not mean I can’t say nice things about the remake. The fact that I was fairly lukewarm to the manga might, but I promise not to let that get in the way. Actually, there are a few things that the remake really improves upon (I won’t be following it week to week – that’s not this blog’s MO – but I did want to touch on some points of interest). Also GET OFF MY LAWN

There’s an efficient level of streamlining going on – we get the characters who were introduced in the original premiere, but also Usagi’s fondness for games and her part-timer crush, the moon princess dream, and a hint of Ami in the final moments. On the one hand it’s easy to lay track when you have two blueprints in front of you, but that’s not fair – the pacing of the script is pretty good about nodding out things we’ll need to know without either dragging or feeling too forced.

Speaking of forced, the new script also tones down the giant chunks of exposition regarding Jadeite’s mission and doesn’t show Beryl at all, letting the villains unfold slowly and with a certain amount of effective menace (mostly. Hold onto that thought). Jadeite’s scene in general has an excellent sense of atmosphere, that scene being the one time where I truly felt the improving effect of the shiny new budget. The soundtrack (I was initially pretty lukewarm on the new opening, but also found myself listening to it on repeat. So.) is also an improvement – well orchestrated and subtly placed enough to boost scenes without becoming obnoxious intrusions (the original had the occasional case of ‘dialogue, dialogue, WHERE DID THIS MUSIC COME FROM’).

I also mightily appreciated the removal of Tuxedo Mask’s interference in the fight. Not only does it give him a sense of neutral ambiguity that gives him some intrigue to his ominous standing until it’s time to step up as love interest (Mamoru being a high school student is the greatest change of all, since we no longer need to call the cops on Usagi’s behalf), it gives the moment back to Usagi in a critical way. There’s only so much you can do with her early characterization, but the hypersonic scream is a clever touch of accidental cleverness that keeps her from needing to be saved. She’s a superhero, after all – it’s nice that we’re given to believe she can do this from the start, even if she stumbles a bit.

All the childhood nightmares are coming back to me. In HD

Now, about the other stuff. For the most part this is a beat for beat rewrite of the 1992 pilot, so there’s not much to talk about in terms of overarching changes. But there are some little things that plant a skeptical seed in me (at least enough to mellow out the positive changes above to a slightly suspicious ‘eh’). The thing that struck me powerfully, without having watched the original in years (I went back to review my hunch afterward) was the change to Luna’s introduction scene. Originally Usagi comes across some kids terrorizing a cat and comes to its rescue. Newsagi…trips. Because Luna was in the middle of a really good nap, I guess (she does mention the kids putting on the bandaid later, but we never see them).

Over a decade without having seen this episode, and this scene still managed to strike a wrong chord. Not only does Usagi saving Luna set the plot in motion, it’s originally a huge establishing character moment for our heroine. She a clumsy crybaby who’s not especially interested in school and maybe even comes across as a bit shallow…but seeing a suffering animal moves her so much that, despite being late and tired and easier to walk on by, she doesn’t hesitate to run to its rescue. In that moment, we know Usagi will be a hero. More than when she runs to save Naru, even. It’s brave to rush into harm’s way for a friend. But it takes a special kind of nobility to risk your own safety for the sake of total strangers. Even if it’s just a child taking care of a cat, it’s an important thing for us to know. It’s a reason to invest in Usagi.

That just makes me so tsun

Second up is Naru, a character I always found to be an especially endearing example of the ‘sweet and clueless normal friend’ (and part of a personally beloved subplot I’m preparing for them not to adapt in Crystal). Naru doesn’t have much to do in this episode besides play plot device – a lot of her original exposition is given to nameless students, she sort of vanishes once the monster’s attention is off of her, and she’s just…not as good a friend somehow. New-Naru seems to be the Cool, Together Friend (she’s smart! She’s pretty! Her parents are rich!) whom Usagi will secretly surpass by being Sailor Moon. She’s upset because Umino outdid her on the school test. Meanwhile, original Naru –

I miss the 90s, when styles besides ‘willowy and stretched’ existed

Naru is worried about Usagi’s feelings and her worry over the test, and goes out of her way to try and cheer her friend up. There’s also a good deal more time given to the girls’ rapport (since Naru is carrying all the exposition), so we have a good sense of and fondness for their friendship even with all the other things going on in this episode.

The new anime does replicate the famous (in my nightmares) face withering scene on the monster of the week, so props for that. It was neat to see rendered in the new animation style. Tragically, having checked that box off the animation team then said ‘eh, fuck it’ and started drawing her as a candy colored Betty White impersonator. No full head rotation, no grotesquerie that would help us understand why Usagi is screaming her head off. Actually, despite the pretty CG and pastel colors, there’s a somewhat lazy feel to a lot of the animation. Usagi’s face and body aren’t as expressive, the characters make smaller movements and have more static scenes. It isn’t ugly (everything looks competent, budget striking again), but it doesn’t burst with the same lively creativity of the original – not in a way that seeks to replicate the old jokes (which is good) or in a way that’s offering its own energetic alternative (which is bad). It leaves me worrying that this anime is going to coast, to cash in the nostalgia dollar and the Now More Manga-Like tagline without actually trying to be innovative or memorable animation. 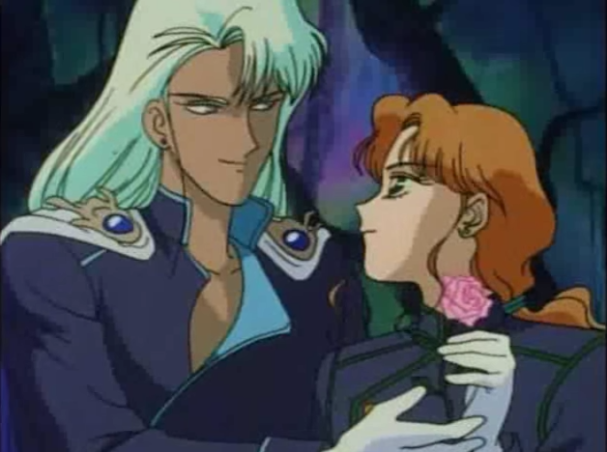 Y’all wish you had minions this fine

And yes, more ‘true’ to the manga or not, I dread the loss of Kunzite and Zoisite. I dread the loss of representation, villainous or not (albeit villainy where said relationship is their major sympathetic point), in an era where it’s easier just to cash in on the noncommittal implication of homosexuality. I dread the implication of the matched sets between the generals and the guardians, a trope that grates on me with its forced, cliché attempt to resolve things into a pretty picture whether it’s sensible or not (our heroine has a long lost past love? Wouldn’t it be great if all five of them did, coincidentally in the same place?). I dread the almost parceled surety that losing one would also mean losing Naru and Nephrite’s subplot, which (the show’s love of creepy age differences aside) was a truly heartfelt and tragic affair. I dread losing the little moments that humanized the villains without even needing to add the ‘totally brainwashed’ layer on top (though that’s an admittedly intriguing backstory). Perhaps ironically in an essay dedicated to mourning adjustments to nostalgia, I dread the loss of change, and the new era of unremarkable remakes this might unleash.