Dear readers, we stand this week on a precipice. Here do we plunge into the surreal madness that lurks at this show’s core. Here we reach the character that I want to talk about most of all, wretched and pathetic and fascinatingly heartbreaking as he is. Shall we? 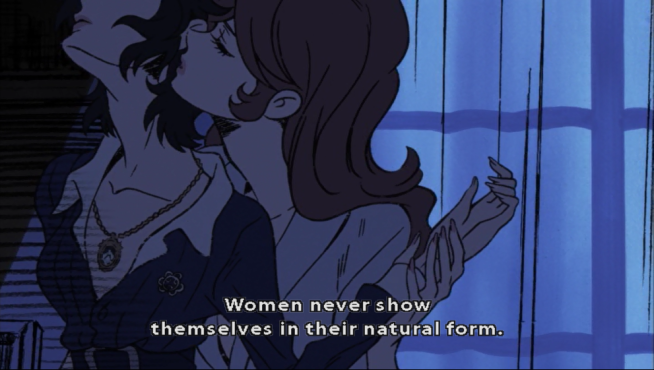 LAYERS. SO MANY LAYERS.
It’s terribly interesting that the series’ most sensual scene shows little to no skin

Episode Specifics: Fujiko has disguised herself as the teacher of an all-girls academy (one presumes a Catholic school, given the uniforms and chapel and general familiarity with anime tropes) in the hopes of stealing a highly valuable pendant from the new transfer student. Unbeknownst to her (or is it), the police intercepted that girl long before the game began, and offered up their own bit of disguised bait. Thus are we allowed our first peek into Oscar’s mind, and find it a dark place indeed.

Is that lunchbox filled entirely with shaved ice?

This episode contains enough visual homages to Revolutionary Girl Utena for one to drown in: Angelica, the jealous leader of the schoolgirls who looks uncannily like Nanami; the hillside lunch scene, the exactly-similar greenhouse; and the many, many roses dotting the campus. It’s an intensely appropriate thematic tie, particularly with regard to Oscar: Ohtori Academy was a place of debatable reality (hence Oscar’s monologue about it being a dream/nightmare), a place where those unable to escape the uncertainty of adolescence were trapped. Even more importantly, Ohtori was a place of societal boxes and coffins (metaphorical and literal), in which Oscar is most clearly trapped. He is told by Zenigata that he must be a man, and claim his own destiny and desires through his actions. He is told by society that he must desire women, and that if he does not he is sick and damned. He is told that if he does indeed desire men then he desires also to be a woman, invalidating his life-long pursuit of honorable and ideal manhood. Those boxes and their expectations, at war with one another, begin to wrap a noose around his throat as the series goes on.

Secondarily, the “walled garden” academy as a place for same-sex romance is an old, old device, dating back to the earliest examples of what became the BL genre. The Song of Wind and Trees and Heart of Thomas are the two most prominent examples – stories not exactly of queerness but of complicated amalgams of friendship, love, and deep, deep damage that flowered in particularly closed environments (and the main character of Song was likewise tormented by memories, albeit true ones, of a highly abusive and controlling paternal figure). They ended, unfailingly, in tragedy, as though there was no other conceivable way of resolving such love stories (and the western films of this series’ time period were much the same in approach). Lupin, please don’t make that movie creepy for me

Lupin Lore: Because this episode is so intensely focused on the new meat, there’s not much. The most prominent is a parody of Zenigata’s famous final speech from The Castle of Cagliostro.

Suddenly Owls: A second dream appears in this episode, claiming that this story (the one we, the audience, are viewing) is the one which will reveal the “true form” of Fujiko Mine – not only a falsehood but an absurd one, based on false assumptions layered on top of false memories. This is also the second instance of the ‘totally not suspicious owl’ watching from a nearby tree, and the first time its shown to be explicitly watching Fujiko (and, as we might later guess, Oscar).

The flinch that spoke a thousand words

Oscar Watch: And we’re back to layers: of clothing, of disguise, of self-loathing and deception (aided by uncertainty as to who is being deceived). The timing of the poetry scene is no accident, nor is Oscar’s witness of the love confession. His own situation and desires are mirrored in it: that he fell in love with an older person, a teacher/mentor, at first sight; that he wants to indulge the feeling despite it being immature, despite it being unhealthy (it should be noted, and key, that the unhealthiness stems from the age and power imbalance than from the fact of it as a same sex attraction, as would’ve been the case in those early stories). The confession, in fact, eerily mirrors Oscar’s poem, with one key difference.

How are your attempts at turning it off going for you?

Oscar views himself as a sinner where Angelica does not, and she goes so far as to act on her desires. At that point, the camera comes in to focus on Oscar’s full body flinch. Whatever complicated stew of emotions are behind it, it tells us one thing clearly: he will never, ever act on his feelings. He views them as a prison by his own admission, but can neither discard nor accept them. It is the Catch-22 that defined 1960s mentalities toward homosexuality, complicated by Oscar’s desire to prove himself as a detective and thus as a man (at least to our knowledge, this is the first case he’s worked alone).

His disguise as a young woman echoes yet more of those assumptions of the period, albeit on a subtextual level: that all gay men secretly wished to be women. That’s a trap we’ll be revisiting later, but here the feminine disguise is an easily discarded thing…at first. This is the beginning of Oscar’s downward spiral, and the shaking of the very careful walls he’s built for himself. He sees Angelica’s love confession and Fujiko’s tacit acceptance of it, evoking thoughts he had always assumed to be impossible. While he is not so vulnerable as he makes himself appear, the camera takes a special interest in Oscar discarding his gloves.

Presumably they go on to play Carnegie while he is away

The gloves are his particular shield against the world, and while he is not physically endangered he finds himself made emotionally vulnerable to Fujiko’s manipulation. There’s a careful equivocation of those two going on here: just after Oscar ‘unmasks’ himself Fujiko dreams of Almeda and his ‘true’ story, a supposed truth that is really only another imposed layer (as Oscar-Isolde becomes repressed-Oscar, another shield against his true nature). As he does violence to her physically she visits the same on him psychologically, taking advantage of a vulnerability to display power over him. This sets the groundwork– the owls, the breakdowns, and the castle – for what we will begin to question later. For the fact that Oscar too is carrying those false memories.

Themes: I spent a long, agonizing time puzzling over the assault scene and its deliberate vagaries before realizing that to search for specifics was to miss the point entirely. In asking whether a rape scene occurred, by definition of physical intercourse (to use the loathsome term, a “legitimate rape”), one loses sight of the pure display of what’s going on: a pathetic, forceful attempt to display power over another human being and devalue their humanity.

The details are not so important as the starkness of emotional and physical assault – there is no ‘kind of,’ or dubious consent about it. No matter what the details were, or the fact that it began in a supposedly mutual context before the reveal, the intent was base and violent. It is easily, with no excuse or supplication appropriate or possible, the lowest moment of Oscar’s character. Objectively it is horrible, and to find a character interesting or tragic should never wipe away the weight of their actions. Romance stories, particularly in shoujo manga and BL (I have had words with the lamentable state of that genre before, and am sure I will again), are so often colored by romanticized violence that it is glossed over without thought. The violence becomes subtext, the intent the overriding factor. The very opposite is played here, with the violent intent the explicit factor and the physical details unclear. As a photo negative the scene can be nothing but sickening and uncanny, the act of a desperate and warped individual.

So you’re both terrible people, good to know
The composition of this shot is magnificent: the trees that are associated with the owls leaning in toward him, and the shadows that double as widening cracks in his psyche

The script here walks an absolute razor’s edge between these two characters, because Fujiko too turns sex into violence and uses it as a weapon: her tape of Zenigata is easily read as torture with a few words on her part, hammering home the concept that sex is inextricable from intent and consent, even as those romanticizing factors seek to confuse things (and coming back to Oscar, how often queer sexuality has been couched in terms of violence, as a by-product of abuse or prison rape or any other number of horrible attempts to ‘explain’ something that is wholly natural). Her use of sex as a femme fatale is explicitly coded, even as a line to deceive Oscar, as ‘torture’ – a fascinating bit of thematic exploration that departs sharply from the usual depictions (those being ‘wow that guy sure is lucky,’ whether he wanted that sexual contact or not}. It’s not that the script is shaming Fujiko for using sex (as I mentioned, it will go on to validate Fujiko’s choices in regards to her open sexuality), but it makes a sharp distinction between sexual freedom and the unsavory violence of sex-as-manipulation. It’s as difficult a subject to portray as it has been to talk about for the last few paragraphs. I feel the need to shower.